The young senator makes history not only in terms of race, while a determined Hillary Clinton delays the inevitable a bit longer. 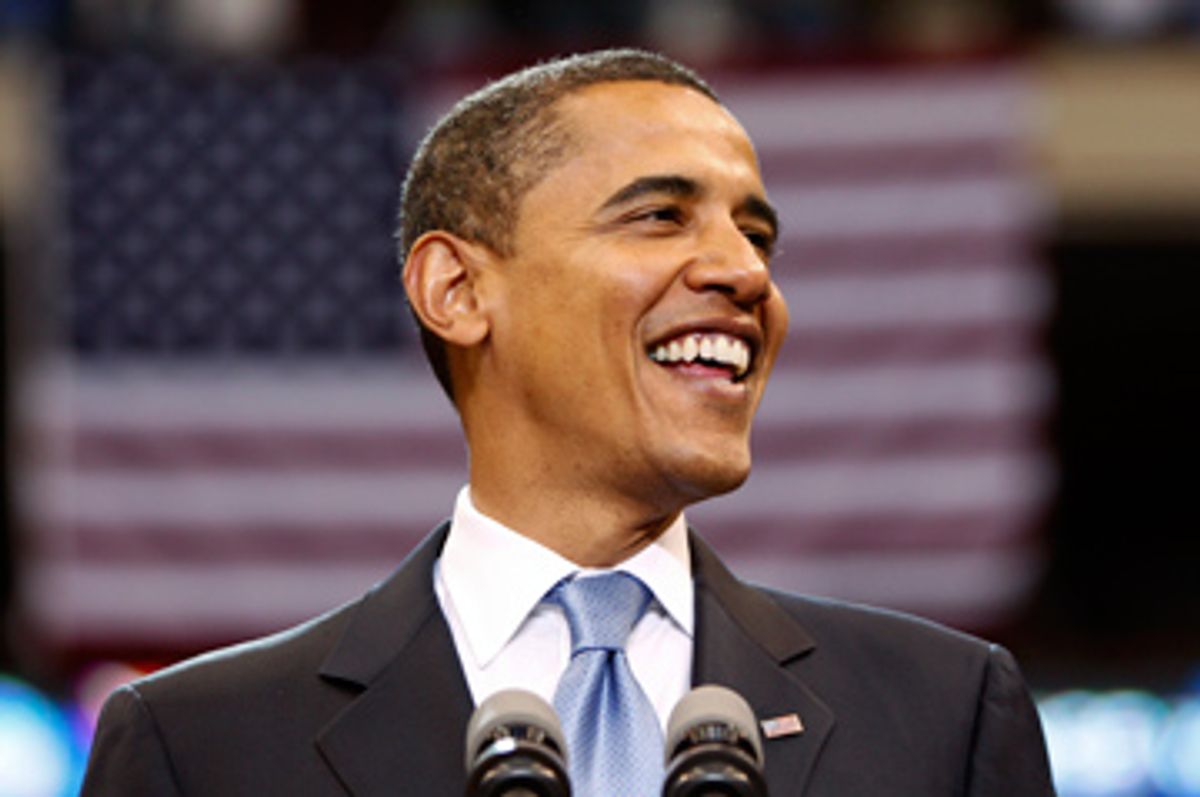 All that was missing were the confetti cannons, the balloon drop and the TV screens flashing 2,118, the magic number for a Democratic convention majority. Barack Obama declared victory in idiosyncratic fashion, with a tough general-election speech at the site of this September's Republican National Convention, and on a night when he lost a primary (South Dakota's) most had expected him to win. (He won Montana's contest.) The first-term Illinois senator was propelled to the nomination by Tuesday's rush of support from superdelegates, those members of Congress and party insiders who once were purported to be an undemocratic cabal out to rescue Hillary Clinton.

The 2008 Democratic race has been going on for so long that it seems to have begun back in the days political reporters hammered out their stories on stone tablets. The 50-state gantlet (plus every entity from Guam to Democrats Abroad) has been a festival of inclusion with 35 million voters casting primary ballots or showing up for caucuses. But this long march has left Democrats and reporters alike numbed with Novocain. The front-runner's cloak that was placed on Obama's wiry shoulders the night he won the Jan. 3 Iowa caucuses has grown tattered during the endless days on the road.

The historic nature of Obama's victory is portrayed in racial terms. But Obama will join William Jennings Bryan (1896), Woodrow Wilson (1912) and Jimmy Carter (1976) as one of the rare Democrats nominated for president in the heady first years of their appearance on a national stage. Five years ago, Obama was a little-known Illinois state senator embarking on an uphill race for the U.S. Senate. Think of all the ambitious Democrats who have eyed the White House in this decade -- John Kerry, John Edwards, Howard Dean and all the rest -- and realize how Obama just blew past them without ever working up a sweat. This is an up-from-nowhere narrative that puts all modern politicians to shame. Even though Obama's cool charisma often evokes memories of John F. Kennedy, JFK had spent 14 years dabbling in Congress before he ran in 1960.

This may be a Baedeker to the alternative universe that Clinton and her most loyal supporters still occupy. By every conventional reckoning, Hillary Clinton should be the Democratic nominee. After she stumbled in Iowa, she miraculously came back in New Hampshire. On the ropes after Obama's February sweep, Hillary came back with double-barreled wins in the Ohio and Texas primaries. Her husband's political legacy, her initial fundraising advantages, her tireless self-discipline and her success in putting her impossible-to-defend vote on the Iraq war in the rearview mirror all should have provided the stuff of victory.

Instead, Hillary Clinton was onstage in a small college gymnasium here Tuesday night trying to snatch the illusion of victory out of the reality of defeat. There were no tears or visible dejection from the candidate, the red-faced Bill Clinton or her supporters. In fact, there was a jaunty feel to the whole evening, a little like the presumed mood in the first-class bar on the Titanic right after the ship bumped up against the iceberg. At the beginning of her farewell-to-the-primaries speech, Hillary praised "Sen. Obama and his supporters for the extraordinary race that they have run." But her tone was not that of a concession, but rather that of a victor offering a few kind words to a vanquished foe.

Yet Clinton, who spoke without a teleprompter or visible notes, finally acknowledged the specter in the room when she said, "I understand that a lot of people are asking, 'What does Hillary want?'" Her answer began with a list of policy positions that Obama and virtually every Democrat would eagerly embrace: "I want to end the war in Iraq. I want to turn this economy around. I want healthcare for every American." Then in the most revealing sentence of the evening she said, "And I want the nearly 18 million people who voted for me to be respected, to be heard, to be no longer invisible."

No matter how practiced the politician, no matter how impenetrable the mask, no matter how loud the applause, in the end it all comes down to Aretha Franklin and R-E-S-P-E-C-T. By almost every reckoning (pledged delegates won, popular vote in the primaries), this has been an extraordinarily close contest, even though, as Clinton rightfully noted, "the pundits and the naysayers proclaimed week after week that this race was over." Make no mistake, there has been a snarky tenor of criticism about Clinton's determination to stay the course through all the primaries. Every other presidential dreamer in her position had taken the fight to the convention (Ronald Reagan in 1976, Ted Kennedy in 1980, Gary Hart in 1984), but she has been demonized for hanging on until the first Tuesday in June.

All of that is now moot. Clinton seems determined to follow her own timetable ("I will be making no decisions tonight"), but the impatience of the Democratic Party's leadership probably means that the duration of her active candidacy is measured in hours. (She may be entitled to an extra day of deliberation because Wednesday is the 89th birthday of her mother, Dorothy Rodham.) There are those close to her who are determined to carry on -- all the way to Denver -- if she gives the signal. But far more likely is Hillary Clinton's rendezvous with reality.

As the primaries draw to a close, the only question remaining is: Who will be standing next to Obama with arms raised as the confetti cannons and balloon drops are launched for real in Denver? And it seems a plausible guess that Hillary Clinton now regards an offer for the vice presidency as a synonym for R-E-S-P-E-C-T.