Before reports surfaced that she would bow out later this week, Hillary Clinton spent the day after Barack Obama's victory campaigning for president -- sort of. 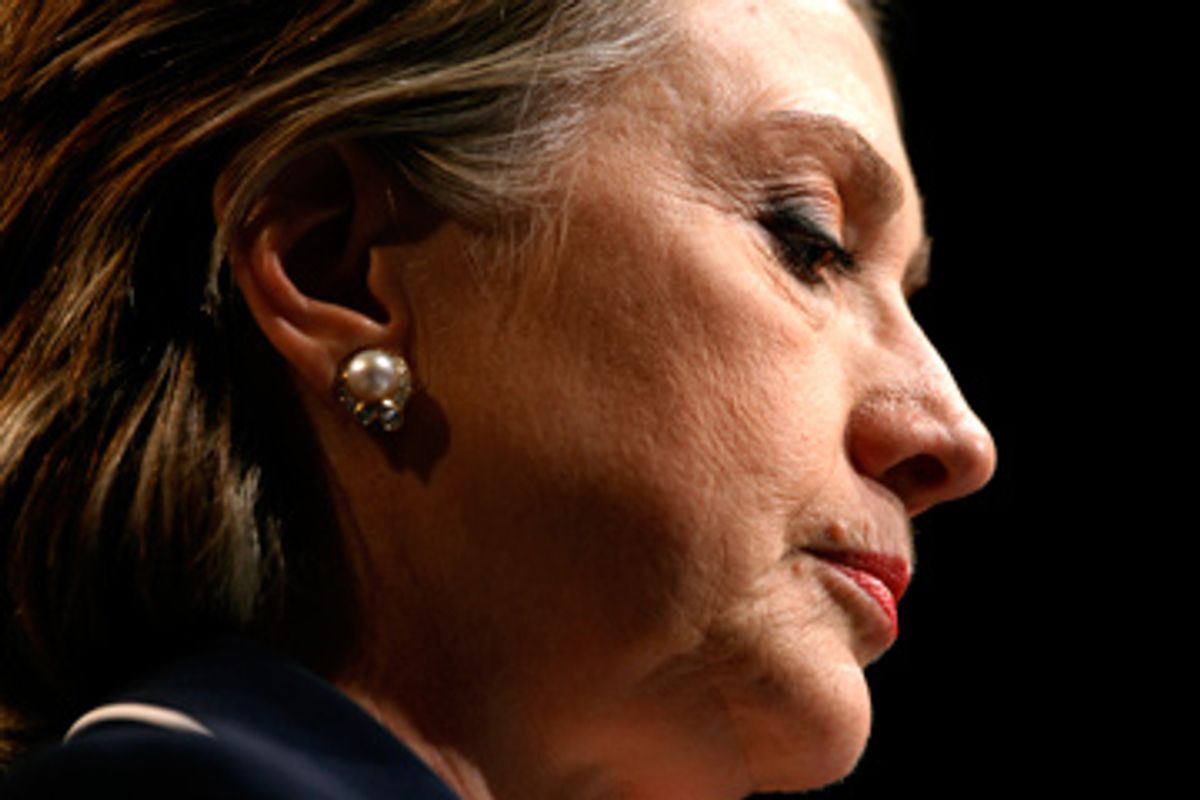 Normally, the guest of honor does not actually show up at the shiva. But the morning after Barack Obama secured enough delegates for the Democratic nomination, leaving Hillary Clinton's campaign all but officially deep-sixed, here was Clinton, giving the speech right after him at the annual conference of the American Israel Public Affairs Committee in Washington. After being introduced as "a Democratic candidate for president," she proceeded to tout her record as a friend of Israel and lay out her foreign policy vision. And her words labored oddly at a number of turns.

"Now, I know there are some who say you shouldn't be here," Clinton said early in her remarks. Was it the beginning of a justification for continuing the primary race?

It turned out she wasn't referring to herself, but to AIPAC and its critics who say that the powerful Israel lobby isn't acting in America's best interests. "I think you not only have a right to stand up for what you believe in; you have a responsibility as Americans to do so."

The speech was full of double-entendres like that, in which Clinton spoke of the valor of overcoming obstacles for a noble cause -- and it was never quite clear where she might take those lines next. (All of them steered clear of the highly volatile topic of the Democratic primary, ending up instead in the safe realm of Middle Eastern politics.)

She walked right up to the edge of endorsing Obama but didn't quite get there. "I know Senator Obama understands what it is at stake here. It has been an honor to contest these primaries with him. It is an honor to call him my friend," Clinton said. "And let me be very clear: I know that Senator Obama will be a good friend to Israel." She was clearly not preparing to join the alleged legions of her voters ready to defect to John McCain. "Let me underscore that I believe we need a Democrat in the White House next January, because it is not just Israel that faces challenges in the 21st century," she said. "America does, too."

Still, it was hard to watch her and not wonder: Why was she there, still going through with the speech, after what must have been a painful Tuesday night? (It was her only public appearance of the day, but even her Jewish constituents in New York would have forgiven her for rescheduling, as no one doubts her devotion to Israel's cause.) And why was she still being introduced as "a Democratic candidate for president," just after Obama was introduced to the same crowd as "the presumptive Democratic nominee"?

Now that all 55 elections -- one for each state, plus the District of Columbia, American Samoa, Guam, Puerto Rico and "Democrats abroad" -- are over, continuing the race isn't really a question of letting all the voters have their say. Nor is there, really, a serious hope in Hillaryland that the superdelegates who put Obama over the top Tuesday night will switch back. Her sometimes frighteningly optimistic campaign chairman, Terry McAuliffe, told Salon on Sunday that Clinton aides were making no effort at all to persuade Obama-supporting superdelegates to switch sides. But some Democrats say that if Clinton maintains the limbolike status of her operation, going much longer without formally conceding the race to Obama, she may find that she quickly exhausts the good will and patience that she (and her husband) have earned in their years of service to the party.

(Reports began to surface late Wednesday that Clinton will officially exit the race on Saturday.)

Obama, for his part, tried his best to appear unruffled by the lack of closure, even though there won't be any more elections until Nov. 4. "Following my speech, I know that you are going to have the great pleasure of hearing from an extraordinary candidate and an extraordinary public servant," Obama told the AIPAC gathering, in a departure from his prepared text. "And I want to publicly acknowledge Hillary Clinton for the outstanding race that she has run."

It was yet another glimpse of the new phase of the Obama-Clinton relationship: As he did Tuesday night, Obama was careful to show no hint of irritation that the contest his campaign has been proclaiming to be won for some time was still, officially, ongoing. Now that he's widely acknowledged to be the nominee, Obama has no reason to insist that his victory be recognized -- it is. What's more pressing for him is to begin bringing Clinton voters into his camp. It was as if he was taking his cue from how McCain had once welcomed Mike Huckabee's continuing campaign, at least publicly.

But other Democrats were in less of a mood to wait. House Speaker Nancy Pelosi, Senate Majority Leader Harry Reid, Democratic National Committee chairman Howard Dean and Democratic Governors Association chairman Joe Manchin issued a joint statement Wednesday morning, declaring the campaign over. Long undecided House powerbroker Rahm Emanuel, who worked for Bill Clinton and is close to Obama, showed up at AIPAC with the presumptive nominee and endorsed him publicly. And one of Hillary Clinton's most die-hard supporters, Pennsylvania Gov. Ed Rendell, told CNN, "Look, I am the last of the Mohicans, but it is over. I mean, I don't think Hillary Clinton is going to contest all the way to Denver. I think, very soon, she's going to do the right thing and get behind the party, get behind Senator Obama, whether she's vice president or not."

On Capitol Hill, an aide to a senior Democrat told Salon that Clinton's non-concession speech Tuesday night and her public silence Wednesday as to her next moves might not sit well with her colleagues for long. "There are some people who are like, Jesus Christ, you had to have seen the writing on the wall weeks ago, and this is now just gratuitous to continue to stand up there as if you're continuing to run for president," the aide said. "More people believe -- the general consensus is -- she has until the end of the week. The Clintons have done enough for the party over their time that they deserve that. If they need a few days, then they need a few days."

In some ways Clinton's position is unusual, of course. Even though her campaign fell short, she's still got 18 million votes to show for it, and she still commands prime-time TV coverage and the front pages of newspapers.

But this is how it goes in politics. Even if you're a Clinton, the day after you lose, your allies and enemies alike are ready to move on. The rest of the week may be excruciating for Clinton, who threw herself into whirlwind campaigning right up to the end (and even beyond, it seems), in part so she didn't have to think about how it would all end. But surely it would be better to bow out on her own terms, rather than to wait around for even her closest friends and allies to push her.