Are you too dumb to vote?

Sure, ignorance is rampant among the American electorate, as Rick Shenkman argues. But without The People, there would be no Democracy as we know it. 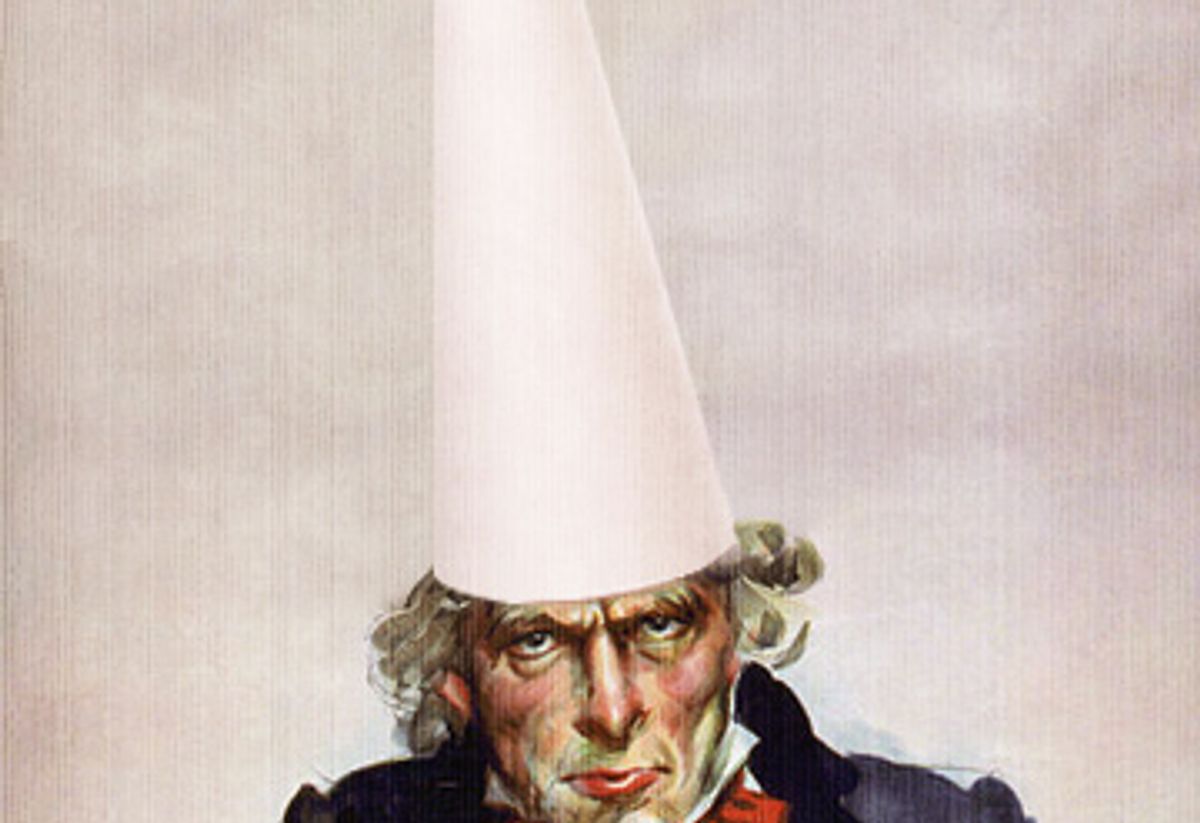 "Just How Stupid Are We?" There's no getting around the provocation of that title, and if your mouth is already forming the words, "Not stupid enough to read this book," then pause and give author Rick Shenkman his proper due. By questioning whether American voters have the capacity to think straight, he has ensured that he will never win an election and probably won't scare up a lot of readers, either. But at a time when Obama and Clinton and McCain have been hustling around the country trying to feel the common man's pain, it's oddly bracing to hear someone argue that the common man is a pain.

If nothing else, it flies in the face of a great many clichés. "The people have spoken." "The people are always right." "Government of the people ... by the people..." Well, you know the rest. Or maybe you don't. Because, according to Shenkman, Americans don't know a hell of a lot, and some of us are, by any available metric, D-U-M dumb.

"No one thing can explain the foolishness that marks so much of American politics," writes Shenkman, former journalist and founder of History News Network (hnn.us). "But what is striking is how often the most obvious cause -- public ignorance -- is blithely disregarded ... We feel uncomfortable coming right out and saying publicly, The People sometimes seem awfully stupid."

For starters, they know nothing about government or current events. They can't follow arguments of any complexity. They stuff themselves with slogans and advertisements. They eschew fact for myth. They operate from biases and stereotypes, and they privilege feeling over thinking. The result is a political system of daunting irrationality, and rational people like Rick Shenkman are paying the cost.

Don't look for things to get better, either. With the decline of political bosses, party machines and labor unions, the hoi polloi no longer have anyone telling them how to think -- even as polls, referendums and ballot initiatives place an ever greater premium on their opinions. "Nothing in our past experience," writes Shenkman, "justifies the belief that people in these circumstances are up to the task that history has now given them ... Our confidence in democracy rests on a myth."

Stated this baldly, Shenkman's thesis has the sting of novelty, but in its rough outlines, it's no different from what Alexander Hamilton was arguing more than 200 years ago. Indeed, as Shenkman usefully reminds us, our constitutional history betrays from the very start "a constant tension between faith in The People and contempt for them." Madison and Jefferson may have talked a good game, but many of the Founding Fathers lived in terror of mob rule, which is why, under the original Constitution, only the House of Representatives could be directly elected.

If it had been up to conservatives, that would still be the case today. Indeed, until Nixon and Reagan seized populism for anti-populist ends, America's right wing (the late William Buckley included) had very little use for representative democracy. By contrast, Shenkman argues, liberals actually swallowed the myth of mass wisdom and so were all the more stunned when The People turned on them for such crimes as embracing the rights of women and minorities. The upshot is that we are now "in the pitiful position that neither liberals nor conservatives are prepared to say to The People: stop and pay attention. Liberals cannot because their ideology leaves them unprepared to find fault with The People. Conservatives have not because The People repeatedly put them in power."

But are The People really such a bad bargain? We can all, of course, muster at least anecdotal evidence of American stupidity. We've seen "Are You Smarter Than a Fifth Grader?" We've watched Jay Leno flummox bystanders with the most basic questions. ("How many doors in a four-door sedan?") I know of more than one journalism professor who's been forced to quiz students on current events because tomorrow's news reporters don't actually follow today's news.

But the more Shenkman tries to define our stupidity, the more slippery it becomes. Short-sightedness is part of it, he says. Boneheadedness, wooden-headedness, good old-fashioned numbskullery. But where are the statistics to show we are living in "an Age of Ignorance"? We're told that students forced to listen to NPR for a whole hour liken the experience to "torture." Depending on the hour, I might agree with them. A study finds that 22 percent of Americans can name all five members of TV's "Simpsons" clan, but only one in 1,000 can name all five First Amendment freedoms. I'll admit I'm among the 999 -- on the spot, I couldn't come up with "petition for redress of grievances" -- but what exactly makes these fact sets worth comparing, other than that each numbers five? Is a widespread familiarity with the most intelligent and subversive comedy in American TV history really a cause for despair?

Shenkman has an equally tough time gauging our irrationality (though, again, each day brings fresh evidence). He criticizes voters for measuring economic success by employment and not productivity, as economists do. But isn't employment how the economy manifests itself to the average citizen? Similarly, Shenkman considers voters irrational for buying into George H.W. Bush's "no new taxes" pledge. Surely, though, that makes them not irrational but credulous.

And in truth, the condition that Shenkman seems to be anatomizing is not so much stupidity as malleability. Americans are very good, he says, at being manipulated and lied to (to buttress his point, he offers a brief history of political ads) and we're equally good at lying to ourselves. Is it any wonder, then, that our current president was able to ram such an ill-advised war down our throats?

But again, this won't quite pass. A sizable number of Americans opposed the Iraq war from its infancy, and a majority of Americans opposed it once it became clear the Bush administration had trumped up the casus belli. The 2006 congressional elections and the dismal state of Bush's poll rankings are persuasive testimony that the masses, one way or another, are tuned to the world around them.

At any rate, representative democracy is a hard genie to put back in the bottle. As Shenkman admits, with more than a touch of rue, "We cannot fire the American people." He holds out hope, however, that we can downsize them. Among the bizarre trial balloons he lofts for enhancing political discourse are requiring voters to pass civics tests (shades of the Jim Crow literacy tests), letting state legislatures once again choose senators, and restoring the Electoral College's historic autonomy in electing presidents.

A counter-revolution, in other words, that would roll American governance back to the good old days of Hamilton (without, presumably, rolling over women and blacks in the process). It would all be pretty alarming if it weren't so hopelessly, even endearingly, unrealistic and if it didn't arise from a fundamental misreading of the electoral process. Elections are not, despite the fond wishes of academics like Shenkman, examinations. A basic understanding of the issues is certainly an asset to a voter, but the decisions we make about candidates can't help being informed by all the things that Shenkman distrusts: emotions, hopes, values.

I tend to vote Democratic, for example, not because I've scrutinized the party platform down to the last plank but because I approve, in general, of how Democrats want to use their power. The same, I assume, holds true for many Republicans. And so the seemingly blinkered outcomes that drive Shenkman crazy -- Clinton supporters overlooking his crassness, Bush supporters overlooking his obtuseness -- can actually be seen as exercises in priority setting. We may not like what our leaders are doing, but we continue to like who they are and how they look at the world. Simply because these sentiments can't be assayed through true-false questions is no reason to deny their validity. Even in the voting booth, the heart has its reasons.