Barack Obama's candidacy spells the end of the one-drop rule and the beginning of a painful but necessary exploration of the real meaning of race in America. 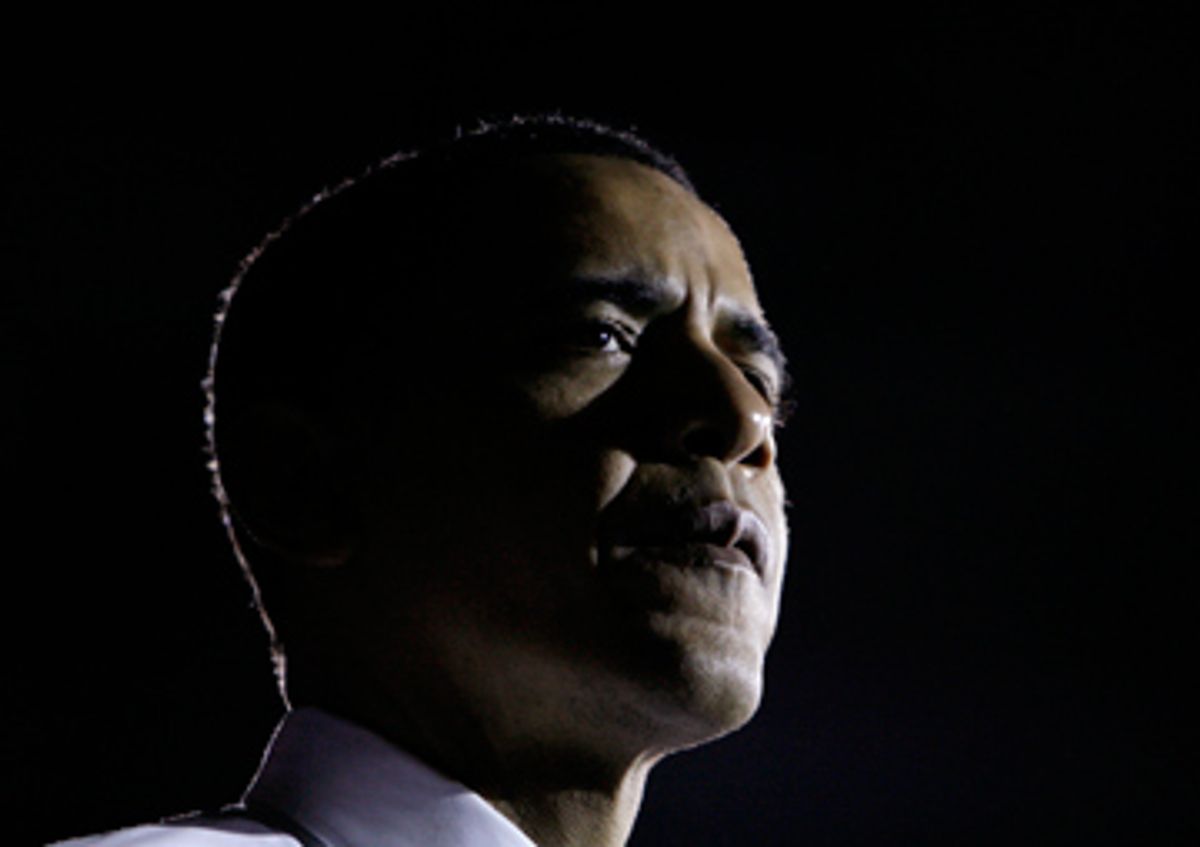 Just by being who he is, Barack Obama has made history twice. He is the first black major party nominee for president, but he is also the first mixed-race nominee. Many of the largely unspoken questions that have hovered over his candidacy concern this double identity. In the early stages of his candidacy, there was much discussion about whether Obama was "black enough" to earn the allegiance of African-Americans. The overwhelming support he has drawn from blacks has put one side of that question to rest. But the other side remains unanswered: Is he "too black" to attract working-class whites? In critical states like Ohio and Pennsylvania, Hillary Clinton clobbered him with this important demographic. Analysts differ as to the role racism played here. But if Obama is rejected by large numbers of less-educated, lower-income whites, he could lose to McCain in the general election.

I tend to agree with those, like the New York Times' Paul Krugman,who believe that race is no longer the winning political card it has been for the GOP since Nixon's "Southern strategy" and Reagan's racially coded attacks on "government do-gooders." There are clearly significant numbers of voters for whom Obama's race will tip the scales against him, but probably not enough to overcome McCain's huge handicaps this year.

It is tempting to regard Obama's success as clear evidence that American racism has faded away. Yet the truth is more complicated. Because Obama's own identity is so unusual, it's difficult to know exactly what his triumph tells us about America's racial attitudes. Of course it indicates that crude racism has declined enormously (although I'm honestly not sure whether Obama could have been nominated if both his parents were black). But Obama is not an ordinary black man. And what his success really reveals is something more complex and equivocal: that whites are comfortable with black people, but much more uneasy about certain aspects of black culture, those associated with the so-called black underclass. Being black is OK; acting black, in certain ways, isn't.

In fact, this is an attitude shared by many blacks. A 2007 Pew Poll showed that 37 percent of blacks no longer regard black people as constituting a single race, and that 70 percent of college-educated blacks said that the "values gap" between middle-class and poor blacks had widened over the past 10 years. These remarkable findings clearly reflect a growing rejection by middle-class blacks of the crime and other pathologies so often associated, rightly or wrongly, with the black underclass.

The distinction between race and culture is uncomfortable, because it's so complicated. Talking about "black cultural pathologies" sounds racist -- and it can be. Black culture is not monolithic. But out of fear, uncertainty and ignorance, whites and blacks often relate to each other as if it is -- which is precisely why Obama's success could translate into genuine racial progress. The first step toward real knowledge across racial lines is to put down the cultural masks, the perceived notions of what it means to be black or white. Obama's candidacy is seen as a feel-good Kumbaya fest that makes us all feel better, but my real hope is that it will throw us all, black, white and other, into the racial soup, forcing us to take a much deeper look at each other.

Mixed-race people, particularly those of black and white ancestry, have long been forced to navigate this complicated terrain. Their experiences show just how inadequate our traditional ways of talking about race are. As their numbers grow and their perspectives become more familiar, they will inevitably erode the cornerstone of America's racial pathologies, the one-drop rule -- the idea, deeply rooted in white racism, that any amount of black blood defines you as black. And no one will do more to undercut that racist rule than Obama.

At first glance, Obama's own racial self-definition seems to affirm this legacy of racial essentialism, not deny it. Genetically, Obama is just as white as he is black, but he defines himself as a black man of mixed race, not as someone of mixed race who is neither black nor white. Like many -- probably most --Americans of mixed black and white ancestry, he doesn't identify himself as white at all.

Obama's critics on the left and right have slammed him for not fully embracing a post-racial, mixed-race identity. They attack what they see as his racial balancing act, emphasizing his blackness on Monday and his whiteness on Tuesday. But such criticisms overlook the unique stigma attached to being black in America, and its accompanying impact on how one defines oneself. The fact is, half-black people are still usually seen as black. It's much easier to reject all racial labels when you're half Asian and half white, like me, than it is when you're black and half white.

Obama has his own set of reasons for identifying as black, some of which he identifies in his superb autobiography, "Dreams From My Father." The often painful challenges he faced in forging his identity as the son of a Kenyan father and white American mother may seem exotic and unique, but in fact they are shared by many biracial Americans. Lise Funderburg's fascinating 1994 book "Black, White, Other: Biracial Americans Talk About Race and Identity," a collection of interviews with 46 biracial Americans, reveals that mixed-race Americans, who make up at least 3 percent of the population but probably much more, define themselves in a myriad of ways. Who your parents are, your relationship with them, how black or white you look, where you grew up, who you grew up with, your personality, all play a role.

Funderburg's book shows just how broad a spectrum of identity choices mixed-race people face. Toward the post-racial end are those who define themselves as mixed and reject the labels "black" or "white" or "Asian" (or insist that both must apply simultaneously). At the opposite, more traditional end are those like Obama who embrace their black identity. I can't deny that as a mixed-race person who fits into the first category, I'd love to see a politician who refuses traditional racial labels. But that day is coming. And I don't presume to judge Obama's, or anyone else's, choices.

For race is messy. There isn't a "normal" or "right" way to be biracial, any more than there is a "normal" way to be white or black -- or Asian or Latino or Native American or any of the other labels that we more or less arbitrarily use to carve humanity up into separate groups.

One of the intriguing questions raised by Obama's meteoric political rise is whether he could have repeated it if he had run not as a black man but as someone of mixed race. It's impossible to answer, but there are reasons to think he wouldn't have succeeded. The default position in America is for someone of mixed black and white ancestry to self-identify as black: There's still a faint stigma of supposed racial self-hatred or "selling out" attached to those who refuse to do so, especially if they're politicians. Tiger Woods can get away with being "Cablinasian" because he's just a superstar golfer; he doesn't have to walk through the racial minefield as carefully as Obama does.

Of course, some of this has to do with the suspicious or hostile attitudes some blacks have toward part-black people who identify as biracial and not as black. In Funderburg's book, several of the subjects recount that they were attacked when they identified themselves as biracial: "What? Are you too good to identify with blacks?" But it also has to do with white attitudes. A mixed-race politician of black and white ancestry who did not identify as black would be attractive to many white voters but would confuse others and earn the enmity of still others (ironically, both on the far, racially essentialist left and the openly racist right) who would see him as "passing," as self-hating or just as weird.

But such attitudes are as doomed as the one-drop rule. Obama is the thin end of the post-racial wedge, the advance scout of an unclassifiable army of nontragic mulattos that is changing the way we think about race.

The fact that Obama is both black and biracial, paradoxical and confusing as it is, has already advanced America's ideas about race enormously. It's true that Obama is an anomaly, whom few can completely identify with -- there aren't that many children of black Kenyan fathers and white Kansas mothers who grew up in Hawaii and Indonesia, edited the Harvard Law Review and became the Democratic presidential nominee after just one term in the U.S. Senate. But he's an inclusive anomaly, an anomaly that everyone, black, white and other, can identify with enough to use as a conduit to talk to people they normally wouldn't.

This ability to cross borders is shared by many people of mixed race. Several of the people interviewed in Funderburg's book make the point that their experiences allow them to understand people of different races. "Sometimes I wish I was one or the other, but being biracial has made me a stronger person and has given me my own special gold card because I understand black culture and white culture," Danielle Williams told Funderburg.

The fact that Obama is both black and white, combined with his powerful synthesizing temperament, gives him a moral and intellectual perspective on race matters that few national leaders can match. In his famous speech in Philadelphia, he already went beyond standard political bromides about race. As president, he will be able to use his bully pulpit to explore the intertwined issues of race, culture and class far more deeply than any American president ever has. If he does it right, it'll make us all uncomfortable -- but ultimately bring us more together.