A British paper lures Eastwood and Lee into an unfortunate feud. Here's the real question: Which of their films should the other one have made? 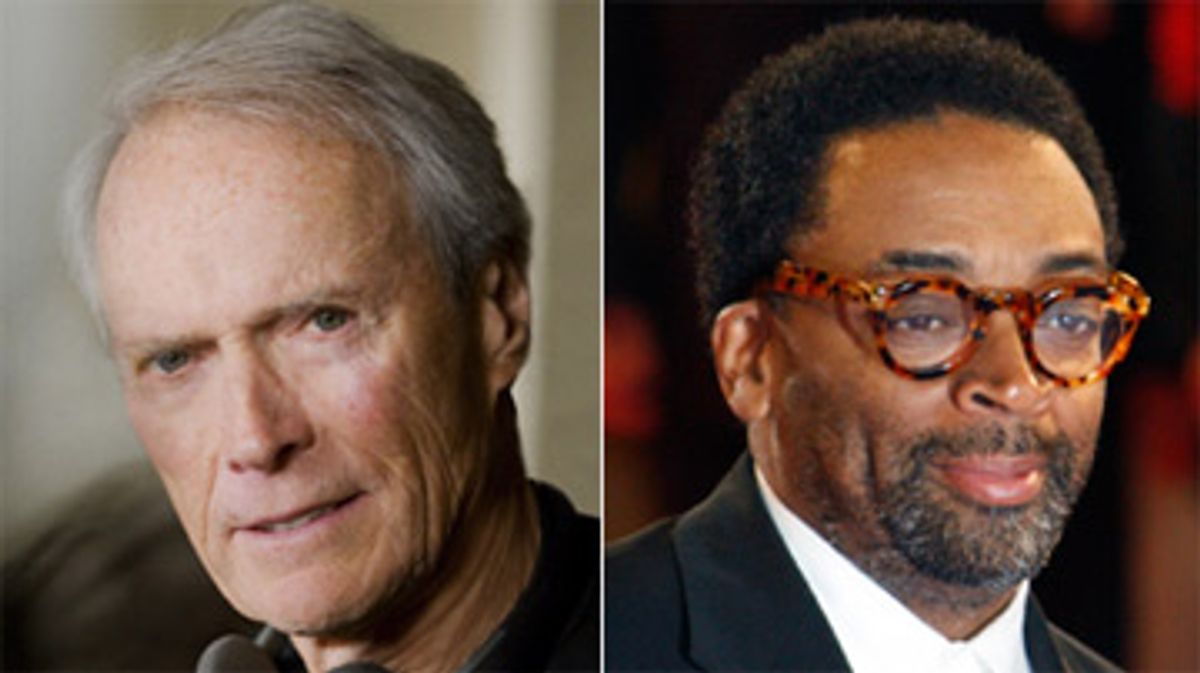 OK, I'm back. But instead of paying attention to the mountain of new releases facing me this week, or the surprising box-office success of Sergei Bodrov's Genghis Khan epic "Mongol," countering the tsunami-like summer hits "Iron Man," "Kung Fu Panda" and "Sex and the City," let's consider an irrelevant pseudo scandal.

There's been a bit of a dust-up, as the Brits say, between Spike Lee and Clint Eastwood lately, largely fomented by the Guardian (a left-leaning English daily). Among the highlights, if you want to call them that, are Eastwood suggesting that Lee should "shut his face" and Lee retorting, "The man is not my father and we're not on a plantation." The whole thing is unfortunate for all kinds of reasons, not least because it involves a British paper gleefully stirring up a racially tinged dispute between two contentious Yanks, right in the middle of our so-called season of racial reconciliation. Also because Lee and Eastwood, despite their differing backgrounds and political inclinations, are far more similar than different as old-fashioned filmmakers and storytellers.

The purported issue is of course a black-white thing, specifically the absence of any black-white thing from Eastwood's Iwo Jima double bill, "Flags of Our Fathers" and "Letters From Iwo Jima," which depicted no African-American soldiers (although several thousand apparently took part in the actual battle). The two directors crossed paths -- figuratively, not literally -- in Cannes, where Lee was promoting his new "Miracle at Santa Anna" (for sale in the Cannes market) and Eastwood had "The Exchange" (aka "Changeling") in competition. Lee's film is about an all-black U.S. Army division that fought valiantly in the Italian campaign during World War II, and since he's never averse to controversy, it was easy to draw provocative sound bites from him about the all-white military units shown in Eastwood's pictures.

"Clint Eastwood made two films about Iwo Jima that ran for more than four hours total, and there was not one Negro actor on the screen," Lee said. "If you reporters had any balls you'd ask him why."

So the Guardian's Paul Lewis did ask Eastwood, who was relatively restrained (at first) in his response, pointing out reasonably that "Flags of Our Fathers" was about the famous flag-raising photo on Iwo Jima, in which African-American troops were not involved. (Possibly, some historians suggest, because they were not wanted.) "I'm playing it the way I read it historically, and that's the way it is," said Eastwood. "When I do a movie and it's 90 percent black, like 'Bird' [his 1988 film about jazz legend Charlie Parker], then I use 90 percent black people." He acridly observed that in "The Human Factor," his upcoming film set in post-apartheid South Africa, he's "not going to make Nelson Mandela a white guy."

This may be impossibly liberal of me, but I'm going to suggest that they're both right, and that both of them need to tone down the grump-o-meter. Eastwood has no responsibility to practice affirmative action in a World War II movie, but the omission was unfortunate and perhaps telling. No one who has followed Clint Eastwood's life and career can seriously contend that he's a racist (and, in fairness, Lee didn't say he was). He is, however, something close to a radical libertarian. As inscrutable as Eastwood can be about any intellectual dimension to his filmmaking, the subject he returns to over and over again is the conflict between individuals and the debased, bureaucratic and corrupt society that oppresses them. He's not much interested in collective societal or racial issues, and certainly isn't going to go looking for them under the rocks of the screenplays he takes on.

Lee, on the other hand, is a left-wing moralist, always striving (perhaps too eagerly) to preach a social gospel under the guise of mainstream entertainment. But despite their obvious dissimilarities, the West Coast Anglo and the East Coast African-American -- viewed strictly as film directors -- are far more alike than they seem. Each is a skillful craftsman with a hit-and-miss career marked by startling flashes of inspiration. Both are clearly shaped more by the traditions of old-school Hollywood storytelling than by post-'70s cinema; they're closer to the heightened-realism mode of John Ford, Howard Hawks and William Wyler than they are to Martin Scorsese or the Coen brothers.

Their masterpieces are distinctive: Of course Eastwood could not have made "Do the Right Thing," and Lee could not have made "Unforgiven." But among their more workmanlike films, there's a whole bunch of potential crossover. Lee could have directed an interesting and arguably better alternative to "Bird." (Eastwood seems to believe that Lee still harbors a grudge that he didn't.) But he'd also have done a perfectly respectable job with more generic Eastwood fare, like "White Hunter Black Heart" or "A Perfect World." "Mystic River" and "Million Dollar Baby" would make terrific Spike Lee films. If we could cram them both into the way-back machine and have, say, the 1993 version of Spike direct the 1983 version of Clint in "Sudden Impact," the fourth and final Dirty Harry film -- well, damn, I'd pay to see that.

On the other side of the coin, Lee's "Inside Man," "25th Hour" and "Clockers" feel like potential Eastwood genre pictures all the way. ("Clockers" might be better as an Eastwood movie, but "25th Hour" not quite as good.) Eastwood's versions of "He Got Game," "Summer of Sam" and "Jungle Fever" would be totally different from Lee's, but they might be preferable in many respects. And as long as we're playing fantasy-film football, I'd be delighted to give Lee his opportunity to go back in history and make "Bird" -- as long as Eastwood gets to make "Malcolm X." I mean, come on. That's a great idea, and I won't let anybody deny it.

And now that both of these esteemed American directors have allowed themselves to be lured into a Limey-sponsored pissing match, maybe they'll hang it up and get back to what they actually do for a living. Both of them have long been known to shoot first and reflect on it later, and right after launching his "plantation" comment at Eastwood, Lee said simply, "He's a great director. He makes his films, I make my films."

Beyond The Multiplex Movies Sex And The City World War Ii