My Paulina, my country

During the making of a film about my exile from Chile, I finally met the anonymous woman who saved my life during Pinochet's murderous reign. 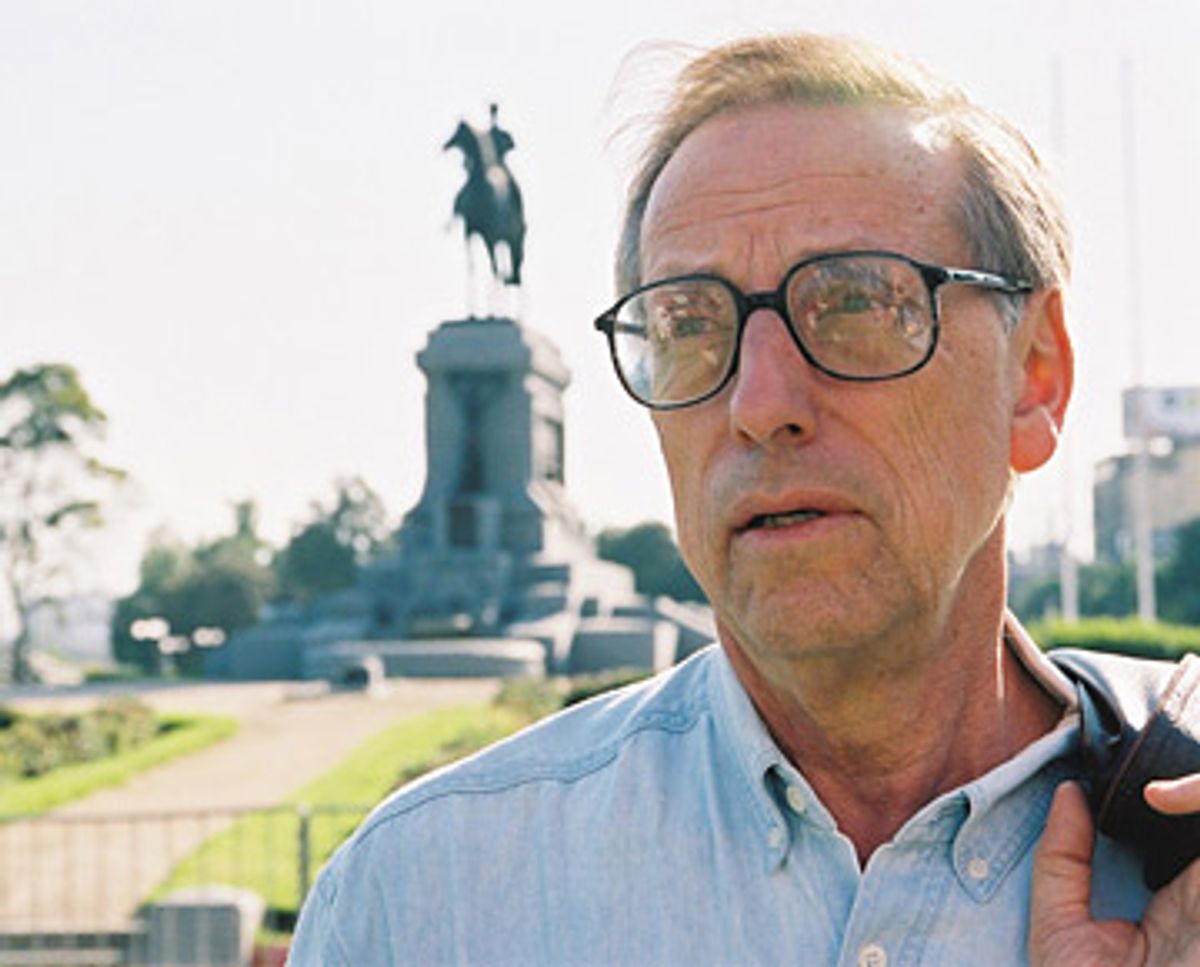 It was the end of September 1973 and the city was Santiago de Chile and I was running for my life.

Waiting to go into an exile from which I couldn't be sure I would ever return.

That's when I met that woman.

She drove up to the chalet where I had been hiding, one of the many houses where I had sought sanctuary after the coup that had toppled the democratically elected socialist government of Salvador Allende. I had never met her before and did not know her name. Only that she was part of a vast, clandestine network of men and women dedicated to saving the lives of Allendistas, only that she had found somebody willing to secretly give me refuge, only that if we were caught we would both be killed.

As we crossed the city infected with soldiers and guns and fear, I can remember, in the midst of the wild dread, a bizarre thought flashing into my mind: Hey, this would make a great flick. I couldn't help myself. I had always been a child of the movies, used to filtering my experiences through the celluloid screen of life -- humming a soundtrack even in the most perilous, the most intimate, moments. But in this case a more prudent voice inside added: A great flick, sure, if you survive to tell the tale, that is.

I did survive and I did tell the tale and now, almost 35 years later, a film has been made ["A Promise to the Dead"] recounting the story of those days and how it led to a life of indefinite wandering. At the end of 2006, the great Canadian filmmaker Peter Raymont followed me back to Chile to revisit the joys of the Allende revolution and the murderous aftermath of Augusto Pinochet's military takeover, and one of the rewards of that journey into the past was that I finally got to track down and thank the woman who had saved my life.

I had often thought of her during the 17 years of exile, and when a precarious, still endangered democracy was restored in 1990, I paid homage to her by making Paulina, the protagonist of "Death and the Maiden," someone who had salvaged victims from the flood after a coup d'état in a country similar to Chile. And I could only hope that, unlike Paulina, my anonymous rescuer had been saved from the fate of arrest, torture or exile.

But no, she was safe and she was sane -- and, as she drove me down the same avenues from long ago, retracing our itinerary, I learned her real name and the fascinating story of her life.

And yet, that story, that name, that woman, are not in the documentary.

True, the streets of a now democratic Santiago were no longer filled with soldiers, but the old fear still malingered in the air, and still continues to contaminate far too many lives. My "Paulina" did not want to be filmed, she said, because right-wing members of her family -- one of her sons, one of her daughters -- haven't the slightest inkling of her secret heroism, how she risked everything to save people like me. If her identity surfaced on a screen, she added, there would be drastic consequences to pay.

This was not how I had pictured our glorious reunion. Somewhat naively, I had anticipated that, just as she had offered me redemption from death, now the documentary crew trailing me around Chile would redeem her from an underserved oblivion.

But if the camera inhibited her advent into our film, that same camera facilitated, on the other hand, a series of other encounters that I would never have had if there had been no one present to register them -- no director persistently demanding that I face some of the pain in the forbidden zones of my past which I had until then been reluctant to acknowledge.

Unfinished business I had kept putting off.

The last time I had seen Salvador Allende alive he had been on a balcony at the Presidential Palace waving to a crowd of a million marching enthusiasts -- so enthusiastic, in fact, that my friends and I had passed by a second time, as if to say goodbye. And now the making of the film allowed me to stand at that same balcony, looking down onto an empty plaza, and measure what it meant that Allende was a mound of ashes and all those men and women were no longer down there defying injustice.

I had written at length about the invasion of our private lives, and the violation of our bodies, during the dictatorship. But nothing prepared me for the basement I stumbled upon: Where Pinochet's Gestapo had spied on Chileans, listening in on their conversations and leaving behind a warp of twisted, tangled wires arrayed in a multitude of bright colors that made them all the more perverse. An experience that sickens me right now, as I remember it, returning me to the nights when we were on the verge of extinction, when we did not yet allow ourselves to recognize what this sort of repression does to your soul, to your land.

The film also forced me to confront more personal demons. Rodrigo, my son and frequent collaborator on film projects and associate producer of this documentary, insisted that one of my obligations was to journey to the Buenos Aires of my birth and find the grave of my favorite grandmother, whose funeral I had been unable to attend when she had died in 1976. The reason then had been that it was too perilous to travel to an Argentina ruled by the military, intoxicated with roaming death squads. But why, during many later returns to Buenos Aires, had I put off paying my respects to the woman who had nourished me as a child and comforted me as an adolescent? When you are gripped by so much loss that's how you survive: by postponing every possible sorrow.

That deferral of grief comes, however, with a price. When Rodrigo and I visited the cemetery where my Baba Pizzi had been laid to rest, we discovered to our consternation that her tomb had not been paid for in decades and hands that were not ours had therefore cast my grandparents into the common ground of paupers and orphans and outcasts, the nameless territory where -- as the administrator of that memorial park wisely told me -- "we all end up anyway." And all I could pray for was that my grandmother would understand, would have understood, would forgive me for having failed her, for mourning her so belatedly.

It was not the only lesson I was to learn on this trip. Another death awaited me in Chile, one that would more sorely test me.

One morning in Santiago, smack in the middle of the film shoot, the radio brought the news that my nemesis, General Augusto Pinochet, had suffered a stroke -- from which, one week later, he would die.

We rushed to the hospital.

Exile may be full of distress, but at least it spares you the unpleasantness of having to cohabit with the minions and accomplices of the dictator. There they were, outside the gates of the medical facilities, a group of women, crying out for their dying leader, led by a small, chubby woman, lips thick with lipstick, fingers clutching a portrait of her hero, a litany of tears streaming from behind incongruous dark glasses. There she was, making a pathetic spectacle of herself for all the world to see, defending a man who had been indicted by courts abroad and in Santiago as a torturer, a murderer, a liar and a thief. That was what Chile had become: a country where this woman who had celebrated the demise of democracy -- who had rejoiced while I was being hunted down and my friends were being killed -- that woman was being transmitted and feted by dozens of cameras and hundreds of microphones, while my Paulina was still invisible, still in hiding, still suffering the terror inflicted by the general being so lavishly praised.

And yet, I was paradoxically, inexplicably, uncontrollably moved by her misery. And so, unable to stop myself, I approached the woman and told her how I had mourned Allende and therefore understood that it was now her turn to mourn her leader -- but that I also wanted her to realize how much pain there was on our side.

She seemed dumbfounded by my words, and managed to mutter something like "thanks" -- whether sincere or perplexed or both, I still cannot say. But for one illusory, transitory instant I felt that we shared a territory, perhaps pointed in the direction of a possibly different land.

Did I do the right thing?

In my plays and novels I had meditated extensively on the walls that separate us from those who have done us grievous harm. I had forced my characters to deal with their enemies and ask themselves how to avoid the sweet trap of victimhood and retribution. And I had suggested that repentance was essential for any dialogue to transpire. But when it came to real life I could not wait eternally for that repentance. In real life, I felt compelled, if only for a minute, to break down those walls myself, leap across the divide, imagine a different sort of world.

That interlude of compassion forms, I believe, the gentle core of the film. It is the sort of moment that fiction can only enviously dream of, a moment that only a documentary can ultimately capture.

I dedicate that moment to my Paulina.

May she someday emerge from the shadows.

"A Promise to the Dead: The Exile Journey of Ariel Dorfman" opens the Human Rights Watch International Film Festival, at the Walter Reade Theater in New York City, on June 13.