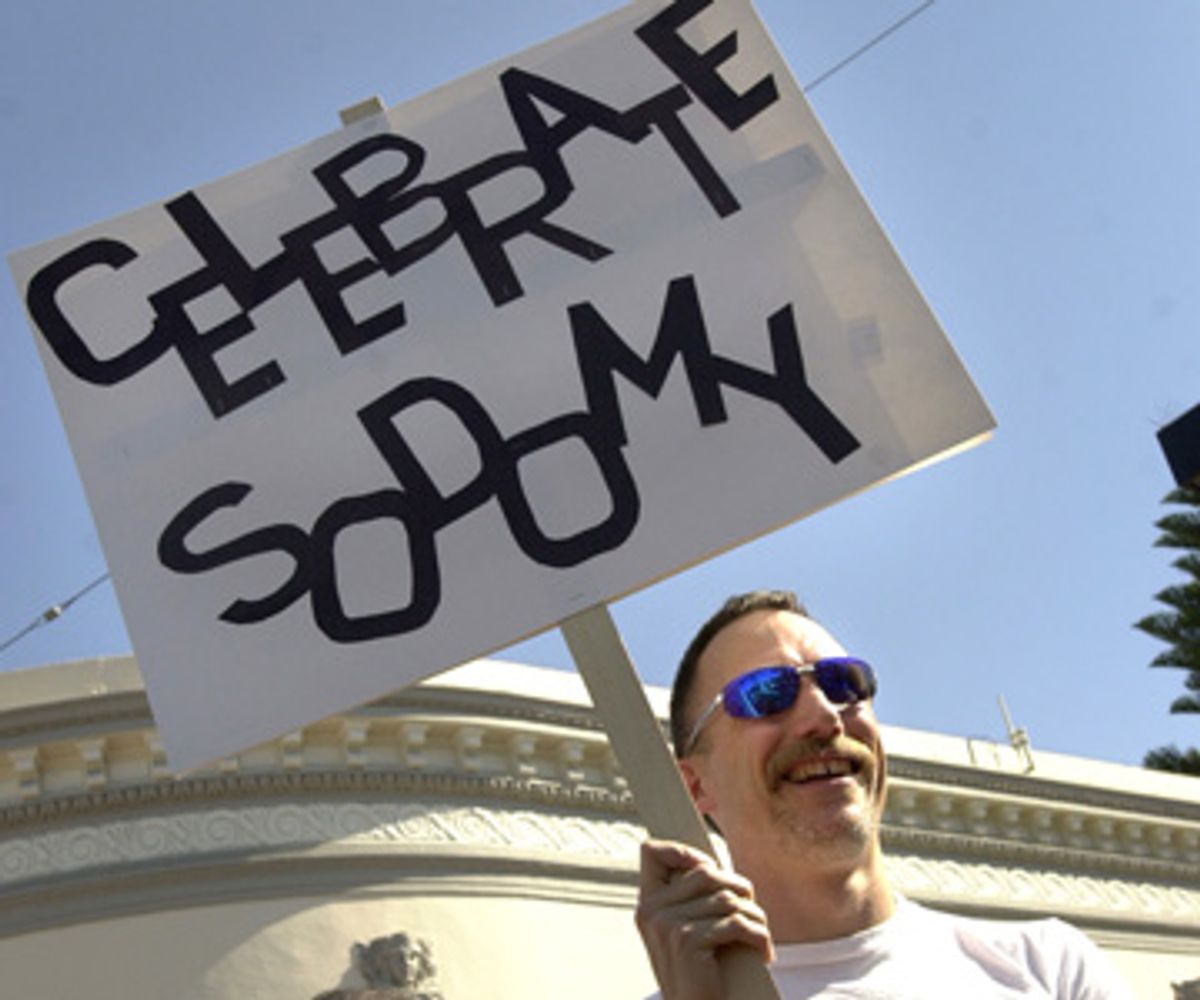 "The infamous crime against nature" is how Blackstone used to refer to it. But what exactly was the nature of the crime? Therein lies a tale, and American legal scholar William N. Eskridge Jr. is here to tell it in painstaking detail. "Dishonorable Passions" is about the evolution of U.S. sodomy laws from 1861 to 2003, but really, it's about how America copes with "the other," a rite of negotiation that breaks down to: ignore it, then demonize it, then grudgingly incorporate it (as long as some other "other" is ready to replace it).

The first two elements in that sequence may be found in Genesis 19, which is also the source of all the trouble. Lot's house has been surrounded by the men of Sodom, "both old and young," crying: "Where are the men which came in to thee this night? bring them out unto us, that we may know them." Lot, rather alarmingly from modern perspectives, tries to appease the mob by offering his own daughters. The mob refuses. Whereupon Lot's male guests, angels in disguise, strike their would-be ravagers blind. Fire and brimstone follow; Sodom is no more.

But the imperative lingers. Bring them out unto us, that we may know them. "Know" was, of course, the best euphemism King James' translators could come up with, but it was also a capitulation before practices that, in biblical terms, beggared description. How did the men of Sodom propose to know Lot's houseguests? If you'd asked someone from the early 19th century to define sodomy, he would have imagined not a penitentiary-shower scenario but a whole array of "damnable conduct" that applied equally to men and men, men and women, and men and animals. (Among the most common sodomy convictions of the 1800s, writes Eskridge, was "bestiality with barnyard animals and the occasional ferret.") The notion of punishing homosexuals as a class was literally inconceivable, for the word "homosexual" had not yet entered the English language and the implicit aim of sodomy laws was to punish all non-procreative sexual acts, regardless of who performed them.

They could, however, be made to pay for other people's pleasures. Between 1946 and 1961, anti-vice campaigns gave policemen carte blanche to arrest unprecedented numbers of homosexuals. Those who weren't thrown in jail were harassed, brutalized and blackmailed. Bars were raided, lonely men were coaxed into illicit sexual encounters. A strange and poignant irony was at work. Homosexuals who had gone their whole lives trying to conceal their identities were now being dragged onstage and cast as enemies of the American people. (Police were especially eager to enforce sodomy laws against blacks, Latinos and cross-dressers.) As activist Harry Hay recalls it, "Queers were the one group of disenfranchised people who did not even know they were a group."

In response, Hay helped found the Mattachine Society, a genteel (and brave) organization that tried to position gays as a minority deserving as much protection as any other. The reactionary tide, though, was too strong. During the first decade of the Cold War, an estimated 5,000 civil servants were fired for suspected homosexual activity -- thousands more than were sacked for political leanings. "The McCarthy era's official enemy was Communism," Eskridge writes, "but its everyday fodder was the homosexual."

By forcing gay people out of their closets, these witch hunts had the unintended effect of creating new generations of accidental activists who turned their persecution into a platform for change. As a result of their efforts, consensual private sodomy is no longer an enforceable crime in the United States, and we can look back with greater clarity at the people who tried to block the way.

Emerging from the mist of memory: Anita Bryant, former beauty queen, shouting, "Save our children!" into Dade County's humid air. (Bryant's group warned in a newspaper ad that "the recruitment of our children is absolutely necessary for the survival and growth of homosexuality. Since homosexuals cannot reproduce, they must recruit, must freshen their ranks.") Further back in time, we find the no-longer-benign specter of Earl Warren, who, as California's governor in the 1940s and early 1950s, spearheaded what Eskridge calls "the greatest antihomosexual Kulturkampf in American history." Warren's state led the nation in sterilizing "sex perverts," and any Californian convicted of consensual sodomy could be shipped off to Atascadero State Hospital, otherwise known as "Dachau for Queers," where lobotomies, electroshock and castration were the order of the day. As one in-house physician noted, patients soon lost "their fear and hate" and became "noticeably friendly."

Unexpected heroes also rise up from Eskridge's chronicle. Dr. Alfred Kinsey (who had more than a passing acquaintance with the subject) became the first public figure in America to unequivocally oppose consensual sodomy laws. And in 1955, Learned Hand, considered the greatest jurist never to be appointed to the Supreme Court, personally intervened to get consensual sodomy dropped from a Model Penal Code that would later influence dozens of states to follow suit.

Eskridge reserves most of his narrative muscle for the Supreme Court cases that respectively stand as the Plessy v. Ferguson and Brown v. the Board of Education of sodomy-law reform. The battle was joined on August 3, 1982, when officer Keith Torick showed up at Michael Hardwick's Atlanta apartment to arrest him for missing a court date. Claiming the door was ajar, Torick walked in and found Hardwick engaged in "mutual oral sex" with another man. Hardwick was promptly arrested and handcuffed, and though the district attorney dropped the sodomy charge, local ACLU attorneys seized their moment and filed suit on Hardwick's behalf. Three years later, in Bowers v. Hardwick, the Supreme Court ruled for the state. "To hold that the act of homosexual sodomy is somehow protected as a fundamental right would be to cast aside millennia of moral teaching," wrote Chief Justice Warren Burger in his concurring opinion.

Burger's history was, as Eskridge demonstrates, faulty, and 18 years later, the court had the chance to reconsider its decision. Houston police, answering a phony distress call from a spurned lover, had entered John Lawrence's apartment and, finding him in the midst of a sex act with Tyron Garner, had led him away, still in his briefs. The case landed in the lap of a considerably different Supreme Court: more conservative in some ways but also more diverse. The outcome was different, too. "Bowers was not correct when it was decided," declared Justice Anthony Kennedy in his majority opinion, "and it is not correct today."

Eskridge himself drafted the amicus brief that shaped much of the historical analysis behind Lawrence v. Texas, and he is deeply savvy about the behind-the-scenes jockeying that produces the illusion of unified court thought. He is also deeply skeptical that gay Americans, in the wake of Lawrence, are home free. "The state can no longer legislate gay people as outlaws," he writes, "but neither must it treat sexual variation as completely benign or neutral ... The United States has not become a nation of moral liberals generally, and certainly not as regards homosexuals."

A sober position, delivered in prose that is maybe too sober. It goes without saying that a book about sodomy will never be as much fun as the act itself, but Eskridge's mountains of legal pads obscure just what it is about that act -- at least as it's popularly understood -- that gets under America's skin. John Lawrence, after all, was arrested in the middle of fucking another man -- a black man, at that. Disgust vividly colors the accounts of the police officers who had to pull Lawrence off, but surely there is a terror lurking there, too. Anal sex is a reminder to every man, gay and straight, of the chink in his masculine armor. Watching Lawrence and Garner pleasure each other, those two officers must have understood at some level that they, too, could be entered and dominated. And if they weren't careful, they might enjoy it.

Sexual panic that elemental doesn't go away easily, and if conservatives have been willing in most cases to let consensual sodomy laws drop, it's because they've found something even more frightening to organize around: gay marriage. Just as sodomy took on some of the opprobrium that once attached to miscegenation, so now marriage equity is replacing sodomy as the thing that most threatens the American fabric. That, too, will change, but the evidence of "Dishonorable Passions" suggests that the American majority defines itself as much by what it isn't (black, Jewish, Communist, gay) as by what it is. One can only wonder: Who will be the Sodomites of tomorrow?