The big, angry green guy is back in this booming picture. Sure, it's a fantasy -- but is it too much to hope for a little believability? 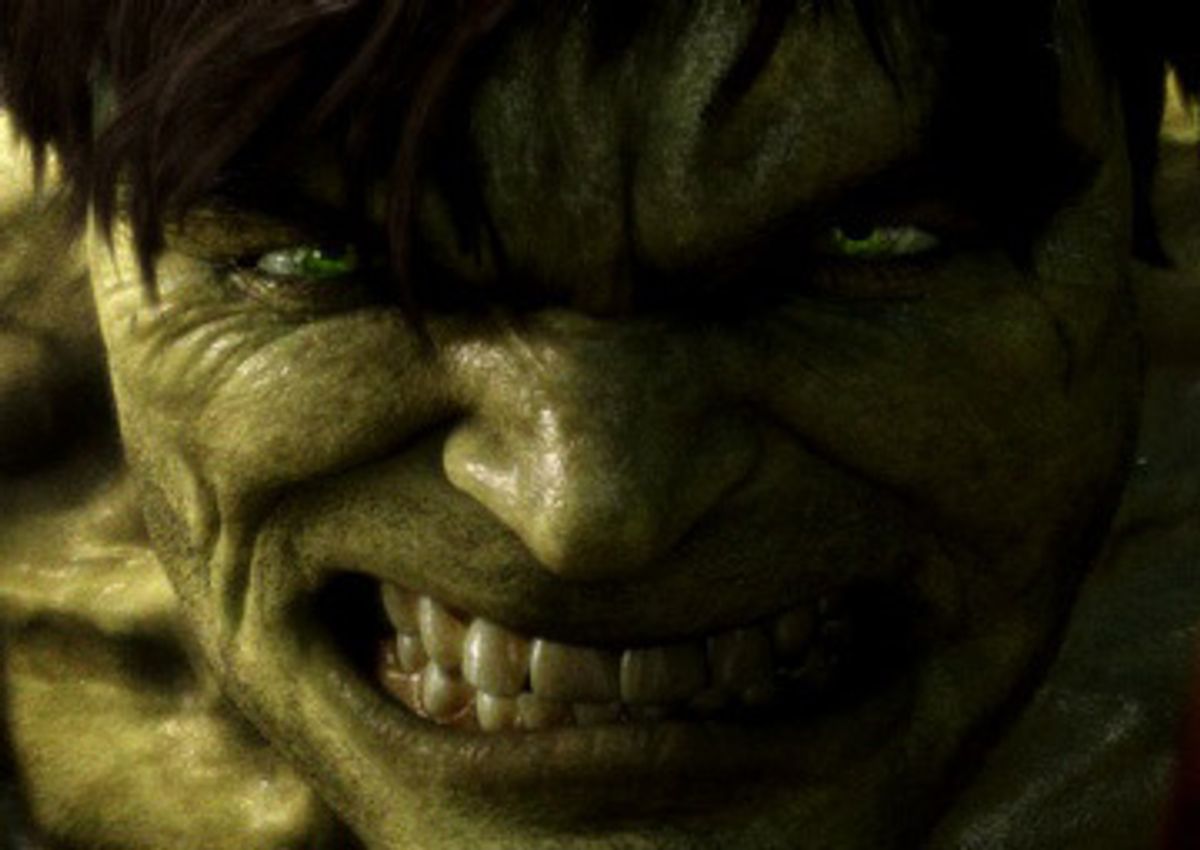 Movies based on comic books are supposed to be the stuff of fantasy. But is it too much to ask for a little believability? Louis Leterrier's "The Incredible Hulk" -- conceived as a do-over after Ang Lee's cerebral 2003 "Hulk" proved to be such a disappointment to fans of the Marvel comic series -- is so fattened up with special effects that it seems to be insulating itself against audience disapproval. But that's not the same as teasing moviegoers, or delighting them, or sending them home with the sense that they're leaving with more than they came in with. "The Incredible Hulk" is an extravagant, booming picture, and Leterrier has taken great care to deliver one particular element that Lee's picture skimped on: He gives us plenty of opportunities to watch an angry, musclebound green giant smash stuff up. But Leterrier's Hulk -- like Lee's -- isn't a real-life bodybuilder in tiny, tattered pants, à la Lou Ferrigno, who starred in the popular television show of the late '70s and early '80s. He's a CGI creation whose body is a rolling landscape of bulbous muscles and throbbing veins, attached to a face that tells us nothing: Leterrier and his team of CGI elves have worked hard to make the Hulk look "real." They just haven't bothered to make him seem human.

Edward Norton plays Bruce Banner, a scientist who, as the result of an experiment gone haywire, has suffered gamma-radiation poisoning: Now, whenever he becomes angry or overexcited, he's transformed from an essentially low-key, polite man of science into a big, green, pissed-off guy. (Leterrier whisks much of the Hulk's back story out of the way during the opening credits, an economical way of setting up the story for the uninitiated without slowing things down too much for those who already know what they've signed on for.) Banner, knowing he can't fully control his emotions, or his body, has chosen to live in isolation. When the movie opens, he's hiding out in Brazil, working in a soft-drink bottling plant -- the camera gives us a sweeping view of the favela where he lives, a patchwork of flimsy-looking, multistory shacks. In his spare time, Banner tries to learn Portuguese and occasionally meets with an advisor, a Zen-master type who says things like, "The best way to control your brain is to control your body" while doing weird ripply things with his stomach. He also connects from time to time with a mysterious online friend, who may be able to help him find a cure for his condition.

But Banner can't live in hiding forever, and eventually a general who has a vested interest in his secret, Thaddeus "Thunderbolt" Ross (a stony-looking William Hurt), smokes him out, with the help of a crackerjack special-ops goon, Emil Blonsky (Tim Roth). But they can't catch Banner -- at least not right away -- and on the run, he at least has a chance to reconnect with his lost love, Betty Ross (Liv Tyler, giving a sweet, straightforward performance that's nearly as translucent as her skin), a former colleague who was present, and was injured, on the day of that fateful experiment.

Everything in "The Incredible Hulk" is big, or at least writ large, although the picture isn't wholly without heart: Leterrier has a taste for sentimental melodrama and a knack for making it work visually, as he did in 2005's "Unleashed." "Unleashed" is unapologetically over the top, which is part of why it works: Jet Li gives a performance with the gravity and intensity of great silent-film acting, and Leterrier lets him run with it. In "The Incredible Hulk," you see a few flashes of that crazy-romantic Leterrier touch, particularly a sequence in which Banner, who hasn't seen Betty in ages, finally gets a glimpse of her. He spies on her from behind a tree -- he doesn't want her to see him -- and his face shows a mix of shyness, wonder and suffering. It's a lovely moment, the kind of subtlety Norton is capable of when he puts his mind to it, and it suggests that Leterrier has some real feeling for the characters he has been entrusted with putting on-screen.

But Leterrier, also the director of sleek entertainments like "The Transporter" and "Transporter 2," likes to keep the action moving, which isn't by itself a bad thing. The problem is that "The Incredible Hulk" is all action and no storytelling. (The script was written by Zak Penn and Norton, based on characters by Stan Lee -- who makes his customary cameo appearance here -- and Jack Kirby.) One thing happens, followed by another, and then another -- there's very little emotional connective tissue between events. "The Incredible Hulk" is more about special effects than about the longing, the frustrations or the vulnerability of any of its characters, especially the big green one. Leterrier packs so much in, including an elaborate rumble on the streets of Harlem, right in front of the Apollo Theater, that it's almost as if he doesn't want us to notice what's missing -- chiefly, a main character we can believe in.

Wanting believability in a comic-book fantasy isn't the same thing as wanting realism. In the movie, the Hulk isn't a superhero but an anguished behemoth, a misunderstood beast along the lines of King Kong -- he may be terrifying, but somewhere inside his angry little brain, he also has the capacity for love. But Leterrier's giant green thing has about as much character as an expensive toy. His face doesn't show expression so much as calculated manipulation of various features: His massive brow furrows just so, as if controlled by wires (and maybe it would look better if it had been); he bares his teeth in a mighty mechanical grimace. Even in the scenes where he shows traces of human tenderness, his face tells us almost nothing about who he might be in his other, better life, or why we should care about him. His most affecting scene is the one in which he growls to those who are trying to capture him, "Leave me alone" -- a moment in which he reveals his self-loathing, his belief that he's a monster unfit to associate with people.

The credits tell us that the voice of the Hulk is Ferrigno. In addition to the voice work, Ferrigno -- with that wide, appealing almost-smile, and those even wider shoulders -- also appears on-screen in a cameo role (as he did in the Ang Lee film). At the screening I attended, the audience cheered when he showed up, spontaneously acknowledging an old friend.

I felt that way too, even though I'd seen the TV show only occasionally. It's possible that the Hulk is one of the toughest comic-book characters to pull off: Even though these characters often wear masks, there are always some clues to the human being -- and, in the case of movies, to the actor -- underneath. When we look at Batman, we also see the haunted eyes of Bruce Wayne (and of Christian Bale or Michael Keaton). Spider-Man's eyes may be totally hidden, but we can still pick up clues in the body language of Peter Parker (or of Tobey Maguire), traces of a teenager's mischievousness or insecurity.

But the Hulk doesn't resemble Bruce Banner at all, which is precisely the point: He's supposed to be an unrecognizable creature, a metaphor for the highly imperfect things inside us that we can barely bring ourselves to acknowledge. On the old TV show, Bill Bixby (who played Banner) looked nothing like Ferrigno; yet Ferrigno -- the less "human-looking" of the two, with those unreal muscles -- was so sympathetic that the connection between the characters wasn't an abstraction. And it was Ferrigno, in that green makeup, who made the show memorable. Even in the throes of his most destructive impulses, he managed to remind us he was a creature in pain.

Leterrier's Hulk may be in pain, but it's hard to tell: He's an achievement, not a character. Watching him, I couldn't even tell whether I found his movements realistic. CGI effects are so commonly used in action movies today that I've lost track of whether they're supposed to look real, or more real than real. The Hulk, in particular, is an example of an effect that exists to astound without being particularly affecting. "The Incredible Hulk" suggests only that we've bottomed out on special effects: They're not necessarily getting better -- they're just getting bigger. Technically, Leterrier's Hulk is as realistic-looking as a rampaging green giant could be. But that doesn't make him credible.