And Obama's veep is ... a Republican?

Some are buzzing about Chuck Hagel, a strong critic of Bush and the war, for the Democratic ticket. A bold idea or political fantasy? 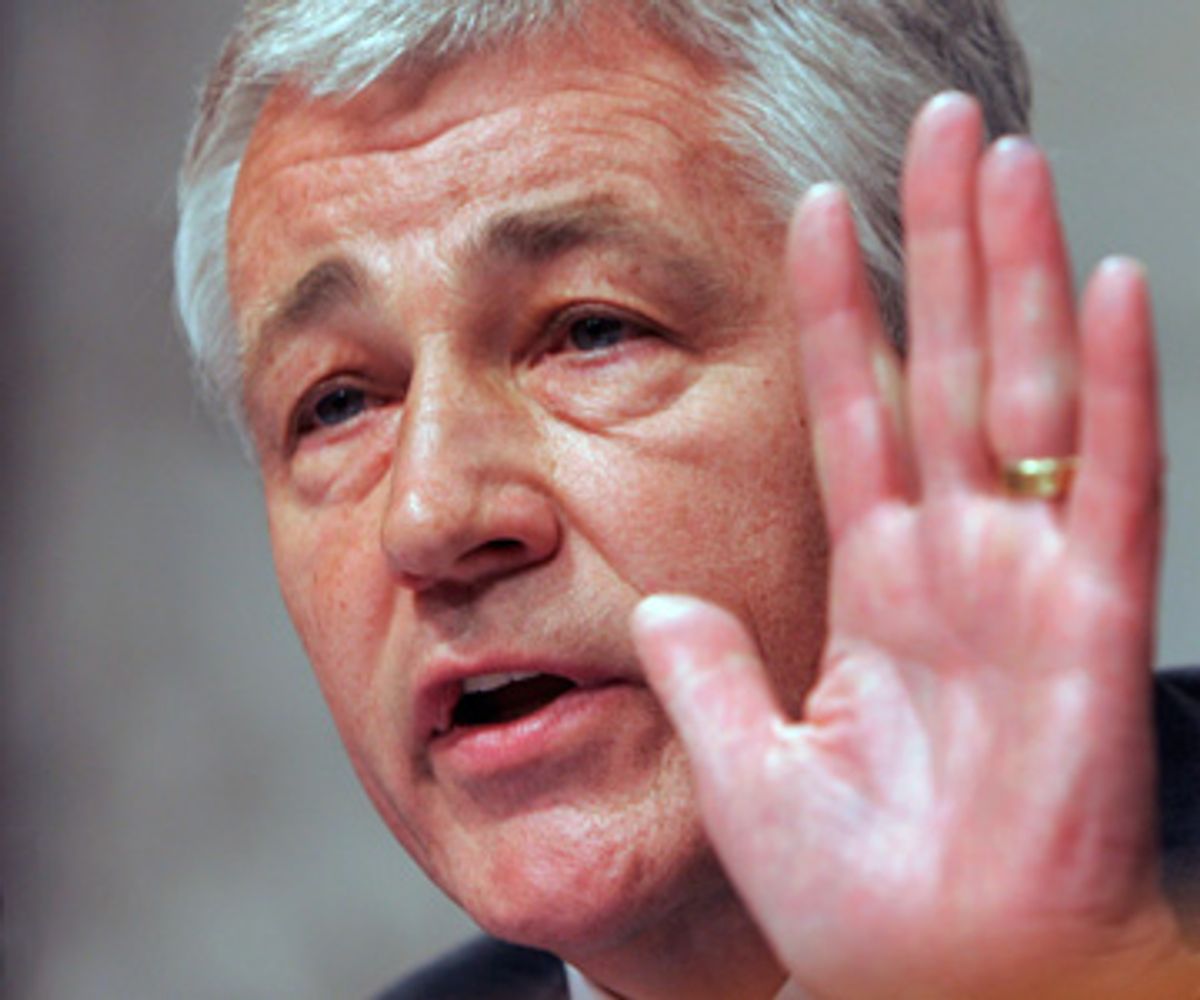 Something strange happened to Chuck Hagel over the last couple of years: He started to turn into John McCain.

Not the John McCain who's running for president this year, though. The John McCain who ran in 2000 and who rampaged in the Senate for a few years after that -- leading the charge for campaign finance reform, flirting publicly with Democratic leaders, opposing George W. Bush apparently for the sheer fun of it. The John McCain, in other words, who was for a time the favorite Republican of many Democrats.

Now Hagel seems to have taken over that title -- and he's being discussed as a contender for Barack Obama's vice-presidential pick. While Hagel is a long shot for the job, what seems to be stirring some interest in him is less a question of electoral math than of political metaphysics. Running with a Republican would reinforce the message that Obama is serious about changing the way things are done in Washington, and that he really does aim to move the country past the partisan battles of the last couple of decades. At the same time, Hagel's very public split with Bush and the rest of the GOP on the war in Iraq bolsters Obama's case about foreign policy -- that the administration has America on the wrong track vis-à-vis the rest of the world.

But Hagel may be a more attractive candidate in theory than in reality. The buzz about him seems to overlook the fact that he is, despite how much he may like to criticize his own party, a conservative Republican, especially on issues that don't involve foreign affairs. Politics, the saying goes, stops at the water's edge. So might the Obama-Hagel ticket.

As the war in Iraq dragged on, Hagel, Nebraska's senior senator, started to see more and more parallels with Vietnam, a war he -- like McCain -- experienced firsthand. But where McCain looked at the Bush administration's initial Iraq strategy and saw mismanagement hurting a noble cause, Hagel saw an idea he never liked much to begin with (though he voted to authorize it). He saw it getting worse as it went along, and he said so publicly. Two months before the 2004 election, Hagel called the reconstruction effort "beyond pitiful." Last summer, he told Esquire President Bush was "not accountable anymore" and that "before this is over, you might see calls for his impeachment."

The lifelong conservative -- who nearly ran for the GOP nomination himself before deciding, instead, to retire from the Senate -- is getting some buzz among Democratic activists and Beltway pundits as a possible running mate for Barack Obama. (Once again, a reminder that this is shaping up to be an unusual election.) Hagel gets touted as a moderate Republican who's wise on foreign affairs and ready to reach across the aisle to help the country get back on track, as well as help win independent voters for the ticket.

Hagel's wife, Lilibet, gave Obama $500 in February, and Hagel himself has pointedly declined to endorse McCain. Last month on CNN, Hagel ducked a question about the vice-presidency, passing up the chance to give a robust, Shermanesque "no." (His office declined to comment for this story.)

Selecting a prominent Republican war critic -- and one given to pronouncements like, "I sometimes question whether I'm in the same party I started off in" -- might be the way for Obama to make good on his post-partisan rhetoric. But is the Democratic Party -- let alone the country -- ready for a so-called national unity ticket?

The latest chatter is actually the second iteration of "Hagel for V.P." for 2008. Last year, Hagel was widely rumored to be eying a campaign as New York Mayor Mike Bloomberg's running mate on an independent ticket. The two men spoke at a conference in Oklahoma in early January, stacked with the type of bipartisan "wise men" who wind up on nearly every select commission in Washington. It could have been the starting point for a new political force called the Blue Ribbon Panel Party. But Bloomberg decided not to run once McCain won the GOP nomination, and the moment passed.

Now, some Democrats want Obama to look outside the proverbial box for a running mate, courting the independent voters Bloomberg would have sought. "He was not the candidate of the Democratic establishment although he's courting the establishment now," Democratic strategist Donna Brazile told Salon. "This is an opportunity to go outside the traditional walls of looking for some kind of geographic or political balance [in a running mate]. The country's in such a mood now, it's in a pickle almost," she added, referring to the possible appeal of the national unity ticket.

Hagel would also bring some strong credentials, says former Sen. Bob Kerrey, a Democrat and fellow Nebraskan, who ran for president himself in 1992. "He's fun to hang out with, he's got terrific knowledge of foreign policy and national security, and he enjoys the work," Kerrey said.

On foreign policy, Hagel could help Obama disarm McCain's charge that Obama is inexperienced, and Hagel's Army service in Vietnam might counterbalance McCain's playing up his own Navy career. Domestically, Hagel has a record of aiming for the same kinds of fiscal restraint and limited-government conservatism that McCain touts -- he opposes earmarks, thought No Child Left Behind was a mistake, and opposed a recent farm bill, despite his home state's agricultural interests, because it cost too much. He joined with Democrats and other Republicans, including both Obama and McCain, to sponsor immigration reform legislation, and he mostly stays away from fights over wedge issues when they make their way to the Senate floor.

Still, most people who see Hagel as a good veep choice are only focusing on Hagel's record on Iraq (which, admittedly, is the reason for most of the press Hagel's gotten since he started speaking out). And many of them may not actually know much about what he stands for. As one Democratic strategist on Capitol Hill put it, "Republicans aren't bad because they're Republicans; Republicans are bad because they believe different things than us. And Chuck Hagel doesn't believe those things."

Where the whole fantasy breaks down is that, alas, Hagel does hew to traditional Republican causes.

"Chuck is, I would say, a movement conservative," Kerrey, who considers Hagel a friend, said. The American Conservative Union says Hagel has voted the way it wants on nearly 85 percent of what it considers key votes over his career. Getting him nominated at a convention that may already be somewhat fractious after the long primary battle would be tough. "It's hard to imagine that (delegates) are going to vote on someone at the Democratic Convention who's anti-choice, anti-civil rights for gays and anti-gun control," Kerrey said. "It's not impossible, but it's bumping right up on the edge."

Ever since Bill Clinton picked another moderate Southern baby boomer to run with him 16 years ago, the old conventional wisdom about vice presidents -- that you need a candidate to give you regional and political balance -- has been crumbling. That doesn't mean all the rules have gone out the window, though. "If they go the real unconventional route of choosing someone of the other party or someone who's independent, they better make damn sure that their base will see the need of selecting that person," Brazile said. "They better make sure that person is someone who can rise above the divisions."

In other words, unless a Republican running mate would virtually guarantee Obama a win in November, it's probably not worth the risk of angering Democrats to pick one. Chances are, this is one part of the old politics that Obama won't be willing to mess with.