To avoid humiliating a once-great party and subjecting America to more painful glimpses of McCain's ideas and teeth, the mercy rule must be invoked now. 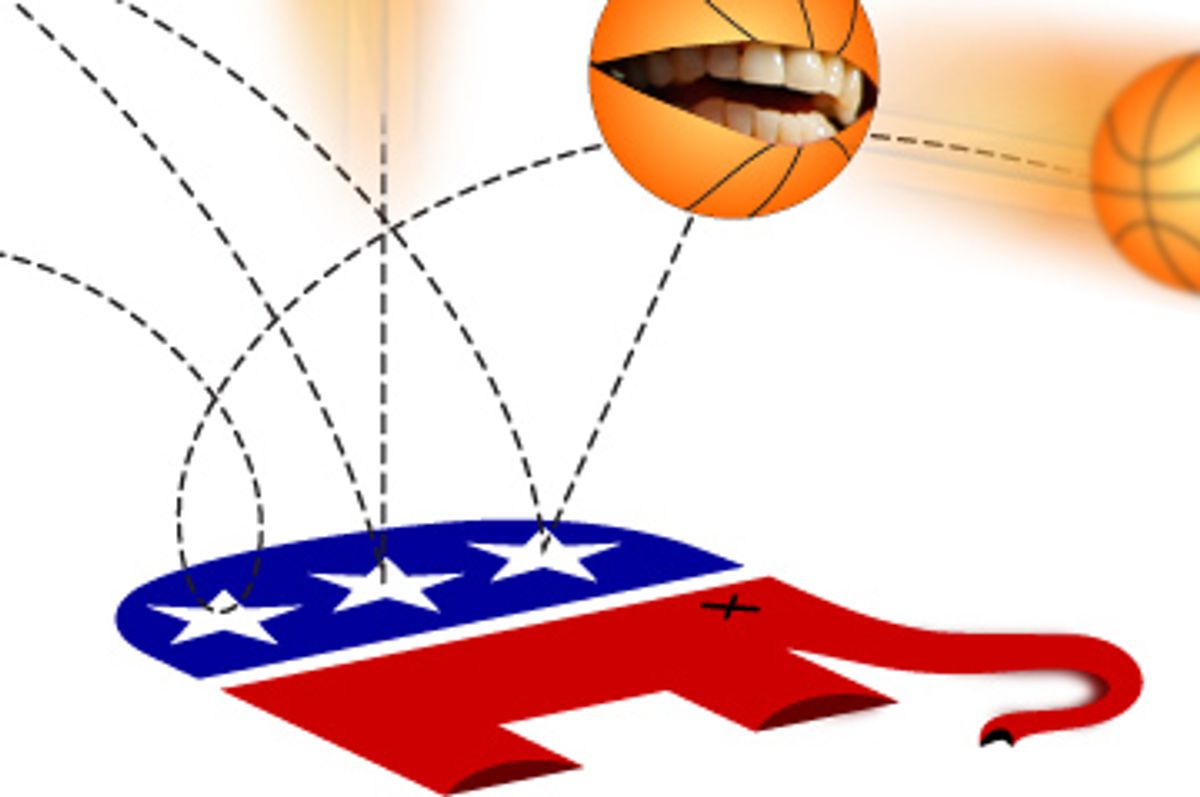 When my daughter played in the peewee soccer league, when one team fell behind by more than five or six goals, the referees called the game. The "mercy rule" is a civilized one, driven by good sportsmanship. This rule usually applies only to youth athletic leagues, but in times of national crisis, we should all be open to fresh ideas, even if they are associated with snack assignments and medals made out of recycled poker chips. And with America now facing an election so ludicrously one-sided that it threatens to permanently traumatize a large percentage of the population, I would be remiss in my duty as a citizen if I did not propose that in the spirit of national unity, the GOP must be allowed to forfeit the coming election.

I am aware that some diehard process junkies will object that the election has not yet taken place, and that it would therefore be inappropriate for the mercy rule to be invoked at this time. That legalistic argument may have some tiny, niggling validity, but it is far outweighed by the enormous drawbacks of allowing the election to proceed. It is simply not fair to a once-great party, or its followers, to force it to compete under these horrendous conditions. It isn't reasonable to expect the GOP to bounce right back after being led for eight years by a destructive nonentity like Bush. The father of modern American conservatism, the late William F. Buckley, remarked before he died that Bushian conservatism had failed to "take into account reality" and that the movement had become "slothful." Well, my fellow Americans, I submit that a reality-avoiding sloth may be an attraction at the zoo, but it is not a creature that deserves a place on the ballots of this great nation.

Actually, a reality-averse sloth would be far more competitive than the pathetic team the hapless GOP is trotting out to play for the championship. If allowed to proceed, a McCain-Obama matchup will be a hideous reenactment of one of those 105-to-16 games between the Harlem Globetrotters and the Washington Generals, or another one of those interchangeable teams of slow, dorky white guys who stumble around missing set shots while Meadowlark Lemon and his chortling teammates spin the ball on the tips of their fingers, bounce it off their opponents' heads, and soar in with big grins on their faces for uncontested layups.

If the 2008 GOP were a basketball team, this would be its starting lineup. (Cue strobe lights and swelling synthesizer music.) At power forward, their supposed star player ... Warren Terror! (Dead silence, followed by scattered jeers.) This guy is the biggest joke in the league. The fact that coach John McCain has been forced to start him reveals just how abysmally weak the rest of his team is. Terror is a washed-up muscleman who has been coasting on his reputation as an enforcer for years, but is now recognized by all as a no-skill has-been who is detested by his own teammates. Terror's disastrous performance in the playoff game against Iraq, in which he went 0-for-12 and fouled out in three minutes, forced even his few remaining fans to accept that his hyperaggressive play and hack-a-Saddam approach to defense was actually hurting his team. The fact that McCain and the GOP team ownership continue to pump up Terror's long-vanished reputation (in a now-notorious press conference, they promised to play him for "10,000 years") borders on the grotesque, since fans across the league now recognize him as an overhyped, overpaid loser. But McCain has no choice, because at small forward, he is forced to start ...

Ideological Incoherence! One of the most ineffective and least-respected players in the league, Incoherence's name will forever be linked with coach McCain's. During the 2004 season, McCain started his favorite draftee, Kid Maverick, at small forward. But GOP team owner George W. Bush despised Maverick and ordered McCain to trade him or walk the plank. McCain caved in, released Maverick and signed Ideological Incoherence. The once-promising Kid Maverick is now out of basketball, and McCain is stuck with Incoherence. Incoherence is a triple threat: He's a horrible ballplayer, has serious character issues and is signed to a long-term contract. Incoherence is legendary for choking in the clutch, perhaps as a result of his bizarre decision to change his shooting motion in every game. A backstabber and chameleon -- "he's the biggest flip-flopper since Manu Ginobili," sneered one GOP scout -- he has burned his bridges with every teammate he has ever played with, from Religious Right to Tax Cuts to Immigration Reform to Domestic Spying to Legal Torture.

Rounding out this laughable front line, playing center and checking in at 5 feet 1 inch, it's ... Wooden Delivery! Delivery is noted for three qualities, none of them desirable in a center or at any other position: He's the size of a jockey, he possesses zero court skills, and he makes the worst inspirational speeches in basketball history. His last attempt to "fire up" the team, punctuated by insufferably lame jokes and constant, robotic smiles, was so disastrous (six of his teammates fell asleep, three others quit the team on the spot and the remaining two attempted to forcibly extract his teeth) that Team GOP forbade him to ever open his mouth again except to breathe.

If you think these three stiffs suck beyond any frontcourt trio ever to disgrace the hardwood, wait until you get a load of the backcourt. Starting at shooting guard, it's ... Five-Dollar Gas! Gas, aka the Brain-Dead Gunner, can empty a team's tank faster than any other two-guard in history. Besides his .00023 lifetime field-goal average, Gas' sole claim to fame is that he's the only player in the history of the league who is in such terrible physical condition that he needs to stop for an oxygen fill-up every time he passes midcourt. Even if every other player on Team GOP was an all-star, the mere presence of Gas in the lineup would be enough to ensure defeat. His vast salary, extravagant lifestyle -- he breeds Arabian horses in Abu Dhabi -- and his utter lack of effort night in and night out, have made him uniquely hated among fans. It's hard to blame Gas solely on coach McCain -- after all, he inherited him from the previous coach. But who said sports were fair?

Last and least, at point guard, it's ... Crotchety Old Fart! The oldest player in the league by 33 years, 71-year-old Fart teams with Gas to form a backcourt that really stinks out the joint. Doddering, creaky and liver-spotted, Fart is famous for forgetting to guard his man and launching into bizarre on-court monologues in which he excoriates nameless "young 'uns" for "climbing over my fence and messing up my yard." Fart's tendency to turn his quavering head away from the ball to deliver barely comprehensible outbursts of rage, along with his terminally arthritic knees, has earned him a reputation as the worst-tempered, and worst, defender in league history.

That's a starting five to terrify the Octogenarian Bridge Club of Lake Oswego, Wis. And this I-Walked-With-a-Zombie lineup is backed by a bench that features such corpses as Son of Bush, Iraq Quagmire, All Out of Ideas, Foreclosure Crisis, Big Brother, Global Warming and Katrina Heckuvajob.

To force this lineup of world-class losers to play against the fast, athletic, well-coached Democratic team would be cruel and unusual punishment. Common decency requires us to allow the Republicans to put a team on the field that does not resemble an allegorical 16th century painting of "The Sick, the Halt and the Lame." And therefore I call on patriotic Americans of all parties to reach beyond partisanship and demand that this election be forfeited, so that the once-mighty GOP can have four years to clean out its bozos and crooks, produce some actual ideas and come back competitive.

Oops. Never mind. I take it all back. In a stunning revelation, Fox News has called Barack Obama's wife, Michelle, his "baby mama." The explosive development follows the Fox team's exposé of the Hussein Obamas' "terrorist fist jab" and their ongoing investigation of B. Hussein's blackness. (According to Fox News anchor Lester Maddox, Osama bin Hussein was still black at press time.) These bombshells have thrown the race wide open. It'll be a thriller. A nail-biter. Game on!