Not much is at stake on Election Day 2008. Just the long-term health of the global economy and the future of the planet. That's what the offshore drilling debate is all about. 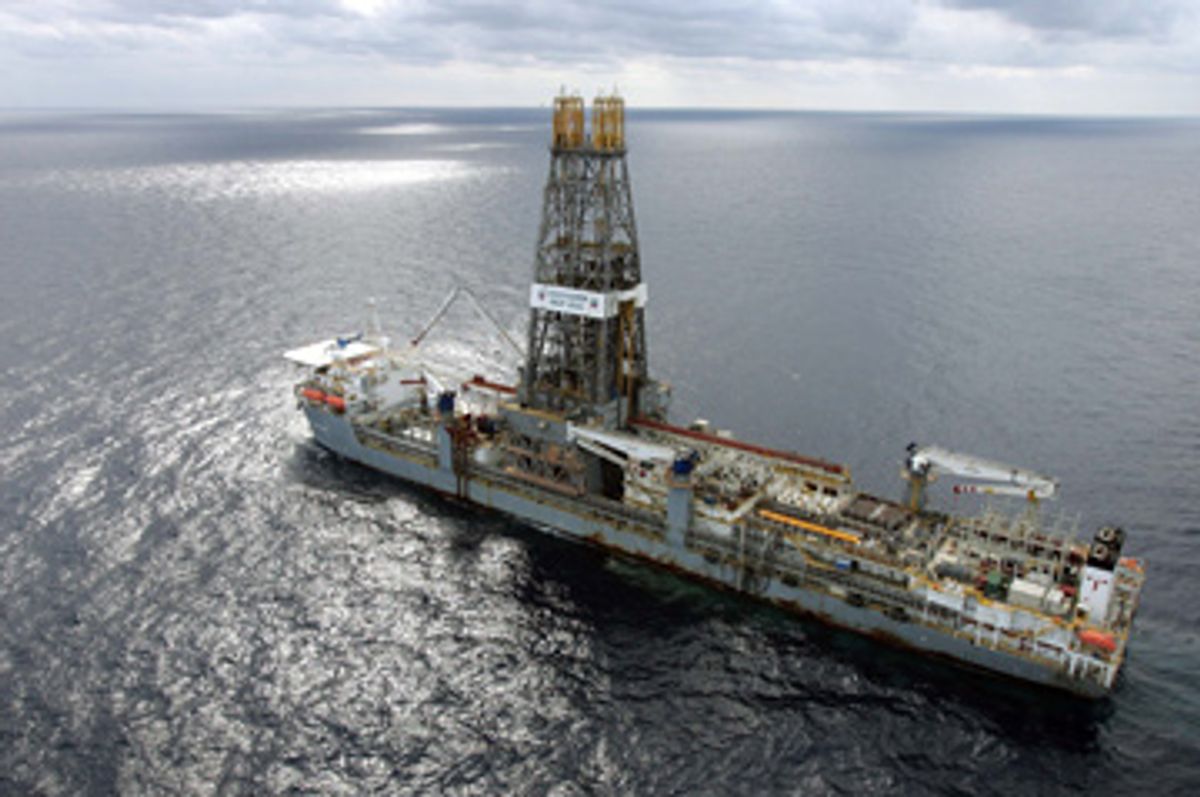 Let us suppose, for the moment, that President George Bush, Sen. John McCain, and Florida Gov. Charlie Crist are correct: Offshore drilling will ease pain at the pump for American consumers. I mean it, let's not hold back. Let's give Republicans the full benefit of the doubt. Let's even throw in ANWR, and accept at face value the White House's estimates that there are 18 billion barrels of oil ready to be exploited on the outer continental shelf, and another 11 or 12 billion in Alaska.

Don't even worry about the little problem that it will be years before oil starts flowing from these new oil fields. Let's be really generous. Let's even suppose that merely lifting the federal moratorium on offshore drilling would send such a strong message to energy markets that all those traders currently speculating in oil futures would get spooked and rush to unload their positions. If a fire on one North Sea oil rig can send prices spiking up, what would a huge American commitment to drill anywhere and everywhere do?

The price of oil would drop like a rock! Gas prices might start plummeting before the presidential election! A recession could be averted! Best of all, maybe GM and Ford could renege on their plans to close down their SUV manufacturing plants, because with lower gas prices, Americans would stop buying small hybrid cars and go back to their true gas-guzzling loves.

It could happen. It's certainly not impossible. The reason Republicans -- including the likes of Crist, a one-time opponent of offshore drilling who has performed a truly dazzling flip-flop pirouette on this issue -- are jumping on the politics of offshore drilling is that there is a clear kernel of truth in their stance. There is more oil to be drilled in this world, and more supply will undoubtedly have some effect on prices. Even just the prospect of more supply will likely make a difference. So Bush and McCain's hurtful accusation that Democrats are responsible for high gas prices is not entirely wrong.

So what's the worst that could happen?

If we're going to give Republicans the full benefit of the doubt, then it is only fair to offer the same treatment to Democrats. So let's take their arguments at face value also. There will be oil spills off the coasts of Florida and California, fouling beaches, killing wildlife, and harming tourism. Unrestrained burning of fossil fuels will continue to raise global temperatures and contribute to rising sea levels and devastating extreme weather events. A plunge in the price of oil will derail the current pressing economic incentives to improve energy efficiency and channel investment into research and development of alternative energy technologies.

And ultimately, these new oil fields will be exhausted, and the whole cycle of rising prices and economic pain will begin all over again. Only this time around, our children, or our children's children, will be in much worse shape than we are now. Environmental stresses will be higher, climate change will be further advanced, and there will be even less oil to go around. (Because, of course, while the U.S. is pumping to its heart's content on its outer continental shelf, existing oil fields around the globe will continue to peter out.) Prices will rocket even higher than our current worst nightmares. We will have sacrificed precious decades in which we could have gotten a leg up in figuring out how to maintain properity in a carbon-constrained future. And those madmen and fools who counseled a quick-fix response to humanity's biggest challenge will be excoriated as some of the stupidest, most criminal leaders in human history.

Making the political case that high prices and recession now might be necessary to avoid even higher prices, a global depression, and ecological catastrophe later is no easy task -- especially in an election year. Arguing that the smart way to compensate for higher gas prices would be to redistribute wealth so as to bolster the economic position of low- and moderate-income working-class Americans offers Republicans yet another political opportunity to cry havoc and let loose the dogs of class warfare. And as each week goes by and gas prices continue to mount, the resolution to think about the long term weakens. This is eminently understandable.

But maybe the most fascinating aspect to the debate about offshore drilling -- to this profound choice between two worldviews, two ways of being on the planet -- is the harsh light it sheds on the value systems at the heart of how political identity is traditionally seen in the United States.

Republicans have made hay for decades by portraying Democrats as spendthrift, reckless liberals. Their side is supposedly "conservative" -- sober-minded, prudent, levelheaded -- while their opponents are "radical" -- dangerous, risky, foolish.

But what is the truly "conservative" position on offshore drilling, or energy policy in general? Recklessly exhausting all available resources now, and letting the future take care of itself -- or conserving those resources, investing carefully for the future, and thinking about the long term? Where does prudence reside -- in attempting to shave a few pennies off of gas prices now, or on planning on how to cope with high gas prices for the foreseeable future?

If you're looking for a metaphor, try the competing fortunes of Toyota and General Motors on for size. George Bush and John McCain are like the fin-de-siecle executives of GM, living only in the present, catering to their customer's worst impulses in pursuit of maximizing profit in the short term. But Democrats are like Toyota, making a bet on what makes economic sense for the future.

Presumably, Toyota's shareholders are a lot happier than GM's, right now. As shareholders in this planet, what do we want? A good quarter now, at the risk of financial disaster next year? Or a long-term ecologically healthy path to sustained prosperity?

That's what the debate over offshore drilling is really about.