Confessions of a salvia eater

This hallucinogenic herb offers an experience as intense as LSD, but the trip only lasts five minutes. Is it any wonder states are banning it? 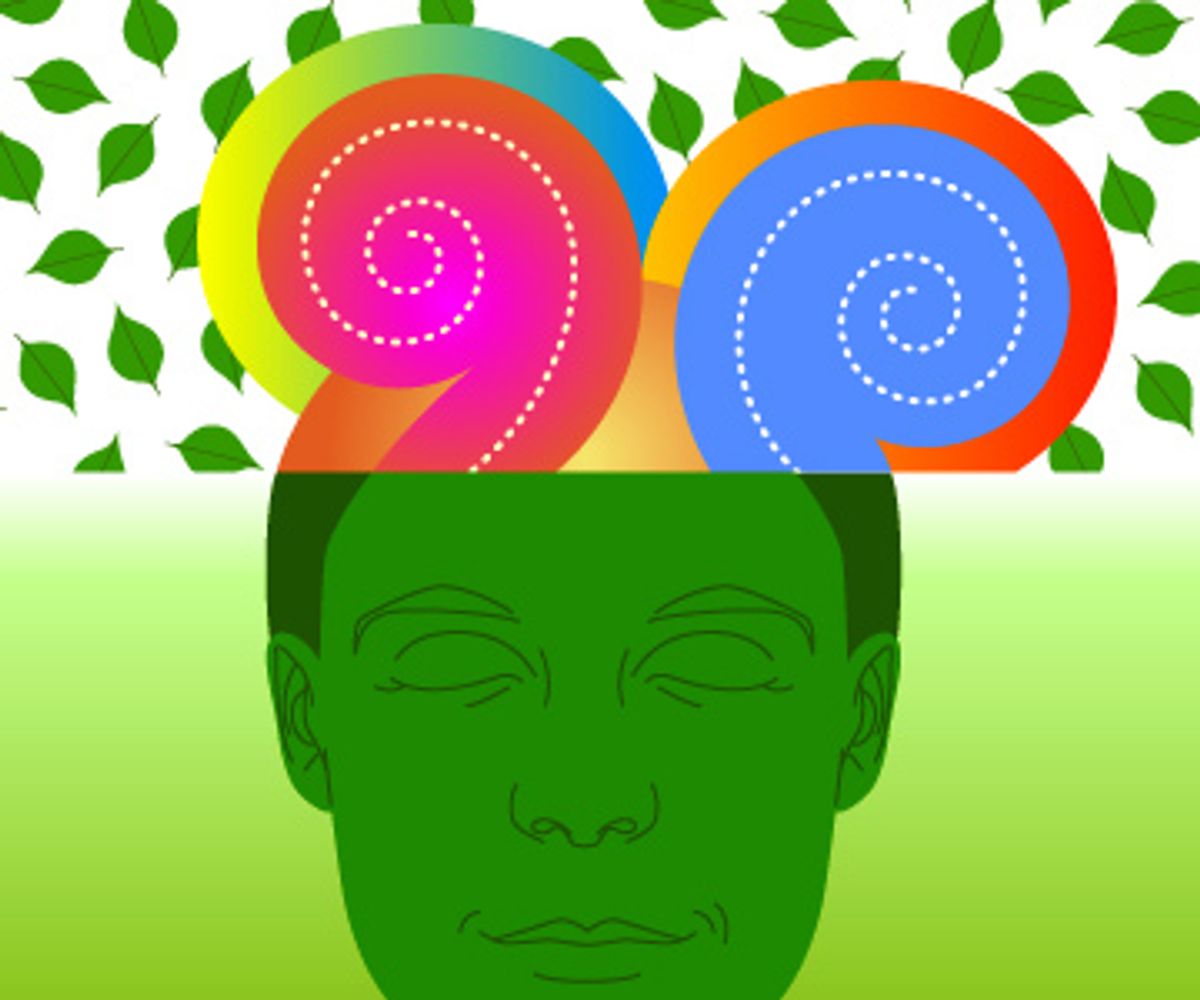 In 2003, always looking for ways to distract myself from the terrifying emotional burdens of adulthood, I ordered some herbs from a Web site that sold "marijuana alternatives." One of those herbs was a sizable bag of salvia divinorum, which I'd read about in Daniel Pinchbeck's book "Breaking Open the Head." He touted it as a visionary plant favored by native Mesoamericans. I like visions, and I like Mesoamerica, so I tried the salvia almost immediately after I bought it, smoking a small bowl at an outdoor Flaming Lips show -- you know, because the Flaming Lips are "trippy." No visions emerged, which, given my pathetic reasoning, is exactly what I deserved. I didn't even get a headache. The next time, I decided, I'd actually get some directions on how to use the drug, and then maybe I'd even follow them.

I put the salvia in my freezer and didn't touch it for almost two years. Then I had a free midnight, and it occurred to me to try some. I took a pinch of salvia from my bag, rolled it into a ball and stuck it under my tongue; all the Web sites say that sublingual absorption leads to stronger trips. It tasted bitter but not much worse than, say, collard greens. I gave it a chew and placed it under my tongue for another 30 seconds. I repeated this process a few times until I'd created a slightly acrid green brew in my mouth; I sloshed it around and kept chewing. By degrees, I felt nauseated, like I'd eaten vitamins on an empty stomach, but my gut held. After 20 minutes, I spit the whole megilla into the toilet, put some bhangra on the iPod, lay down on my guest bed, and closed my eyes.

Almost immediately, I had visions. Great, thick green vines, ancient beyond measure, stretched out into infinite space. A being that looked like an Aztec God flew above, spewing fire. I saw my head splitting open. Red goo poured out and melded into what appeared to be the cosmos. I had another vision, of me dancing with my son, which was a bit more pleasant. A large hole opened in the universe. I flew toward it. A beautiful woman in a white robe took my hand and guided me through. This, I later learned, was the "salvia spirit," who appears in most salvia-inspired visions, or at least the ones that get chronicled on Erowid. She's also repeatedly depicted in online "salvia art". I opened my eyes, and the trip was over. Ten minutes had passed.

The next night, I repeated the dose. While I had a few small visions, I mostly felt that my body was stretching out beyond its boundaries, moving into infinite space. The night after that, I did a third consecutive salvia chew. Nothing came of it, and around 1 a.m., I fell asleep.

Approximately two hours later, I snapped awake, aware that the room had shaken with a tremendous thud, as though something very heavy had landed. A massive stone warrior, looking vaguely like a lost piece of Mesoamerican art, stood in the middle of the room. "Don't mess with what you don't understand," he said to me. Terrified, I closed my eyes, and saw the woman again. I seem to recall begging her to show me the secrets of the universe. She spoke for the first time as well. "You take yourself too seriously," she said. The sensation of traveling through space returned, and then I fell asleep. The next morning, when I woke up, I was seized with the urge to see how my fantasy baseball team was doing.

On a scale of drug harshness, salvia falls on the mild end, stronger than weed but weaker than ecstasy, and it doesn't even register in the same league as the hard drugs like cocaine and heroin and meth. It should be classified as a mild hallucinogen. Well, perhaps "mild" isn't the right word, since the effects are intense, but it's short-lived. I haven't done psychedelic mushrooms or acid in nearly 20 years, but I remember those trips as being very, very long and annoyingly open-ended. You never knew exactly what you'd see or experience, though you were pretty much guaranteed to sweat a lot and have a nasty backache the next day. Salvia, on the other hand, is quick, focused and almost uniform in its effects. Salvia is non-toxic, and too intense to be addictive. Anyone who does it more than once a month should literally have their head examined.

People who hate drugs have been busy excoriating salvia this year. Salvia is currently illegal in Delaware, Florida, Kansas, Louisiana, Maine, North Dakota, Oklahoma, Tennessee and Virginia, and bills are on the table in many other states. In Ohio, a 12-year-old-boy, who said he uses salvia, shot and killed another boy, though there's no clear evidence that the shooter was on salvia at the time. In 2006, a Delaware teenager, who'd written about salvia in the past, committed suicide, prompting that state's ban. Tragic as those events may be for the people involved, salvia does not appear to have torn apart our precious social fabric. It barely even scratches around the edge. The "salvia trip video" is a standard bearer on YouTube, but you end up watching either giggling Jew-froed teenagers or bearded grown-ups falling back into their couch and saying, "Whoa." There are few things more boring than grainy footage of someone else's drug trip, and I don't think the proselytizing is going to get more high-end any time soon.

My recommendations, for all that they're worth, are as follows: Salvia isn't a drug for the young. No one under 21 should ever touch the stuff, and if anyone else is going to use it, do so wisely. First-timers might be helped to have a sober "guide," preferably one experienced with salvia, nearby. It's good to have someone to talk with when you're done; also, if you forgot water, you're going to want someone to get you some, because you'll come back really thirsty. Users know well enough not to make any big plans for a couple hours after the trip. The intense effects only last a short time, but you should never, ever drive after using salvia.

I've continued to do salvia a couple times a year. That's all I need, and all I can really handle. After I moved to Los Angeles, I spent some time looking around the drug boards for a reliable source. I found a vintage clothing store on Melrose with a quasi-legal head shop hidden in back, behind the winter-coat rack, the last place anyone ever looks in a Southern California vintage shop. There, a one-armed Lebanese man sold me a couple of discounted packets of 25X salvia extract, an extremely concentrated form of the drug that transports you to salvia land very quickly. One small pipeful, and you're gone.

"You need to be careful with this," he said.

By now, I've gotten over the intensity of the trip, the descent (or ascent) into another dimension. I know, for the most part, what to expect; it barely even seems weird to me anymore. Unlike my early trips, which were just random explorations, now I only go to the salvia if I have an intractable problem, if my life seems blocked somehow, or if I have a complicated existential question to ask. There's always a purpose, however obscure, for my visits.

I have a salvia routine. After the family has gone to sleep, and the house is very quiet, I go down to my basement office with a glass of ice water. I turn on some mellow music and sit in my big blue easy chair. A small pipeful of salvia concentrate waits for me. I smoke the bowl. My head and chest start to throb. I sink back in my chair and close my eyes, trying to keep my question of the day at the forefront of my thoughts. A trip through the vines follows. I pass a phalanx of guards, who look like the caterpillar in the "Alice in Wonderland" cartoon. Sometimes, I travel over arid plains or behold mountain views of indescribable beauty. But eventually, I always get to that secluded glen where the salvia spirit is waiting, on a vine-covered throne. She's usually in a damn good mood, and is always glad to see me. We commune for a while, she shows me unusual things, and while I don't directly ask my question or express my concern, I keep it floating around the edges of consciousness. She's always gently mocking, in a "foolish human!" kind of way, and her response always leaves me feeling a little bit better.

Gradually, the visions fade, my heart starts beating more normally, and I open my eyes. For a few minutes, everything seems gauzy and pixelated, as though I can nearly see the other world just beyond my field of perception. Then the salvia trip ends without harm to others, or to myself.