Maddin and Herzog: Brothers of the ice! 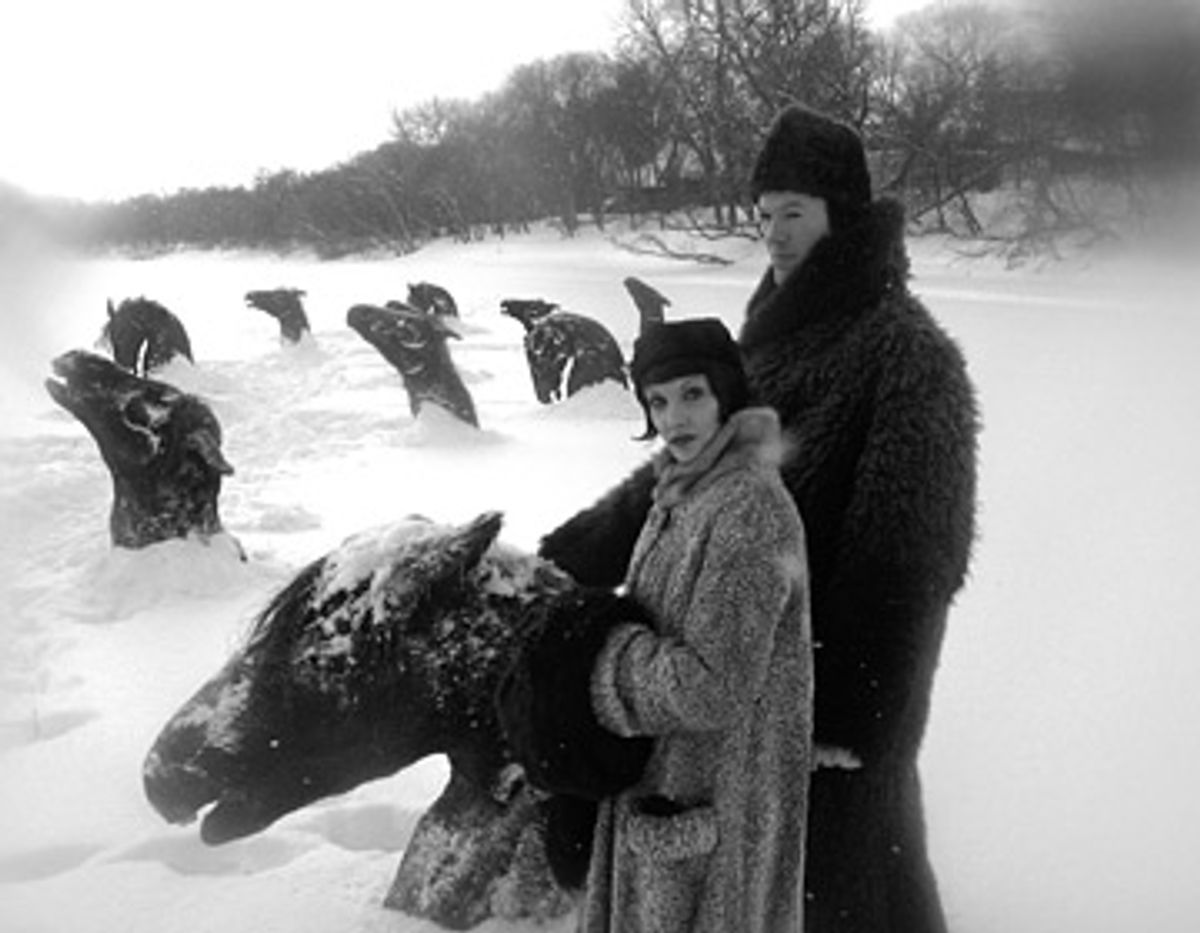 A scene from "My Winnipeg."

I don't actually believe that Canadian filmmaker Guy Maddin was born in the dressing room of the since-demolished Winnipeg Arena, or that Manitoba's capital city has 10 times the sleepwalking rate of anywhere else on the planet, or that a group of horses fleeing a Winnipeg racetrack fire in 1926 were frozen to death in the ice of the Red River and remained locked there in horrific postures all winter, creating a memento-mori make-out zone for teenagers. All these things are presented, more or less with a straight face, in "My Winnipeg," Maddin's phantasmagorical pseudo-documentary about his wintry hometown, but that doesn't make them true.

But do I actually believe, for instance, that Weddell seals beneath the Ross Sea ice of Antarctica sing to each other in eerie coos, clicks and whirs that sound pretty much "like Pink Floyd or something," as one scientist says? Or that some penguins go insane and wander off to die in the arid Antarctic interior, many miles from the sea? Or that a giant helium balloon, assembled in the largest building on the Antarctic continent, is being sent 17 miles up into the stratosphere to observe an almost undetectable subatomic particle that travels at the speed of light, has no electrical charge and almost no mass, and is described by physicists in tones of near-theological reverence? I suppose I do believe those things, although I surely do not understand them, and therein lies the difference between "My Winnipeg" and Werner Herzog's new film, "Encounters at the End of the World."

It's only a calendar accident that has perhaps the film world's two most notable obsessives simultaneously releasing films made in very cold climates, but it's an instructive one. Both directors make movies that are indisputably personal, and lie somewhere between autobiography and self-devouring; each man, you could say, is conducting a cinematic inquiry into the origins of his own work. Both of these pictures are funny and mournful by turns, and both are episodic affairs, narrated in voice-over by their directors (that's nothing new for Herzog, but a first for Maddin), that make almost no effort to tell a conventional story. You can use critical buzzwords like "distinctive" and "visionary" to describe both of these guys, and I probably have. But that only serves to conceal how fundamentally different they are.

For better or worse, Guy Maddin is pretty much his own self-invented phenomenon. If you're the sort of person who takes in odd, arty movies then you already have an opinion about him; if you're not and you don't, I hardly know where to begin. Most of his features, from the 2006 "Brand Upon the Brain!" through "The Saddest Music in the World" and "Cowards Bend the Knee" clear back to his 1988 "Tales From the Gimli Hospital," are black-and-white silents or intentionally awkward talkies, which use the filmmaking tools and narrative modes of the 1920s and early '30s as a passageway to the Freudian subconscious, with all its alluring and/or threatening specters. They're goofy, gorgeous, unstable movies, where it's really hard to divine the balance between mournful introspection and New Age psycho-bullshit, between film-dork imitation and batshit craziness.

All along, Maddin has been spelunking in the basement of his own erotic, Oedipal preoccupations; isn't that what all artists do? But I'd argue that his movies are the funniest and most engaging when he free-associates through various deranged genre conventions, like the gender-switching boys' adventure tale of "Brand Upon the Brain!" or the lesbo-vampire ballet of "Dracula: Pages From a Virgin's Diary." If "My Winnipeg" purports to tell the story of a guy named Guy Maddin and his failed attempts to break away from his frozen, somnambulist hometown, I enjoyed it most during its detours into homoerotic hockey-porn or, most deliriously, into a séance involving the Royal Winnipeg Ballet and the spirits of a Cree Indian maiden and a sacred gay buffalo named Broken Head.

Like all poetic inward journeys, "My Winnipeg" is likely to resonate with sympathetic viewers in unexpected ways. In viewing his apparently placid prairie city, and his apparently placid prairie childhood, as an intensely symbolic landscape of mystery and terror, Maddin invites all of us to view our own equally ordinary lives in the same light. Does the fork of the Red River and the Assiniboine at Winnipeg conceal another, more mystical pair of underground rivers? Do the back alleys of Winnipeg comprise an alternate, night-world version of the city, one rarely spoken of? It is Maddin's peculiar genius to take such sophomoric fragments of spirituality -- and of awkward, preteen sexuality -- and make misshapen but beautiful movies from them.

For much of "My Winnipeg" it seems as if Maddin is trying to find an elegant way to complain about the fact that his city, like every other in North America, has surrendered most of its soul to an implacable logic of progress and development. In traveling to the South Pole to meet the Weddell seals and the demented penguins and the itinerant philosopher-dishwashers who populate the place -- something that for many reasons Maddin would never try, or dare, to do -- Werner Herzog is at least arguably after something bigger and more ineffable.

Herzog's title, "Encounters at the End of the World," has a double meaning that becomes increasingly obvious as you watch the film. Many of the people he meets at McMurdo Station, the United States scientific base that is Antarctica's largest settlement, are wandering oddballs who have busted the tether to civilization, which means the German-born filmmaker is very much in his element. And both metaphorically and literally -- in terms of the awe-inspiring Antarctic wilderness on the screen and the scientific research being conducted there -- Herzog is engaging the idea of the end of human civilization, and the accompanying realization that in geological and cosmological terms the entirety of human history will be no more than a spark that flickers and then goes out.

Is that depressing? Not in Herzog's vision, which captures the magnificence of the Antarctic landscape and seascape -- the underwater photography by Henry Kaiser, who also composed the score, is amazing -- as a kind of divine wonder, a tribute to the genius of a God the director does not believe in. Herzog's documentaries have edged ever closer to a religious awe that is non-theistic or atheistic in nature over the years, and I see no contradiction or paradox in that. (It's no accident that in 2003 he made "Wheel of Time," a film about Buddhist ritual. I'm sure Herzog doesn't hold with Buddhism or any other creed, but that's the only major world religion that resists both the notion of a creator-deity and the centrality of human life.)

Many of the people Herzog meets in "Encounters at the End of the World" are characters Maddin could never dream up, like the pipe-fitter who says he is descended from Aztec royalty, the philosopher turned forklift driver or the pathologically depressed cellular biologist who describes undersea life as a zone of horrible warfare that sent our primordial ancestors wriggling up onto the shore in terror. Life may not have changed fundamentally in the millions of years since then, Herzog seems to suggest, only now we have developed a consciousness that can apprehend shards of elusive meaning, strands of the universe's collective tissue, in the songs of the seals, the lightning-like paths of the neutrinos, the lava lake in the crater of Mt. Erebus.

In the hands of a lesser filmmaker "Encounters at the End of the World" could have been a quirky human-interest documentary, a National Geographic special or a New Age-flavored meditation on the mysteries of nature and the interconnectedness of everything. Perhaps only Herzog, veering from disagreeable crank to generous shaman and back again as he does, could combine all three in such an acrid, beautiful mixture. If this movie is the culmination of Herzog's recent documentary work, and one of the films he'll be remembered for, its apotheosis comes in a long, long shot of that lone, lost penguin wandering off into the Antarctic interior, which at first is ridiculous and then tragic and then noble and then all those things at once. Don't ask who that little guy waddling off toward his lonely destiny is; you already know.

"My Winnipeg" is now playing at the IFC Center and Lincoln Plaza Cinemas in New York, with wider release to follow. It's also available on-demand through IFC In Theaters on many cable TV systems.

Beyond The Multiplex Canada Documentaries Movies