Yes, it's based on a doll. But this gentle-spirited movie makes the past come alive. 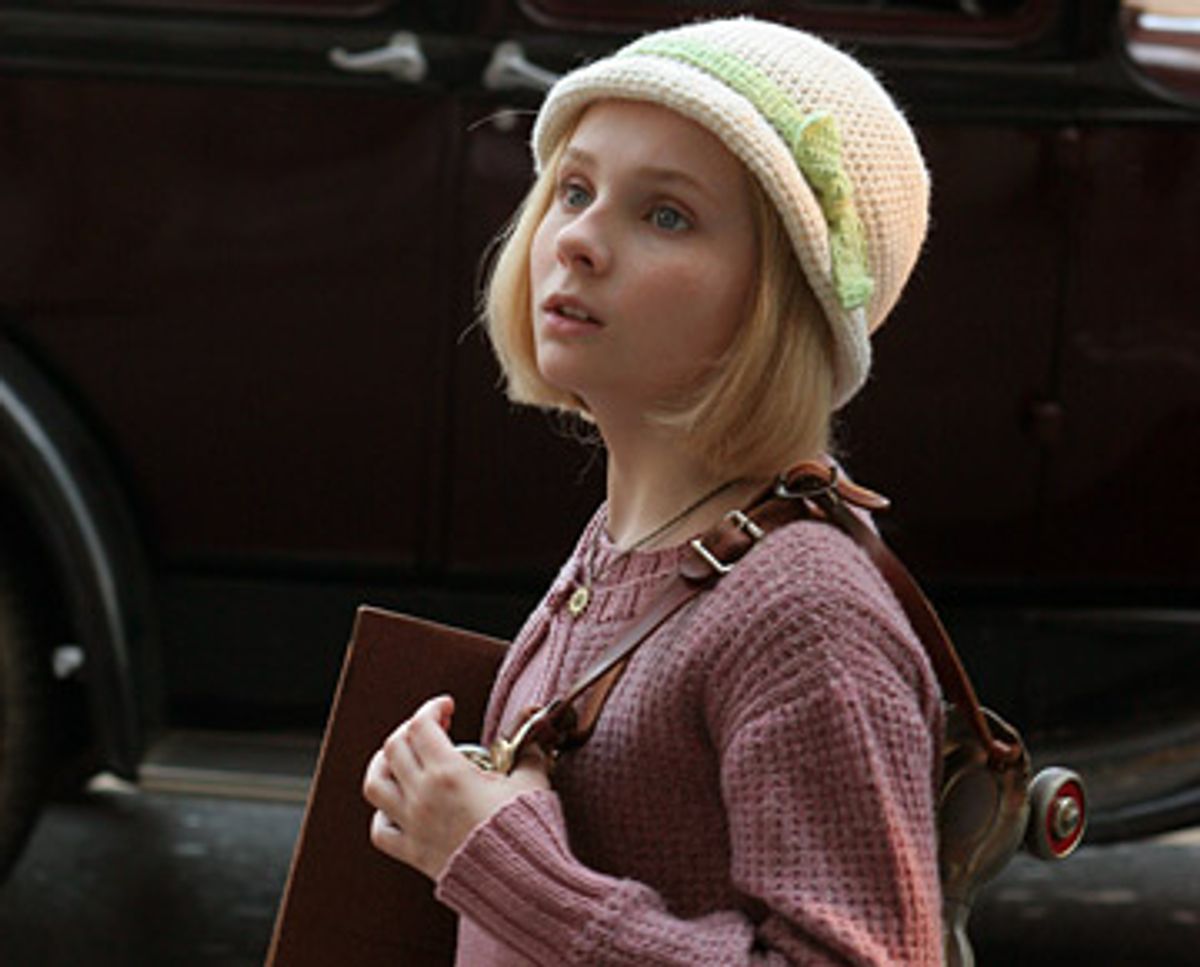 Though many of us who are over 40 didn't live through the Depression, most of us couldn't fully escape it: Our parents kept it alive for us, with stories about having to get through the day without having enough to eat, about how their out-of-work neighbors, or maybe even their own fathers, would sit for hours on front stoops with little to do except make chain belts out of cigarette packages, about Christmases when getting a single orange in your stocking was a big deal. Hearing those stories firsthand, from people we knew and loved, may have helped the past -- and this particularly rough patch in recent world history -- seem like less of an abstraction. As my friend the critic Howard Hampton once lamented, with so much nostalgia around us -- in a climate where the TV shows of our childhood may be remembered with deep fondness, but old movies often get laughed at for being corny or overwrought -- it's easy to forget that the past is a real place.

The heroine of "Kit Kittredge: An American Girl" is a character based on a doll, part of the American Girl toy phenomenon, which also includes a hugely popular series of history-based fiction books for young girls. (I don't personally know any young boys who read them, although there's of course no reason they couldn't, or shouldn't.) Kit Kittredge, the doll and the character, is a Depression-era 9-year-old -- her family is financially comfortable, but not rich -- who dreams of being a reporter. In the movie, she's played by Abigail Breslin, sporting a blond Buster Brown haircut and a series of cloche hats, authentic to the style of the day. Her mother, played by Julia Ormond, is a kindhearted soul who agrees to give two young wandering hobos, Will and Countee (Max Thieriot and Willow Smith, respectively), some work around the house in exchange for meals. Her father (Chris O'Donnell) runs a car dealership, although his business, too, falls on hard times: He's forced to leave the family's Cincinnati home to find work in Chicago, a sudden change that requires some belt tightening at home. To make the family's mortgage payments, Kit and her mother must take in boarders, including one of Kit's schoolmates, Stirling (Zach Mills). The adjustments make Kit uncomfortable. At one point, Kit -- who has been watching, sympathetic but relatively protected, as her friends' families have faced serious financial troubles -- expresses dismay that strangers are going to be living in their house and, worse yet, sitting on their sofa.

"Kit Kittredge" -- directed by Patricia Rozema ("Mansfield Park," "I've Heard the Mermaids Singing") and adapted by Ann Peacock from stories written by Valerie Tripp -- is sometimes sentimental and sometimes melodramatic. Then again, it's a G-rated picture based on a doll -- not "They Shoot Horses, Don't They?" To modern children, the Depression (something that happened even before households had TVs, much less DVD players) must seem like an abstraction -- how could it not be? What's remarkable about "Kit Kittredge" is the way it strives for emotional authenticity, and often achieves it. The picture manages to give a sense of what people's lives were like during the Depression, at least as far as those of us who didn't actually live through it can understand from the stories our parents told us.

"Kit Kittredge" doesn't shy away from exploring the fact that children are unable to insulate themselves from financial hardship; they're vulnerable in a way that grown-ups aren't. At one point Kit shudders when she thinks of how a friend's parents have had to raise chickens (and sell their eggs) to make ends meet. When her mother is forced to do the same, she's temporarily mortified -- the picture doesn't make the mistake of turning Kit into a sunny goody-two-shoes. Peacock and Rozema are also attuned to the ways in which broken families -- that is, families that are broken for any reason -- can both cause suffering to kids and make them more resilient. In one of the movie's best scenes, Kit's young friend Stirling (a sensible, sensitive kid with the biggest ears you've ever seen -- and he knows it) confesses to her how difficult it has been to keep up his mother's morale (she's played by the always-wonderful Glenne Headly) since his father left the family. Stirling goes to great lengths -- greater lengths than any kid should need to resort to -- to protect his mother.

As Breslin plays her, Kit is a bright, perceptive kid. But she has also been somewhat sheltered. "Kit Kittredge" is a gentle-spirited movie that also acknowledges the fact that we can't -- and shouldn't -- protect kids from everything. At one point Kit visits the "hobo jungle" where Will and Countee live, a shantytown where a group of homeless people share what little food they have and somehow manage to survive. Kit isn't written, or played, as a magnanimous benefactor. She's just a kid, cautiously pedaling her way around the learning curve of pre-adulthood like everyone else. But the difference between her home life and the way Will and Countee live isn't lost on her.

It's a shame that "Kit Kittredge" isn't slightly better made. Some of Rozema's filmmaking choices are perplexing, which is a kind word for "inept": She sometimes opts for weird three-quarter back views of characters as they're speaking -- why? But the picture (shot by David Boyd, with production design by Peter Cosco) does have a pleasingly burnished period look. It also features, in small but nicely shaped roles, a number of performers who are more than character actors but not quite stars: Stanley Tucci plays a businesslike illusionist; Joan Cusack is a ditzy mobile librarian; Jane Krakowski is a hotsy-totsy dance instructor in tap shoes and satiny shorts.

And then there's Wallace Shawn as the newspaper editor who gives the ambitious, and somewhat annoying, Kit her first big break. Shawn gets a great entrance -- we hear his voice, and glimpse his antic, rounded silhouette through a frosted glass door, before we see him -- and a charming fillip at the end. He's also a good example of the way the picture takes familiar character templates and gives them recognizably human contours. Roughly speaking, the characters in "Kit Kittredge" may be stereotypes, but they're stereotypes with soul. And they live in a very real place.