Barack Obama is a Muslim, and other stories

The Democratic nominee's campaign is working overtime to combat rumors -- yet misinformation is still running rampant across the Internet. 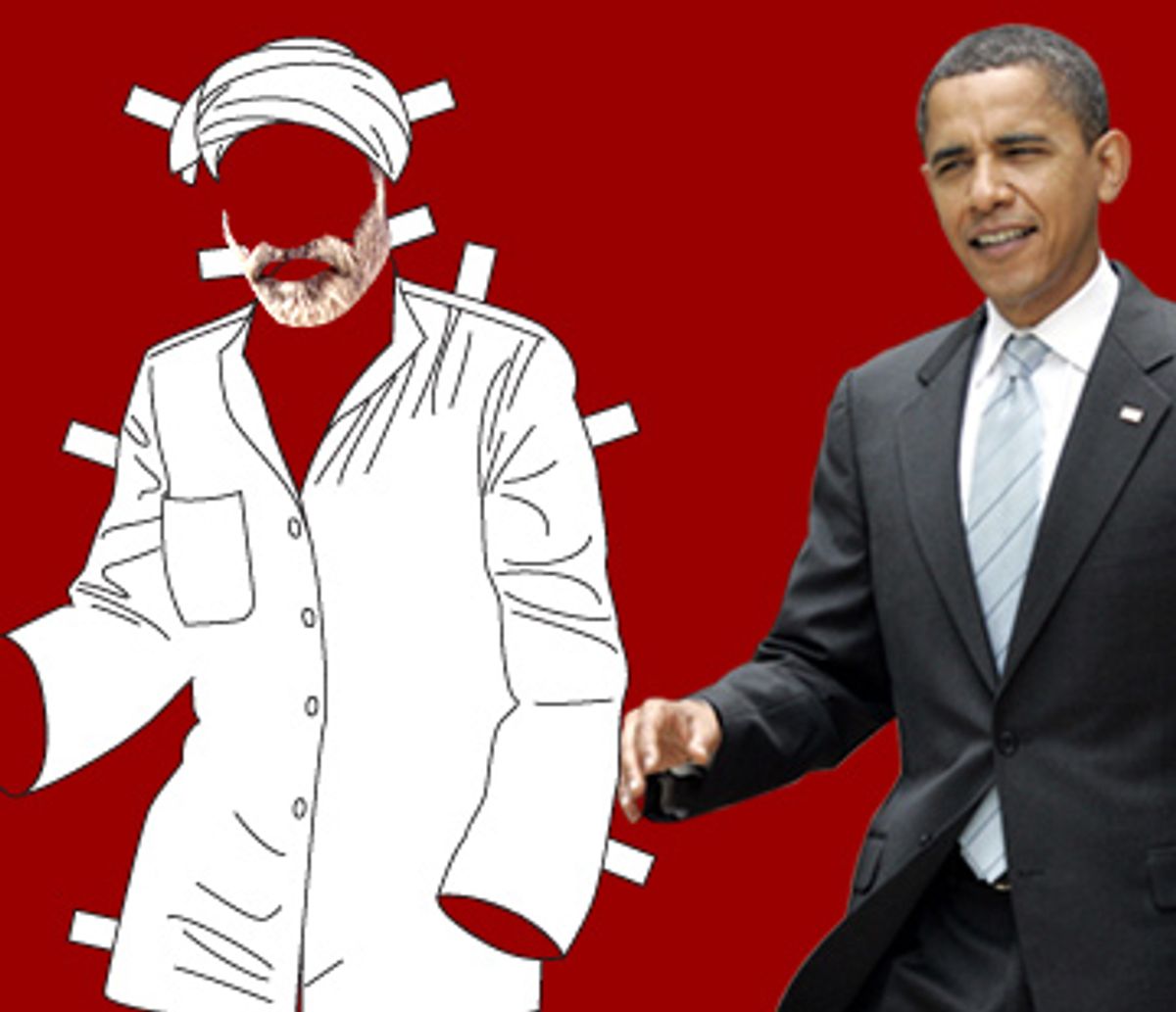 Barack Obama has been running for president for 16 months. He's written two best-selling books, has already spent more money on TV ads in most states than any presidential candidate in history and employs about 1,000 paid staffers -- and a legion of unpaid volunteers -- working around the clock to spread the word about him.

You'd think that would be enough to get some basic facts about the guy lodged in voters' heads. But you'd be wrong. In recent focus groups in key battleground states, participants told Democratic pollsters matter-of-factly that Obama, if elected, would refuse to be sworn in on the Bible. In one group conducted on behalf of the University of Pennsylvania's Annenberg Public Policy Center, seven out of 12 independent Virginia voters taking part said they thought Obama was a Muslim (he isn't), and some questioned his patriotism, saying he needs to prove he's "for America." That particular clump of "low information" voters was probably an outlier, but a survey in March found 13 percent of voters -- up 5 points from the previous poll -- shared their belief that Obama was Muslim. Another 44 percent weren't sure what his faith was. And e-mails are flying around the Internet with winking implications that Obama isn't really American (and, worse than that, he's African, if you know what the writer means).

Obama's multiracial background and globe-traveling childhood are, without a doubt, part of his appeal for millions of voters. But as the first black candidate nominated by a major party -- and as a relative newcomer to the national scene, unknown to anyone but political junkies just a few years ago -- Obama will probably have to work much harder tamping down whisper campaigns and rumors than any previous would-be president. "There are a lot of people out there with certain misconceptions," said one Democratic strategist, who asked for anonymity to talk in more detail about what voters have been telling private pollsters. "From the broad to the specific to the crazy, there's all sorts of that kind of stuff still out there ... He is a somewhat exotic figure in the sense that he is the first African-American (nominee), he does have an unusual first and middle name. He even has an unusual last name, for that matter."

For most of the winter and spring, Obama aides pushed back quietly -- if at all -- against some of the weirder rumors about him, preferring not to draw attention to them, just as they did not publicize incidents of racism on the campaign trail. They did not want primary voters worrying about their candidate's vulnerability to innuendo in the general election. Now that Obama is the presumptive nominee, the response to the rumors has gone aboveground. The campaign unveiled a Web site, Fight the Smears, where aides can repeat -- and debunk -- some of the allegations making their way around the Internet. "Whenever challenged with these lies, we will aggressively push back with the truth and help our supporters debunk the false rumors floating around the Internet," spokesman Tommy Vietor said. "It's not enough to just know the truth, we have to be proactive and fight back."

That's not the traditional approach in politics when confronted with lies (nor is it the traditional way to fight urban legends). "The rule that I was sort of raised on was ... you never respond at greater volume and in a bigger medium," said Mark Blumenthal, editor of Pollster.com and a longtime Democratic pollster. "The problem with that is that no one ever held a press conference [to say Obama is a Muslim], there were no ads, no campaigns embraced the notion of Obama as Muslim, yet it's everywhere." Obama may be running a Web 2.0 campaign, but the most damaging attacks on him have basically been a throwback to the earliest days of the Internet -- e-mail chain letters. (A trove of the chain e-mails and Obama rumors can be found here.) "If the information can be disseminated that easily, the old rule can't apply," Blumenthal said. "You cannot be passive and be reluctant to engage."

The campaign's new strategy for dealing with rumors may be driven by the sheer persistence of the false information. That isn't necessarily surprising. "For independent voters, they're just starting to tune in to the process," said Peter Hart, a Democratic pollster whose focus groups for the Annenberg Center have turned up serious gaps in what voters know about Obama's life. "And then they hear what I call an urban legend, and they just sort of take that in as fact."

Voters may know just enough about Obama to buy into the lies. "Obama has very high name recognition -- everybody knows who he is," Blumenthal said. "They know he's black, they know he's a senator, they know he gives good speeches, that he's inspirational. A lot of folks know he has this controversial preacher, or he did. I'm not sure there's that much more knowledge about him." Indeed, some of the e-mails and Web sites Obama is trying to fight don't even rely on false information. An e-mail circulating recently featured photos of Obama's Kenyan family (all of them identified correctly, unlike a blatantly racist version that made the rounds earlier this spring), pointing out that his father and stepfather were both Muslims and quoting Obama's own book. The effect is clearly negative, but because it doesn't allege that Michelle Obama called anyone "whitey," it won't show up on Fight the Smears.

Others, though, don't bother sticking to the truth. "There's been a concerted effort to misrepresent who he is," the Democratic strategist who requested anonymity said. "Extensive e-mail campaigns, talk radio campaigns designed to sow the seeds of doubt, designed to traffic in misinformation." The e-mails spread virally through existing social networks and build on the limited things people already know -- in a sort of sinister doppelgänger of the way Obama's campaign has built its grass-roots organization. Democratic pollsters say that it's nearly impossible to trace these e-mails back to their sources. So if you've gotten a few e-mails saying (falsely) that Obama refuses to say the Pledge of Allegiance or won't salute the flag, and then you hear something on the news about a debate where the issue came up, the next thing you know, you're telling a focus group, "I worry about his allegiance to the country." Which is precisely what some Democratic pollsters say they're hearing in critical states.

John McCain's campaign says it won't traffic in these sort of rumors, and McCain staffers say they doubt many people will believe them anyway. Aides for McCain and the Republican National Committee have been careful all year to distance themselves from questions about Obama's origins. But the chain e-mails are raising those questions for them, and simply pointing out that the rumors about Obama are false probably won't make them go away. "There are still people who believe that Saddam Hussein was behind Sept. 11," the Democratic strategist said. "Moving people off of some belief they have, even if it's not supported by any fact, can be a difficult thing to do." Still, it's probably not too late for Obama to define himself in voters' minds before their in boxes do it for him. Though it may not feel that way for activists, operatives or journalists, it's still early in the election. "(Voters) need what I call the photo journal," Hart said. "Where they see him trick-or-treating with his children, where they see him at Thanksgiving, they see him at Easter and they see him at Memorial Day."

And as if on cue, Obama's newest TV ad -- the first one aimed at the general election -- is titled "Country I Love" and plays up his biography. "America is a country of strong families and strong values. My life's been blessed by both," Obama says, flag pin on his lapel, before a montage of photos showing a young Barack with his white relatives. "If I have the honor of taking the oath of office as president, it will be with a deep and abiding faith in the country I love." If he does have that honor, it may also be because his campaign winds up winning the online propaganda war. (He will also take the oath on a Bible.)