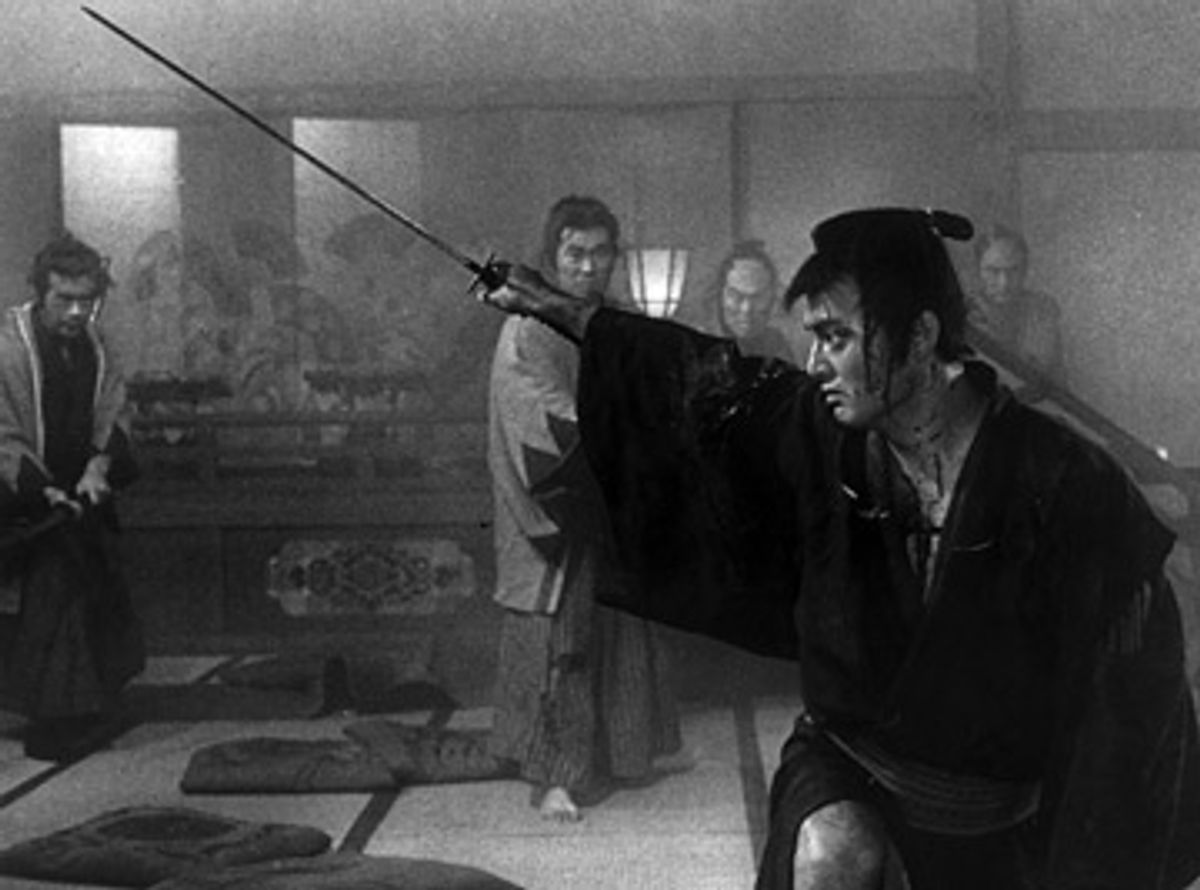 You have to be deeply into Japanese film to know about the actor Tatsuya Nakadai, subject of a massive retrospective at New York's Film Forum that is likely to show up at other venues (at least in part) in coming months. But once you see Nakadai's best movies of the 1960s and '70s you get why he's a living legend in the Land of the Rising Sun. A handsome, roguish fellow equally well suited for hero or villain roles, and best known for playing characters plagued by doubt or moral uncertainty, Nakadai has been called the Japanese equivalent of Marlon Brando or Steve McQueen.

As that might suggest, Nakadai is identified with the massive social changes of postwar Japan, but calling him a rebel or bad boy isn't quite accurate or sufficient. For one thing, unlike most American stars, Nakadai received rigorous, old-fashioned theatrical training, in his case in Japan's early 20th century Shingeki tradition. As director Masaki Kobayashi -- who presided over many of Nakadai's greatest roles -- once observed, this gave him a unique ability to span the generations in Japan. If Nakadai clearly appealed to the Westernized young people who grew up after Japan's crushing defeat in World War II, many older Japanese saw in him the flawed nobility of a lost era.

I've now seen about two-thirds of Kobayashi's devastating, 10-hour antiwar epic, "The Human Condition" (1959-61), the film that first made Nakadai a star, so I'll have to get back to you on that one. (Unseen on American screens in 20 years and unavailable on home video, it opens July 18 at Film Forum.) Let's say for now that the movie is a rich but often arduous experience, and Nakadai makes a magnificent tragic hero, as a 1940s liberal who opposes Japan's war effort but is gradually broken under the social system's wheel.

This retrospective includes many other films rarely seen in the United States and unreleased on DVD, along with some more familiar titles. While officially a tribute to Nakadai, it spans so many trends, themes and directors that it encompasses the best years and best films of postwar Japanese cinema, one of the art form's high-water marks. It begins this weekend with Kobayashi's 1962 "Harakiri" (aka "Seppuku"), starring Nakadai as a destitute medieval ronin seeking a feudal lord's permission to commit ritual suicide on his property.

Following that, next Monday and Tuesday, is Hiroshi Teshigahara's 1966 "The Face of Another," surely one of the strangest films in the long and strange history of Japanese cinema, and a good indication of Nakadai's range. He plays a businessman with a disfigured face who becomes the subject of a bizarre surgical-psychiatric experiment, but the story is more expressionistic and symbolic than that suggests, and under the surface Teshigahara is launching an almost Dadaist attack against the conformist, quasi-fascist nature of Japanese society.

For hardcore Japanese movie buffs, though, the more obscure and otherwise unavailable pictures are the real draw. These include Kobayashi's 1957 "Black River" (a pessimistic, realistic yarn about postwar corruption under the American occupation); "Immortal Love," a bitter family saga by little-known director Keisuke Kinoshita; and three films by the late, great Kon Ichikawa, "Conflagration" (1958), "Odd Obsession" (1959) and "I Am a Cat" (1975). I haven't seen any of those, but if they turn out to be amazing I'll let you know. As I say, this retrospective ought to show up at other film series and art museums around the country eventually -- but only New Yorkers will get to meet the 75-year-old Nakadai himself, who'll appear at Film Forum on Tuesday night.