Why Clinton voters will come back to the fold 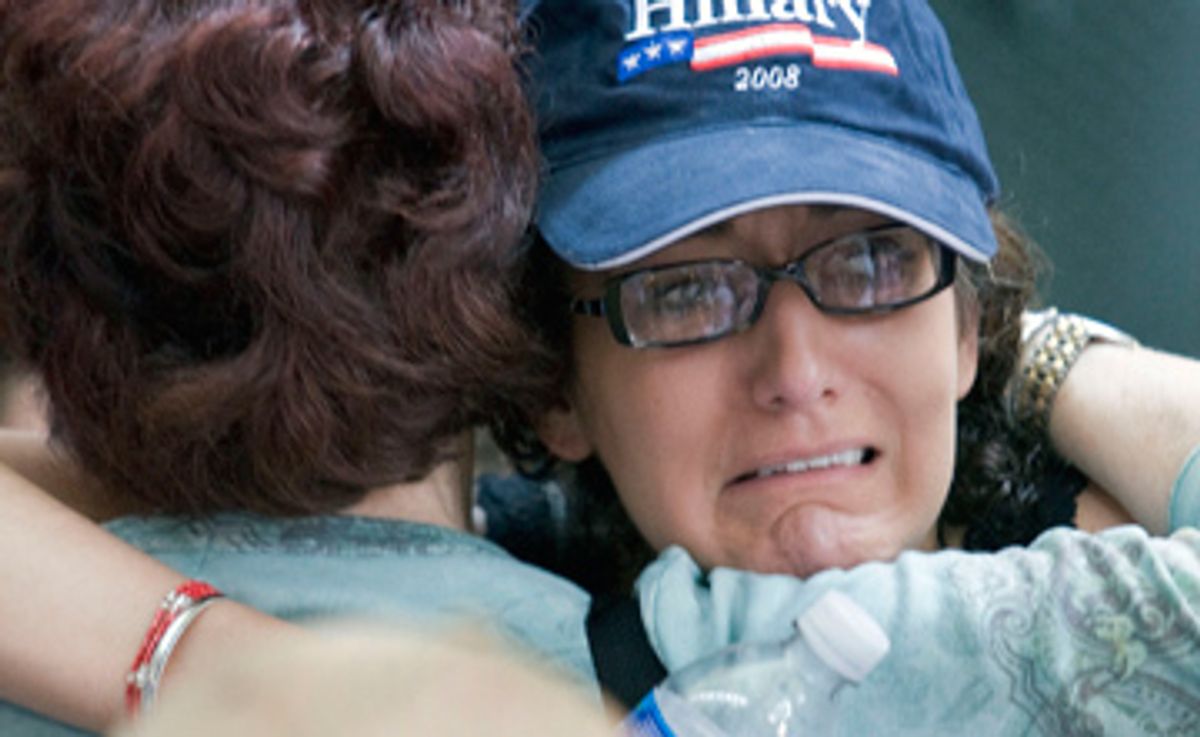 As an empty threat, it ranks right up there with "Eat your spinach now or your mother and I won't pay for college" or even George W. Bush's taunting promise to get Osama bin Laden "dead or alive." During the post-primary news lull, ardent Hillary Clinton supporters have managed to linger in the spotlight with their over-hyped warnings that they intend to sit on their hands or even bolt to John McCain if they are not wooed and won over by Barack Obama.

Now that the Obama campaign has announced that the Democratic victor and his vanquished foe will campaign together on Friday, brace yourself for the frenzied over-analysis of every sound bite of banter, every muscle twitch of body language during the Barack-and-Hillary show. The dominant story line -- and you can almost see the newspaper headlines and the crawl running across the bottom of TV screens -- is guaranteed to be (envision the furrowed brows of the on-air pundits): Was the joint appearance enough to win over the hardcore Hillary holdouts?

The answer is an obvious "yes" unless Obama starts channeling his inner Rush Limbaugh by ranting about "feminazis." Despite the efforts of Clinton activists like clothing entrepreneur Susie Tompkins Buell to highlight feminist grievances with the nomination process, the truth is that the Clintonites really have no alternative but to toe the party line. And there is a strong presumption among political scientists -- based on a landmark study from the 1970s and buttressed by statistical analyses of polling data from other presidential elections -- that voters rarely carry resentments from the primaries into the voting booths in November.

So after a nomination fight without an overriding issue, there is absolutely no ideological reason -- beyond ruffled feelings -- for, say, college-educated feminist voters to vote Republican. As Monika McDermott, a political science professor and pollster at the University of Connecticut, puts it, "If the history of the past 20 years of voting has shown us anything, it is that women are more likely to vote Democratic and these particular [pro-Hillary] women are hardcore Democrats. They will get over how Hillary was treated very quickly when they realize that the alternative to Obama is John McCain."

Pre-convention polling tends to magnify the potential for defections because the standard "if the election were held today …" question asks voters to jump ahead of reality and imagine their behavior at the end of an arduous campaign in November. For example, an ABC News/Washington Post Poll last week found that 24 percent of the Democrats who backed Clinton prefer McCain over Obama. But these numbers will certainly decline as base Democrats gravitate to their party's nominee with increasing enthusiasm. "You are asking people to tell what they're going to do six months from now and the circumstances of six months down the road aren't present," says Lonna Atkeson, a political science professor at the University of New Mexico. "So you're asking them to base their decision six months from now on the data that they have today. And that's very hypothetical and unrealistic."

Atkeson is a strong proponent of the counterintuitive theory that a fractious presidential primary fight actually ends up helping a political party because it increases turnout and mobilizes more activists. And she has found a consistent pattern over the past three decades that the vast majority of voters do not abandon their party just because their favorite candidate lost the nomination. A statistical analysis of 1984 polling data by Atkeson found that by the time of the Democratic Convention former supporters of Gary Hart and Jesse Jackson had a significantly more positive opinion of Walter Mondale, now that he was their party's nominee, than during the primaries. But Atkeson's most persuasive evidence comes by way of an academic researcher who in 1976 polled the same group of voters (in Los Angeles and Erie, Pa.) six times from the early primaries to the November election to see how their candidate preferences evolved.

This kind of repetitive polling is a rarity akin to finding a unicorn in your backyard. Luckily, 1976 was the perfect year to test what happens to sore-loser voters after the primaries since there were vigorous nomination fights in both parties. Despite a scorched-earth primary battle between President Jerry Ford and conservative challenger Ronald Reagan on the Republican side and widespread Democratic doubts about Jimmy Carter, the data demonstrated an unequivocal picture of party loyalty as the ties that ultimately bind in November.

Atkeson used this treasure trove of polling data to see whether voters who had initially backed one of the losing 1976 Democrats (such as Scoop Jackson and Mo Udall) in the primaries changed their assessment of Carter after he became the de facto nominee. As Atkeson writes in an unpublished paper, "Differences between the winner and loser backer groups [in the primaries] began to decline sharply in August after both party conventions ... In October, during the heart of the general election period, winning and losing Democratic factions had become very similar in their evaluations of Carter." The same pattern emerged on the GOP side in 1976, despite the stark differences between Ford and Reagan, both ideologically and stylistically. Atkeson noted that while Carter's popularity among Democrats increased during the campaign, "Reagan supporters showed an even more dramatic improvement in their overall evaluation of Ford."

A common theory is that disgruntled voters, troubled by the direction of their party, end up staying home in November. But with a record-smashing 36 million Democrats voting in the presidential primaries, this is not shaping up as a political year in which anyone will neglect to vote because, say, Whole Foods was having a sale on organic olive oil that day. "If there is a demographic group that isn't going to vote, it certainly isn't the hardcore Hillary types who score highly on all the indicators of likely voting," says Bill Mayer, a political scientist at Northeastern University.

What gets trickier to fathom is whether Obama will feel that political considerations demand that he pick Clinton as his running mate. The ABC News/Washington Post Poll found that a Barack-Hillary ticket would be a wash, with as many voters attracted (23 percent) by the notion as repelled (22 percent). But perhaps the most revealing number in the survey was the 52 percent who said that tapping Clinton would not have any bearing on how they planned to vote. As Atkeson puts it, "I always go with the data and there is just no data that says that vice-presidential candidates make a difference."

Party unity is never total -- and there certainly are blue-collar Democrats who opted for Clinton in the primaries because she was a placeholder for their qualms about Obama. But for over-the-hill-with Hillary voters, passionate about the notion of a woman president or beguiled by all things Clinton, there will be no dramatic renunciation scene in their political future. Virtually all of them will be voting for Obama, whether they know it now or not. For a political party is a bit like Motel Six, where there is always a light on to guide errant voters home in the dark.