Rob Portman is a Bush loyalist from the key swing state, who's even served as a John Edwards stand-in. Could he end up as McCain's running mate? 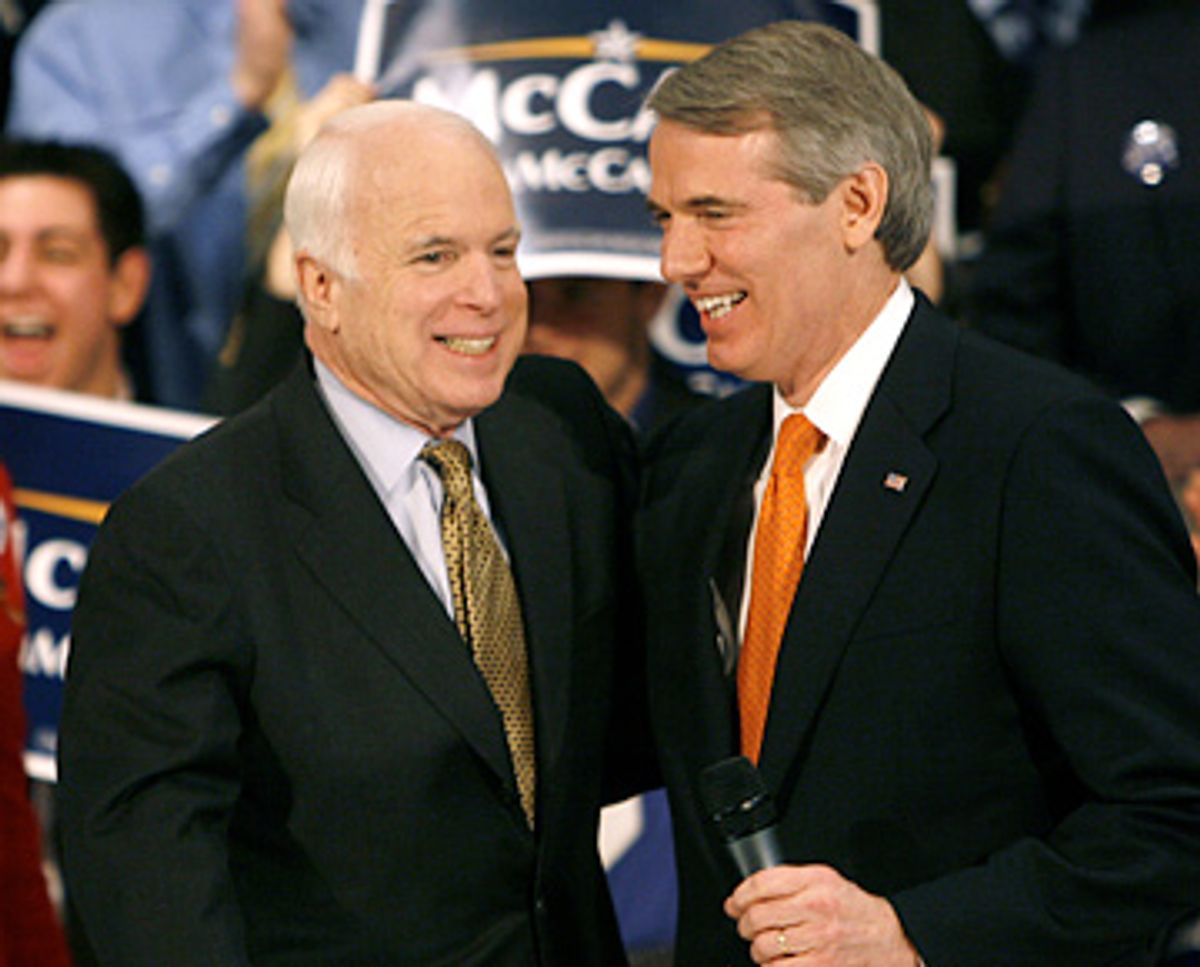 When Republicans needed someone to play the role of Joe Lieberman in debate practice sessions with Dick Cheney in 2000, they turned to Rob Portman, a young House member from the Cincinnati area who had worked for the first President Bush. Four years later, when they needed a John Edwards stand-in, they hit up Portman up. (By then, he was one of the George W. Bush administration's chief liaisons in Congress and a key player in Bush's reelection campaign in Ohio.)

There are enough names being floated around as possible vice presidents these days that a list of politicians who aren't on someone's short list would probably be shorter than, well, the short list. But Portman, 52, who went on to become the U.S. trade representative and to head the White House Office of Management and Budget after helping Bush win a second term, may have a leg up on all of the others jockeying behind the scenes to become John McCain's running mate.

"It's a weird kind of situation, where I've already been a V.P. nominee -- it was just for the other party," Portman said, laughing, in an interview. "Twice."

That alone won't be enough to get him picked, of course, and officially, Portman says he isn't even really in the running. He left OMB last year and moved back to Ohio, presumably to run for something else there -- the Senate? Governor? -- but he hasn't made any announcements yet about further political aspirations. "I'm not eager to go back to Washington right now," he said. "I do love public service and I hope to have the opportunity to serve again someday, but right now it's really great to be home with three teenagers."

But that's the line you're supposed to take if you want to wind up on the ticket -- obvious public campaigning for the job is a good way to get disqualified. And Portman, whose loyalty to the Bush administration earned him plenty of backers in GOP circles, has clearly been keeping himself busy doing the kinds of things any would-be McCain vice president would be expected to do. He said he has given "three dozen" political speeches this year, including showing up at 15 Lincoln Day fundraising dinners for local Ohio Republican Party chapters. (But who's counting?) He's been an aggressive surrogate for McCain on economic issues, hammering Barack Obama on trade policy and taxes in conference calls with the press and keeping up steady appearances on the cable news circuit. This week, he's joining McCain on the "Straight Talk Express" for a campaign swing through Ohio -- a state that might just see some action this fall.

As McCain and a small klatch of advisors pick his running mate, arguably the stakes are higher than usual. Whoever winds up on the ticket this year will likely become the front-runner for the next Republican presidential nomination in 2012 -- possibly even if McCain wins the White House this year, as he's indicated that he might only serve one term. McCain may also try to balance out concerns over his own age (he'll be 72 by the election) by tapping a younger vice-presidential nominee. (Doing that without undermining one of his basic attacks against Obama -- that Obama is just not ready to lead -- might be tough.)

Portman is getting some buzz, among the GOP governors and ex-governors who also pop up in the summer's political gossip. One Republican strategist grumbled that it's mostly Portman's buddies at the White House talking him up. "I think that buzz is largely coming from 1600 Pennsylvania Avenue," the strategist said. "It's like a college radio station -- the further you get from campus, the more it dies down."

What might attract McCain to Portman is easy to see: He's conservative, but not a bomb-thrower on social issues. He's friendly with big business interests supportive of Republicans. His work in Congress and in the administration gives him valuable insight. "Rob understands government to a degree and at a level that most people don't achieve without serving as vice president or president," said Robert Paduchik, Bush's campaign manager in Ohio in 2004. "Having worked on the Hill, having been the president's liaison there, having worked at USTR and OMB -- you really understand the nuts and bolts of how things happen in government with that kind of a résumé."

As an added boost, Portman can claim real experience with economic policy issues, an area of weakness for McCain. But Portman, sticking on message, says the veteran senator doesn't need his help there. "It's really kind of interesting to me that a guy who has been chairman of the Commerce Committee and has been working on these economic issues is viewed somehow to have less experience in dealing with the economy than Senator Obama, who's been in the Senate for a couple years," he said.

That experience, though, comes with a bit of baggage known as George W. Bush. In an election where Democrats are already saying McCain is running for Bush's third term, a loyalist who worked in both Bush White Houses might not be a plus. "Rob Portman isn't just linked to the failed Bush agenda," Ohio Democratic Party spokesman Alex Goepfert said. "He is the failed Bush agenda." Portman pushed to expand free trade agreements, both in Congress and as the top U.S. trade official, including CAFTA, a NAFTA-like pact in Central America that angered unions.

At OMB, the perception when Portman left was that he simply got sick of pushing for budget policies that didn't make sense, said Gary Bass, executive director of OMB Watch, an outside watchdog group that's been critical of Bush's budget work. "Portman generally got relatively high marks for his style," Bass said. "What he did not get high marks for was beefing up morale at OMB, or for the quality of the projections or the work that OMB does." Portman kept up the administration's trick of using five-year budget projections, instead of the usual 10, to minimize the apparent impact of tax cuts. But maybe he thought that was a good idea -- now, he praises McCain for pushing for deeper cuts in the corporate tax rates than Bush ever proposed.

It's unclear whether Portman would be of any real strategic help to McCain in the Buckeye State. Ohio is quite large, with nine different media markets scattered around; being a congressman from Cincinnati doesn't necessarily mean you automatically win the support of soccer moms from Toledo. "He wouldn't help [McCain] in Ohio at all," said one Ohio Republican strategist, who nevertheless said Portman would make "a terrific candidate." "Portman's name ID in Ohio is maybe 12 percent. Maybe."

But other Ohio strategists say they think Portman would help get the GOP organization in the state excited. And maybe his debating skills will really work to his advantage, too. "He was just brilliant" sparring with Cheney the last two times, said Mary Matalin, a GOP strategist who helped Cheney prep for debates with Lieberman and Edwards. "He has a very fun theatrical capacity -- he can get into the character."

If he doesn't get picked, chances are pretty good Portman will wind up working closely with whoever does, appearing once again as the Democratic running mate. He said he's up for the job: "I don't know if they'd want me, but yeah, it'd be fun." Not a bad attitude to have about playing a vice-presidential nominee -- or perhaps being one for real.