John McCain used the high court's decision to blast away at Barack Obama -- but it could make Obama's campaign more bulletproof. 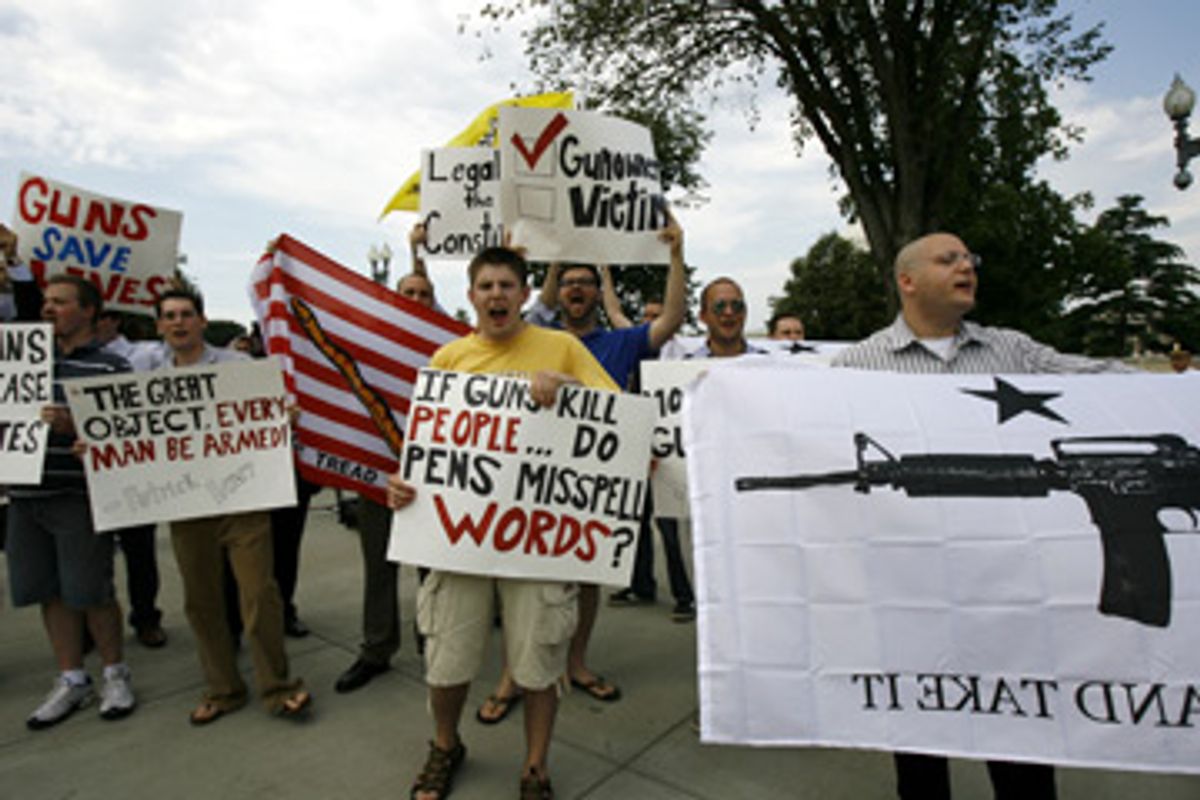 "God, gays and guns" have been pretty good to Republicans over the last few campaigns. The Karl Rove playbook says not to worry if the war in Iraq has been a disaster or the economy is tanking -- just fire away at your opponent's liberal views on a few wedge issues and then waltz your way into Washington.

To listen to John McCain's campaign, Thursday's 5-to-4 landmark Supreme Court ruling overturning a law banning handguns in Washington, D.C., played right into that strategy. "I think it raises the significance of who's elected president on whether or not your Second Amendment rights will be protected as an individual right, given the narrowness of that decision," Kansas conservative Sen. Sam Brownback told reporters on a conference call organized minutes after the decision came out. The Republican National Committee was just as quick to respond, sending out e-mails loaded with Barack Obama's record on guns. The e-mails pointed out Obama's previous support for the D.C. ban, and a 1996 questionnaire in which he had indicated support for a handgun ban in Illinois. And John McCain's personal statement on the ruling brought up -- once again -- Obama's much ballyhooed comments from back in April suggesting that when rural people "get bitter" they "cling" to their guns (as well as their religion). "Unlike the elitist view that believes Americans cling to guns out of bitterness, today's ruling recognizes that gun ownership is a fundamental right -- sacred, just as the right to free speech and assembly," McCain said. It didn't take much reading between the lines to get the message: "America, beware! Obama wants to take your guns!"

In one sense, the Supreme Court's watershed ruling on the incendiary issue of gun control was a stark reminder of what's at stake this November regarding the nation's top court. Given the age and health of several sitting justices, it is likely that the next U.S. president will appoint at least one new member to the now conservative-leaning bench. But rather than setting off a months-long debate and stirring partisans on both sides of the political divide, the court's decision may have shoved the gun control issue further aside -- and helped inoculate Obama from it.

It's already been a few years since Democrats in any concerted way pushed for sweeping gun restrictions as a matter of policy; after Al Gore found gun control hurt him in 2000, candidates learned to sidestep the topic in states or districts where gun control measures were unpopular. And now that Justice Antonin Scalia and company have decided the Second Amendment provides a basic individual, not collective, right to bear arms, Republican and Democratic strategists alike say it may be harder than ever for conservatives to whip voters into a frenzy on gun ownership come November.

"What the National Rifle Association does is try to scare gun owners by telling them Democrats are going to take their guns away," said Doug Hattaway, a Democratic strategist who advised Hillary Clinton this year, and Gore when he ran for the White House. "Well, the Supreme Court has just said nobody's going to take their guns away." (Speaking of Clinton, it was her campaign, not the GOP, that first went after Obama on guns back in April.)

McCain's hail of attacks against Obama notwithstanding, Republicans seemed to agree about the ruling. "I doubt it's going to have much of an effect, because I think that Democrats learned their lesson on this years ago," one GOP consultant said. Moreover, 2008 may just not be the year for distracting political wedge issues. "The mood of the country is so negative, and we have real dominant issues of gas prices, the economy, Iraq, that it's a little bit harder for this particular issue ... to get as much oxygen as it might," said GOP pollster Glen Bolger.

Reacting to the decision, Obama aimed for the center, putting out a statement of his own that said he agreed there was an individual right to own guns, but that "crime-ravaged communities" should be able to pass "common-sense, effective" laws restricting guns. "As president, I will uphold the constitutional rights of law-abiding gun-owners, hunters, and sportsmen," Obama said. "I know that what works in Chicago may not work in Cheyenne." (His response also signaled that he's not likely to use District of Columbia vs. Heller as an example of why he, and not McCain, should be appointing the next Supreme Court justices; many American voters likely agreed with the decision Thursday.)

Even if the GOP wanted to target Obama as an anti-gun crusader, McCain isn't exactly its best poster boy on the subject. The NRA gave him a "C+" lifetime rating four years ago, and he admitted at a debate in November that he doesn't own any guns. The Republican National Committee accused Obama of flip-flopping Thursday, playing up his previous support for D.C.'s gun-ban law and for similar legislation in Illinois. But Obama's position, which steers clear of the radical edges of a debate that can get extreme on both sides, might make sense to swing voters who like to hunt but who are dismayed with gun violence in the nation's schools and urban streets.

And it may even be easier for him to get those voters to listen to him now. "I don't think [Obama] has to wink and nod; I don't think he has to don an L.L Bean cammo outfit and a Ruger 12-gauge shotgun to go shoot a goose," said Steve Jarding, a Democratic strategist who managed Jim Webb's Senate campaign in Virginia two years ago. "But I think he has to show America that he respects [rural hunting] culture and that he's not going to do anything to impede it. He can use this court decision and say, 'Even the courts have determined that [a right to bear arms] exists.'"

The NRA appears to have won a major victory Thursday in the legal war over gun ownership. But it may have lost a weapon in the political war. Indeed, Charlton Heston can rest easy: Thanks to the Supreme Court, no one will ever be able to wrest his guns away from his "cold, dead hands" -- not even a Democratic president.