This new Pixar movie is an environmental cautionary tale and a story of robot love -- and quite possibly the most melancholy cartoon ever made. 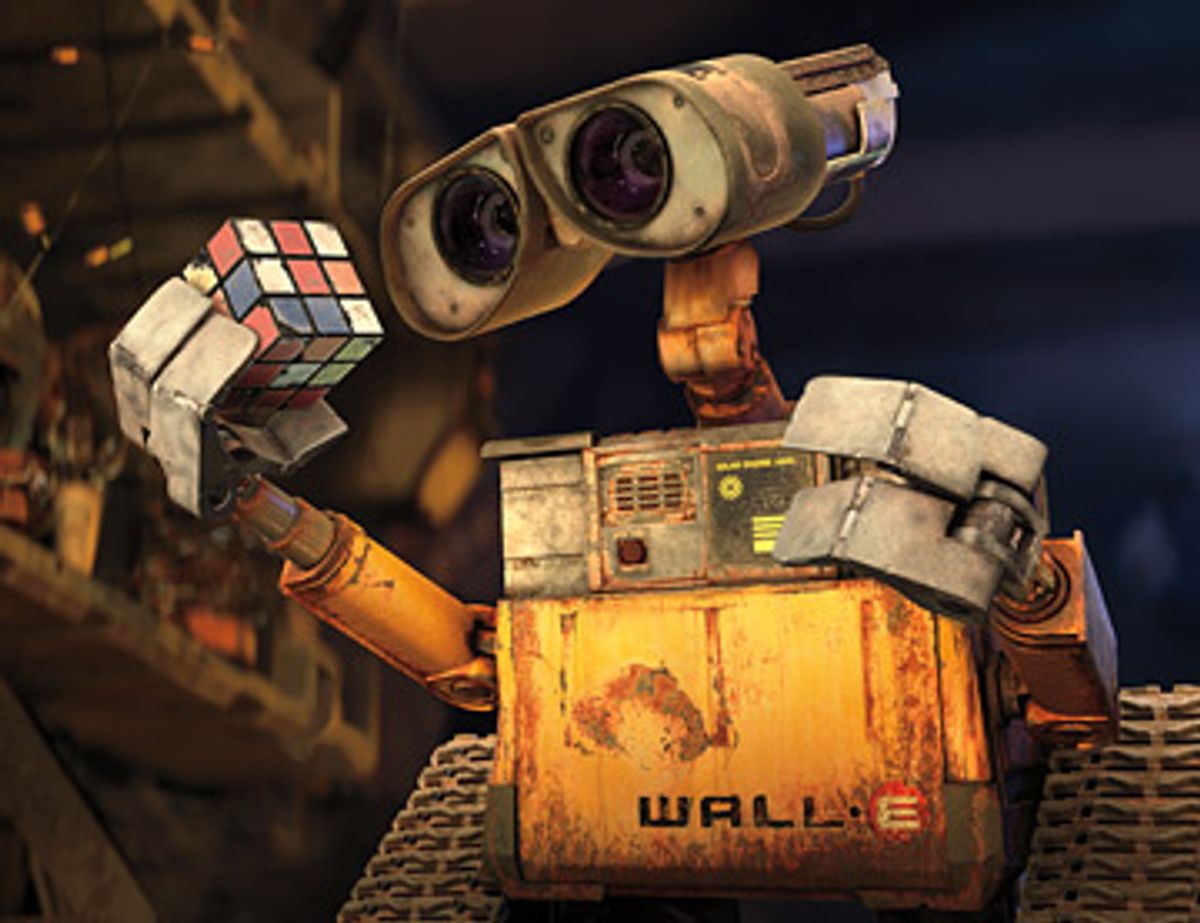 The new Pixar feature "WALL-E" is an environmental cautionary tale, as well as a story of budding love between two robots. And for its first half-hour or so, it's possibly the most melancholy cartoon ever made: Even the color palette of that early section, a mosaic of brownish grays brushed with dusty sunlight, speaks of loneliness, and of desperate cheerfulness in the face of a blank future. In the second half, "WALL-E" becomes less lyrical and more satirical, although even then, its bite is surprisingly sharp. But by the end, "WALL-E" has turned into something else again, a picture that's so adamant about ending on a feel-good note (or at least a feel-OK note) that it betrays the sad, subtle beauty of those early scenes. It must be that director Andrew Stanton -- the man behind the enormously successful "Finding Nemo" -- didn't want to make too much of a downer: Can't be sending all those tots home with the blues, can we? But the picture feels weirdly, and disappointingly, disjointed, something that starts out as poetry and ends as product.

WALL-E is a sort of mobile trash compactor -- his name is an acronym for Waste Allocation Load Lifter Earth-Class -- and he's the last robot left on a desolate, crumbling Earth, 800 years in the future. WALL-E has a squat yellow metal body and sturdy pincers for hands. He doesn't say much (the noises he does eventually make are provided by Ben Burtt). But his eyes, two lenses perched atop a virtually nonexistent head like a set of binoculars, suggest the all-too-human anxiety he suffers: He has the perpetually worried look of the young Woody Allen.

Although there are no humans left to avail themselves of his services (we'll find out where they've gone later), WALL-E still dutifully goes about the business he was built to do, scooping up scraps of trash and metal, forming them into solid, compact cubes, and stacking them high: He's surrounded by faux skyscrapers made of these blocks, reminders, maybe, of the great things men were capable of doing before they were undone by greed and hubris. Or maybe they're just comforting artifacts for this lonely little robot, mementos from a time when he was surrounded by life.

As WALL-E roams this forlorn landscape, doing his job simply because he has no idea what else to do, he picks up small treasures, bits and bobs that he thinks (if robots can think) might one day come in handy, and brings them back to his lair: The mishmash includes a Rubik's cube, strings of Christmas lights. WALL-E has one friend -- an elegant-looking art-deco-style cockroach who communicates mostly by clicking and cocking his antennae -- but we can see he longs for something more. Is it possible he's been so well-programmed by humans that he's more human than human? Stashed in his cave is a talisman that WALL-E values more than anything else in his possession, an object that he goes back to obsessively, hoping to unlock his secrets. It's a scratchy videotape of "Hello, Dolly," although only small portions of the tape appear to be functional. And so WALL-E spends his evenings trying to parse the secrets of human connection through musical numbers like "Put On Your Sunday Clothes" and "It Only Takes a Moment." He's bewitched by these fragments of pop art: For him, they're mysterious primers on what it means to dance, or to hold someone's hand. When the music kicks in, it's shaky and faint like a cue beamed in from a far-away galaxy, a place where people used to understand the pleasure of one another's company, or even just the joy that could be found in a throwaway musical number.

There's very little dialogue in the early part of WALL-E, and that section's near-silence only enhances its aura of mournful obsessiveness: Scraps of pop culture that are expendable to us (who ever even thinks about "Hello, Dolly" anymore?) are precious to WALL-E, and they begin to have even greater potential meaning when a lovely girl robot named Eve -- shaped like a sleek white bullet, she resembles a cocktail shaker from a '70s bachelor pad -- comes to Earth on a mission of her own.

There's more to "WALL-E" than just a love story. There would have to be, because as Pixar has gone about building a reputation for meticulous craftsmanship in animation, its pictures have become more ambitious in their narrative and thematic scope as well. Sometimes the company has gone beyond fulfilling those ambitions, as in the case of Brad Bird's marvelous Pixar features "The Incredibles" and "Ratatouille." Other times its movies have seemed to be about nothing but ambition (as in the flashy but lifeless "Cars").

"WALL-E" falls somewhere between those two poles. It's not as beautifully crafted a piece of work, either visually or narratively, as "Ratatouille" is. But it does have a soul, and for a portion of the movie, at least, Stanton (who co-wrote the script, with Jim Reardon; he and Pete Docter conceived the idea for the story) does take a surprisingly firm stance on the uselessness and unlikability of humankind. "WALL-E" shows us a future world in which humans -- fed largely on junk food -- have become so fat they look like old-fashioned rubber dollies bloated to obscene proportions. They're obese partly because they're lazy: Instead of walking, they've gotten used to coasting along on floating chaise lounges, and robots cater to their every whim. Instead of talking to each other face-to-face, they chat with their friends on computer screens that appear to be permanently affixed just a few inches from their faces -- even when their friends are sailing along right next to them.

"WALL-E" also takes on corporate greed and political corruption: The president of the multinational megacorporation that's largely responsible for the demise of humankind is also the president of the whole world, and he's played by Fred Willard, who appears as a hologram spreading false optimism and lies. But "WALL-E" ultimately backs away from both its romanticism and its bitterness; its ending feels like a tacked-on remnant of manufactured hope and goodwill. There's plenty of antic action in the middle of "WALL-E," including a chase sequence involving a bunch of "rogue robots." But the action doesn't feel integral to the plot -- it's more like a forced effort to make sure the kiddies don't get bored.

Toward the end of "WALL-E," Stanton tries to circle back and recapture some of the wistful magic of the movie's early scenes, but the spell doesn't take. "WALL-E" gives us a hero who, by culling through the masses of junk that we so casually throw away, becomes a repository for human memories, a living (though not breathing) creature who has more feeling than actual humans do. Then it shows us actual humans -- lazy, fat, brainless ones who have squandered and abused their free will -- and asks us to forgive their foibles. The gloss of preachiness that washes over "WALL-E" overwhelms the haunting, delicate spirit of its first 30 minutes. This clearly isn't a movie made by a robot; the drag is that it ends up feeling so programmed.