Obama and Clinton's choreographed love fest in Unity, N.H., went off without a glitch. But are Democrats singing the same tune? 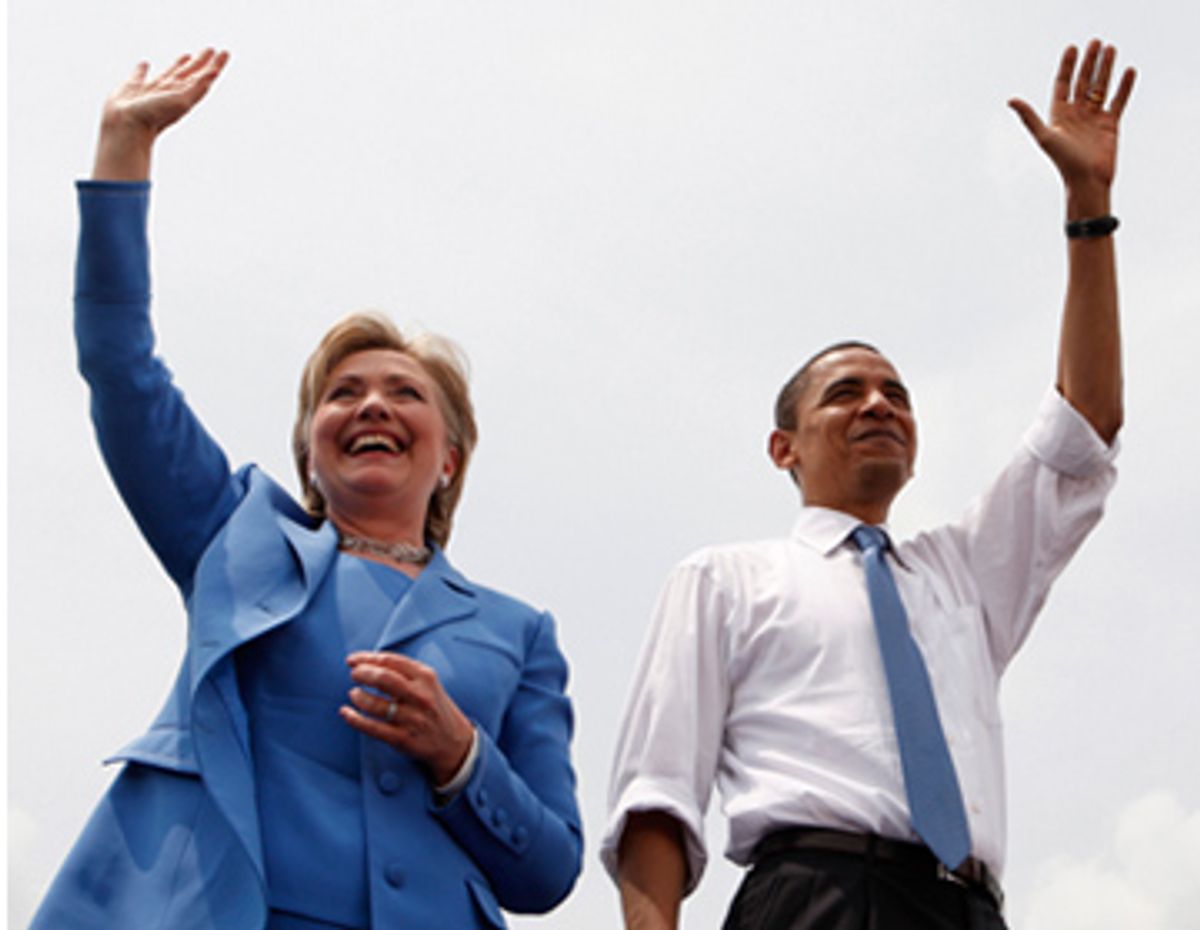 The transfer of power from the Bill and Hillary past to the Barack Obama future was handled as well as these rituals ever are in politics. New Hampshire, as it almost always does during the presidential season, provided the prime scenic backdrop at an outdoor rally Friday afternoon here in -- that's right -- Unity. Hillary Clinton, who certainly proved during the gantlet of primaries that she is a campaigner who can play a part to perfection, excelled at being the gracious loser, stressing that the opportunity for the Democrats in 2008 means, "We cannot let this moment slip away."

Obama, who unquestionably had the easier public role, gently praised Clinton ("I know firsthand how good she is, how tough she is, how passionate she is") -- and even followed her invitation to express disbelief that she could possibly be old enough to have spent four decades in the political arena. While the vice presidency was never alluded to, Clinton (who after all had eight years of experience as first lady) showed that she can do deference. As Obama spoke, she disdained the chair to his right and instead stood gazing up at him with what seemed at a distance to be an admiring expression.

But the moment truly fraught with symbolism came early Friday morning when Obama and Clinton came onto his campaign plane, after arriving at Washington's Reagan National Airport in separate Secret Service motorcades. As they walked down the aisle (no metaphors intended here) Obama put a light hand on Clinton's back guiding her toward a row of seats on the left front of the plane. The message in that small gesture said it all -- "You're my guest and you're on my plane."

During the flight to New Hampshire, Obama and Clinton talked animatedly as they sat together with the would-be Democratic nominee at the window and his principal rival on the aisle. At least, they seemed to be talking animatedly judging from Clinton's repeated head bobbing and less frequent conversational movement from Obama. Peace was at hand in the Democratic kingdom. Roaming the aisle, David Axelrod, Obama's chief strategist, radiated a look of relaxed satisfaction. Asked if the unity day fitted his fantasies from the more anxious moments during the early primaries, Axelrod said, "It's perfect. Blue skies. Color coordinated." That was a reference to their respective outfits, seemingly chosen by coincidence. Clinton wore a sky blue pantsuit and Obama, with his jacket off on the plane, was wearing a white shirt and a tie almost the exact hue of Clinton's outfit.

Since the primaries ended with a whimper three weeks ago, both Hillary Clinton and Obama have recognized that self-interest demands that they avoid any moments of pique. (Bill Clinton's self-indulgent capacity to sulk should not be underestimated, but then the former president may limit his appearances for Obama to places like the Bittercreek Ale House in Boise, Idaho.) For the New York senator, the Democratic Party is now in Obama's hands and she has seemingly made her peace with that reality. Obama, in addition to auditioning vice presidents, needs two things from Clinton -- an end to the story line about Democratic disunity (note that pesky New Hampshire dateline) and assistance in winning over the hardcore Hillaryites who appear to have puzzled the Obama campaign with their reluctance to rally around the de facto nominee.

As Clinton spoke from behind a lectern with a "United for Change" sign and pledged her fealty to Obama, Axelrod stood behind the press stands, talking individually with reporters, most of whom had the same question: What can Obama do to close the deal with unreconciled Clinton voters? "We've just been through the most protracted and competitive presidential primary race in history," he said. "And people feel very passionate about it. We're all being sensitive to people having to sort through it all before they get onto the next battle."

When Obama campaign manager David Plouffe briefed reporters in Washington Wednesday, he came equipped with a chart showing that Obama leads McCain among women by a double-digit margin in five separate national polls conducted in June. John Kerry, in contrast, only defeated George W. Bush by a 51-48 percent margin among women in the 2004 exit polls. Alluding to these numbers, Axelrod said Friday, "I think the momentum of women to Obama in the polls indicates that there's a chasm between Obama and McCain on the issues in this campaign."

Even if the vice presidency is not in her future, Clinton has signaled that she will do anything that Obama asks in the weeks ahead -- and the Obama campaign seems more than willing to deploy her on the party harmony hunt. It is a reflection of the money-mad nature of modern politics that the best way to end a political feud is by writing a personal check. When Obama met with the leading Clinton fundraisers in Washington Thursday night, he and Michelle each gave $2,300 contributions (the maximum the law permits) to Hillary's primary campaign as a gesture toward paying down her campaign debt. A Clinton aide spread the word Friday that, for their part, both Hillary and Bill Clinton had sent Obama $2,300 for his general-election campaign. It was a classic case of money talks and nobody squawks.

Introducing the Barack and Hillary show Friday, the suspender-wearing Ken Hall -- the unofficial mayor of tiny Unity -- bragged that, "People here have been sprucing up a bit." In fact, he proudly noted, "I bought a new pair of sneaks." In a sense, both Barack Obama and Hillary Clinton spent Friday sprucing up the Democratic Party after the storms of winter and spring. It was a prelude to the one-big-happy-family motif of the Denver convention. The only question is whether Hillary Clinton will be in the background onstage cheering or standing next to Obama as he raises her hand as his vice presidential running mate.