Could be Biden time

He's got experience, foreign relations chops, and a moving personal story. Is Joe Biden near the top of Barack Obama's veep list? 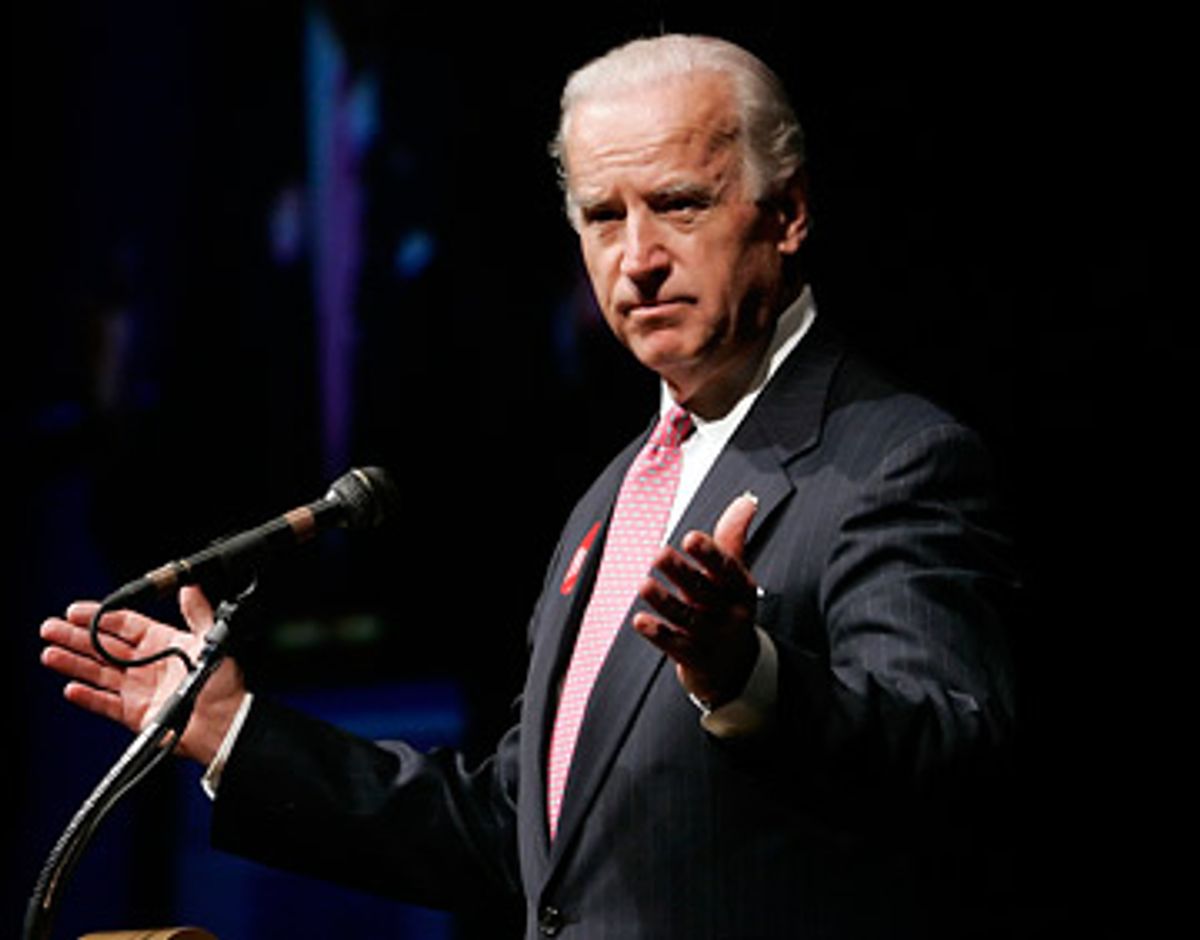 Fizzling in the Iowa caucuses with 1 percent support is an unusual way to achieve liftoff on the national ticket. But six months after Joe Biden ended his long-shot presidential campaign, the chairman of the Senate Foreign Relations Committee appears to be in serious competition to be Barack Obama's running mate, or secretary of state, should the Democrats win in November. While vice-presidential speculation should come with a surgeon general's warning, the 65-year-old Biden has made a stirring recovery for a politician who flat-lined in the Hawkeye State.

"He's such a competitive guy, I wondered how he would react to losing the nomination," said longtime Biden political advisor Ted Kaufman. "But there was no mourning period with him. Some of it, of course, was that he got hit by a tractor trailer in Iowa, so there was no reason to second-guess anything." The senator's sister, Valerie Biden Owens, who is managing (as always) his risk-free Senate reelection campaign in Delaware, stressed, "He's settled in. He's comfortable with himself. He's got a family. It didn't work, so he went back to chairing Foreign Relations."

Biden, following the long-established low-profile protocols of the vice-presidential game, declined to be interviewed for this article and said, through his press secretary, that he stands by his recent V.P. answer on "Meet the Press." Asked the obvious question by Brian Williams, Biden gave all the usual demurrals before adding, "If the presidential nominee thought that I could help him win, I'm [not] going to say to the first African-American candidate about to make history in the world, no, I will not help you ... Of course I'll say yes."

Obama must answer two questions to woo wavering voters during the run-up to the Democratic Convention. The easy one -- "Who are you?" -- undergirds everything from biographical TV ads to the acceptance speech fireworks in Denver. The trickier question for Obama as a new-generation Democrat is, "How will you govern?" That cannot be answered with gauzy media imagery and inspirational rhetoric. The tenor of an Obama administration will be suggested, more than anything, by his vice-presidential choice.

That may be why the Obama campaign signals that narrow geographical calculations may not play a role in the hunt for a vice president. Briefing reporters in Washington last week, campaign manager David Plouffe dismissed the notion that a running mate should be expected to deliver his or her home state. Plouffe cited the choices of Al Gore in 1992 (Bill Clinton would have won Tennessee anyway) and Dick Cheney in 2000 (Wyoming was never in doubt for the GOP) as shrewd political choices that brought heft to the ticket. Plouffe predicted that Obama would choose someone who is "qualified to be president and who will be a partner in governing."

The description certainly fits Biden, one of the leading foreign-policy figures in the Democratic Party. For a would-be president like Obama, who would enter the Oval Office facing the challenge of prudently withdrawing from Iraq, Biden's long-standing proposal to acknowledge reality and divide the country into semi-autonomous Sunni, Shiite and Kurdish regions may have appeal. (Salon conducted a lengthy foreign-policy interview with Biden before the Iowa caucuses.) Granted, Biden, who never served in the military (he failed his draft physical during the Vietnam War), cannot play the macho-man war-hero card like Virginia Sen. Jim Webb. But his son Beau Biden, the attorney general of Delaware, will be deploying to Iraq this fall with his national guard unit.

Despite the dismal results in Iowa, Biden was a spirited campaigner and an adroit, if sometimes loquacious, debater. Asked in an early 2007 debate whether he would have the discipline as president to control his motor-mouth, Biden gave a one-word answer, "yes," and then stood there grinning as his subsequent silence prompted laughter.

"In choosing a vice president, you want somebody who can be on the campaign trail day after day, taking the pressure off the candidate," said David Wilhelm, a former Democratic national chairman, who backed Biden in the primaries and is now an Obama advisor. "You want somebody who can drive the message of the day and can win the vice-presidential debate. One of the things that this campaign showed is that Joe Biden is a good retail politician."

During the primaries, Obama had a difficult time winning over white Catholic voters, garnering only 34 percent support from this group in Ohio and only 28 percent in Pennsylvania, according to exit polls. Biden is not the only Catholic frequently mentioned as a veep possibility; Kansas Gov. Kathleen Sebelius is another. But Biden comes equipped with a just-plain-Joe political style and a heart-rending personal history -- his wife and infant daughter died in a car crash just a month after he was elected to the Senate in 1972. As a senator, Biden took the train to Wilmington virtually every night to be with his two surviving sons.

An Obama-Biden pairing might seem odd to those who remember that Biden began his campaign with an ill-expressed interview in which he called Obama "clean" and "articulate." Not only did Biden apologize for his word choice, but Obama also publicly forgave him during a December debate in Des Moines. "I have absolutely no doubt about what is in his heart and the commitment that he has made to racial equality in this country," Obama said. "So I will provide some testimony, as they say in church."

The vice-presidential name game can be frustrating for those under consideration who can do little but wait by the phone. The passivity that comes with the second-banana bake-off can be galling. "This process will not make Joe crazy," said pollster John Marttila, whose ties with the senator go back two decades. "He already has a life that he loves."

Biden, who also entered the 1988 presidential race but later dropped out, is probably reconciled to the reality that he will never be president, despite the years of dreaming. But it would be a strange twist if Biden found himself nominated for the second highest office in the land just at the moment when the long-raging fires of personal ambition had died out.