A car small enough to alter your relationship with the city. 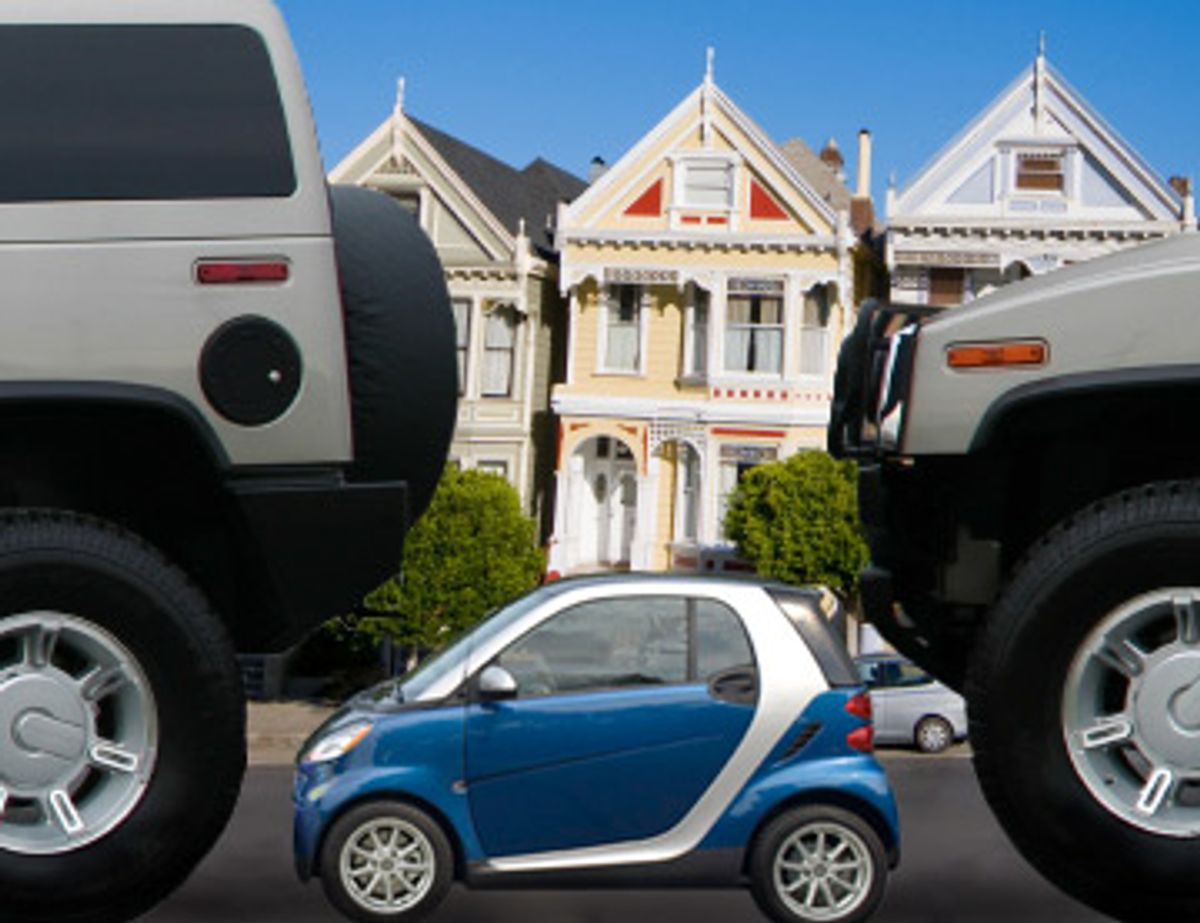 Let's start with the bad: The Smart Fortwo, the strikingly diminutive two-seat alterna-car you've likely seen zipping through your neighborhood in the past few weeks, is underpowered. Its three-cylinder engine seems to regard the act of your foot slamming on the gas not as a command but a gentle request, one to be pondered for a lazy second before any action is necessary. If you have to take off quickly to escape an oncoming behemoth -- a Honda Civic, say -- you'd be better off ejecting and making a run for it.

The Smart's automatic transmission, too, is simply awful, shifting from first to second as haltingly as a band geek on a blind date with a cheerleader. The brakes are squishy, sinking deep into the floor before they engage. And the tiny ride's suspension leaves something to be desired -- namely, a bit of protection for your throbbing, pothole-crushed behind.

But traverse the city for just 10 or 20 minutes in the Smart and the truth will hit you like a Hummer on its way to the repo lot. While just large enough to realize, on the inside, the comforts of a sedan, the Smart is perhaps the first modern, street-legal car small enough to completely upend your relationship with the city.

You feel it as you squeeze into that first too-tight parking space, a twinge of pride and schadenfreude that tickles your gut while passersby watch in wonder and amazement. And there it is again as you merge easily into an exit lane packed with unyielding commuters, or pull circles on a street so narrow another car would have to settle for a 13-point turn -- it's the sense that you're unstoppable in this thing, that no corner of the city is off-limits, that this is the future of driving.

True, the fruits of the Smart revolution are circumscribed in time and space: The car will alter life most thoroughly for those of us who inhabit densely populated urban areas, places where parking, not gas, remains the most precious automotive commodity. And though it's inarguable that the Smart's era has arrived, the clock is ticking -- within a few years, we'll likely have smarter Smarts, or other companies' improved takes on the concept, and this vehicle will look like the first iPod, a good idea superseded by better implementations.

But if you choose to plunge into the Smart now, you won't be sorry. You should know, though, that traveling in this car is a strangely exhibitionistic affair; during the week that I drove it around San Francisco, no fewer than a dozen people interrogated me at gas stations, in parking lots and even while I stopped at red lights. The Smart elicits such curiosity that owners have taken to printing up FAQs to hand out to people they meet.

One of the main questions you'll field is, Does it feel like a normal car? Inside, it certainly does -- at least, it feels like the front half of a normal car. Though its interior design is a bit too ostentatiously youth-targeted -- mine sported 1970s-era orange cloth seats -- there's more than enough legroom, headroom and elbowroom for two large people (or one person and a child's car seat; it's the ideal car for the single parent 1).

Once you sit down, you quickly forget you're in something that looks goofy. The Smart sits high, so you feel taller than others on the road, but unless you peek behind you -- where there's space for three or four grocery bags or two carry-on suitcases, but not much more -- you'll feel as if you're riding in any standard, lower-mid-range sedan. There's a lot of hard plastic, but the instrumentation is nicely designed, and nothing looks cheap. It even has some nice bonus features: A large moon roof offers a clear shot of the night sky; you can enjoy the view while listening to your iPod, which connects to the car's stereo through a built-in audio jack.

People also want to know, Can it go on the freeway? When you tell them that it can -- that it has no trouble going up to 70 -- they interject, but is it safe? This is a tougher question. The Smart, which has passed all U.S. safety tests, includes four air bags -- two in the front, two on the side -- as well as force-limiting seat belts, antilock brakes and electronic stability control, a lifesaving feature not usually found on very small cars. On the other hand, you're a small, inconsequential speck, a golf cart riding among Escalades, and as you take to the highway, you feel your vulnerability powerfully. Perhaps in time one might get used to this sensation; for me, it smacked too much of high school.

Does it run on gas, people want to know? What's the mileage on that thing? Yes, the motor's all gas, but the Smart is far less efficient than its size would suggest. It's rated at 33 MPG in the city and 41 on the highway, which is better than almost any other car manufactured today, but not nearly as great as the hybrid Toyota Prius (48 city, 44 highway).

I drove almost exclusively in the city, and when I paid attention to my habits -- accelerated slowly, coasted to a stop, slipped into neutral going downhill (not the safest thing to do) and so on -- I managed to eke out 33 miles per gallon. The Smart has a faux-manual-transmission mode that lets you shift gears with two paddles that are set behind the steering wheel; when I used this function, I got marginally better mileage. Less careful driving yielded MPGs as low as 28. I calculated these numbers manually, by the way. Unlike the Prius, the Smart lacks an MPG gauge to let you know how much gas you're using at any moment. Considering the potential audience for this car -- Al Gore fans -- this is a crucial omission.

The Smart, of course, will set you back much less than the Prius. The manufacturer's base price is $12,000, though the model I tried -- with the moon roof, power steering, premium sound and a few other knickknacks -- was priced at nearly $16,000, excluding tax, licensing and other fees. To be sure, that's not cheap: You can probably pick up a Honda Fit or Toyota Yaris, which are both easy on gas and drive wonderfully, for less than you'll pay for the Smart. (The Prius starts at $21,000, but you'll be lucky to get one from a dealer for less than $25,000.)

But the Fit and the Yaris are both at least 3 feet longer than the Smart (which is just under 9 feet long) -- and size matters. San Francisco is one of the toughest parking cities in the country, and I drove the Smart to some of the city's most nightmarish neighborhoods, places where I could never venture in my own car, a compact VW Jetta: Russian Hill and North Beach on a Saturday night, the Mission after work on a weekday, the Marina shopping district on a Sunday afternoon.

In every place, at any time of day, I found a spot, usually several, often within five minutes. The spaces were certainly odd -- little scraps of pavement between garages, in otherwise unparkable corners jammed up against hydrants -- but they were all legal. And I had one of the only cars in the city that could fit in these out-of-the-way areas. At times it felt like cheating -- like I was the mayor or a diplomat or I had a secret key to every neighborhood, like a metropolitan god had blessed my weary soul. Seriously, it was heady.

So, sure, the Smart car feels underpowered compared with a John Deere, so its gas efficiency isn't as great as you'd imagine, so it won't come in handy if you decide to go on an Ikea shopping spree -- so what?

Driving, these days, is an endeavor fraught with guilt and hassle, every turn of the key a vote in favor of global warming or Osama or suburban sprawl. The Smart returns pragmatism to the road: It's not fancy, and as a driving machine, it's not fun, but who said transportation should be?

Counting the time you save while parking, in the Smart, you'll often get from place to place faster than you would in a Porsche. What more could you ask for from a set of wheels?

1 Readers have pointed out that it isn't safe to place a child seat in the front passenger seat -- a fast-deploying airbag can seriously injure your child. This is good advice for most cars. Fortunately the Smart detects whether there's an adult or a child sitting in the passenger seat. When the weight falls below a threshold, the airbag turns off (there's an indicator light which tells you it's off, too). Back to top.