Losing the mullet, angling for veep

Minnesota Gov. Tim Pawlenty has a shot at being John McCain's No. 2 -- and it's not just because of the snazzy new haircut. 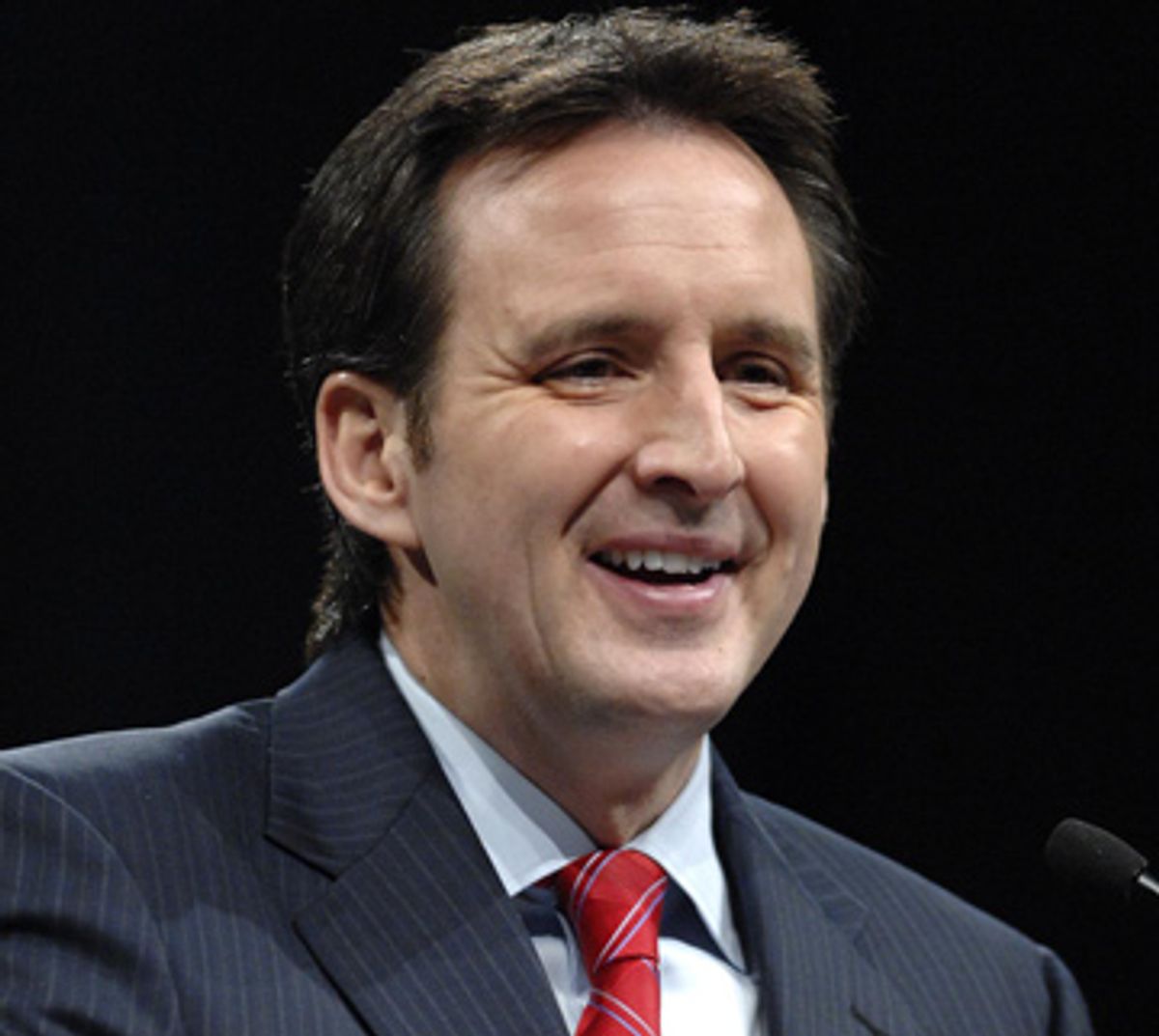 Minnesota Gov. Tim Pawlenty has been active in Republican circles for years -- as chairman of the National Governors Association, as the head of the Bush-Cheney reelection campaign in Minnesota in 2004, as a vocal supporter of John McCain's campaign this time around. It didn't take long for people to start wondering if he was angling for a spot on McCain's ticket, and rumors spread that he was a top contender for the GOP's vice-presidential nomination.

But the real sign Pawlenty might be interested in being McCain's running mate came in a slightly subtler form late this spring: He cut his hair. Gone was the mullet he'd worn for years, even though Minnesota media outlets and political blogs mocked him for it. As Pawlenty hit the Sunday talk shows in May and June, he sported a trim new look. You might even call it vice-presidential.

What has Republicans buzzing about Pawlenty, though, isn't so much his hairstyle as his political style. He's won election twice in a key battleground state that the GOP has long dreamed of taking back at the presidential level, and that will host the Republican convention in September. He's young enough to balance out McCain's age, but experienced enough after two terms in office to claim he's been tested. Social conservatives like him; his pastor, the Rev. Leith Anderson, heads the National Association of Evangelicals. And week in and week out, as one of the McCain campaign's most visible surrogates on cable news, Pawlenty is proving he has no trouble delivering sharp lines against Barack Obama with a smile. (Like other potential McCain running mates, Pawlenty has issued bland denials that he's seeking the job, always leaving plenty of wiggle room in case he's asked.)

"I think Barack Obama's book 'The Audacity of Hope' perhaps should be retitled 'The Audacity of Hypocrisy,'" Pawlenty said Sunday on ABC's "This Week With George Stephanopoulos." He followed up later with a dig at Obama and Hillary Clinton's joint event in New Hampshire: "They shouldn't have had the meeting in Unity, N.H.; they should have had it in Political Expediency, N.H., if there is such a community." The attacks look harsh written out, but they flowed by smoothly in Pawlenty's laid-back Minnesota tone. On TV, he comes across as easygoing and natural, even when he's sticking the dagger in an opponent. Even Democrats in Minnesota credit him for being personable and friendly (though they say that doesn't make him any easier to work with in the statehouse).

Pawlenty's blue-collar roots also look attractive to many Republican strategists. His father drove a truck in the Twin Cities for years. Pawlenty was the first person in his family to go to college. He says he's a "Sam's Club Republican," not a country club Republican, although he has hewed toward conservative economic policies since he was first elected in 2002.

"He's been a conservative governor in a fairly liberal state, and managed to maintain his popularity pretty well doing it," said former Minnesota Rep. Vin Weber, now a D.C. power broker who's staying neutral in the vice-presidential sweepstakes because he's also close with Rob Portman, another contender, and backed yet another, Mitt Romney, in the GOP primary. Weber said Pawlenty has a "Reaganesque appeal" to Republicans who know him.

But on closer examination, some of Pawlenty's strengths may be overblown. His reputation in Washington is as a pragmatic -- he's picked some high-profile issues to break from Republican orthodoxy on, like global warming and prescription drug importation from Canada. But he's clashed frequently with Democrats in the state Legislature, and critics say some of his splashiest ideas have fizzled out because he's been unable to push them into reality.

"When I negotiate with him, I can always calculate what he will do based on what's in his own political interest," said the state Senate president, Larry Pogemiller, a member of the Democratic-Farmer-Labor Party, as Minnesota's Democrats are known, and one of Pawlenty's most dogged adversaries. "If his political interest aligns with where you got to get [on legislation], it's easy to do. If his political interest does not align, it gets a little rougher."

Sometimes Pawlenty's political instincts have caused him public policy problems. Days after Minnesota's I-35 bridge collapse last summer, for instance, Pawlenty said he'd push the Legislature to increase gas taxes to pay for needed repairs to other bridges. Once economic conservatives objected, Pawlenty changed his mind. This year, he vetoed legislation to increase the tax anyway, but the Legislature overrode his veto for the first time in his six years in office.

Moreover, if McCain is hoping that selecting Pawlenty as his running mate would help shift Minnesota's 10 electoral votes his way, that may be a stretch. Since he took office, Republicans lost their majority in the state House, and the DFL picked up a veto-proof majority in the Senate. "He's not been a political magician with the public," said Steven Schier, a political science professor at Carleton College, in Northfield, Minn. "He's won narrowly twice, but his party has in fact marched backward." Recent polls in Minnesota show Obama way ahead of McCain anyway, and the state may not be much of a priority for the GOP by November.

Still, the bench McCain has to pick from isn't tremendously deep this year. Pawlenty has a pretty good mix of the characteristics McCain might be looking for. "He's a young guy, he's reasonably hardcore, the social conservatives like him fine, and the fiscal conservatives like him fine," says Republican activist Grover Norquist. "I think he'd always be in your top five as [likely picks], and depending on what side of the bed McCain got out of on the day he decided, he could get it."