Why "The Bachelorette" hears wedding bells while "The Bachelor" vows to honor and obey his libido alone. Plus: Why "Shear Genius" is anything but. 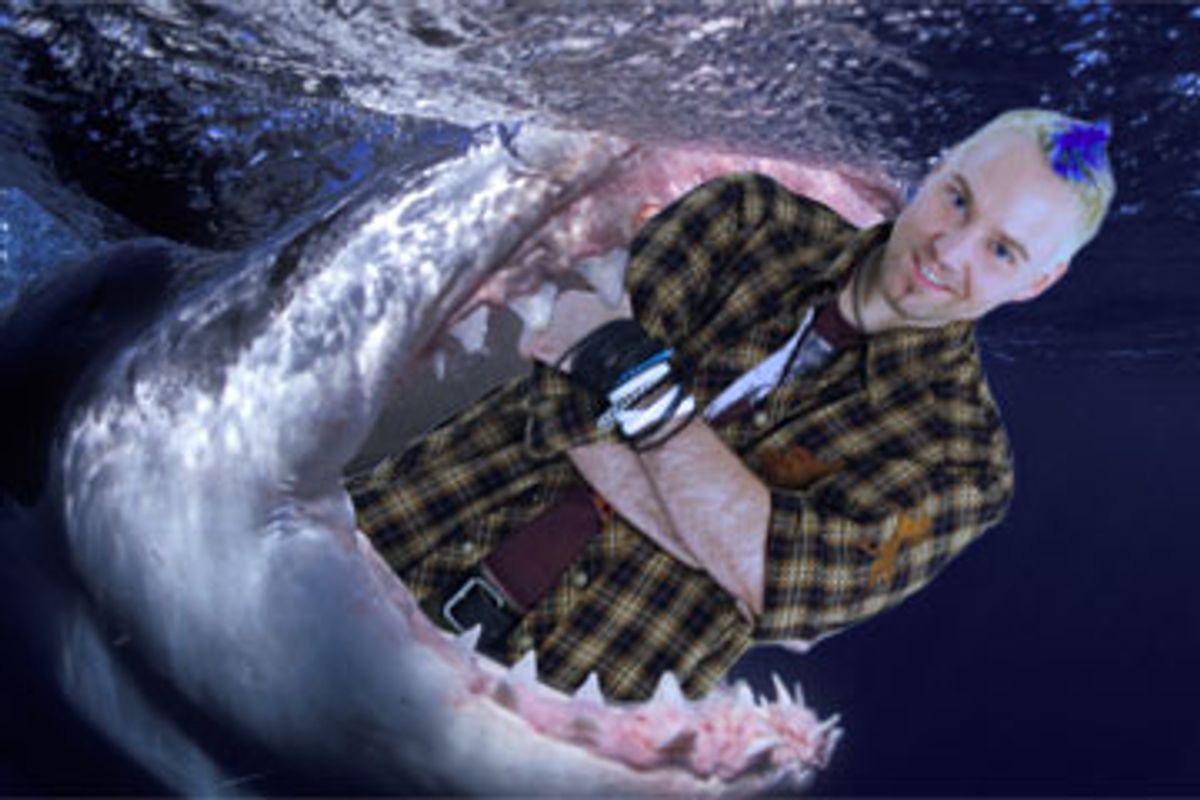 Happy Birthday, America! I guess you're probably feeling your age this year, huh? Well, it's true, you're not nearly as young or as cool as you used to be before they paved over your amber waves of grain to put up five-bedroom, eight-bathroom McMansions. Your gas and food prices skyrocket while the value of your homes spirals downward. Meanwhile, your citizens refuse to distract themselves with idiotic new dances and high-grade cocaine like they did back in the '70s.

Have you lost your mojo once and for all, buddy? I thought the Iraq war was supposed to make you feel sexy again. It worked at first -- all of those big, pretty explosions over Baghdad were like Jägermeister for the red-blooded American soul. So how did all that fun devolve into dusty, lukewarm kabobs and homemade explosives?

But let's not think about that now, America. Let's try to be positive. It's your birthday, after all! Put out your cigarette and come inside. The cake is ready, and everyone's waiting to sing Happy Birthday. Of course they'll snipe about how tired and fat you looked as they're driving home. But for just a second, put on a big, fake smile and suspend your disbelief, OK?

After all, what could be more American than that?

Snatchlorette!
I'll tell you what's more American than that: "The Bachelorette" finale (8 p.m. Monday, July 7, on ABC), a television event that features more big, fake smiles and suspension of disbelief than any other.

And that's good, because we Americans need something sickly sweet and insipid to take our minds off our personal budget crises and burgeoning credit card debts. We need to see a pretty young woman (DeAnna, the Bachelorette herself!) filled with hope -- that naive flavor of hope we had a long, long time ago, before our mortgages went upside-down and our minds and bodies were annihilated by a steady intake of Two Buck Chuck and Awesome Blossoms.

Even though the whole thing is an elaborate farce, like when Princess Diana put on several miles of white silk taffeta and paraded into St. Paul's Cathedral, blinking her long lashes and flashing her already-trademarked Shy Smile like she meant it, like she actually wanted to marry that pudwhacker, we're still ready to gasp and smile along with the latest promotional sweetheart. After all, Diana glowed like a bride for us, not for herself, since she knew she was likely to spend her married life pacing through the lonely halls of Buckingham Palace hating on the queen, wondering where her dumb nerd husband disappeared to with Camilla, and daydreaming about chocolate eclairs. She glowed for us, and we repaid her with that unnatural, obsessive fandom that eventually disintegrates into unvarnished scorn.

Luckily, since this is "The Bachelorette" and not "The Bachelor," it will actually end with a big, splashy, ill-considered wedding. Why? Because men who have to fight over a woman end up pretty certain that they're madly in love with that woman. And if, in the heat of the chase, at that peak moment of vulnerability, they're asked to get down on one knee with a big diamond ring and propose, they'll happily do so (particularly when the diamond ring is free!), even when they've been warned several times that they might be rejected by their dream girl as all of America looks on.

OK, maybe no one is warning them about that. Maybe they're just reminding us, the viewers at home, about it, as they show us teaser shots of both Jesse and Jason bending down on one knee, ring in hand. Suckers. (I think one of them actually has the ring box open, with the ring clearly displayed, as he's kneeling down. Did DeBeers make him do that?) This is the modern version of the circus freak show: "Which of these men will get his heart smashed to bits before your very eyes?"

Please note, though, that while men who fight for a woman end up demeaning themselves thusly, men who are fought over by a bunch of women end up pretty certain that they should go out there and get laid as much as humanly possible, since chicks seem to dig them so much. This is why "The Bachelor" ends not with a diamond ring, but with a flinchy hug and a pledge to "get to know each other better," the sort of halfhearted exchange that results in a three-month relationship at best, during which the Bachelor pines for all of the hot sluts who approach him in bars and restaurants and beg to service him sexually, preferably in the nearest available restroom stall.

So whether DeAnna spends the balance of her days with "Breck," bored out of her skull (since, not surprisingly, Jesse's best bud of a town turns out to have the sparkling personality of a slightly drunk ski bum after a day of shredding), or spends the balance of her days bickering with Jason's ex-wife about how to raise their 2-year-old (who, not surprisingly, says less cute stuff and throws himself facedown onto the floor far more often when the cameras aren't rolling), it hardly matters. Either way, DeAnna will be trapped, just as trapped as the rest of us!

Watching ugly people get ugly haircuts from other ugly people. Yes, folks, "Shear Genius" (10 p.m. Wednesdays on Bravo) is back, and apparently producers have run out of both a) talented, attractive hair stylists and b) attractive humans who want an untalented hair stylist to give them a hairstyle inspired by Wilma of "The Flintstones."

Now, don't start with me about how unattractive people are people, too. This is a show about attractiveness, OK? It's about making attractive people even more attractive. We're meant to focus on looks and looks alone during this hour-long festival of hair-styling artistry.

But the fug factor isn't the only issue here. The cast of hair stylists ranges from mildly annoying to truly unlikable, and each seems to possess the raw skills of your average sullen teenage Supercuts employee. If you doubt me, just look at their hair. Honestly, would you want this guy taking a pair of scissors to your precious locks? I don't think so.

Then there's the hairstyling coach, René Fris, who we're told is well-respected in his field, but who has referred to himself in an interview as a "Danish pastry." But can you blame him? He looks and sounds like a gay Danish version of the superhero guy on the cartoon "Drawn Together":

"Go sheck eht!" (That's Danish Pastry parlance for "Go make those ugly people over there even uglier with some seriously ugly hairstyles!")

Then there's co-host/judge Kim Vo, the dippy blond version of the Danish Pastry, who seems to have a huge smile plastered across his superhero face at all times, even when he's remarking on the poor haircutting skills of one of his charges. But don't let that smile fool you; Vo takes his work very seriously. According to his bio, Vo's "technique is that of a painter" and he "has dedicated himself to painting the perfect color on every head he works on." Sweet Jesus, this man is a public servant of the highest order!

Now watch as the Pastry and the Public Servant grin-cringe (gringe?) their way through the worst hairstyling challenges imaginable, at once unbearably difficult, arbitrary and uninteresting. Give this sad-looking woman with terrible hair a haircut while blindfolded. Why, exactly? Make this woman's hair look like Marge Simpson's. Um, is she going to a costume party?

And then, when the numbskull stylists follow these instructions to a T, with one contestant shaping his poor "client's" hair into an enormous penis and then covering it in a web of fake blue hair so that, yes, she looks exactly like Marge Simpson, what happens? The judges say, "Good job!" and put him in the top three.

Which we viewers at home might have a problem with, if any of the other stylists seemed remotely talented or inspired. Aside from maybe Dee and Nicole, they seem like people who were selected for their willingness to complain on demand for the camera.

Instead of sending stylists Paulo or Gail home for not only not cutting their clients' hair (Yes, yes, "Housewife" Kimberly forbade Gail from cutting it. Didn't the producers foresee a little problem there?), they sent Parker packing for giving Tammy one of the most dramatic and healthy-looking haircuts of all. Oh, but the color was too dark for her age, according to the judges (who are not unlike painters, I should add). The cut was too dramatic. What the hell were these cyborgs talking about? Tammy has a great face, and the cut and color put her best features front and center. Not only that, but she looked so dramatically different from the frazzled blondes in the room, Parker should've won an honorable mention just for sticking to his guns and doing something bold.

But apparently, big-deal stylists have all kinds of notions about rookie mistakes and bad choices and the artistry of being highly paid head-painters that have nothing whatsoever to do with how the style actually looks. It's just: "Oh, he made the color too dark -- you never give an older woman's hair such a dark color!" Right, because all older women want the same triple-processed highlights and lowlights so they can look exactly the same and prove to each other that they're all overpaying for their hair color when they gather at overpriced restaurants and watering holes.

See how we mark members of the same caste? That's how it works in the good old U.S. of A.! We charge all of those cultural markers on our credit cards or finance it with home equity, and then our overlords raise the rates or freeze our credit lines and we're doomed to spend the rest of our days trying to pay them back, smiling fakely and suspending our disbelief in the American dream all the way. We're caught up in the chase, and the chase makes us think that whatever vision of happiness and security we're chasing is worth it.

Happy Birthday, America! You're fat and tired and ugly and uncool and we promise to love, honor and obey you 'til death do us part!

Abc I Like To Watch Reality Tv Television The Bachelor