A-Rod vs. the dueling Sherlock clones!

A new frontier in Other Woman liberation, except not. Whose next-gen Sherlock Holmes will be lamer? Plus: "Wackness" and "Tell No One" wow holiday throngs. 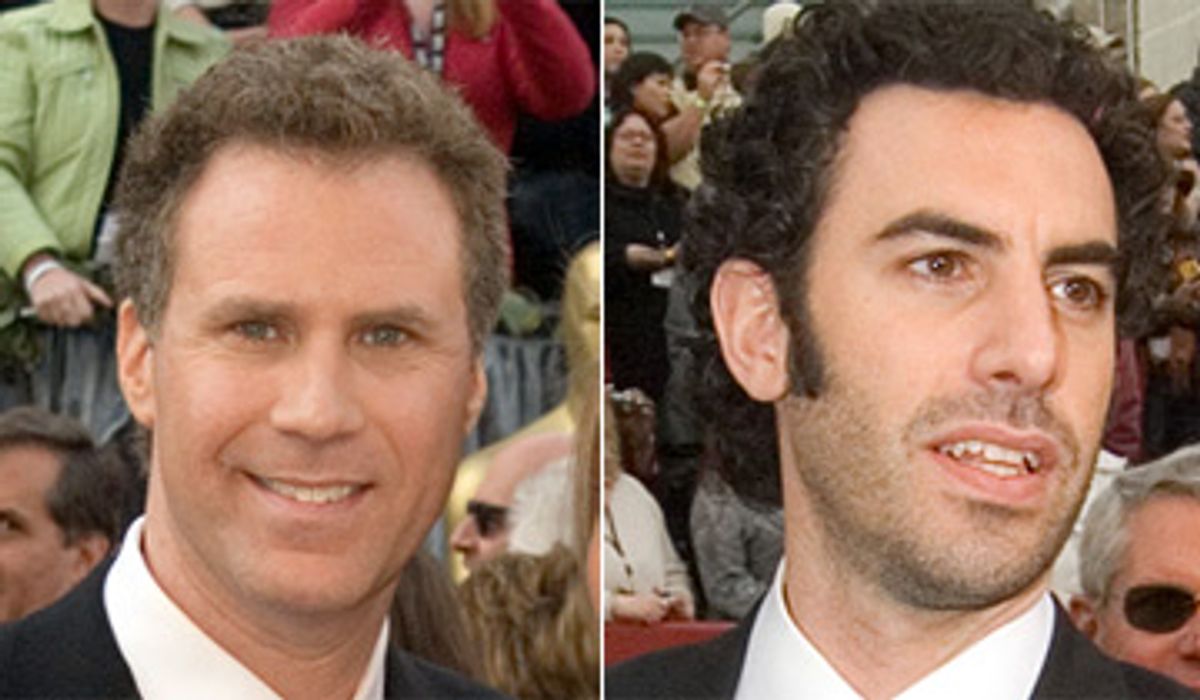 Will Ferrell (left) and Sacha Baron Cohen, who are purportedly set to play Dr. Watson and Sherlock Holmes.

It's been a long weekend of barbecues, fireworks, beer in cans and dipping your tootsies in some tepid body of water or other, hasn't it? And then there was all the stuff that happened outside the house! So let's review the truly important news you may have missed:

Madonna is absolutely not having an affair with Alex Rodriguez that contributed to his marital split, or so pronounce her various spokespods. That means she is absolutely not yet again blazing new trails in sexual liberation by being the first Other Woman in the history of Other Woman-ness to be a generation older than the jilted wife. Not to poach on the terrain of my Broadsheet colleagues, but it's a shame, really.

Is there some connection between this non-news and recent reports that Madonna's definitely-not-soon-to-be-ex-husband Guy Ritchie is planning to reintroduce the pensive homosocial loner detective Sherlock Holmes to today's viewers as an action hero? Ritchie's manly version of Arthur Conan Doyle's beloved sleuth, as yet uncast, will showcase Holmes' reputed "skills as a boxer and swordsman." Sure, it sounds like a dunderheaded, sure-to-be-disastrous idea, even like the sort of thing that might scuttle a status-oriented marriage. But hold on! I say combine this project with one of those era-blending comic-book films the Marvel people are contemplating. If it doesn't have kung-fu battles between Sherlock and the Silver Surfer, I ain't showing up.

And just to be clear, Ritchie's Holmes film is not the proposed comedy version to star Sacha Baron Cohen as the Victorian sleuth and Will Ferrell as Dr. Watson, his trusty if irredeemably dense sidekick. That version, to be produced by Judd Apatow, was announced last week by Columbia Pictures, whose spokesbeast assures the world it will be "frankly hilarious." Thanks! That's good to know. That one sounds stupid too, although it will probably make gobs of money. As Alison Willmore observes over at IFC's Indie Eye blog, the Holmes character has been so thoroughly bastardized over the years that it's pretty silly for fans to protest at this point. (She's clearly right, for instance, that Hugh Laurie's character on "House, M.D." is a thinly-veiled Sherlock ripoff.) But is there actually a gay-porn version? I mean, you know, beyond the original Conan Doyle stories?

Returning a bit closer to the nominal subject matter of my own blog, Jonathan Levine's 1990s nostalgia-trip "The Wackness" -- set in the days when Mrs. Ritchie was a mere sprat of 35 -- was a huge success over the holiday weekend, earning $172,000 in just six big-city theaters (as reported by IndieWIRE). Those are unquestionably dope, fresh, illin'-in-a-good-way numbers that suggest a summer crossover hit, and Sony Pictures Classics plans to have the movies in 600-plus theaters by August. "'The Wackness' is in the same genre as 'Garden State,'" said SPC co-president Michael Barker, with evident enthusiasm. Hmm, in that case I'll have to go back and add the words "But it sucks" to the end of my review.

French thriller "Tell No One", Guillaume Canet's adaptation of American mystery writer Harlan Coben's novel, also opened strongly for Music Box Films, a new indie distributor run by industry veteran Ed Arentz. It earned almost $170,000 on eight screens, a terrific start for a foreign-language film by any measure. While the results were more mixed for Alex Gibney's "Gonzo: The Life and Work of Dr. Hunter S. Thompson," it did well compared to the modest standards set by recent theatrical documentaries, earning close to $200,000 on 25 screens. Sergei Bodrov's Genghis Khan epic "Mongol" continues to be the counterprogramming hit of the season; it's now playing on 253 screens across the country and has earned $3.5 million.