Inside the Army's fake Iraq

Welcome to the military's Iraq Simulation, where the townspeople are Arab actors, the insurgents come from Arkansas -- and things tend to go horribly wrong. 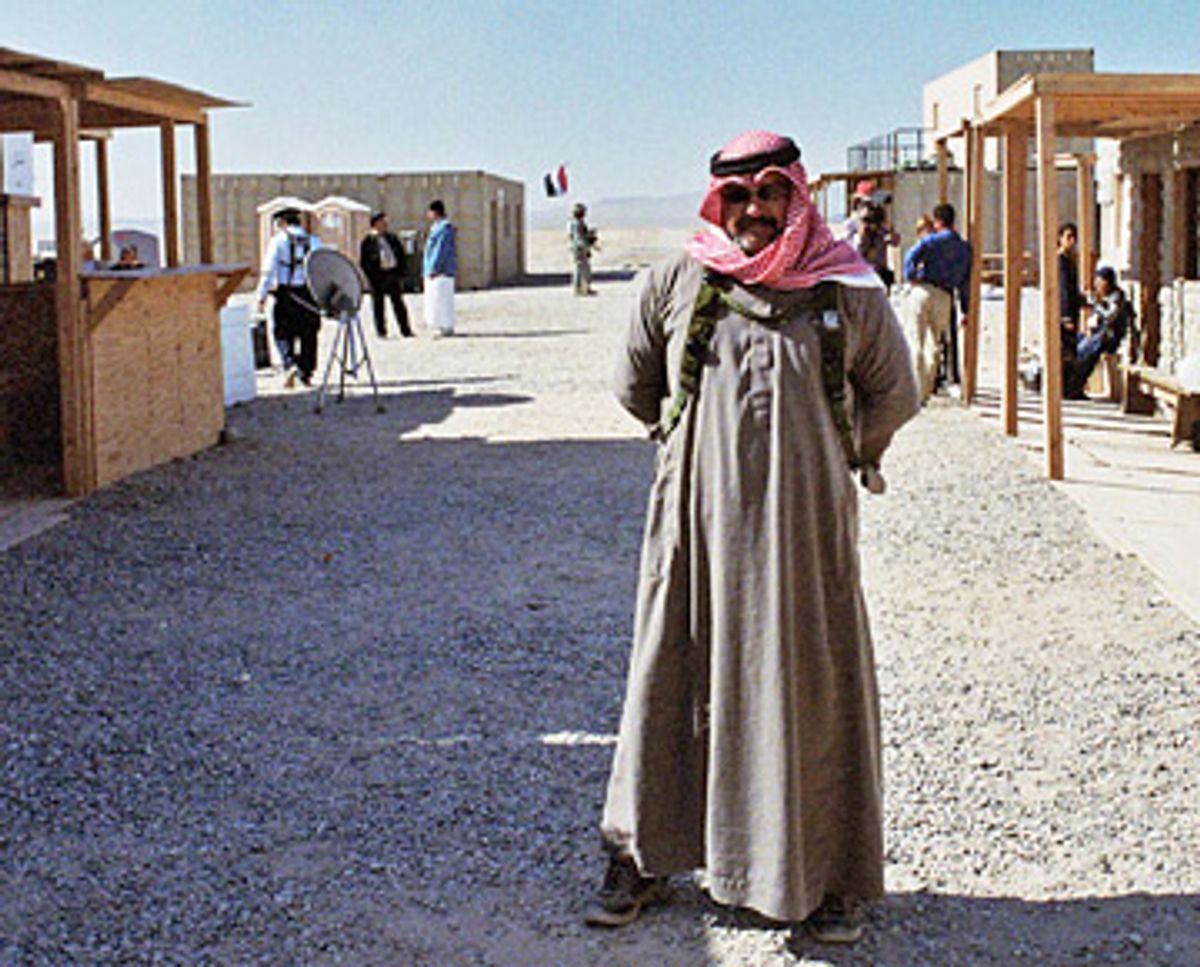 Khalid al-Khafaji, an Iraqi role player in the U.S. Army's Iraq Simulation, plays a Shiite imam in Medina Wasl, one of 13 mock villages in the simulation.

On the day United States troops arrive in Medina Wasl, an undistinguished village with a mixed Sunni-Shiite population at the center of a desert province, anti-American insurgents kidnap and murder the son of the town's deputy mayor. The American battalion's commanding officer, a thoughtful, bespectacled colonel who encourages his subordinates to be respectful and culturally sensitive, arrives with high hopes of winning hearts and minds in this remote area, but spends most of his time managing an explosive situation that is spiraling toward civil war. Even the battalion's public information officer refers to the colonel's outreach efforts as "all that 'salaam alaikum' shit."

On their first night in their new barracks, the arriving troops are attacked by insurgents who fire a mortar into the camp and briefly penetrate the perimeter wire, shooting several soldiers before escaping. A few days later, jittery U.S. troops fire on a vehicle at a checkpoint, killing several unarmed civilians. As the local population turns ever more anti-American, a local Shiite imam orders the expulsion of all Sunnis and the deputy mayor's henchmen conduct a freelance assassination campaign. The colonel orders payments to the bereaved families and promises the mayor aid in rebuilding the local water and sewer service, but the ceremony to award the contracts is ambushed by insurgents and turns into a chaotic firefight, with U.S. forces taking heavy casualties.

Then, after the debacle of Medina Wasl, the officers, men and women of the 5-82 Battalion of the 4th Brigade, 1st Cavalry Division, get on a plane and go to Iraq. Tony Gerber and Jesse Moss' wrenching documentary "Full Battle Rattle" has all the tension and urgency of a vérité-style nonfiction film about the life-and-death choices faced by American troops in the current war, but all its shooting, bloodshed, propaganda and rhetoric are a dress rehearsal. Medina Wasl is a cluster of plywood huts near Fort Irwin, in the Mojave Desert of California, populated by a few dozen role-playing Iraqi-American immigrants. The anti-American forces are themselves U.S. soldiers learning to emulate insurgency tactics; the TV reporters following the troops around are actors.

Early in the film, when the "insurgents" make a video to display their coldblooded execution of the deputy mayor's son, one of them lifts the scarf from his face to ask, in what sounds like a rural Texas or Arkansas accent, for help in pronouncing "Allahu akbar!" After that's cleared up, the officer holding the camera smokes a cigarette, checks the view-screen, and says, "Yeah -- that's the spooky look we're lookin' for." Bassam Kalasho, a beefy, phlegmatic immigrant who plays the volatile deputy mayor of Medina Wasl, turns out to be a family man who runs a corner market in San Diego. The town's "police chief," Nagi Moshi, is an illegal immigrant who traveled from Iraq to Turkey to Greece to France to Colombia to Mexico to California, and is now waiting to learn whether he will be granted U.S. asylum or deported.

Such are the oddities of life in the Iraq Simulation, an enormous military facility also known as the National Training Center at Fort Irwin. Combat brigades scheduled for deployment to Iraq are sent there for immersive, unpredictable two-week exercises designed to prepare them for the military, cultural, linguistic and physical environment they will soon face. Each of the 13 towns and villages within the simulation poses different challenges, and the outcomes are not scripted in advance. You could compare the Iraq Simulation to improvisational theater or to a video game; each action by U.S. forces leads to a response (or "inject," in military argot) dictated by simulation planners, and Lt. Col. Robert McLaughlin and the soldiers of the 5-82 had a shot at either "winning" or "losing" Medina Wasl.

Gerber and Moss were embedded, you might say, within the simulation for two full weeks, and followed the 5-82 from its arrival to its withdrawal. To this ground-level "war footage," they added interviews with officers, enlisted men, Iraqi role players, simulation planners, and the commander of the entire Fort Irwin facility. (During the Cold War, it was used to simulate U.S.-Soviet tank battles in Eastern Europe; it is now apparently being rebuilt to include several "Afghan" villages infested with Taliban fighters.) On one level, "Full Battle Rattle" captures one of the most peculiar (if conceivably most sensible) elements of the massive U.S. war machine. On another, it simply illustrates that the distinction between reality and fiction -- and the question of which one emulates the other -- is never entirely clear.

In response to the most obvious question about this movie -- why did the Army allow two documentary filmmakers from New York inside this training facility, unfettered and uncensored, for two full weeks? -- Gerber and Moss have observed that the military is proud of the Iraq Simulation, perhaps more so than of the real thing. "It is one aspect of the war effort that has gone according to plan," they write. Indeed, as the likable but bewildered McLaughlin and his troops lurch from one blunder to another, and the violence accelerates in this plywood Iraqi town (where the casualties are latex dummies with gruesome, photo-realistic wounds), the simulation comes to seem like an eerily effective replica of the real war.

If "Full Battle Rattle" begins as surreal, almost goofball farce, with a bunch of beefy guys playing a fancy-dress version of laser tag in the desert -- aided by a bunch of rented Iraqis who'd rather be watching TV in suburbia -- it ends on an ambiguous and haunting note, much closer to tragedy. The soldiers of the 5-82 head back to Fort Bliss, Texas, for a few pensive days with their families while they wait to ship out for a year-long deployment (from which several will not return). The Iraqi role-players go back to their lives on the nervous margins of American society. Nobody talks much about what went wrong in Medina Wasl, and what that might mean in the real world. It was just a game.