A toddler takes on edu-toys

Will these LeapFrog gizmos teach your kid something, or just irritate you? 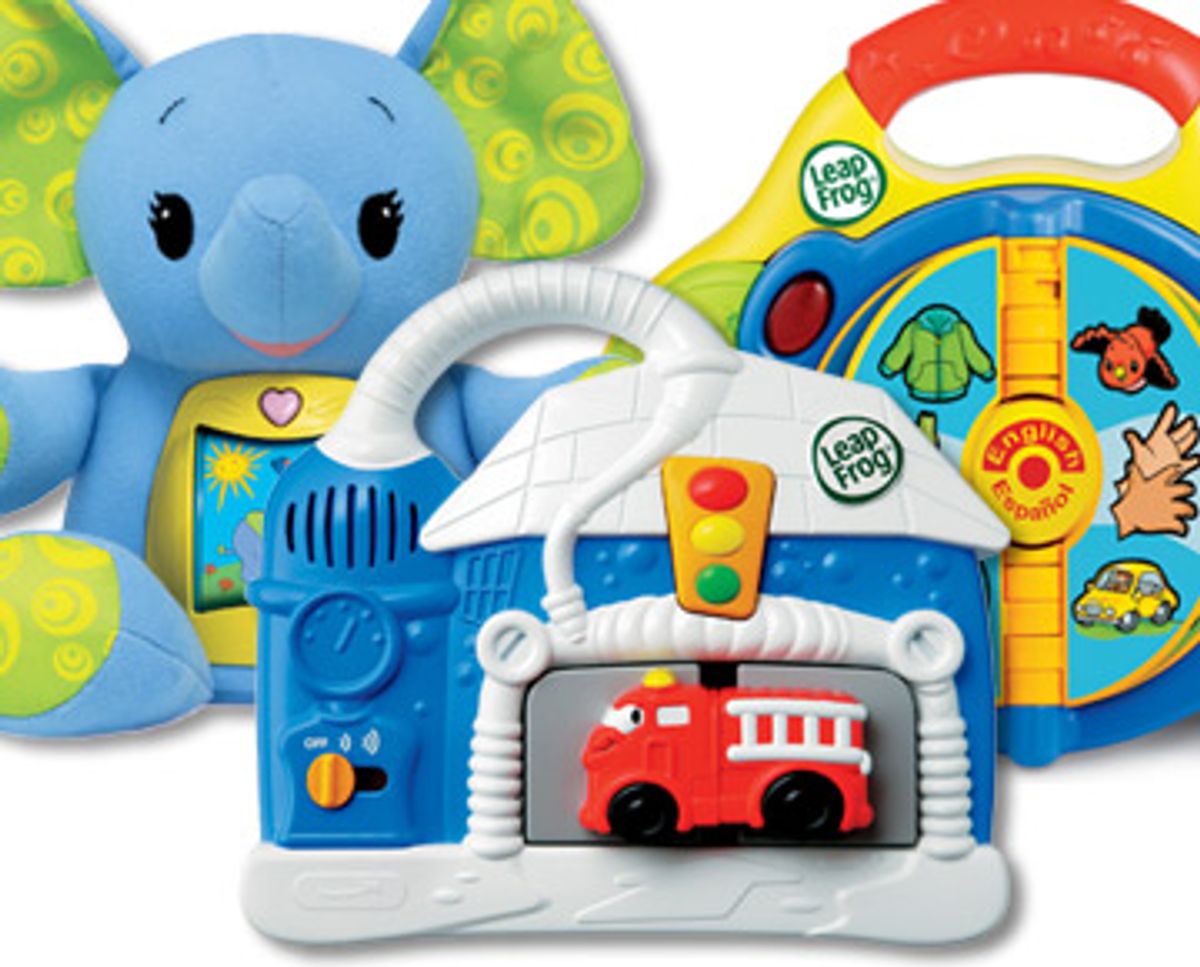 Toys for toddlers don't just roll or bounce anymore. These newfangled, battery-powered electronic gizmos shout the letters of the alphabet, count out numbers and make animal sounds, in between blasting music and flashing lights, all in the name of good-time learning fun. But do they really teach anything?

Over the past several weeks, my 16-month-old daughter and I tested three of the many educational toys made by LeapFrog, a 13-year-old company based in the San Francisco Bay Area that uses technology to try to school even the pre-preschool set.

I wanted to see not only if she enjoyed the toys -- easy to tell -- and learned anything from them -- much harder to ascertain -- but also if the toys passed this parent's irritation test: Is the value that this toy has for my child really worth the annoyance of its intermittent squealing, squawking, bleeping and blipping? Her reactions -- and mine -- were all over the map, but one toy was a big hit with both of us.

The first toy we tried, Shapes With Ella, advertised for children ages 6 months and up, is essentially a glorified stuffed animal. The soft blue elephant has a wheel implanted in her chest, which plays a few seconds of soothing music when the child spins it. Above her chest there's a pink heart-shaped button, which illuminates the wheel when a child presses it. Spinning the wheel reveals daytime and nighttime scenes of a cartoon version of Ella. The daytime scene shows a happy Ella frolicking on some grass, with a half-eaten apple precariously balanced on the tip of her trunk, underneath a smiling sun and two flying bluebirds. Ella scores parental points for nutritious food propaganda, since she seems to be dancing in joy about this tasty red apple she's apparently half-munched.

Spinning the wheel again shows a scene of Ella sleeping on the grass under a slumbering half-moon. Above her are some stars, linked by dotted lines, like constellations, which form a square, a circle and a triangle. That's the "shapes" part of the toy, I gather.

The cardboard box that Ella comes in claims that she introduces children to shapes, facial features, daytime and nighttime routines. I'm not sure if any of that came across to our daughter. But she does enjoy spinning the wheel to watch the scene change and make the music play, as well as pressing the button to see the light go on and off. The music Ella plays is soft and calming, so it's thankfully palatable to adult ears.

I wouldn't predict that Ella is destined to be a beloved favorite in our home, but she's also not likely to be banished to a dusty box in the garage by a parent who can't stand the noise she makes.

The Learn and Groove First Words Radio, which goes on sale in September and is aimed at kids 12 months or older, promises to teach tots vocabulary, word categories and fine motor skills. The toy presents hard plastic pages for the child to turn; when each page is flipped, the radio makes a satisfying page-turning sound. At least, it appears to satisfy my daughter, because just turning the pages back and forth to make this sound is the primary way she plays with this toy. On each page, there are six images, depicting things like a cat, a plate of spaghetti and meatballs, a faucet spewing water and a pair of stomping feet. Pushing the button next to an image causes a child's voice to sing a little exclamatory ditty. For instance, pressing the button next to a pair of shoes plays, "Shoes! I love my shoes! They are red. They are new. I love my shoes! Shoes!"

To make matters more cacophonous, there's a big button in the middle of the radio that allows the child to switch the language of the toy from English to Spanish and back again. That would be fine, if there was an easy way for an adult to ensure the toy stays on one language setting, at least temporarily. There's not.

Our daughter prefers to push the language button over and over again, causing the toy to switch wildly from English to Spanish and back again, the radio exclaiming over and over, "English! Español! English! Español!" As you can imagine this greatly amuses her, but quickly irritates me.

When I push some of the buttons next to the images on the radio for her, she tends to repeat the words she already knows, like "cat," "dog" and "water." She doesn't seem to have much reaction to words that she has not said before. My suspicion is that this is one learning toy that will wear out its welcome among the adult members of our household before the toddler gets much out of it that's new.

Finally, we tried the Fridge Wash and Go Magnetic Vehicle Set for ages 12 months and up. Of the three toys we tested, this one was the clear favorite among both the toddler and the adults around here. The toy consists of five different vehicles -- a car, a train, a fire engine, an airplane and a boat -- each of which is cut in half. All 10 pieces of the vehicles are magnets. A child can then fit the pieces into a station -- also a large magnet -- that fits on your refrigerator door. If the kid puts the right pieces together in the correct sequence to form, say, a green train, the toy (in a man's voice -- rare for these types of toys) exclaims: "Green train! You made a match!" The guy then sings a song about the train, toots its horn, and gives some vehicular facts: "A train has a conductor. All aboard!"

But the great thing is that if the child puts the wrong two pieces together -- say half a fire engine and half a car -- the toy sings a silly little song about that too: "A fire engine car? You can wash that fire engine until it's clean. Wash that car. Make it gleam. But I'll tell you something that you should know. A fire engine car, it won't go."

These songs drive our daughter into paroxysms of spontaneous dance, and they're catchy enough that my husband and I find ourselves singing the little ditties to her, too.

She doesn't quite yet have the fine motor skills to fit the pieces into the station by herself, but she can with a little help. On her own, she likes to move the magnets around on the refrigerator, which is a good diversion from all the other regular magnets that live there (they're too small for her to safely play with, and have to be kept out of reach). It's also great to have a toy that lives in the kitchen -- it can keep her attention while we adults are getting meals together -- but doesn't end up scattered around underfoot.

What exactly is she learning from these vehicle fridge magnets? OK, she's definitely working on motor skills, both in terms of physical dexterity and things that go vroom. But is she learning that there is no such thing as a fire engine car? Maybe. In the end, with this toy, I don't care that much about the educational claims, since she enjoys it so much, and its soundtrack doesn't drive Mom and Dad up a wall.