My interview with murderer Hans Reiser

Five days before the computer genius who killed his wife led police to her body, he was remorseless and angry in defense of his innocence. 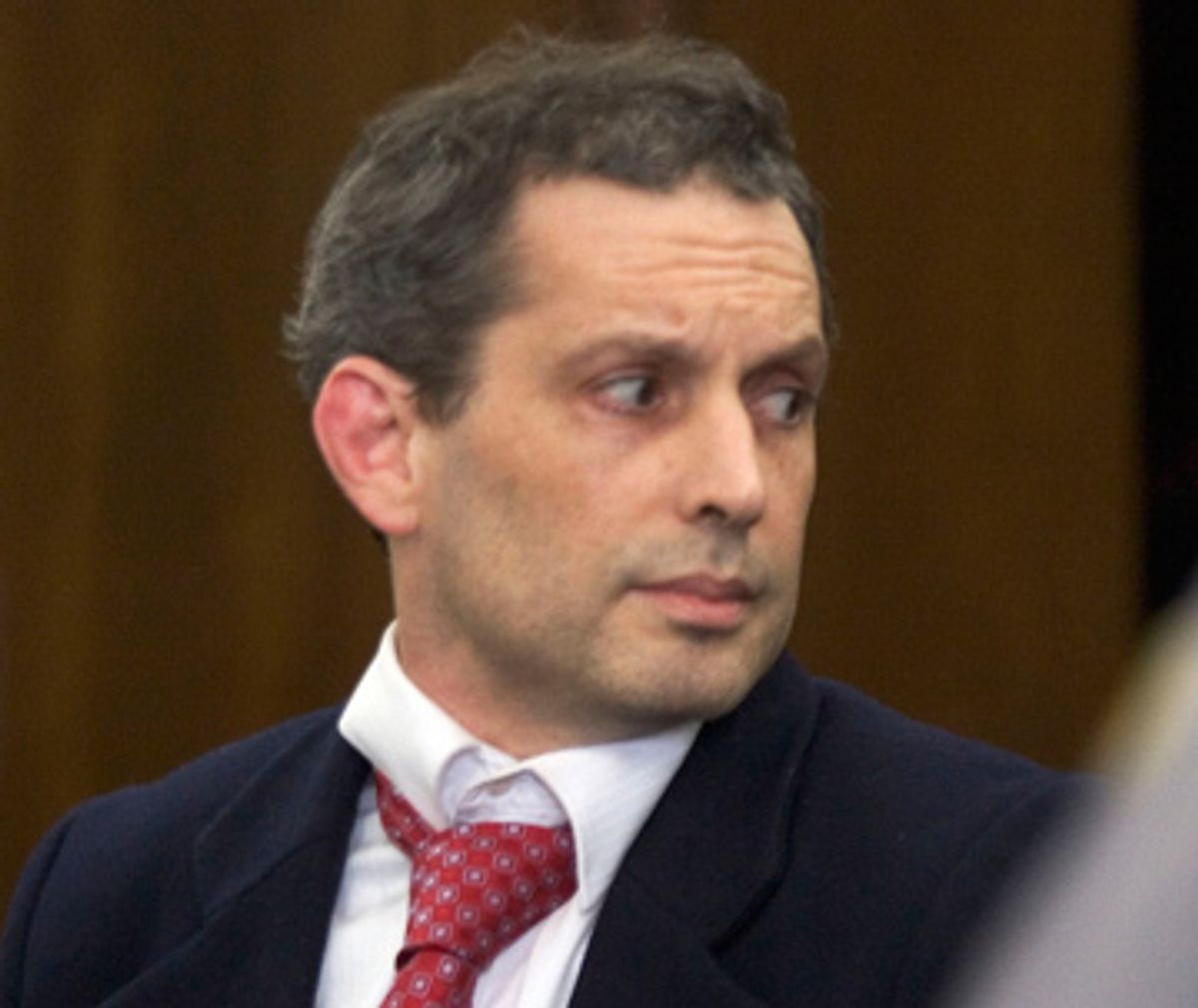 I showed up at the Santa Rita Jail during visiting hours to meet Hans Reiser, the Linux programmer found guilty of killing his estranged wife. He was being held in Santa Rita awaiting sentencing and I knew if I was ever going to talk with him, I had to do it before he was transferred to state prison, where the rules regarding media visits are much more strict and it can take months for even relatives to get approval.

The Hans Reiser trial was big news in the San Francisco Bay Area and high-tech community, with both Wired and the San Francisco Chronicle live-blogging the proceedings and the Oakland Tribune assigning a reporter to it full-time. "48 Hours" and "20/20" both did TV specials. Hans was considered a genius, a minor celebrity in the high-tech community. His filing system was considered by some to be a milestone in computer science. His wife, Nina Reiser, was a gorgeous Russian bride studying to be a doctor in America. Hans and Nina had two children together and a fantastically contentious divorce.

The case had everything the media looks for. For five and a half months, I attended the trial every day. The defense pushed the theory that Nina was hiding in Russia, her disappearance part of some larger master plan. It said charges against Hans were based on circumstantial evidence. Nina disappeared after dropping the children with Hans on Sept. 3, 2006. When told two days later his estranged wife was missing, he refused to talk to the police. They started following him but he engaged in counter-surveillance, driving in circles, pulling over to the side of the road, exiting and entering the freeway. Within two days of being notified Nina was missing, he hired a well-respected criminal defense attorney, William Du Bois. Hans withdrew large sums of money from the bank. When the police found his car -- it was missing the passenger seat and rear assembly -- they uncovered two books on murder, including "Homicide" by David Simon. Simon wrote about the importance of not talking to the police and how a crime is rarely solved without a body. Without a body, you first have to prove the person is dead. Hans would lead police to Nina's body on July 7, 2008. But that was still five days away.

Hans was being held in cellblock 9. The visiting area is a row of partitioned cubicles. The visitor and inmate speak over a phone line, face to face, separated by thick, soundproof glass. A couple of reporters had tried to visit and he had hung up the phone on them when they posed their first question, so I knew I wasn't going to ask him any questions.

He was waiting for me in cubicle 7 wearing bright jailhouse reds. Since the trial, Hans has grown his hair out in a crazy gray bush around his head. He sat across from me with several folders full of paper and a thin silver pen. He lifted the receiver and said he recognized me from court and wasn't talking to journalists.

"I'm not really a journalist," I said. "I've written a book about you." This caught his attention. He tilted his head and lifted his eyebrows. What I'd said wasn't exactly correct. I had written a book, and his story was crucial to it, but the book was really about me. There were other murderers, people I grew up with like Ted Light, who was given 60 years for shooting a homeless man with a crossbow. But a series of strange connections had led me to Hans. The book was half memoir, half true crime.

"How could you write a book about me without contacting me?" he asked.

He said he wanted to see the manuscript before it was published and I told him it didn't work that way. When he pressed as to why that was I told him it's one of those things that only other writers understand. It's just the nature of things. A more complicated explanation would have included that people think they like being written about when they're talking to a writer, but then they read what was written and their reflection punches them in the face. Janet Malcolm referred to this experience as flunking a test you didn't know you were taking. Anyway, a 12-person jury found Hans Reiser guilty of murdering his wife. I don't owe him anything.

He said he still wouldn't answer my questions unless I put them in the mail to him. I told him I didn't have any questions and I probably wouldn't get to see him again. If there was anything he wanted me to know, I said, now is the time.

He spoke for the next 40 minutes. I'd already seen him take the witness stand for 11 days, so my expectations were low. He was endlessly dishonest, self-justifying, and pedantic. But I was curious whether I would learn something about his character I hadn't known before. I was face-to-face with my murderer for the first time. Part of me wanted to like him, to believe there's a shred of decency in everyone.

Hans told me the investigator had failed him. He maintained his innocence and said there was a list of people who should be looked into. The first was "Alexia Orange." (I'm protecting her real name.) He said she had lied about Hans pushing his wife, painting him as an aggressor during a custody hearing. Alexia never testified in Hans' murder trial. But that wasn't the point. The point was that he felt like he was mistreated; his concerns hadn't been taken seriously. Next he named the teachers at the children's school. They had also fabricated information, he said.

"I requested the PI investigate nearly two dozen people but he didn't investigate any of them. The teachers gave conflicting stories about a therapist's report. I'd be really impressed if you could get one of them to confess to making it up."

It was amazing that Hans thought I might want to impress him. I had spent nearly half a year following his trial. The evidence was overwhelming. He said if I tracked down the teachers he would give me more names. He wanted me to prove myself first.

"We would like it to be true that S/M is neatly compacted inside the mind," he said. "S/M crosses the wires of pleasure and pain, and those wires run deep. It crosses the wires between loving and hating as well. The result is that the more a sadomasochist cares about someone the more dangerous they are to them." He thought there should have been more of a focus on Sean's sexuality during the trial. But we both knew that Sean hadn't killed Nina.

Everything Hans said reinforced the image I already had of him. He wasn't interested in what was true, only in whether or not he had been treated fairly. There wasn't a shred of remorse in his body. He was a sociopath, incapable of caring about another human being. A narcissist. A manipulator who thinks everybody else is stupid. The strangest thing about this murderer is how he never gets away with anything. Nobody ever believes him but he keeps lying anyway. He's a genius who invented a new way to store information, supervised millions of lines of complex code, and he has no idea how he is being perceived. I wasn't interested in being his private investigator.

Since being found guilty, he had been trying to negotiate a deal for a reduced sentence in exchange for taking the police to Nina's remains. He wanted them to drop the charge from murder one to manslaughter, which the district attorney was unwilling to do. It doesn't seem to bother him that his two children would never know for sure what happened to their doting mother after they last saw her Labor Day weekend 2006, when they were only 4 and 6 years old.

Finally I cut him off. I said I could track down all these people he was talking about. What I found might or might not point to an unfair trial (I doubted it) or mean that his children shouldn't have been taken away from him. But it wouldn't mean the verdict was incorrect. Was there anywhere I should look that might hint at his innocence?

"If you're guilty of murder, who cares if the schoolteacher misremembers something?" I said.

He stopped talking then, looking at me for a second, realizing perhaps that I wasn't on his side. He gathered his papers. "You can believe whatever you want to believe," he said, hanging up the phone. He turned his back on me and called for the guard to take him back to his cell.

Five days later, Hans took the police to Nina's body. He had buried her less than a mile from his house, not far from the trailhead. He lived close to the Redwood Regional Park, a place where you could hike for days. Search and rescue had scoured the area with ground troops and cadaver dogs, but the body was hidden in a shallow grave more than 100 feet down a steep ravine. She had been strangled. His lawyers stated that Hans was remorseful; that he was trying to make things right. I knew that wasn't true. He had maintained his innocence since being arrested in October 2006. I was the last journalist to interview him before his confession. He wasn't remorseful, he was angry. He still felt the world owed him something.