He voted against Bush's tax cuts, but now, despite a ballooning deficit, he wants to slash taxes even further -- with most of the benefits going to the rich. 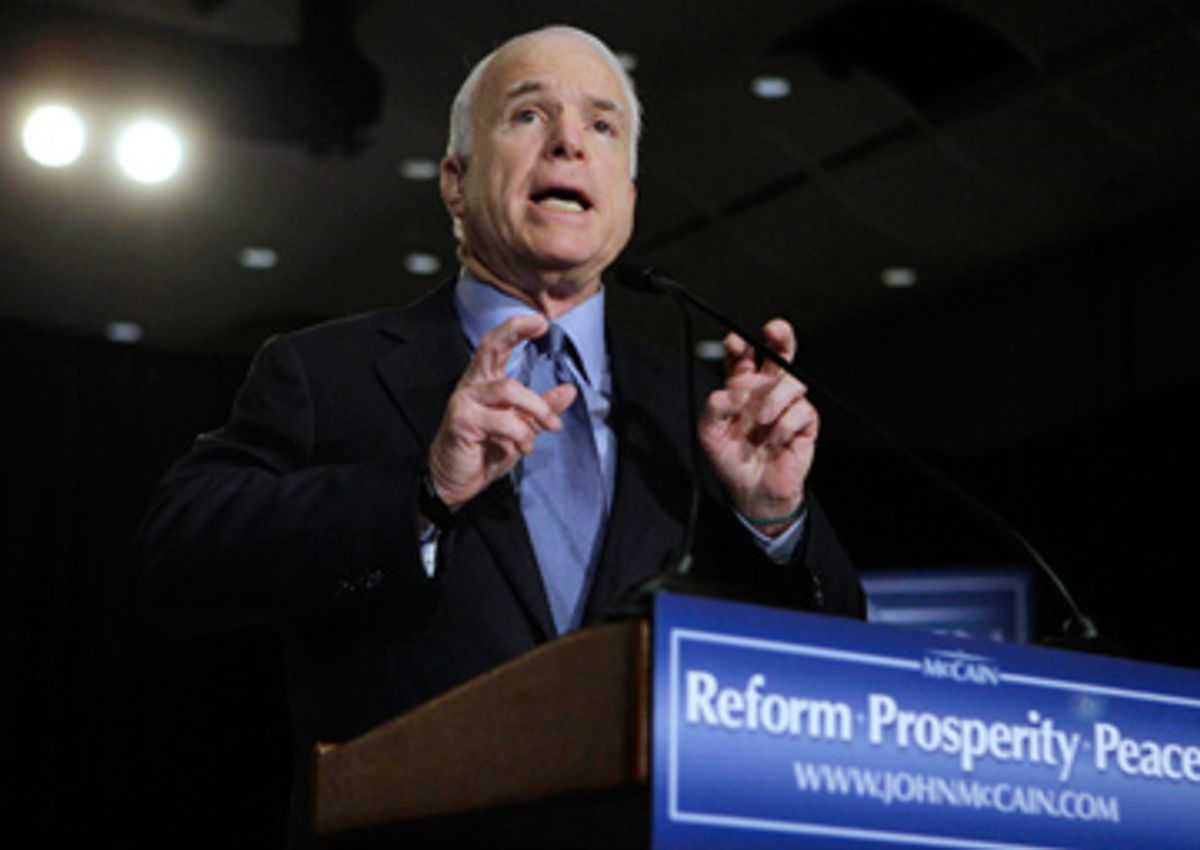 As gas and food prices soar and job losses mount, John McCain launched a new effort this week to reassure Americans that he has a plan to bring back economic growth. McCain spoke at a town-hall event in Denver Monday and will travel to the swing states of Ohio and Pennsylvania on Wednesday and Michigan and Wisconsin on Thursday and Friday to spread his economic message.

The economy has vaulted past Iraq and terrorism as the most pressing concern on voters' minds this election season, and both McCain and Barack Obama are trying to show they feel voters' pain. McCain has called for help for those facing mortgage foreclosures and has pledged to balance the federal budget by 2013. But the centerpiece of his economic plan is a tax-cut proposal more sweeping than anything envisioned by George W. Bush.

"The choice in this election is stark and simple," McCain said at the Denver town hall. "Senator Obama will raise your taxes. I won't. I will cut them where I can."

But according to a respected, independent group of tax-policy experts, McCain’s plan would balloon the deficit and provide a windfall to the wealthy while affording only nominal relief to middle-class taxpayers. McCain has moved toward the Republican base on a handful of issues this campaign season, but his tax plan might actually shift the erstwhile deficit hawk to the right of the current president.

A 2004 study by the Congressional Budget Office found a full third of Bush's controversial 2001 and 2003 tax cuts went to the top 1 percent of earners. McCain's tax cuts would be more massive than Bush's, and appear to skew even more to the wealthy. President Bush touted his breaks as providing a boost for the economy, but some tax-policy experts credit Bush's tax policy with shifting the tax burden to the middle class, ballooning budget deficits, and contributing to a widening disparity in personal wealth.

In addition to permanently extending Bush's tax cuts, the major features of McCain's plan include slashing the corporate tax, reducing the estate tax, giving companies a deduction on new equipment and increasing the child tax credit. McCain also wants to extend relief from the gas tax this summer and the alternative minimum tax (AMT), which has been hitting upper-middle-class families with higher tax rates in recent years.

McCain's most sweeping proposal is allowing taxpayers to figure their taxes under an optional alternative system. McCain's campaign hasn't fleshed out the details, but said it will offer a large standard deduction and an increased personal exemption.

To get a sense of McCain's ambition, his tax cuts would cost the federal budget as much as $4 trillion from 2009 through the end of 2018, according to the nonpartisan Tax Policy Center. That's eight times the size of the Pentagon's base budget this year. Bush's cuts would cost only $1.6 trillion if extended to cover the same ten-year period.

Stephanopoulos: "John McCain is calling for an extension or maybe even an enhancement of the Bush policies?"

The most in-depth comparison to date of McCain and Barack Obama's tax plans was performed by the Tax Policy Center, a joint venture of the center-left Brookings Institution and Urban Institute that is nonetheless staffed by both Republicans and Democrats -- co-director Eugene Steuerle was a deputy assistant secretary under Ronald Reagan -- and is known for its methodological rigor. Its 38-page analysis found that McCain's proposals would make the tax system even "more regressive" than permanently extending the Bush tax cuts of 2001 to 2006. McCain would accomplish this by following Bush's blueprint and then supersizing it: providing "relatively little" tax relief to low- and middle-income earners, while giving "huge tax cuts" to the highest income brackets.

The Tax Policy Center's computations show stark differences between the Obama and McCain plans in their relative impact on middle-class and high-income taxpayers. A middle-class family making $66,000 a year would see their taxes drop by $319 a year under McCain's proposal, while a wealthy family making $604,000 a year would see a cut of $45,000. By contrast, Obama offers the biggest breaks for taxpayers at the bottom and in the middle of the income spectrum, while imposing sizeable tax increases on some of the highest earners -- those making more than $250,000 annually. Under Obama's plan, the middle-income family would receive a tax break that is three times larger than McCain's -- $1,042. The wealthy family would see a tax increase of $116,000 a year.

McCain’s campaign did not respond to Salon's requests for comment, but McCain’s economic advisor Douglas Holtz-Eakin called the analysis "misleading on the whole and wrong in some particulars" in a response on the Tax Policy Center’s blog. Holtz-Eakin’s main argument was the analysis did not give enough weight to the spending cuts that will offset McCain’s tax cuts.

McCain would likely be making any economic proposals to a hostile Democratic Congress, so his ability to implement new tax cuts is questionable. But observers on the right have offered praise for McCain's intentions anyway. Conservative anti-tax crusader Grover Norquist called McCain a "tax-increasing Bolshevik" in 2005, and slammed him early in this election cycle for balking at signing a no-tax-increase pledge. Now he lauds McCain. When asked by Salon if he preferred the McCain or Bush tax plan, Norquist answered quickly.

"The McCain tax policy is to continue the Bush tax cuts and add three more, so I prefer McCain," Norquist said. He paused for a moment and then added. "McCain's is bigger, better."

But Norquist concedes there is little chance -- at least initially -- of McCain’s tax plan making it through a Democratic Congress in 2009. "They will mangle it," Norquist said. However, he believes Democrats might go for aspects of McCain’s plan, such as AMT relief and extending some of Bush’s 2001 and 2003 tax cuts. In the long run, he is optimistic Democrats will warm to McCain’s entire plan.

If he were somehow able to implement it, the biggest question surrounding McCain's plan is how he would pay for it. The bill is staggering, per the Tax Policy Center's estimates. If McCain succeeded in extending Bush's existing tax cuts, it would cost the government $1.6 trillion from 2009 to 2018. Reducing the corporate tax rate would dock revenues by $735 billion, and abolishing the AMT would cost $1.1 trillion.

On Monday, McCain reiterated a pledge to balance the budget by the end of his first term in 2013. (After making the proposal earlier in the campaign, he had backed away from it in April.) To achieve that goal, McCain said Social Security, Medicare and Medicaid reform are needed. He also plans to propose a year-long moratorium on new discretionary spending (except for defense and veteran-related costs) and to veto bills with earmarks.

However, the Tax Policy Center found McCain’s offsets would not come close to paying for his tax cuts. To be fair, the Center's analysts are also dubious about how Obama will pay for his tax breaks. They found that both presidential candidates' plans would add massive sums to the national debt: $4.3 trillion over a decade for McCain and $3.3 trillion for Obama.

Both proposals come as Bush's tax cuts, war spending and a weak economy have sent the federal budget zooming into the red. The 2008 deficit is likely to reach $400 billion -- a near record. The liberal Center on Budget and Policy Priorities estimates the yearly cost of AMT relief and making Bush’s tax cuts permanent alone will be more than $400 billion. That price tag would exceed the 2007 budgets of the Department of Education, Homeland Security, Housing and Urban Development, Veterans’ Affairs, State, Energy and the Environmental Protection Agency.

"We’re not in as good a fiscal shape as we were in January 2001," says Alan J. Auerbach, professor of economics at the University of California, Berkeley, "because of the tax cuts of 2001 and 2003 primarily ... We are much closer to falling off a cliff now than we were [prior to the Bush administration] because of the retirement of the baby boom generation, which is a very big increase in entitlement spending more or less mandated by Social Security and Medicare in the coming years."

Auerbach, who has endorsed Obama's tax plan, predicted a coming budget crunch, and said McCain's plan to balance the budget is dubious. "I don't know how he could possibly do that with his tax policies. He'd have to make unrealistic cuts."

Even conservatives acknowledge McCain will have a daunting challenge to balance the budget. "Bottom line is it’s plausible, but wouldn’t be easy," said J.D. Foster, a senior fellow at the Heritage Foundation and a former Bush administration official in the Office of Management and Budget. Foster said McCain would have a tough time getting spending cuts through a Democratic Congress.

The most striking aspect of McCain’s new tax policy is how far the candidate has traveled from where he once stood on the issue. Former Republican Rhode Island Sen. Lincoln Chafee, who joined McCain as one of only two Republicans to vote against Bush’s tax cuts in 2001, believes McCain’s move is a political calculation.

"He’s tailoring [the tax cuts] to a Republican base," said Chafee, who now identifies as an independent and has endorsed Obama for president. "That requires a pretty much 180-degree turn on his part."

As George W. Bush’s $1.35 trillion tax cuts neared a final vote in 2001, McCain rose on the floor of the Senate to denounce the signature domestic policy proposal of the leader of his own party.

"I cannot in good conscience support a tax cut in which so many of the benefits go to the most fortunate among us at the expense of middle-class Americans who most need tax relief," McCain said. He tried to reduce the cuts for the wealthiest taxpayers and then cast a "no" vote.

It was an essential chapter in the story of the "maverick" McCain. He polished that reputation again in 2003 when Congress clashed over another round of Bush tax cuts, this time a $350 billion package. McCain lobbied to reduce the size of the cut, before joining with only two other Republicans in voting against it.

McCain has also built a reputation as a deficit hawk, which could be endangered by his tax plan. The Arizona senator has regularly chided the Pentagon for pork in its budget, railed against earmarks, and opposed Bush’s prescription drug benefit, calling it an "unfunded liability."

McCain’s evolution on taxes and a host of other issues may have made him a more mainstream Republican and could win him conservative votes in November, but it’s odd coming from the man who issued the following warning during the debate over Bush’s 2003 tax cut:

"At a time of war, at a time of economic stagnation, at a time of rising national debt ... one might expect our national leaders to pursue policies calling for shared sacrifice to achieve shared benefits. Regrettably, that is not the case."