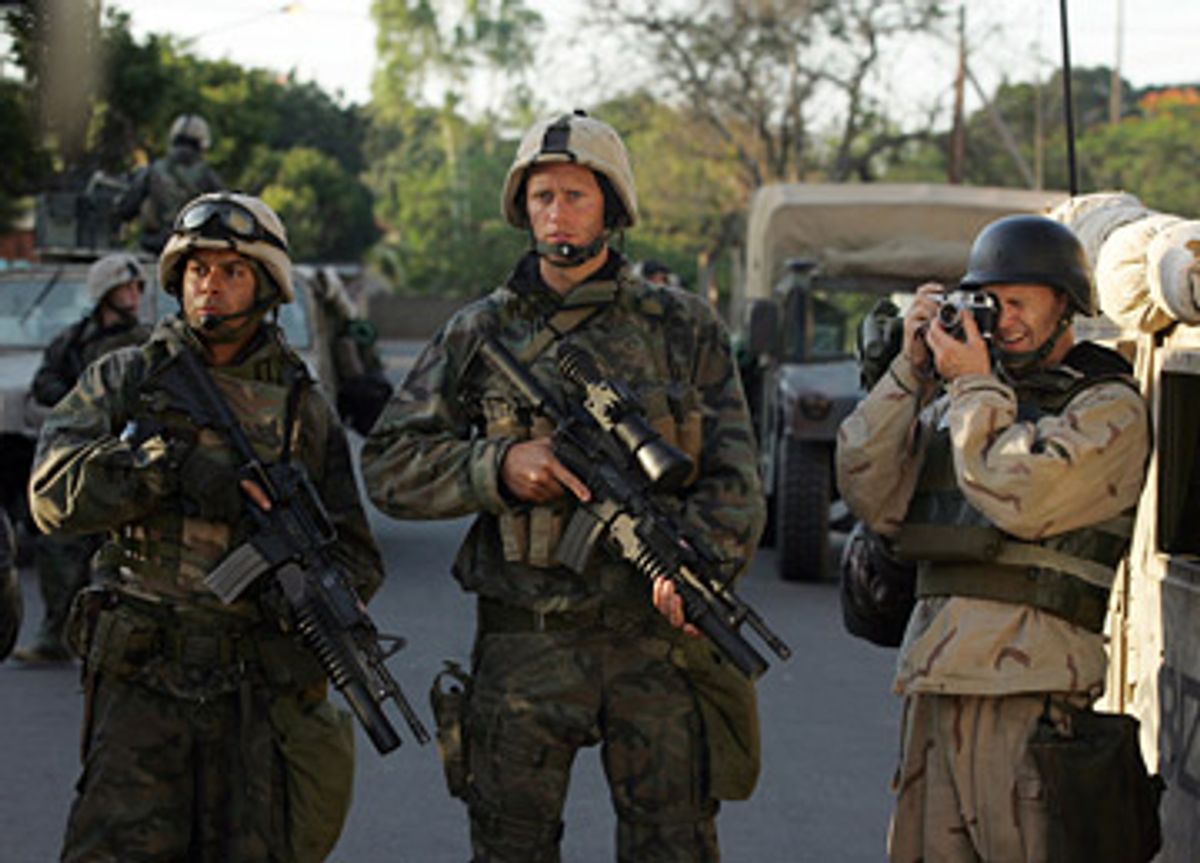 They certainly got the profanity right.

It's 15 minutes into the first episode of "Generation Kill," the new HBO miniseries that starts on Sunday about a Marine battalion in Iraq, and I am already inundated with the familiar cacophony of racial and homophobic slurs, military jargon, graphic homoerotic passages and explicit diatribes you may not want your mother to hear. This is language I learned to understand well, if not speak it, during the time I spent as an embedded reporter with American troops in Iraq.

Such invective-laced tirades serve a purpose that is as much a fundamental part of the Marine Corps as "semper fi": The men spew out expletives and they bond. No one gets offended; this is just how they communicate with each other in their testosterone-loaded world, where swearing approaches an art form, almost any sentence uttered requires a translation into standard modern English, and the words "cocky motherfuckers," uttered by the battalion commander, are as close as it gets to terms of endearment.

The veracity of Marines' communication habits is not the only thing the creators of "Generation Kill" got right. For the most part, the miniseries' take on the Marines who helped invade Iraq in the spring of 2003 rings as true as a drill instructor's upbraiding of a teenage recruit about life in the Suck.

As in the real Iraq, in "Generation Kill" -- which is based on the book of the same name by Evan Wright, a Rolling Stone reporter who was embedded with 1st Recon Marines during the invasion -- Marines bitch about food, their officers, faulty equipment, the inconvenience of defecating during wartime, and the shortage of opportunities to kill some "hajis" (the derogatory term for Muslims that has been almost universally adopted by American troops in Iraq). As in the real Iraq, they stuff dip under their lips and then spit it out into empty Gatorade bottles. They spend their downtime masturbating over photos of other people's girlfriends and guffawing in contempt of peace-loving letters they get from schoolchildren back in the States. The miniseries even got right the mismatched Marine uniforms -- the corps in 2003 was in the process of transitioning from the old desert camouflage uniform, which Marines shared with the rest of the military, to the new, pixelated camouflage pattern (commonly referred to as "digi-cammies") they currently wear -- and the sheets of orange cloth that all U.S. land forces stretched over the hoods of their humvees to signal to American warplanes that these are friendly vehicles. Kudos to Sgt. Eric Kocher, the series' military advisor who was a member of 1st Recon Marines during the invasion.

Most important, "Generation Kill's" action scenes crackle with the real-life confusion of the Iraqi battlefield, which is nothing like the cut-and-dried heroics of, say, the "Sands of Iwo Jima."

In the war zone that has no clearly defined front lines and where the elusive enemy wears no uniform, one of the toughest tasks is making decisions under fire. For the most part, the Marines don't want to act improperly, but even in such a well-trained military as that of the United States, the extreme stress of war -- and the conundrums war brings -- sometimes can push people to lose self-control. Often, the situation forces them to make decisions many will question -- like the time the 3-6 Marine battalion, with which I spent some time as an embedded reporter in the fall of 2005, fired a tank through a civilian house to respond to a rocket-propelled grenade round someone had shot at them from behind the house. An Iraqi family was inside the house; the American tank shell badly injured a baby.

But this was Karabila, a border town near Syria that American military believed al-Qaida used to smuggle fighters and weapons into Iraq, and an al-Qaida stronghold where billboards encouraging Iraqis to kill Americans lined the roads the same way that billboards in the States encourage Americans to buy the latest Toyota SUVs. This was Operation Iron Fist, a massive American offensive the goal of which was to reclaim control of the border towns on the Euphrates River from insurgents in time for the referendum on Iraq's first post-Saddam Hussein constitution. The tense offensive -- during which about 1,000 Marines swept through four towns, down perilously booby-trapped roads, taking fire from Iraqi snipers and dodging enemy mortars and rockets -- showed the ability of the Marines to go into enemy territory and kick ass, but also showed the limitations of that kind of head-on approach in towns where civilians live. Earlier during the offensive, the same Marines led bomb-sniffing dogs -- animals that Islam considers almost as unclean as pigs -- into a mosque they had suspected was being used for weapons storage.

The Marines in "Generation Kill" confront similar quandaries in almost every one of the seven episodes. In the first segment, they are told to abandon a group of surrendered Iraqi Republican Guard members even though these Iraqis will almost certainly be killed by Hussein's vicious Fedayeen Saddam death squads -- and even though it violates the Geneva Conventions, which obligate a fighting force to protect surrendered enemy combatants. In another episode, 1st Recon Marines choose not to send a child they had wounded to a field hospital because the resulting delay would be detrimental to their push north toward Baghdad, and even though leaving the boy without elaborate medical care means he would almost certainly die. These decisions -- and the Marines' mixed reaction to them -- are as realistic as the scenes of nighttime battles, when tracers light up the sky like deadly fireflies.

But as much as watching "Generation Kill" made me feel like I was, once again, riding in the back of a dusty, sweat-drenched humvee, I could not help noticing some inconsistencies. Out of necessity, the miniseries was filmed in Africa, where the vegetation (and lack thereof) is similar to the barren wastelands of Mesopotamia (shooting in Iraq was obviously a no-go). However, a few slanted rooftops give away that the Marines on the screen are not in the ancestral land of Iraqi Shia tribesmen, who would never put a slanted roof on top of their mud-brick huts, since that would deprive them of a place to store water, dry laundry, and stay cool during Iraq's impossibly hot summer nights.

Also, in the miniseries almost no one smokes. Good for them, of course, but I have rarely met a man who carried an M-16 and didn't carry a pack of Newports or Marlboro Reds (or bum them off someone who did). Even as they wait stealthily for a nighttime raid or set up mortars under a moonless Iraqi sky, most real-life American combat troops smoke, carefully cupping their hands over the butts so that enemy snipers don't see them.

And as close as "Generation Kill" comes to nailing the particular vernacular of American Marines, I found it odd that the film's Marines had no standard greeting. In the Army, the battle cry "hooah!" is commonly used as a way of saying hi. The 3-6 Marines, the unit I was embedded with in 2005, growled at each other, apparently celebrating the elite fighting force's nickname "Devil Dogs" (which dates back to World War I, but the origins of which are disputed). And, despite the obscenity-laced and military jargon-saturated nature of the dialogue in "Generation Kill," sometimes the conversation seemed a bit too stilted. More than once, Cpl. Ray Person (played by James Ransone), whose comrades identify him as "whiskey tango" (Marine-speak for "white trash"), launches into diatribes that are far too sophisticated and scripted for any enlisted Marine I've met.

"And although peace probably appeals to tree-loving bisexuals like you and your parents, I happen to be a death-dealing, blood-crazed warrior who wakes up every day just hoping for a chance to dismember my enemies and defile their civilizations"? I don't think so. "I'm gonna go fuck me up some hajis" is much more like it.

Oddly enough, it's the Rolling Stone reporter that the miniseries gets really wrong. For someone who spent two months riding through vicious battles with an elite Marine unit, the Evan Wright character is too often surprised, too often afraid, too often caught unaware. Everyone knows that reporters embedded with units are not exactly the brawniest of warriors. But in order to produce the detailed, insightful stories from the front, and, later, write the book on which the miniseries is based, Wright had to win the trust of the troops, and I'm sure he didn't do that cowering in his seat.

But most amazingly, Wright's character in the movie almost never asks questions. The real Wright must have talked up a lot of Marines, asked a lot of questions and taken a ton of notes. The on-screen Wright (played by Lee Tergesen) spends most of the time on the screen riding around in the back of the humvee silently, with a look of trepidation or surprise on his face -- and his notebook very rarely comes out. Trust me, even the most lily-livered, panicked reporter will jot down something -- "They're trying to kill us again," or "Oh, shit!" if nothing else, out of a knee-jerk reaction to fear.

Even watching "Generation Kill," I found myself taking notes as though I would need to write up the action I was witnessing -- a testimony to the veracity of the battle scenes. But in a film that got so much right about Marines in this war, they messed up on the journalist. My colleague on-screen rarely wrote a word.