Propped up by a culture of fear, TSA has become a bureaucracy with too much power and little accountability. Where will the lunacy stop? 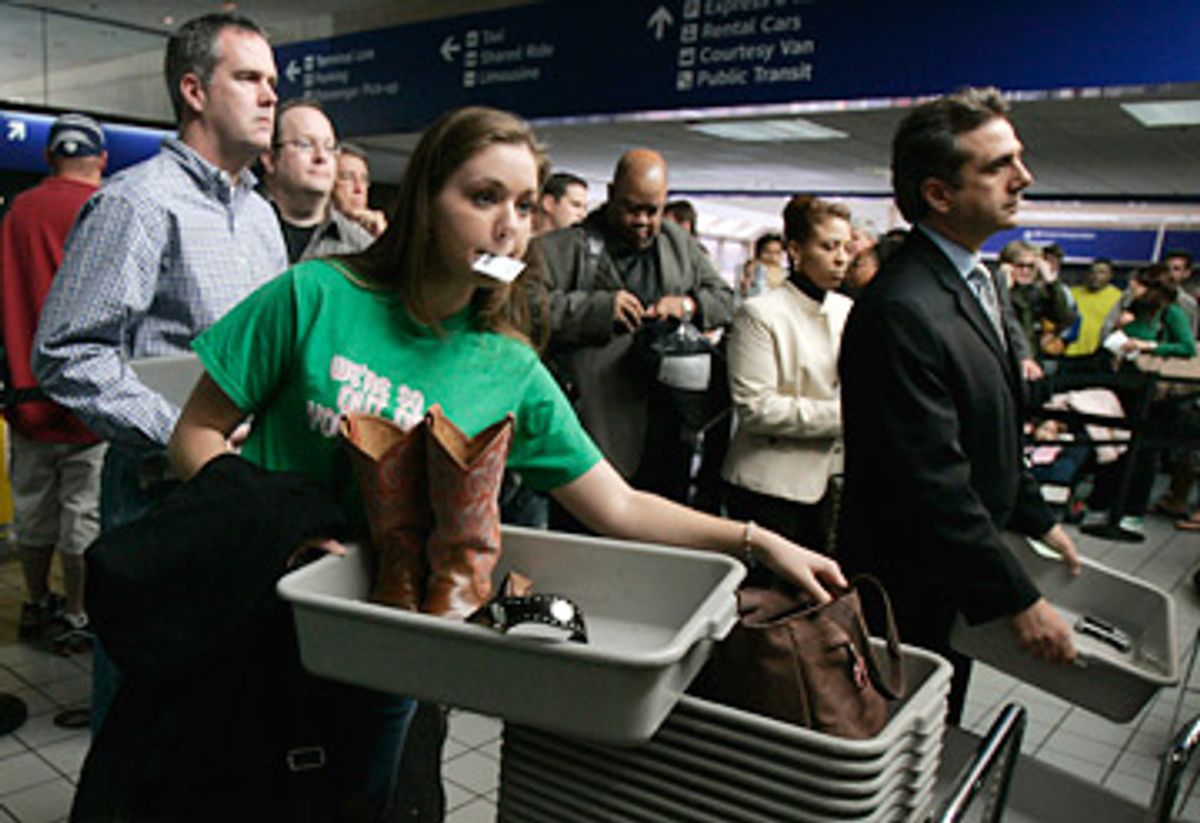 I've just brought in a flight from overseas. I'm wearing my full uniform, and have all of my gear with me. The plan is to run upstairs and leave my flight bag in the crew room before catching my commuter flight home.

Unfortunately, this means having to endure "arrival screening," one of airport security's most irritating protocols. After clearing customs, passengers and crew alike face the X-ray line and metal detector before they're allowed back into the concourse.

This inconvenient rule is in place because of another inconvenient rule, the one that makes connecting passengers claim and recheck their luggage when arriving from places outside the United States -- even though their bags have already been screened at the point of departure. The thinking is that people could unpack this or that dangerous item from a checked suitcase -- a 4-ounce bottle of shampoo, say -- then carry it onto the next flight.

So, together with a throng of exhausted passengers, most of whom are rushing to catch connections, I'm funneled into the grimy, dimly lit checkpoint. I hoist my luggage -- my black flight case, my backpack and a roll-aboard suitcase -- onto the X-ray belt, then pass through the metal detector. Once on the other side, I'm waiting for my stuff to reappear when suddenly the belt comes to a stop. "Bag check!" shouts the guard behind the monitor.

The bag she's talking about turns out to be my roll-aboard. A second guard, a mean-looking woman whose girth is exceeded only by the weight of the chip on her shoulder, comes over and yanks it from the machine.

"Is this yours?" she wants to know.

"A knife," she barks. "Some silverware."

Indeed I do. Indeed I always do. Inside my roll-aboard I carry a spare set of airline-issue cutlery -- a spoon, a fork and a knife. Along with packets of noodles and other small snacks, this is part of my hotel survival kit, useful in the event of short layovers or other situations when food isn't available. Borrowed from my collection of airline silverware (some of us really have such things), it's the exact cutlery that accompanies your meal on a long-haul flight. The pieces are stainless steel, about 5 inches long. The knife has a rounded end and a short row of teeth -- I would call them "serrations," but that's too strong a word. For all intents and purposes, it's a miniature butter knife.

She seems to ignore me, then clumsily unzips the main compartment of the suitcase and begins rifling violently through my things.

"I know what I'm looking for."

"But if you're looking for the knife, it's not in there. I told you, it's in the side pocket."

I pause for a second, allowing a small, potentially explosive nugget of annoyance to fizzle out before proceeding. Then I show her the correct zipper. "In here."

She opens the compartment and takes out a small vinyl case containing the three pieces. After removing the knife, she holds it upward with two fingers and stares at me coldly. Her pose is like that of an angry schoolteacher about to berate a child for bringing some forbidden object to class.

"You ain't takin' this through," she says. "No knives. You can't bring a knife through here."

"Sorry." She throws it into a bin and starts to walk away.

"Don't matter what it is. You can't bring knives through here."

"Ma'am, that's an airline knife. It's the knife they give you on the plane."

"No knives. Have a good afternoon, sir."

"You can't be serious. This is the craziest thing I've ever heard of. Besides, I carry that knife with me all the time."

With that, she grabs the knife out of the bin and walks over to one of her colleagues, a portly fellow with a mustache seated at the end of the checkpoint in a folding chair. I follow her over.

"This guy wants to bring this through."

The man in the chair looks up lazily. "Is it serrated?" he asks.

She hands it to him. He looks at it quickly, then addresses me.

"It's serrated." He is talking about the little row of teeth along the edge. Truth be told, the knife in question, which I've had for years, is actually smaller and less sharp than the knives currently handed out by my airline to its first- and business-class customers. You'd be hard-pressed to cut a slice of toast with it.

"What do you call these?" He runs his finger along the minuscule serrations.

"No serrated knives. You can't take this."

"But sir, how can it not be allowed when it's the same knife they give you on the plane!"

"Those are the rules."

"That's impossible. Can I please speak to a supervisor?"

"I am the supervisor."

There are those moments in life when time stands still and the air around you seems to solidify. You stand there in an amber of absurdity, waiting for the crowd to burst out laughing and the "Candid Camera" guy to appear from around the corner.

Except the supervisor is dead serious.

Realizing that I'm not getting my knife back, I try for the consolation prize, which is getting the man to admit, if nothing else, that the rule makes no sense. "Come on," I argue. "The purpose of confiscating knives is to keep people from bringing them onto planes, right? But every person on my flight was legally handed one of these knives with their meals. How can you ... I mean ... it just ... At least admit to me that it's a dumb rule."

And so on, until he asks me to leave.

Now, do I really need to point out that an airline pilot at the controls would hardly need a butter knife if he or she desired to inflict damage? As I've argued in the column before, the requirement that crew members be subject to the same screening as passengers is wasteful and pretty much pointless in the first place, especially when you consider that thousands of other workers with access to planes, including fuelers, caterers and cabin cleaners, receive only occasional random checks. But the idea of seizing a piece of standard airline cutlery from a uniformed pilot is lunacy.

At this point, the Transportation Security Administration's policies in general are wrong on so many levels that it's hard to get one's arms around them. My apologies to those who've tired of my harping on this subject in column after column, but here again are the bullet points:

I can't disagree that some level of screening will always be important. Explosives and firearms, for instance, need to be kept off airplanes. But the existing rules are so heavy-handed, absolute and illogical as to be ultimately unenforceable.

You would think, nearly seven years after the terror attacks of Sept. 11, that TSA would have gotten its act together. Not just tactically, but functionally. Take a look at the typical checkpoint. There are people yelling, bags falling, trash bins overflowing with water bottles. There's nowhere to stand, nowhere to move. It's a jury-rigged circus.

But we should hardly be surprised, perhaps, at the Frankenstein monster now before us. Propped up by a culture of fear, TSA has become a bureaucracy with too much power and little accountability. It almost makes you wonder if the Department of Homeland Security made a conscious decision to present bureaucratic incompetence and arrogance as the public face of TSA, hoping that people would then raise enough of a fuss that it could be turned over to the likes of Halliburton. (Funny, how despite this administration's eagerness to outsource anything and everything, it's kept its governmental talons wrapped snugly around TSA.)

Except there is no fuss. Serious protest has been all but nil. The airlines, biggest losers in all of this, remain strangely quiet. More and more people are choosing not to fly, and checkpoint hassles are one of the reasons. Yet the industry appears to have little concern while an out-of-control agency delays and aggravates its customers.

And it's going to get worse, not better. As I'm sure you've heard, TSA is deploying body scanners that can see through clothing. It is also implementing gate-side luggage checks similar to those that were common in the days following Sept. 11. After proceeding through the main screening checkpoint, selected passengers will be enjoying a second one just before boarding.

To scare away complainers, TSA is also deploying signs at airports around the country. "Interfering with security personnel or procedures in any manner," the signs read, "is prohibited."

That "in any manner" bit is an eyebrow raiser. Does that include questioning or challenging TSA's methods? Are guards not answerable to those they're supposedly protecting, and who are paying their salaries? How about a sign that cuts to the chase: "Don't question us, just do as you're told."

And what does "prohibited" mean, exactly? What sort of a threat is that? We ask because although it does not have law enforcement powers, TSA has begun issuing navy-blue uniforms and silver, cop-style badges. Not by accident, the badges look exactly like the kind worn by actual police officers. They say "U.S. Officer" at the top, with an eagle emblem in the center and "Transportation Security Administration" across the bottom. Not all law enforcement officials are happy.

The agency will tell you this is a way of enhancing the TSA's image, but in reality it's a method of coercion. Speaking in a USA Today article, TSA spokeswoman Ellen Howe said, "Some of our officers aren't respected." It's not often that I laugh out loud while reading the newspaper, but that one had me going. You don't say.

In the same article, a screener at Boston's Logan International said of the new badges and shirts, "It'll go a long way to enhance the respect of this workforce."

No, sorry, that's not it. You don't bully and fool people into respecting you. If TSA wants respect, it can start with a radical overhaul of its policies, replacing the rules we have with ones that are sensible and effective.


Do you have questions for Salon's aviation expert? Contact Patrick Smith through his Web site and look for answers in a future column.