Jesse Helms is not dead

His politics and his methods live on -- among liberals as well as conservatives. 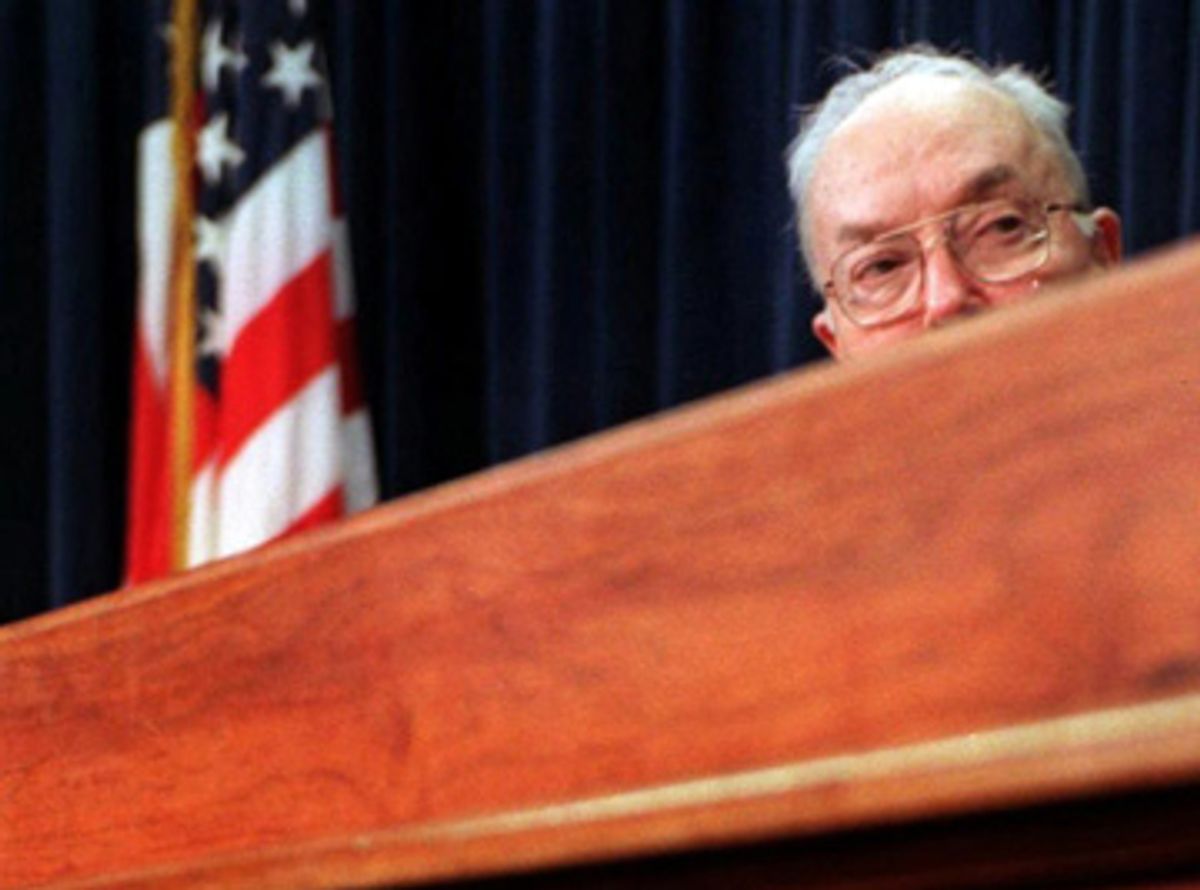 Having devoted his career to shocking and outraging American liberals, the late North Carolina Sen. Jesse Helms continues to provoke them from his grave. Progressive journals and blogs are full of Helms horror stories. How he tried to make Illinois Sen. Carol Moseley Braun cry by singing "Dixie" in the Senate elevator. How he won reelection against a black opponent by means of an ad showing the hands of a white man who had allegedly lost a job because of affirmative action. How he never repented of his segregationist past, unlike Strom Thurmond and George Wallace.

All quite true, quite horrifying and quite edifying. As a politician Helms was, by my lights, a monster. But even Grendel had a mother. It's worth taking a break from the horror stories to ponder where Jesse Helms came from -- and to wonder, with a renewed frisson of horror, whether that might be where we are headed.

Where Jesse Helms came from was the Third World, the American South between World War I and the civil rights revolution. In the generation before Helms was born the son of a police chief in 1921, the Southern oligarchy had been terrified by Populism. The greatest threat to the white elite was the revolt of white workers and farmers. To forestall that possibility, the Southern state governments, in the decade before World War I, used literacy tests, poll taxes and other measures to eliminate not only all blacks but half of the white Southern population from the electorate. In the election of 1936, voter turnout in Georgia was 16.1 percent, 13 percent in Mississippi, and only 10.7 percent in South Carolina. (It was higher, 42.7 percent, in Helms' North Carolina, where populists had abolished the poll tax.)

Having crushed the Republican and Populist parties, the oligarchs imposed a one-party dictatorship on the region, with secret state surveillance units and occasional collaboration between the police and the Ku Klux Klan. In its economy, the South was a banana republic, a commodity-exporting resource colony in which a "comprador bourgeoisie" of local landowners and local businessmen collaborated with investors in New York and elsewhere in fleecing the region.

To serve their interests, the old latifundist families and corporate elites hired "Dixie demagogues," who were to genuine populists like William Jennings Bryan what a Disney pirate is to a pirate. All of them were entertaining. Some began as entertainers, like musician-slash-flour miller W. Lee "Pass the Biscuits, Pappy" O'Daniel, who went from hosting the "Hillbilly Flour" radio show to the Texas governor's mansion in 1939. The "Dixie demagogues" denounced various supposed enemies of the white tribe, but with two exceptions -- Huey Long and George Wallace -- they never threatened the rule of the country clubs and courthouse gangs. Jesse Helms was one of these theatrical quasi-populists, an uncomplicated establishment conservative who parlayed a liberal-baiting radio show into a political career. Like other faux-homespun Southern conservatives, he employed rhetorical populism against blacks, homosexuals, liberals, professors, modern artists and "common-ists" in the service of his business backers, most noticeably North Carolina's tobacco industry.

All of this would be of interest to regional historians only, if the South hadn't taken over the Republican Party and if the Republican Party hadn't taken over the United States in the last third of the 20th century. Jesse Helms was an architect of both takeovers. When this Dixie Democrat switched to the Republican Party, he was followed by thousands of others, so that by the end of the 20th century the former Confederacy was the most Republican part of the Union. Helms is also given credit for saving Ronald Reagan's career by helping him win the North Carolina primary and then the Republican nomination for president in 1980. If, as historian Sean Wilentz argues, this is, or until recently was, the Age of Reagan, then it was also in no small part the Age of Helms.

Anyone observing the American political scene in 1955, when William F. Buckley Jr. founded National Review, would have assumed that the future of the right lay with Taft Republicans rather than with the peculiar far-right Democrats of the Deep South. Why did the Jesse Helms right defeat the Bob Taft right and define American conservatism in the last half-century?

For an answer, I think, we have to look beyond tactics like Richard Nixon's opportunistic Southern strategy to the deep structure of modern American politics, which is defined by the toxic interaction of weak political parties with media and money. Evolutionary biologists speak of "exaptation" -- the use of an organ that evolved for one purpose for another purpose in a new environment. Wings, for example, might have developed on feathered dinosaurs for purposes of sexual display before they were used for flight.

The faux-populist corporate conservatism that evolved in the South between the world wars was "exapted" in this sense to flourish in a national politics of weak parties, big media and big money. Helms, like other ideological conservatives, rose to power outside the ranks of the Republican Party machine, with its Elmer Fuddish Northeastern and Midwestern stalwarts like Bob Michel. Helms' career illustrated the confluence of media and money. He began, as we have seen, as a right-wing radio announcer, a proto-Limbaugh. And throughout his career, and now posthumously, he was the beneficiary of free media. Whether he was denouncing Martin Luther King Jr. or Robert Mapplethorpe, Helms knew exactly how to shock the mostly liberal media into showering him with publicity he didn't have to pay for.

In the new political environment created by television, Dixie politicians -- not only faux-populist conservatives like Jesse Helms but also genuine populists like Mike Huckabee and populist liberals like Jimmy Carter and Bill Clinton -- have flourished, while the products of more staid regional cultures, like Dukakis and Dole and Kerry, have floundered. (It is painful to watch John McCain, who despite his Southern ancestry is a right-wing Progressive in the mold of Theodore Roosevelt, pandering to the Southern right; it is like watching Woodrow Wilson pretend to be William Jennings Bryan.)

The other pillar of modern politics, besides media, is money. Helms' National Congressional Club, founded in 1972, became one of the largest political action committees in the United States by the 1980s. That money went, in turn, into the media, buying radio ads and TV ads, like the famous "white hands" ad, which played on white resentment of race-based affirmative action.

Now that Helms is in his grave, is the Age of Helms over? Don't be so sure. His influence has been so pervasive that even liberals and Democrats are doing his bidding, albeit unwittingly.

At this very moment, reactionary Southern economics is being recycled as progressive anti-racism. The Republican ranks are split between corporate types who like the cheap, nonwhite labor afforded by mass Latin American immigration and the nativists who loathe it. Ironically, the politics of racial resentment that the GOP elite exploited so skillfully would be cutting off the flow of unskilled workers -- were it not for Democratic politicians, attuned to a burgeoning Latino electorate. Jimmy Carter's Hesburgh Commission in 1980 and Bill Clinton's Jordan Commission in 1996 both recommended strict enforcement measures to stop illegal immigration and deep cuts in unskilled legal immigration, to help create a tight labor market and higher wages for low-wage workers. In 2006, however, most Democrats teamed up with the Chamber of Commerce to support a "comprehensive immigration" bill that included an entirely new mass "guest-worker program" of the kind that Phil Gramm and other Southern reactionaries had sought for years on behalf of sweatshop industries and agribusiness.

Meanwhile, hikes in the minimum wage have failed to keep pace with inflation and, thanks to government and employer hostility, private-sector unions have weakened, with little effective push back from progressives. Labor and class issues have become less important to an increasingly affluent, educated and professional Democratic base. The result is a Southern-fried cheap labor economy without the Swedish welfare state subsidies that are supposed to make it tolerable.

It gets worse. A case can be made that Helms the radio showman and other conservative media demagogues pioneered the ascendant style of liberal discourse. In the last decade, Democratic donors and activists, pondering the success of the Southernized right, decided that what the liberal left needs is not a new message but better messengers -- which meant an often conscious attempt to replicate the successful institutions of the right. And so we get someone like Keith Olbermann, who may admire Edward R. Murrow but whose hectoring owes more than we'd like to admit to Limbaugh, and therefore Helms.

So much for media. Money? Progressives denounced big money in politics as plutocracy, until they discovered they could raise more than conservatives. All the talk of "small donors" aside, most liberal money comes from affluent people. MoveOn.org and other soft-money organizations, whether they like it or not, are the children of Jesse Helms' Congressional Club.

"You have to fight fire with fire." Perhaps. My point is that, by adopting Helms' methods of media demagogy and fundraising, progressives tend to ratify the structure of Helmsian America.

So here's the real horror story. In every respect except white supremacy, contemporary America looks more and more like the South between the world wars that Jesse Helms wanted to preserve. We have growing inequality and concentration of wealth, and an elite economic strategy like that of the traditional South that focuses on importing cheap labor, outsourcing manufacturing and exporting commodities (we supply industrial Asia with timber and soybeans). Private-sector unions are all but dead, as in the South. The political parties, as organizations, are weak, as in the South. More and more elected officials are self-funded millionaires or billionaires. Contemporary American politics, like Southern politics past and present, pits elite business-class conservatives against feeble, housebroken elite progressives who are not real threats to entrenched privilege. When, inevitably, the occasional populist protest figure like Perot, Dobbs or Huckabee appears, the affluent progressives quickly close ranks with the corporate conservatives.

Jesse Helms is dead -- but his sinister influence lives on. If you seek his monument, look around.