The dangerous hostility game with Iran

With negotiation starting to work, Bush administration hawks promote an atmosphere of crisis -- and the risk of actual conflict grows. 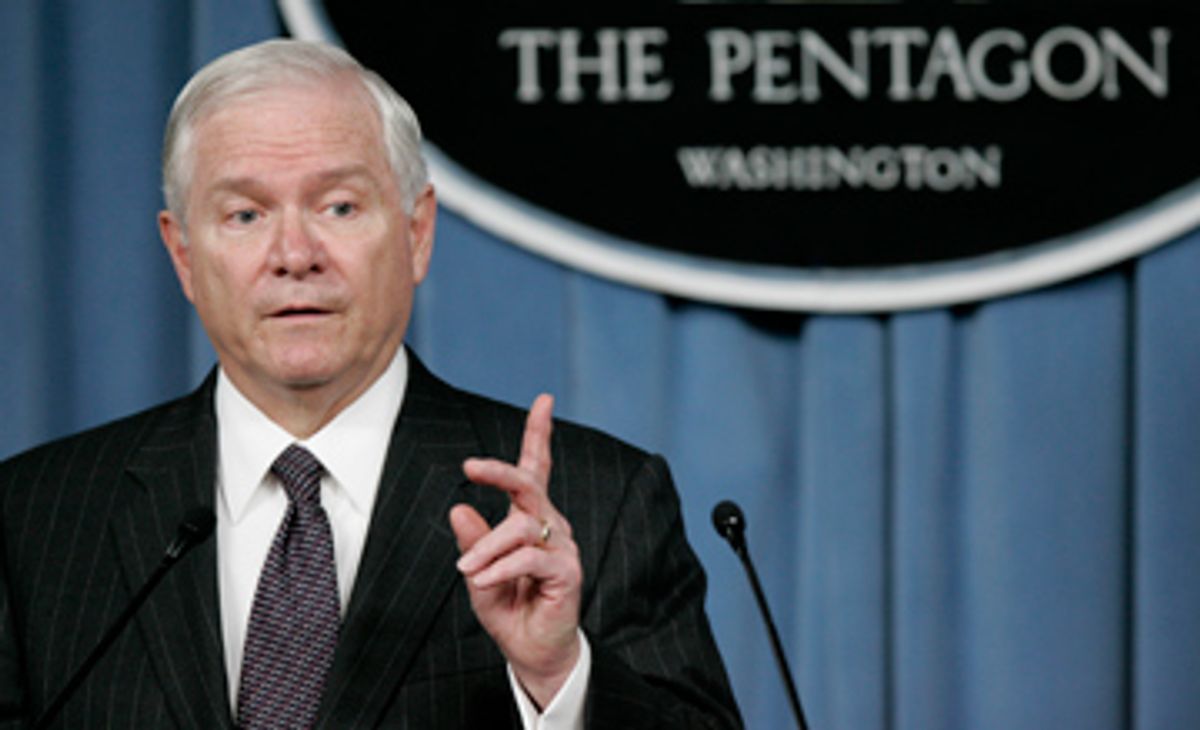 Pressure for a military strike against Iran appears to be growing dangerously -- a prospect with untold but certainly dire consequences for American troops in Iraq, a broader conflagration in the Persian Gulf and an oil price spike that could cripple the world economy. Repeated promises by the Bush administration to seek diplomatic solutions to disagreements with the Iranian regime haven't quenched rising hysteria in the United States and Israel. Perhaps that is because the sound of White House vows to use force only as a "last resort" evokes bad memories.

If Washington and Jerusalem are moving toward a military confrontation with Tehran, as many media reports have suggested in recent days, the question is why now. Delving beneath the alarming editorials and headlines about the alleged threat from Iran, parroted by politicians in both parties, it is plain that the actual threat is shrinking slightly, while the opportunity for negotiation is improving.

Consider, for instance, the supposedly startling news that the Iraqis want the United States to agree to a timetable for withdrawal of American troops as the price of any continuing agreement between the two governments. As anyone who has paid attention to Iraqi public opinion understands, it is utterly unsurprising that an elected government would eventually reflect what has been the overwhelming sentiment in that country for years.

Why would Iraqi government officials be sufficiently confident to express their people's wish for true sovereignty now? Official sources and mainstream American media emphasize the growing competence of the Iraqi armed forces, although American generals always stress that such progress is fragile and tentative -- and that to sustain those gains, the U.S. will be required to maintain a substantial military presence for years to come.

In fact the most plausible explanation for Prime Minister Nouri al-Maliki's sudden outspokenness, which was echoed by his national security advisor and other Iraqi officials, much to the embarrassment of the White House, is not his army's strength but his government's relationship with Iran. Clearly the Iranians have been using their influence on events inside Iraq to encourage calm. The flow of weapons over the border (or at least their use against U.S. troops) has virtually halted, and the level of fighting among Shiite factions has likewise diminished. Neither of those trends could have taken hold without Iranian assent.

With levels of violence decreasing, the Iraqi government's call for a scheduled American withdrawal is much harder to resist. It is no mere coincidence that the shift in Iraqi policy mirrors the Iranian position urging a swift end to the U.S. occupation.

It is also not an accident that these developments in Iraq have occurred at a moment when the Iranian mullahs again seem more receptive to negotiations over their nuclear program. Last week the Iranians responded positively to European Union proposals, backed by the United States, Russia and China, that would revive dormant negotiations and forestall stricter economic sanctions. After receiving a new offer from E.U. Foreign Minister Javier Solana, the chief Iranian negotiator promised to respond shortly.

Even as Iran fired ballistic missiles over the Gulf, its officials insisted that the tests were strictly defensive and intended to answer recent Israeli exercises aimed at them. Those tests didn't turn out very well, anyway, as the amateurishly doctored photographs of the launch later proved.

Yet the menace of war remains ominously real.

Obviously the war lobby within the Republican Party and the Bush White House has lost neither influence nor determination, no matter how wrong its predictions nor how disastrous its policies have proved to be. When John McCain jokes that exporting cigarettes to Iran might be a "way of killing them," he isn't really kidding. Like his warbling of "Bomb bomb Iran" last year, that moronic remark represented a profound judgment that war is the only way to achieve American objectives in the Gulf region.

The problem faced by McCain, Vice President Dick Cheney and their fellow hawks in Washington and Jerusalem is that their reign of error may well be coming to an end -- and that Barack Obama as president may be far more inclined to talk than bomb. The final months of the Bush administration are counting down, while its preferred successor McCain is achieving little electoral traction as his campaign founders. Meanwhile in Israel, the government of Ehud Olmert is sinking under charges of political corruption and military incompetence.

While the hawks in both countries worry that the window for war will close over the next few months, they may also regard this period as their final chance to use war -- or at least the threat of war -- to bolster their waning political power. Under the tutelage of Karl Rove, that gambit worked wonders for the Republican Party in the 2002 midterm elections, as the drive to war with Iraq commenced.

The hawks don't have to drop bombs to achieve the "rally effect." But as they promote an atmosphere of crisis, they will drive us closer to actual conflict -- and to the possibility that a spark of confrontation will ignite war, with fearsome consequences that can be imagined but not foreseen.