"Journey to the Center of the Earth"

Put on those gimmicky glasses. This old-fashioned adventure will wow you with the possibilities of modern 3-D. 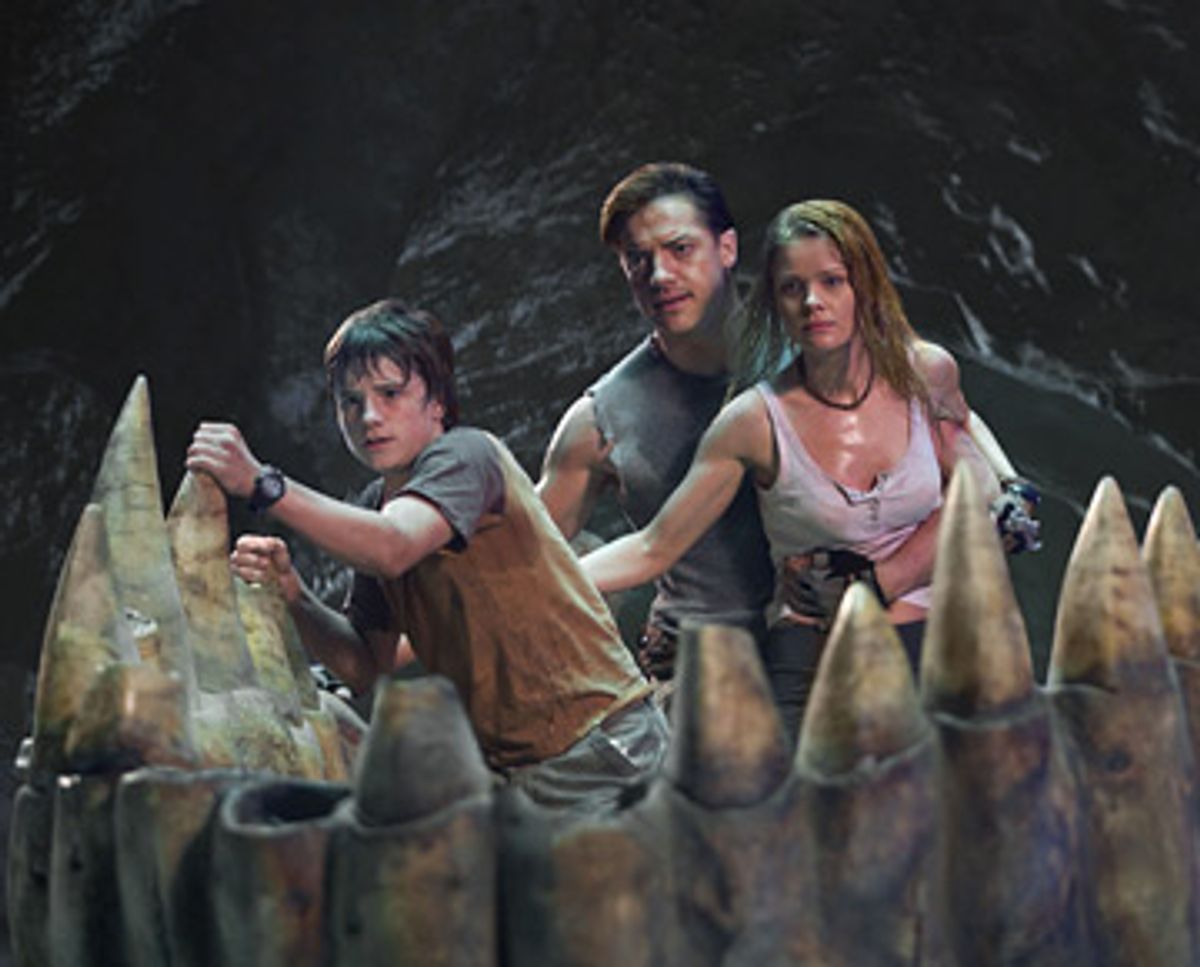 Duck lovers will be relieved to know that the 3-D adventure "Journey to the Center of the Earth" is not a remake of the 1959 picture starring Pat Boone and James Mason, in which Gertrude the duck meets an unfortunate end. There is no Gertrude in this "Journey," which makes no attempt to be an adaptation of the Jules Verne novel, anyway. But the movie, directed by visual-effects pro Eric Brevig (whose credits include pictures like "Men in Black" and "Pearl Harbor") does acknowledge where the idea came from in the first place: The story makes reference to "Vernians," obsessive types who believe that Verne's work is filled with secret codes and clues that can lead them to wondrous real-life discoveries. This is a movie that's faithful to an idea, and to a sense of adventure, more than to a specific work.

It's equally faithful to a somewhat old-fashioned movie novelty, 3-D, which is for some reason being touted as the future of movies, even though putting on the special black-rimmed glasses essential to watching the thing made me feel I ought to be wearing a twin set and crinoline. But "Journey to the Center of the Earth" works because it's wholly in love with the nostalgic nature of its gimmick -- even though the technology it uses has come a long way since André de Toth (who, ironically, had only one eye) wowed audiences in 1953 with that infamous coming-right-at-ya paddle-ball effect in "House of Wax." Brevig, working from an admirably uncomplicated script (by Michael D. Weiss, Jennifer Flackett and Ed Levin), digs in and makes nifty use of the possibilities offered by modern 3-D. The first shot is an extreme close-up of an ugly bug, whose antennae -- doink! -- reach straight out at us from the screen. Talk about engaging your audience.

The plot is extremely simple, really just a spare framework on which to hang the effects: Brendan Fraser plays Trevor Anderson, a likably scatterbrained scientist who treks to Iceland with his nephew, Sean (Josh Hutcherson), in search of a mysterious world beneath the earth's surface. Trevor's brother -- and Sean's father -- died in search of that world. Now, Trevor and Sean have reason to think they can succeed where others before them have failed. With the help of a plucky (and extremely pretty, natch) Icelandic guide, Hannah (Anita Briem), they embark on their adventure, rappelling down the sides of long, steep holes, zooming through dark tunnels on abandoned mining cars that serve as improvised roller coasters, and being blown out of geyser holes. What else would you expect from self-respecting characters in a 3-D movie?

The picture works because Brevig and his actors -- not to mention his effects -- maintain a sense of humor and lightness. It doesn't hurt that Fraser, a fine actor who's made a name for himself not with his serious performances (which are reliably solid) but for his recurring role in the "Mummy" series -- the next installment of which opens in a few weeks -- has such terrific comic timing that he makes even the simplest, most straightforward jokes work. There are also whole sections of the picture that can be conveniently filed under the category "Things Kids Like": These include dripping gobs of goo, a school of pretty scary flying fish whose snapping jaws are lined with treacherous, pointy teeth and, of course, dinosaurs. Our explorers also encounter a number of marvelous creatures, most noteworthy a flock of phosphorescent birds that flutter right at us, the subtle rush of their wings sounding as elemental as a heartbeat.