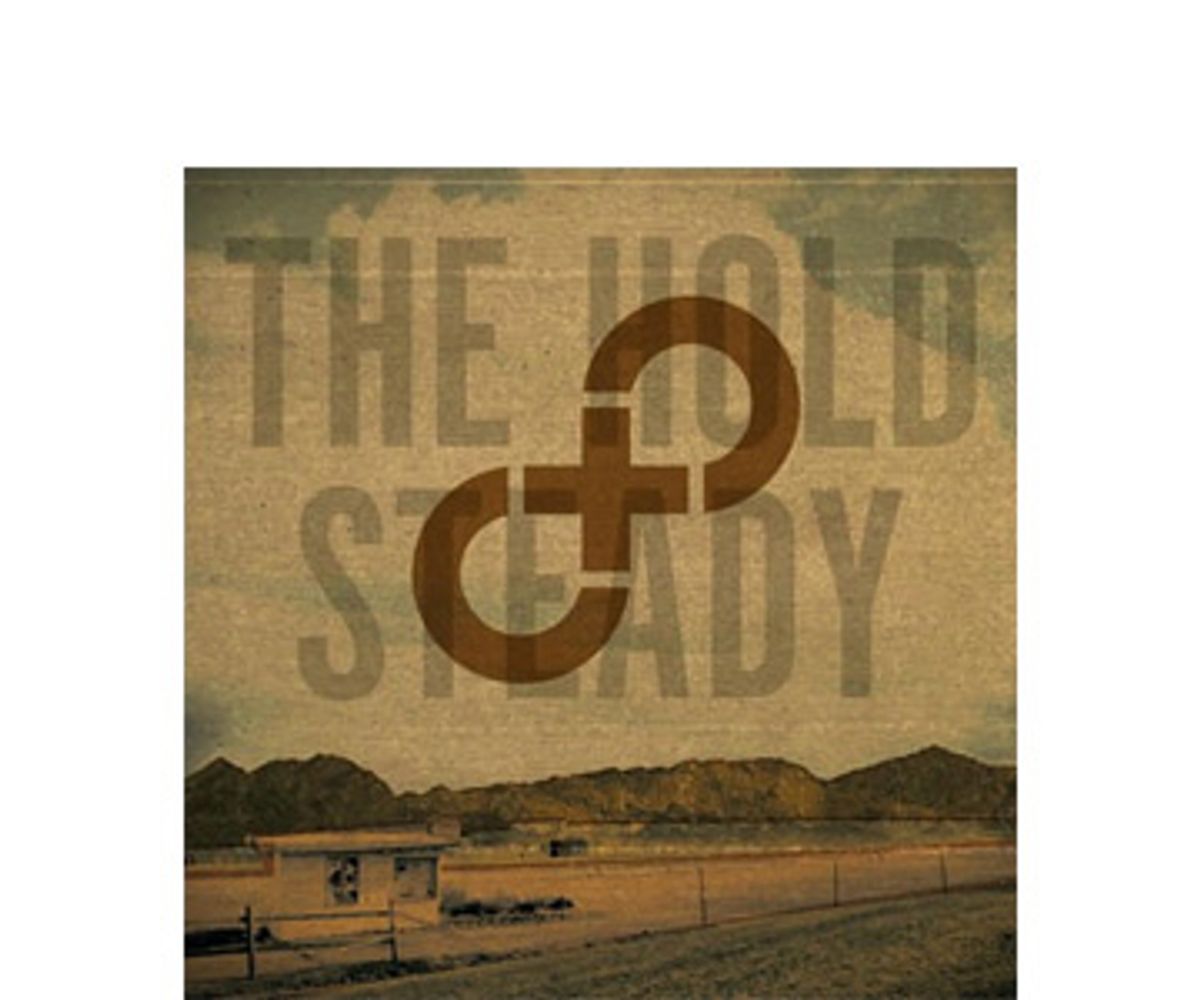 Indie rock is full of annoying voices. Hell, indie rock was founded on annoying voices, from the low, talky Lou Reed of the Velvet Underground, to the grating likes of the New York Dolls' David Johansen and the Sex Pistols' Johnny Rotten, all the way down to Coldplay's whiny Chris Martin and the screechier works of Conor Oberst (aka Bright Eyes).

But standing out even in this company is Craig Finn, the lead singer, lyricist and rhythm guitarist in Brooklyn, N.Y., five-piece the Hold Steady. That's partly because Finn's voice is both nasal and chesty, a whiny bellow that at times seems like it isn't aiming for any notes in particular. (Matador Records co-founder Gerard Cosloy once memorably described Finn and his group as "later-period Soul Asylum fronted by Charles Nelson Reilly.") Still, you can hear on the Hold Steady's new "Stay Positive" that Finn's voice has mellowed with age (he's now 37) and singing lessons. If anything, though, Finn's lyrics -- hyper-detailed, highly allusive, fictional stories about teenage runaways, low-level criminals, copious substance abuse, and the more amusingly desperate edges of the rock lifestyle -- are enhanced by his nasal bark.

The Hold Steady identify as an indie band primarily because they're on Vagrant Records (and before that, the Brooklyn label Frenchkiss). But what they play is closer to '70s AOR -- souped-up and punk-inclusive, but still defined by Tad Kubler's splashy, muscular guitar leads and Franz Nicolay's oft-romantic keyboards; bassist Galen Polivka and drummer Bobby Drake form a tough, nimble rhythm section. Bruce Springsteen's E Street Band is the Hold Steady's most obvious and direct predecessor (and Bruce loves 'em back), but others, like Cheap Trick and Boston, are also in clear sonic evidence. And if the Hold Steady evoke the great mid-American summer road trip, Finn's voice and lyrics expose its dark underbelly.

Finn's music has long offered a kind of trade-off: Stick around even if you think you can't stand his glottal bark, because eventually you will be sucked all the way in. Finn has repeatedly told interviewers his favorite fan correspondence is e-mail from dudes around 40 who lost interest in new music a decade or more ago but plan to get stupid drunk and shout along with every word the next time the Hold Steady come to town.

People hear their lives in this band, just the way Finn heard his in his favorite groups growing up. Finn told me in a 2003 interview, "In hardcore circles, there's a T-shirt that says 'Straightedge Till Death.' And there's another one that says 'Straightedge Till Prom,' because most of the people in hardcore are still underage. So I think of [what I write] as post-prom straightedge songs." Finn's musical roots in hardcore are especially pronounced on "Stay Positive," the Hold Steady's latest album -- especially the title track and the album's opener, "Constructive Summer," in which Finn raises "a toast to Saint Joe Strummer." Alternately spieling like an inspired scoutmaster and the one-time 16-year-old in a basement keeping the hardcore faith, Finn declares, "Let this be my annual reminder/ That we could all be something bigger ... We are our only saviors/ We're gonna build something this summer."

If you go back to Finn and Kubler's previous band, the Minneapolis quartet Lifter Puller, you can start to see what Finn is building. This earlier band was essentially the Hold Steady in embryo, though there are many differences: Kubler played bass, not guitar, and Lifter Puller's sound was wiry art-punk, heavy on needling keyboards, rather than widescreen rock. The band was the hub of a thriving arts and music community in late-'90s Minneapolis, scene kings that no one cared about outside the scene. Part of their appeal was the way Finn portrayed his hometown: Most of Lifter Puller's songs were set there and turned a mostly humdrum city into one crawling with vice, mischief, drugs and action -- a squalid, alluring, David Lynchian vision lurking beneath the bland surfaces. Finn's narrators were the excitable guys insisting they knew where the real action was, and he frequently played their haplessness for laughs. "Fiestas + Fiascos," Lifter Puller's 2000 swan song, includes one character yelping, "Woke up in the grass with the assless chaps!"

When the band dissolved in late 2000, Finn and Kubler both made their way to Brooklyn; the Hold Steady began playing in early 2003. Originally a quartet, the Hold Steady deliberately stayed away from the new wave keyboards, brisk tempos, condensed structures and lack of choruses that had characterized Lifter Puller. On "The Hold Steady Almost Killed Me," the band's 2004 debut, Finn still set many of his songs in the Twin Cities, but he sounded more amused than bug-eyed, sloshing alongside the ridiculous characters and lost dingbats he was now chronicling, while Kubler set out to re-create the guitar leads from his melted classic-rock car tapes -- right enough to catch their essence, wrong enough not to get sued.

Having watched his prior group become a posthumous cult favorite thanks to the Internet, Finn was trying to make something happen. His timing was flawless. When the Hold Steady first appeared, indie rock was the hottest thing going in New York, with the Strokes, Yeah Yeah Yeahs, Interpol and a dozen other bands stirring up excitement even among jaded locals. It was an exciting time for live music in New York; the scene was also very arty and trendy, and as a recently transplanted Midwesterner, those fashiony trappings made Finn bristle. Like a lot of Midwesterners who move east (I speak from experience), Finn began sticking to his traditionalist guns in a way he hadn't at home -- partly ironically, partly out of defensiveness. Take this lyric from "Hostile, Mass.," on "Almost Killed Me": "He said, 'My name's Corey and I'm really into hardcore/ People call me 'Hard Corey.'" Sure, cute -- but then Finn throws in the twist: "Don't you hate these clever people and these clever-people parties?" The Strokes spoke to the nonchalantly chic; the Hold Steady spoke for the ex-pats waiting to finish doing their city time and head back to their hometowns. They became the New York rock band for people who hated New York rock bands.

If in Lifter Puller Finn had his tongue at least slightly in cheek when singing about subcultures, in the Hold Steady he began to openly value community -- which in turn attracted an audience that was looking for something recognizable with which to connect. Finn's lyrics were still furiously paced, but with Kubler frequently taking solos you could let the details sink in. And the storytelling style itself was relaxing as well: less brash trash talk, more character study. 2005's "Separation Sunday" brought to center stage yet another obsession that had occasionally bobbed up in Finn's work before: Catholic guilt. That album is a loosely plotted suite about a lapsed Catholic girl, Holly (short for Hallelujah), who goes on a sex-drugs-resurrection road trip. "Boys and Girls in America," from 2006, was baldly romantic and occasionally just wet, with acoustic instruments increasingly prominent. But its discrete songs and Finn's more melodic approach help put them over to a larger audience -- the kind you get from constant touring. It's hard to think of the Hold Steady as a New York band now: They've become festival-happy road dogs who frequently sport beards.

"Stay Positive" is a natural progression -- backward and forward. Nothing rhythmically fancy goes on in Hold Steady songs, but their beat hurtles, and Kubler and Nicolay both have a gift for instrumental fills that complement the onslaught of words. While there are a lot of new touches, particularly the brazenly plastic synthesizers of "Navy Sheets" and a handsome array of acoustic instruments on several songs, most of the time they just play basic rock. But they do it well enough that it can feel like you haven't heard its like in years. No new ground is broken; none needs be.

Still, for all of the vigor of the up-tempo rock songs that dominate, "Stay Positive" is clearly the work of a bunch of guys who are nearing 40 and thinking about what that means. The harder edges of the music seem not so much hemmed in as blurry from use. But musically the Hold Steady are starting to look back too, beyond the hardcore references. The "Navy Sheets" synth line is a clear hat-tip to the Lifter Puller sound. You can always tell a band is "maturing" when the cellos come out, but here the banjo (played by J. Mascis of Dinosaur Jr. on "Both Crosses"), squeezebox ("Lord, I'm Discouraged") and harpsichord ("One for the Cutters") add new shades to the well-established sound.

The main thing, though, is the way Finn connects back to his earlier work. He's repeated lines from, or referring to, older songs as a matter of course, but on "Stay Positive," there's a sense of finality when he brings up old characters again. Maybe that's Finn's voice, more casually weary than ever, but it's also logical. That's why this album's center feels less like its explicitly punk roots than magisterial ballads like "Lord, I'm Discouraged" and "Both Crosses." Both songs wrestle with Catholicism again, and Finn begins another song, "Yeah Sapphire," "If I cross myself when I come would you maybe receive me?" (Bet that works great with the ladies.)

What connects everything is that for all the drugged-out messes he chronicles, Finn is about as far from a nihilist as rock has. What he'll never expunge from the church is the same thing he can never forget from all those basement shows as a kid: the sense that you can make yourself more powerful by giving in to the collective. He isn't trying to be anybody's savior. He just wants to spread the word.