The blogosphere's reaction to the New Yorker cover proves that the Bush era has killed a lot of liberals' sense of humor. And that's not funny. 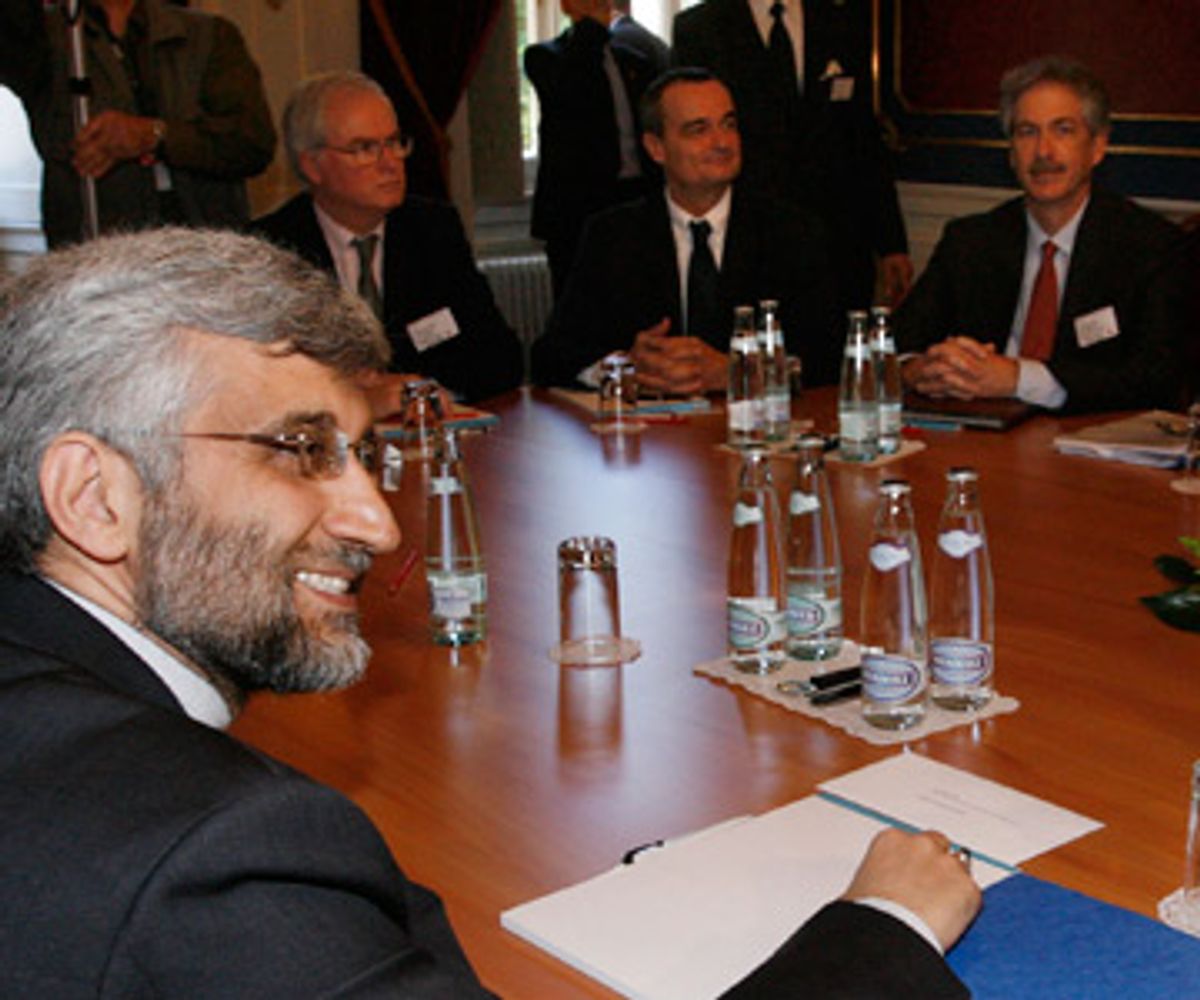 It's official: The Bush era has made liberals so terrified of right-wing smears it has caused them to completely lose their sense of humor.

Much as I hate to repeat one of Rush Limbaugh's flat, stale and unprofitable applause lines, that's the only conclusion I can draw after witnessing the left-wing blogosphere's bizarre reaction to the New Yorker cover depicting Barack Obama in the Oval Office as a dishdasha-clad Muslim terrorist, exchanging a "terrorist fist jab" with Michelle Obama, who is dressed like a latter-day Angela Davis with huge 'fro, combat boots, assault rifle and bandolier of bullets -- while Osama bin Laden looks approvingly on from a picture frame and an American flag burns merrily in the presidential fireplace. To judge from the reaction of much of the left, you'd think that New Yorker editor David Remnick had morphed into some kind of hideous hybrid of Roger Ailes and Roland Barthes and was waging an insidious Semiotic War against Obama.

I don't know what lugubrious planet these people are on, but I definitely don't want any of them writing material for Jon Stewart.

After 9/11, some pious nitwits, suffering from an America-centrism akin to the medieval belief that the Earth was the center of the universe, intoned that "irony was dead." Seven years later, they've been proven right -- but not in the way they intended. Irony may have been killed, but not by sincerity -- it's been killed by cynicism. Vast swaths of the left have apparently been so traumatized by the Big Lie techniques employed by the Bush administration, its media lickspittles like Fox News, and the right-wing attack machine that they have come to regard all images or texts that contain negative stereotypes as too politically dangerous to run. If you satirically depict Obama as an Islamist terrorist, in this view, you are only reinforcing and giving broader currency to right-wing smears.

Since the essence of satire is exaggerating negative stereotypes, this means that satire itself is off limits. Or, at least, all satire except that which the cowering -- but oh so semiotically sophisticated -- left-wing commentariat deems to be sufficiently broad-brush and polemical to pass its funny test. There's no arguing taste in humor, of course, but it's hard to escape the conclusion that those who find Barry Blitt's drawing completely unfunny have traded their appreciation of subtlety and nuance for an instrumental, ends-obsessed, political-unto-death worldview. The prominent blogger Atrios, for example, writes of the cartoon, "It obviously was an attempt at satire, but it fails. It represents the basic stuff that you get from the Right about Obama, but it neither mocks nor exaggerates them." Atrios may be reading secret e-mails from Fox News containing Protocols of the Elders of Obama that I haven't seen -- oops, I shouldn't have made a joking reference to that noxious forgery, because by so doing I have played into the hands of anti-Semites -- but I haven't come across any right-wing hits on Obama that feature an American flag burning in the White House fireplace and a portrait of Osama bin Laden on the wall.

The more brain-dead among the posters on left-wing blogs angrily denounce the New Yorker cover as itself racist. Merely to acknowledge racism, for them, is to be racist. This view, which in its Manichaean purity oddly recalls the hysterical reaction of some Muslims to the Danish cartoons depicting the prophet Mohammed, represents the reductio ad absurdum of political correctness: Not a single work of satire could ever pass this paranoid test. With some exceptions (notably the conservative commentator Michelle Bernard on "Hardball"), few of the pundits who criticized the New Yorker went this far: They merely expressed outrage, or concern, that by running the cartoon, the New Yorker was unwittingly carrying the right's water for it.

A couple of points need to be made about this. Yes, the right wing is obviously trying to paint Obama as a Muslim terrorist sympathizer -- it's the only card they have to play. And yes, there are ways that the mainstream media can, and has, "laundered" such scurrilous smears -- Fox News is expert at them. ("Tonight at 8: Is Obama a Muslim fanatic, or merely a white-hating traitor? We report, you decide.") But it should be obvious that there's a fundamental difference between mocking something and laundering it. Some on the left, however, are so terrified that Americans, in their cosmic stupidity, cannot distinguish between satire and smear that they reject satire. After Obama wins, they decree, there will be time for all the sophisticated ha-ha. But right now, imagery must be as tightly controlled as at an exhibition of Stalinist realism paintings. As Ari Fleischer said, we must all watch what we do, watch what we say.

Such reactions are utterly political and deeply skeptical: They're based on the belief that journalism is all about power, that it must cater to the lowest common denominator, and that the critical and ironic thinking satire requires is an outmoded luxury. As Alternet's Don Hazen wrote, "Framing the Obamas in this way completely reinforces the negative and harbored feelings that they are absurdly trying to satirize. This is satire run amuck, and it is a perfect example of how antiquated notions of journalism can play a role in provoking the worst of stereotypes and off-the-wall fantasies."

When I hear expressions like "antiquated notions of journalism" being tossed casually about like this, no matter how good the writer's intentions, I can't help recalling that memorable German line misattributed to Goering: "When I hear the word culture, I reach for my revolver." Those "notions" have been around for a long time, at least since Swift -- is there some reason they have suddenly become inoperative?

In a certain way, the left's reaction is reminiscent of mainstream Democrats' refusal to challenge Bush on Iraq. They, too, were instrumentalists and amateur semioticians, worrying that the GOP would "frame" them, to use linguist George Lakoff's concept, as weaklings and wimps. But they were wrong, just as those who advise the liberal media to deal with the right-wing smear campaign against Obama by refusing to acknowledge it are wrong. In any case, once journalists and artists start censoring themselves because they're afraid their work will play into political attacks or have other unwanted political consequences, they've started down a dark road, one that ends up with party hacks celebrating the latest Fearless Leader. What's the point of electing a progressive president if you lose your soul in the process?

Beyond these considerations, there's something ridiculous about the whole debate. The New Yorker is the most prestigious magazine of its type in the country, with a circulation of over a million and a disproportionate influence, but it's not a network or CNN or Fox. If the New Yorker starts trickling down to supermarket racks in Des Moines, Iowa, as the critics seem to fear, the GOP is toast. The only demographic it's going to swing is between 110th Street and Canal. What next -- riots in the left-wing blogosphere because the New York Review of Books runs a cartoon depicting McCain as Superman?

There is a also glaring lack of consensus among the critics about the very nature of the cartoon. Some find it too bland and safe, while others argue that it's OK for the New Yorker's elite readers but too edgy for the masses. Those who find it toothless seem to do so in large part because it's on the cover of the New Yorker. It's all about context: If the same illustration appeared on the cover of Time, they would "read" it differently because Time lacks the New Yorker's arch, self-satisfied, knowing aura. By this way of thinking, what in Remnick's magazine looks bland (and therefore a deplorable conduit for right-wing stereotypes) would look like David Levine, George Grosz or Sue Coe if it ran on the cover of either a conventional newsmagazine like Time or a more polemical one, like the New Republic, Salon or National Review.

It's true that the eclectic aesthetic universe of New Yorker covers, one better mannered than most magazines and also more open to fine art, places the Obama cartoon in a slightly more ambiguous context, and makes it feel a little more bemused and a little less incendiary. This probably explains why a number of critics, including the Washington Monthly's Kevin Drum, have argued that the cartoon should have explicitly linked the Obama-as-terrorist image to McCain or the GOP. I don't agree that that heavy-handed move would necessarily have improved the cartoon, but it would have pulled the New Yorker off its throne a bit. There's definitely a tension, and not always a harmonious one, between the New Yorker's carefully cultivated august stance and its laudable desire to mix it up and brawl.

But this whole discussion is mostly irrelevant. A satirical drawing is a satirical drawing, regardless of which magazine's cover it runs on. Regardless of the context, one can still "read" Blitt's drawing, and what it says is very clear: These attacks are ridiculous and absurd, and it's OK to laugh at them in any way you want. If you want to smile over sherry in a drawing room, go right ahead.

The magazine's left-wing critics, understandably scared (and perhaps deafened) by the vicious noise of the right-wing attack machine, are demanding that those on the left also turn their amps up to full Spinal Tap 11. Cartoons to be chuckled at over sherry, they say, are not funny and are too dangerous. (What they don't say is that when everything is dangerous, nothing is funny.) Ugly times call for ugly tactics. Noise calls for noise.

As P.G. Wodehouse's Bertie Wooster would say, "What a frightful idea!" I don't like to drink sherry all the time, and I yield to no one in my fondness for Hendrix-like volume and over-the-top polemics. But one satirical New Yorker cover is not going to release the evil demons of the right. And who wants a world without sherry -- or, for that matter, stilettos? Somehow lost in all this is the fact that Blitt's cartoon is actually a sharp object. It's still four months until the election. Leave the "Fargo" wood chipper off for a while longer and let us enjoy a little bloodletting in peace.