Life in the catbird seat for Obama

Democrats have watched leads disappear before, especially when they sub "more of the same" for "change." 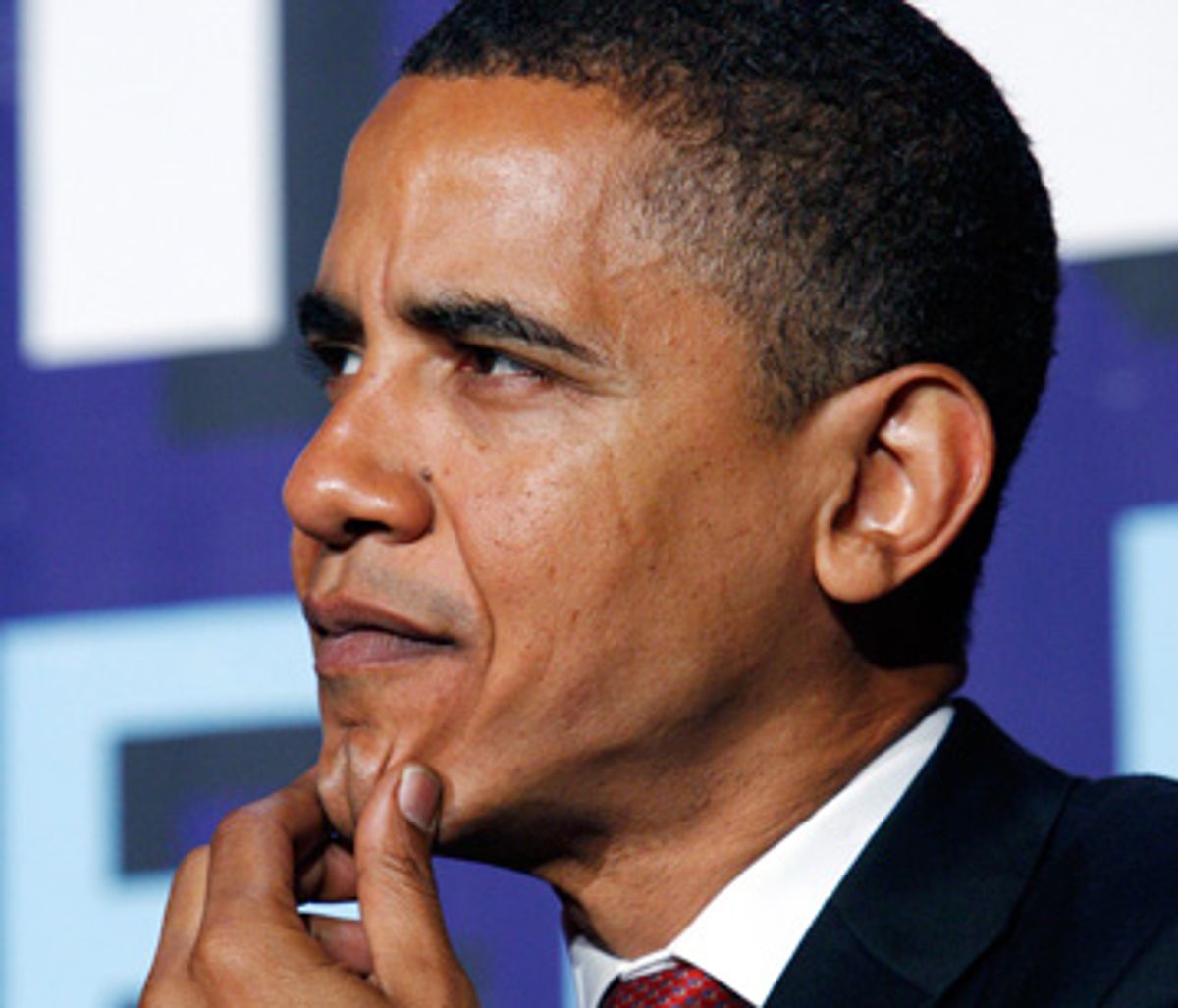 Timing may matter more in presidential politics than on a flying trapeze under a circus big top. Instead of silly-season carping at a New Yorker cover (oh, for the summer days when the magazine would run dainty watercolors of beach scenes), Barack Obama might have had a real scandal on his hands this week.

With Fannie Mae needing a federal bailout, Obama might be spinning madly to defend his maladroit choice of Washington "wise man" Jim Johnson, the lavishly compensated former chief executive of the mortgage giant, as the head of his vice-presidential selection team. But Obama reluctantly let Johnson go a month ago because of an unrelated flap about receiving discount VIP mortgages from a lender at the center of the subprime scandal. Since Obama was still basking in the glow from Hillary Clinton's withdrawal from the race, the jilting of Johnson was one of those campaign blips that barely registered with swing voters.

But had Johnson still been the chief VP talent scout this week, Obama would be facing pressure to justify Fannie Mae's aggressive lobbying of Congress to keep its capitalization requirements low, which contributed to the need for the federal rescue mission. Once again, the Illinois senator seemed guided in his political career by a good-luck leprechaun operating under the mistaken impression that the candidate's name was O'Bama.

Instead of keeping up with the Johnsons, Obama has to be a different-drummer candidate, because Americans do not normally elect presidents four years removed from the state Legislature. Only by creating and consistently maintaining a persona more idealistic and more uplifting than the generic Senate Democrat can Obama beat a courageous former POW who has spent a quarter century in Congress.

After a set of primaries that felt like they began about the time Sputnik went up, it is strange to be transported to the static battlefield of Obama versus John McCain. The fundamentals are locked in place -- and seem unlikely to be dislodged by anything less than a shift in the tectonic plates. "The campaign issues are what we thought they would be -- gas prices, the economy and the sour mood over Iraq," says Karlyn Bowman, a polling analyst at the right-of-center American Enterprise Institute. "The president is still unpopular. Congress is also not popular. And Barack Obama is not well defined."

McCain, for his part, has a two-word problem -- President Bush. A national survey conducted two weeks ago by Republican pollster John McLaughlin found that independents prefer Obama by a 13-percentage-point margin, even though McCain and Obama have similar approval ratings among these swing voters. But Bush only has a 26 percent "favorable" rating from these independents in the poll. "It isn't about McCain," says McLaughlin, who worked for Fred Thompson in the GOP primaries. "It's really about the president. McCain hasn't defined his party or his message in his own image."

It is dangerous to become too fixated on pre-convention horse-race numbers, since (blowout elections aside) the July leader in the national Gallup Poll has usually lost. Yes, it seems counter-intuitive, but Gallup has the data from President Dewey in 1948 to President Kerry the last time around.

Still, it is hard for Democrats not to be buoyed by the direction of the trend lines. "Despite some people's predictions of doom from irreconcilable differences in the primaries, the polls have been very consistent in showing an Obama lead of around 4 points," says Mark Mellman, who was John Kerry's 2004 pollster. "The lead may be at a level that is modest. But the consistency of it is pretty significant."

There are prominent Democratic strategists, only willing to talk on background, who have concerns about the November election, despite McCain's difficulties as a candidate and as a manager (you need a scorecard to keep track of who is in and who is out in his latest campaign shakeup). Their worrywart scenarios range from fears that America, in the end, will balk at electing a president with Obama's mixed-race heritage to an uneasiness with the "we are smarter than anyone else" style of his campaign.

What Obama (and McCain, for that matter) has demonstrated is an ability to keep a secret, at least when it comes to potential running mates. There have been a few flurries when would-be veeps like Ohio Gov. Ted Strickland and Virginia Sen. Jim Webb flamboyantly have taken themselves out of the running. But these refuseniks were probably following the sage strategy of not competing for a job that they felt they would never get.

Using standard political tools to outthink Obama and McCain on the VP nominees is probably a mug's game. As Mellman, harking back to his Kerry experience, explains, "People do polling because they think they should, but it really doesn't tell you much."

A shrewd analysis of Obama's thought processes in picking a second banana comes from a leading Democratic consultant far from his inner circle. According to this theory, the presumptive nominee will not anoint someone with a hefty foreign-policy résumé like Joe Biden because such a shore-up-a-weakness selection would run counter to Obama's self-confident faith in himself. Rather, believing in his ability to expand the political map, Obama would choose a second banana from a Republican state like Kansas Gov. Kathleen Sebelius or Virginia Gov. Tim Kaine or someone from the Rocky Mountain West.

No candidate has embraced the concept of "Think Big" more aggressively than Obama. Not satisfied with a traditional indoor acceptance speech where the balloons drop and the confetti cannons fire, Obama has opted for outdoor fireworks at Mile High Stadium. (Several Democrats point out that getting Obama away from the convention floor means that he is freed from speaking to a room half filled with delegates who preferred Hillary Clinton.)

While the details have not yet been publicly released, Obama has given every sign that he intends to hold a monster rally in Berlin next week that will conjure up memories of John Kennedy and Ronald Reagan. An Obama insider suggested that such an enthusiastic response in Germany would pay political dividends at home -- sending a dramatic signal that a President Obama would restore America's image in the world.

But Obama may also be cursed by the elevated expectations that surround all his public appearances. "Fourteen months ago, the new-and-different thing seemed fresh," says Joe Trippi, who was a senior advisor to John Edwards in the 2008 primaries and who ran Howard Dean's 2004 campaign. "Now seeing Obama in front of a huge crowd is nothing new. It's not the fault of his campaign. It is just the way things are."

The danger for Obama is the same one that bedeviled the last two Democratic presidents, Jimmy Carter and Bill Clinton. It can be tremendously advantageous to run for president as an outsider with nonexistent or minimal Washington experience. But, after you win the nomination, there is an irresistible temptation to embrace enthusiastically the same Democratic establishment that you opposed in the primaries.

Hamilton Jordan, Carter's 1976 campaign manager, always lamented that going native with Washington Democrats was the former Georgia governor's big mistake as he frittered away a 33-percent-point lead over Jerry Ford in the polls to eke out a hair's-breadth victory. In handing over the first major decision of his presidential campaign to the likes of Jim Johnson, Obama seemed headed down the same path, as he did when he reversed positions on government snooping (the Senate vote on FISA), public financing of his campaign and holding joint town meetings with McCain. At a time when swing voters -- not all of whom were paying attention during the Democratic primaries -- are still getting comfortable with Obama, it is a political risk for the candidate to overlay his message of "change" with a loud chorus of "more of the same."