When the bottom line overrides the Hippocratic oath

As a naive pediatric resident, I couldn't believe it when the surgeon called back and said we don't treat those kinds of patients. 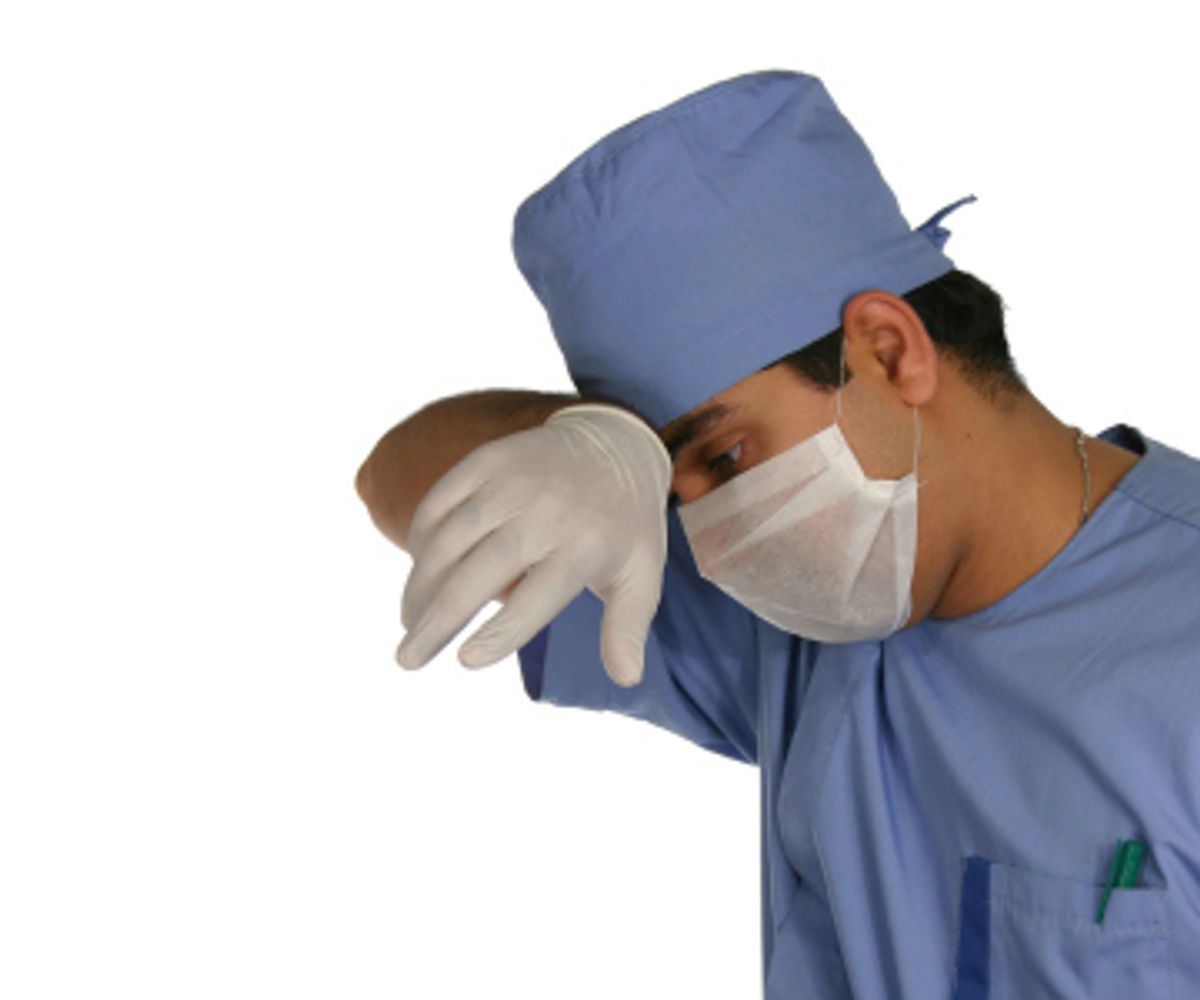 I don't remember many specific patients from my days as a resident. Like all doctors in training, I was overworked, underpaid and chronically fatigued. With that, details become murky.

What I do remember, though, are certain incidents that gave me pause and made me wonder what the hell I had gotten myself into. The kinds of situations that only residents -- who are the blunt business end of America's sloppy healthcare system -- can get stuck in.

Take my experiences in a Los Angeles hospital with kids who needed a surgeon. I would be on call, living in scrubs, trying to digest hospital chow. In the dead of the night, my pager would begin squealing, jarring me awake (if I was lucky to sleep in the first place). A number from an outlying hospital would flash on the screen. Stumbling out of bed to the nearest phone, I would learn that a child with, say, an open fracture of his leg needed to be transferred to our hospital since we offered "a higher level of care," which often meant an orthopedic surgeon who could treat the child.

Indeed, this is what happened one night. With the child on the way, I paged the orthopedic surgeon on call. Surgeons like information given to them concisely and directly. I ran through what I would say: "Sorry to wake you, Doc, but I have a 5-year-old male en route from a community hospital who has an open fracture of his right femur. According to the transferring physician, he will need to have a reduction in the operating room tonight. While we're waiting for you, we'll start morphine for pain relief and some Ancef (an antiobiotic) for infection prophylaxis." Then I waited for the phone to ring.

When the surgeon, a partner in a private Beverly Hills orthopedic group, returned my call, I was naive enough to expect some further questions about the child's history, requests for some laboratory work or more X-rays, and instructions on how to prep the operating room. Instead, his first question was: "What's their insurance?"

Medical students and residents are trained to anticipate and prepare for a lot of things. If we're doing rounds with a senior physician, we try to be prepared for questions about the illnesses of our patients and how to treat them. For those reasons, and for our love of learning, many of us would talk about our patients and read in advance of our rounds, even when we could have been sleeping.

But I was not prepared for this question. I told the surgeon I would call back with the insurance information, which forced me to call the transferring doctor. I can't remember if the child was underinsured, uninsured or was insured by the state, but it didn't matter. When I called the surgeon back, he refused to come in. His group didn't cover "those kinds" of patients.

So there we were -- me, my intern, a nurse -- somewhere between late at night and early in the morning, alone. A broken child and his parents were on their way in an ambulance. We had promised to provide "a higher level of care," but the only doctor who could give that care just killed it. What was my plan? I was the doctor, after all. I had no idea.

In the end, all we could do was give the child morphine (a lot of it) and antibiotics, hoping we could keep him comfortable. Still, every time he moved just a little, he howled in pain. We hoped he wouldn't lose his leg to some flesh-and-bone-eating infection. And so we waited until morning, when we would ask our teaching attendants to delicately negotiate with the surgical group to please come in and take a look.

What did I learn that night? Certainly nothing about the preoperative and postoperative management of children with femur fractures. No, I learned how even in the dead of night, in the presence of a child suffering, the bottom line can override the Hippocratic oath.

Such is our peculiar institution called American healthcare. We have gobs of money, the best technology, plenty of specialists, and spend the most money on healthcare in the world. Despite that, a child gets left out in the cold. Whom do we blame? Some would say the surgeon for refusing to play ball. But practically speaking, would you, whatever your job, work for free? In some cases, you can hold patients accountable for being careless with their health -- drinking, smoking, eating too many McNuggets -- but you can't prevent unforeseen things.

This is especially evident in pediatrics where children will suddenly develop epilepsy or leukemia, or have an accident. You can blame insurers for their reimbursement games, the American Medical Association for lobbying to maintain the status quo, lawyers for bringing frivolous lawsuits, or drug makers for blocking international imports to keep prices high. The list goes on and on. But in the end, put it all together and it's a system, a monstrous medical-pharmaceutical-legal-actuarial-industrial complex that's leaving a lot of people behind.

There are triumphs to report. But those often refer to the most fortunate. Take the celebrity mother who went into preterm labor at 35 weeks during a transcontinental flight. She was wheeled into a private hospital room (off limits, of course, to residents), where her private doctor and two neonatal ICU specialists were waiting for her. I was called in a couple of days later and found a very large, intimidating dude standing at the door, checking the IDs of everyone who went in and out. He was the celebrity mother's bodyguard. While the baby was there, his pediatrician, a 90210 doctor type whose signature wasn't his clinical acumen but his Tommy Bahama shirts, checked the mother twice a day.

But healthcare, unlike caviar and first-class airline tickets, shouldn't just be for rich patients and their doctors. So enough already. Let's fix this mess. Get people insured, get incentives aligned, use technology to be more efficient and effective. Stop relying on market forces, stop backing the status quo, give people, rich or poor, access to quality healthcare. It won't be perfect. There will be challenges, the most important one being that we will have to confront the fact that we're trying to do unlimited things with limited resources. But we need to level the playing field, not only for the next child with a broken leg, but for the overworked, underappreciated staff of doctors and nurses who commit to taking care of him in the middle of the night.