The rise and fall of an American beer

Before it was bought by Belgium's InBev, Budweiser trampled local breweries across this land. Who's crying in their (piss) beer now? 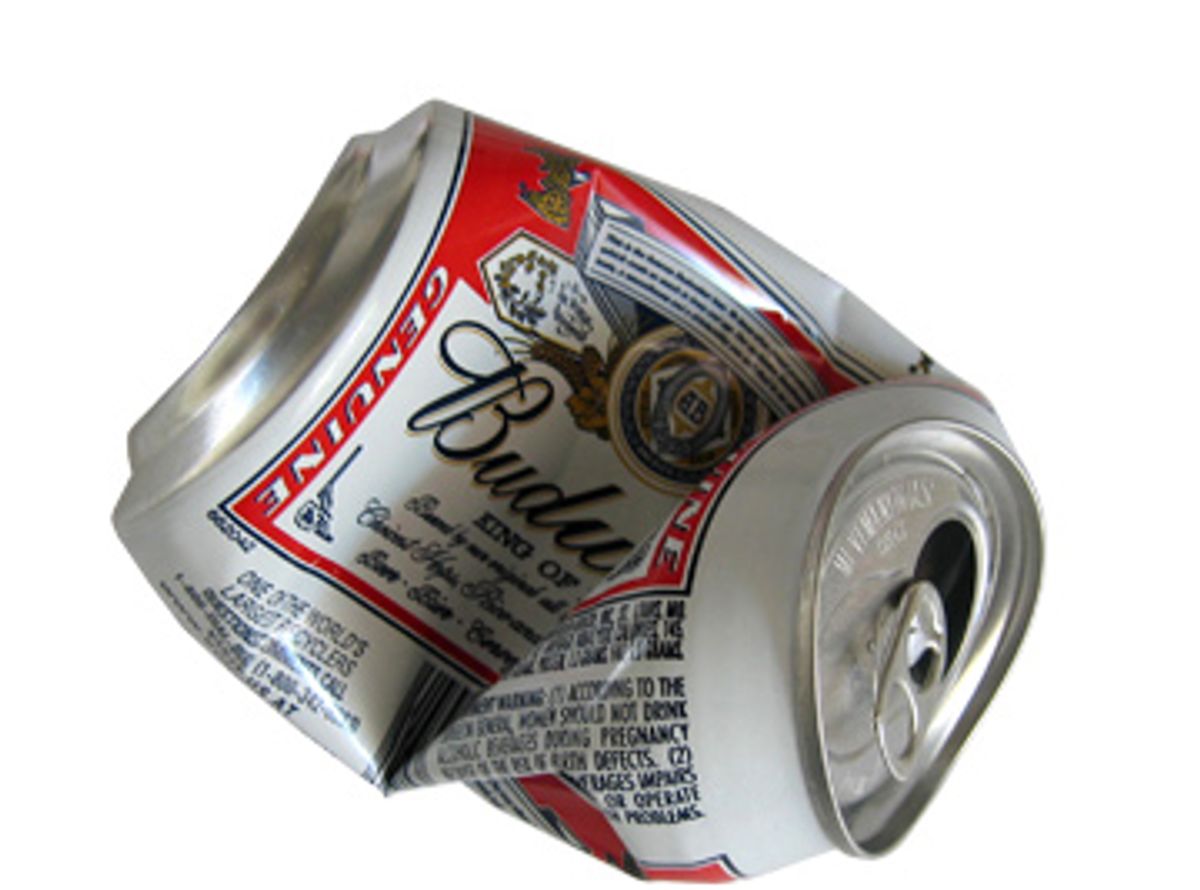 I did my heaviest drinking before I turned 21. I had the motivation: I was spinning my wheels in community college. I had the opportunity: My best friend was already losing his hair, so he never got carded. And the gas station in my neighborhood sold a beer I could afford on my $3.35-an-hour video clerk's salary: Falstaff. Twelve stubby brown torpedoes of Fort Wayne water, subtly flavored with hops and barley, packaged in a plastic yellow tray. Under every bottle cap was a rebus ("It's [heart] 2 [bell] [leaf]") that was fun to solve before the first beer, but not worth the trouble by the fifth or sixth.

Falstaff was once the third biggest brewery in America. George Will drank it when he was a teenager, as hard as it is to imagine George Will as a teenager. It even outsold Budweiser in St. Louis. But Falstaff no longer exists. The last bottle was capped in 2005. The only remnant I know of is a faded mural on the East Side of Chicago.

Ever since Budweiser was sold to Belgian brewing monster InBev on Sunday, beer drinkers have been sighing that a piece of Americana has been lost. They've got it all wrong. During its rise to President for Life of Beers, Budweiser ended up crushing dozens of local brands that formed part of this country's colorful drinking heritage.

Imagine the Budweiser Clydesdale team on a cross-country rampage, with a decrepit, tipsy August A. Busch Jr. strapped to the lead horse, wearing a bright red St. Louis Cardinals cowboy hat. Starting on the West Coast, platter-hoofed horses trample a can of Blitz-Weinhard, spewing suds all over the streets of Portland, Ore. Moving south to San Francisco, they stamp on bottles of Lucky Lager. In their hometown of St. Louis, they crash through the wall of a Griesedieck Bros. brewery, rolling hundreds of barrels into the Mississippi. They're seen next in Cincinnati, kicking a Hudepohl taster to death. The Clydesdales' tour of destruction ends in Brooklyn, N.Y., where Busch orders them to urinate in a vat of Piels, cackling that no one will be able to tell the difference.

That's an exaggerated version of what actually happened to American brewing in the decades after World War II. In 1960, there were 175 traditional breweries operating in the United States, most of them producing lagers not much different from Budweiser. As of 2005, there were 21, with Anheuser-Busch, Miller and Coors supplying 80 percent of the beer sold in taverns and party stores.

"Most of those regional beers that everyone laments were exactly the same kind of beer," says beer historian Maureen Ogle, author of "Ambitious Brew -- The Story of American Beer."

Once a bigger, better-funded brewer invaded their hometowns, small-time beers couldn't compete. They either were bought up by one of the Big Three or disappeared from the shelves.

So if Budweiser was little different from Rheingold, or Utica Club, or Grain Belt, how did it drown those rivals?

From its very inception, Budweiser was a triumph of marketing over quality. Adolphus Busch, the dynasty's founder, called his beer "dot schlop" and drank wine instead. During taste tests, St. Louis drinkers spat it back over the bar. But if the Busches didn't believe in their product, they believed in their business plan. Adolphus bought licenses for tavern keepers and paid their rent. In exchange, they served Budweiser. On one of his frequent visits to Europe, he learned about pasteurization. That, and a fleet of refrigerated railcars, kept the beer fresh on cross-country shipments, allowing Bud to break out of St. Louis.

What really made Bud was television. In the 1950s, Anheuser-Busch was only the fourth largest brewery in the nation. But it sponsored programs by Jackie Gleason and Milton Berle, and paid Frank Sinatra $750,000 for a TV special.

"Television helped make beer a national business and dictated the demise of smaller, regional breweries," wrote Peter Hernon and Terry Ganey in "Under the Influence," their history of Anheuser-Busch.

Then Bud got into sports. Anheuser-Busch bought the St. Louis Cardinals and began slapping its logo onto basketball programs, race cars, baseball caps. Nobody has spent more on Super Bowl advertising than Budweiser, which created the Bud Bowl as a station-break contest between the mother brand and its lite descendant. (It helped that Budweiser goes so well with sports on TV. It's a mild, unchallenging beer that doesn't draw your attention away from the game above the bar. You barely realize you're drinking it.)

During that same period, America was developing a national culture. While earlier generations had spent their entire lives in small towns or ethnic neighborhoods, the World War II vets and their children were moving from city to city. A salesman transferred from Rochester, N.Y., to Dallas couldn't find his hometown Genesee cream ale at the liquor store, so he started drinking a brand he'd seen on TV: Budweiser.

Budweiser is especially popular in the South. Because of the Bible Belt temperance movement, a lack of German immigrants and a hot climate unsuited for brewing, the region developed few indigenous beers. It's also close to St. Louis. Shipping was easy and, until the Braves moved to Atlanta, the Cardinals were Dixie's team.

"The people that live down here are typically very proud of their country," says Kevin Eichelberger, webmaster of Atlanta-based BeerTees.com, which sells beer memorabilia. "They're the type of people that use American products, more rural people. Budweiser's kind of a mainstay. It's a good old American tradition, like going to a baseball game or a college football game."

(Indeed, it's such an American icon that when a friend of mine moved back to England, I sent him home with a parody T-shirt that said "Buttweiser: King of Rears.")

But Budweiser's position as America's beer -- the alcoholic version of McDonald's, Disney World and Wal-Mart -- has made it difficult to reach the modern drunk. Traditional-beer sales have been stagnant since the 1990s. The baby boomers graduated from their prime drinking years, and new local beers arose to replace the hometown lagers Bud had helped pour down the drain. In 1980, America had eight craft breweries. A quarter-century later, there are over 1,300. In some cases, they've recaptured regional loyalties. As a young beer drinker in Michigan, I was weaned on Stroh's from my father's refrigerator. After that Detroit brewery went out of business, my dad started expressing his Michigander pride by drinking Bell's Amber, from Kalamazoo. Last week, I was in Duluth, Minn., where I saw the process gone full circle: Fitger's Brewery, which closed in 1972, has been converted to Fitger's Brewhouse, maker of Big Boat oatmeal stout. Then I went on to Wisconsin, where I bought a six-pack of Island wheat, brewed from grain grown on Washington Island.

With the InBev sale, local brewmeisters may have gotten their revenge on Budweiser. The St. Louis Post-Dispatch explained Anheuser-Busch's weakness by noting that "changing tastes among beer drinkers in the last decade have bedeviled its vaunted marketing and distribution systems."

Anheuser-Busch tried to get into the craft beer market by buying a stake in Red Hook ale. That killed Red Hook's cred with serious beer drinkers, Eichelberger says. Rival Miller had more success with Leinenkugel's, because the beer maintained its Wisconsin roots.

Budweiser is seen as kind of like 'The Man,'" says Eichelberger, a serious student of beer semiotics. "People who want to be anti-establishment, they're more comfortable with Miller."

For the same reason, Pabst Blue Ribbon is the cheap beer of hipsters in the funky-but-not-quite-scary dive bars of our largest cities.

"The only way [Bud] could get there is to drastically drop in sales and then be rediscovered in 20 years as retro Americana," Eichelberger says.

Could that happen? Probably not. Some beer drinkers are promising to stand up for the red, white and blue by switching to Miller or Coors -- but those breweries sold out to foreign companies years ago. And while Bud isn't the most sophisticated beer on the shelf, there are days when a no-bodied lager is the best medicine for a thirst. Like Tuesday. It was 87 degrees here in Chicago, and the lake breezes were stagnant. After Falstaff became hard to find, I confess I turned into the kind of snob who drinks Miller High Life out of an aluminum can. But right then, sex in a canoe would have hit the spot. Now that I was done writing about beer, I went around the corner to the Lighthouse, to watch the All-Star Game and drink ... an Old Style.

Hey, some towns have held on to their swill.