Flip-flopping to the White House

How Barack Obama and John McCain are changing positions on everything from wiretapping to taxes. 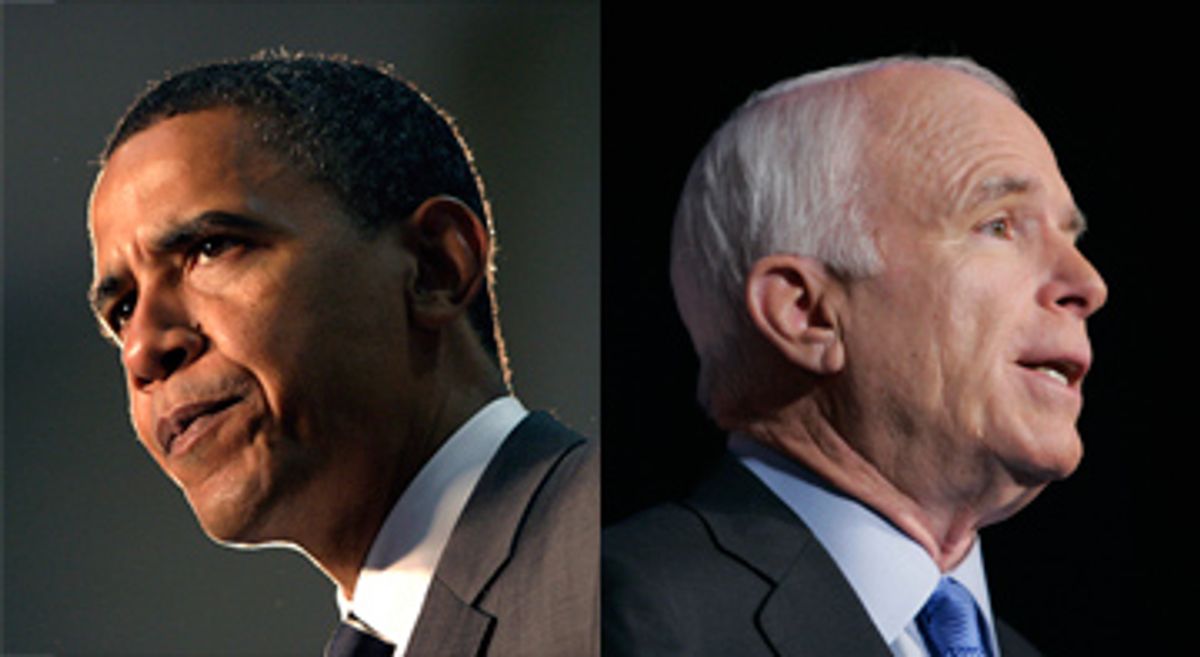 At first, when the chant started at the Republican convention four years ago, it was hard to figure out what was going on. What were George W. Bush's faithful shouting back and forth across Madison Square Garden at each other? And why, even before the night's first speaker had taken the podium, did it look like the GOP delegates were doing the wave?

Before long, though, the meaning became clear: the Republicans were chanting, "Flip," "Flop," "Flip," "Flop," alternating from one side of the arena to the other, and waving back and forth as they did it. The target, of course, was John Kerry, and in case you haven't noticed who's in the White House these days, the attack was a hit.

So it shouldn't be surprising that, in the same spirit, John McCain's campaign and the Republican National Committee are going after Barack Obama on similar grounds. Just in the last week, the RNC has sent out two detailed press releases titled "Obama vs. Obama," and forwarded around a few news articles with headlines like "Flipping and Flopping." Meanwhile, McCain and his aides and allies are hammering Obama for changing his mind on whether the troop surge in Iraq has helped calm the situation there. "It seems to me this is not just the kind of normal political flip-flop, back and forth," Sen. Joe Lieberman, the Democrat-turned-independent who has become one of McCain's most aggressive surrogates, said on "Fox & Friends" Wednesday morning.

Admittedly, the goal this time is a little different -- the GOP is trying to paint Obama as just another politician, whose policy positions are determined by what helps him with voters, not by what he believes is right. (With Kerry, the idea was to make him look weak and waffling compared to Bush.) The basic strategy, though, is the same. Republicans will play up any shifts on issues, blasting Obama when he varies at all from what he's said in the past on everything from Iraq and Afghanistan to the Second Amendment to the death penalty.

In some cases -- foremost with warrantless wiretapping, where Obama went back on a pledge to filibuster the bill he wound up voting for -- the charges against Obama may be deserved. On others, like Iraq -- where Obama has said all along he'd seek guidance from the Pentagon on how best to withdraw U.S. troops within 16 months -- the shift is more in how he's talking about the issue, not what his essential policy is.

McCain, though, is a surprising choice to be a charter member of the U.S. Consistency Patrol. He's done his fair share of "reversals," as the Republicans call Obama's shifts, in this campaign. He changed his position on offshore oil drilling (from opposed to in favor), on sweeping immigration reform (from in favor to opposed), and on tax cuts (from opposed to in favor). Democrats are trying to spotlight that track record, themselves; the goal is to chip away at McCain's image as a maverick -- to remind voters that in fact, he agrees with his fellow Republicans far more than he disagrees. For someone who named his campaign bus the "Straight Talk Express," the moves add up to a potential vulnerability.

This summer's focus on flip-flops has managed to obscure meaningful discussion of policies. The campaigns and the media alike are rolling up procedural issues (Obama's decision not to take public financing for the general election) with substantive ones (McCain's decision that tax cuts he once said he "could not in good conscience" vote for weren't so bad after all) into one big, catch-all category. Aides on both sides sound eerily similar.

"They've all been for the sake of political expedience," RNC spokesman Alex Conant said about Obama's policy shifts.

Often, the attacks come off as blatantly tactical. For instance, when the GOP blasts Obama for supporting FISA legislation the White House wanted and McCain supported (but didn't show up to vote for), it's hard to believe there's much real outrage behind the zinger.

By now, catching politicians changing their tune is easier than ever. Thanks to YouTube and the candidate's own Web sites, clips or transcripts (or both at once) of just about anything either of them has ever said is available instantly. And the 2004 campaign seems to have lodged in political writers' and operatives' heads the idea that finding even the smallest contradictions between current rhetoric and past record represents an important discovery.

What this discounts, though, is how American voters may really feel about each candidate's evolving campaign in 2008. They probably don't want to see their candidate abandoning campaign promises once they take office -- but after seven long years of a Bush administration that refused to change course until it was too late, they may see something entirely different in a leader who is not locked into the first thoughts he had on a given issue. This election may prove to be the one in which the flip-flop, as political weapon, finally fizzles. Both Obama and McCain are trying to play up their commitment to changing the country's course. And it may be that as that course looks increasingly difficult, voters will pay the most attention to how the candidates are adapting to and planning to deal with the war or the economy, rather than punishing them for lacking George W. Bush's dogmatism.