Batman vs. the lavender genius of crime!

I watched the great 10-hour Japanese antiwar film! Now it's your turn. Plus: Topiary genius, life after the tsunami, and a gay British crime lord. 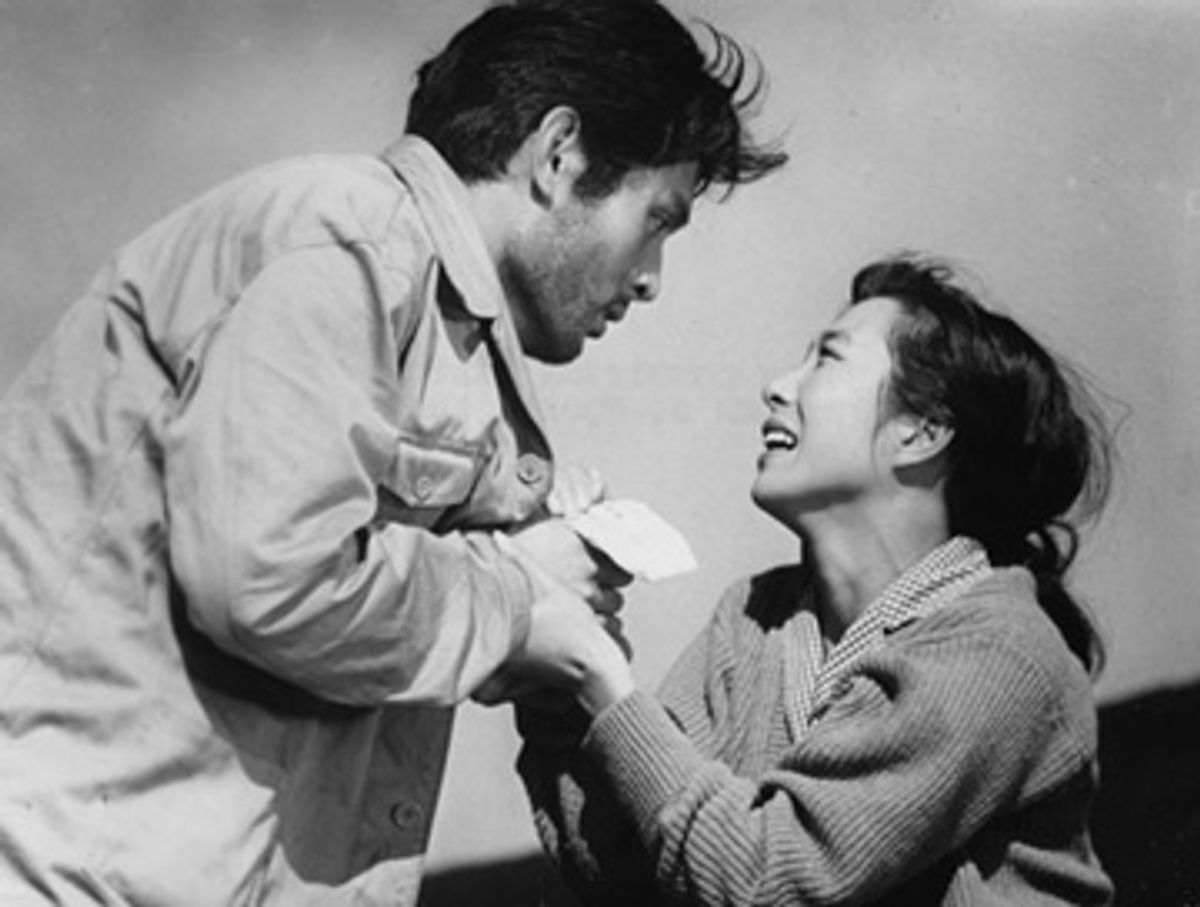 I'm probably preaching to the born-again when addressing readers of this column, but I wanted to chime in briefly on the inevitable topic of the week, that being Christopher Nolan's "The Dark Knight." It's the most anticipated movie of the summer and all that, it cost a bajillion bucks to make and it plans to make 2 bajillion back. It's got some mighty impressive special effects and it's got an actor who's now dead, eating that fake-o, pixillated scenery for lunch. And no matter how many people proclaim its awesomeness, it's also an incoherent, bloated bore from a director capable of doing much more interesting work.

My colleague Stephanie Zacharek is taking all kinds of abuse in the letters section for saying that, and, hey, she's a big girl. There are plenty of times I disagree with Stephanie's take on movies; I disagree with some things in this review too. But she's one of the first critics to look past the techno-wizardry and sophomoric darkness and see how labored and awkward this movie is. It's a pileup of incidents and episodes that never congeal into a story, a succession of striking murky-but-clean images that never create a convincing temporal and spatial universe. On the one hand, it's too pretentious to be a successful comic-book flick, but it's not pretentious enough, if you want to put it that way, for any genuine moral griminess to come through. Personally, I'd love to see a Batman film set in the universe of, I don't know, "The French Connection" or "Mystic River." Nobody in Hollywood would make such a movie these days, and I recognize that it certainly isn't what Nolan tries to deliver.

It's a cliché to say that "Dark Knight" is a teenage boy's idea of a serious film, but of course that's the source of its immense appeal. (One could call the source material, Frank Miller's revisionist Batman comics, a teenage boy's idea of literature.) I'd go a step or two further: It's either a teenage boy's poorly executed idea, or the teenage boy in question has a "Memento"-scale case of ADD, and maybe all the fogeyish, clueless protestations about how video games are ruining the youth of today are actually true.

Much of the audience for "Dark Knight" will be actual teenage boys, and they're entitled to like what they like and repent at leisure. (I can clearly remember telling friends that "Diamonds Are Forever" was the best film ever made.) But the arrested-development adult critics who just want to ride along, sort of like that guy in "Dazed and Confused" who's too old to hang out with high-school kids but does it anyway -- now that's kind of depressing.

Once upon a time, midsummer was slowdown time for the indie-film biz, but this week has been batshit-crazy with counter-Batman programming, and I can't keep up with it all. I've cherry-picked four excellent little movies to catch -- OK, one of them is almost 10 hours long! -- that are worlds away from Gotham City, or anywhere else in summer-blockbuster-land. There are at least two other noteworthy films opening this week -- Julian Schnabel's über-hipster concert film Lou Reed's Berlin and Brad Anderson's claustrophobic train-to-nowhere thriller Transsiberian -- and I'll post something on those as soon as I can, promise.

"The Human Condition" This is the nine-and-a-half-hour antiwar epic by Masaki Kobayashi, made between 1959 and 1961, that closes Film Forum's tribute to the amazing Japanese actor Tatsuya Nakadai. Relax, nobody has to sit through all of it at once, and if you think of "Human Condition" as three separate movies (which is how it screens), or maybe as a black-and-white, foreign-language equivalent of a TV miniseries, it won't seem so daunting. One film critic I know has dubbed "The Human Condition" the Japanese "Gone With the Wind," and while I think he meant that as a dis, if you consider that that phrase in all its ramifications -- as in, "Gone With the Wind" would be a massively different movie if it were Japanese -- actually does capture something.

Nakadai plays a young bureaucrat who works for the imperial Japanese war machine, an educated man with left-wing sympathies who personally opposes the war but sees it as a chance to work for good ends through a flawed system. In the first third of the film he runs a POW forced-labor camp in occupied Manchuria, seeing it as a chance to treat the prisoners humanely. In the second third (after his spectacular failure in the camp), he's a private in the undermanned Japanese army as the war winds down on the western front, attempting to preserve some shreds of dignity while waiting to be overrun by the Soviets. In the final third, he comes full circle, finding himself a cruelly abused POW in a remote and frozen Russian camp, where the Marxism he has admired from afar seems no more than a cruel joke.

As that summary suggests, we're not talking about an uplifting view of the Japanese nation, recent history or for that matter the human being. Once viewed as one of Japan's greatest directors, Kobayashi has faded into the background a little partly because his movies are relentlessly individualist in focus and pessimistic in theme, two things that (to say the least) run against the dominant currents in that nation's culture. But even if "Human Condition" now seems too creaky and melodramatic to be considered the greatest achievement in cinematic history (as critic David Shipman once dubbed it) it's a richly rewarding visual and human experience in all its bleakness.

Nakadai's performance as a man of Christlike forbearance, who travels to the edge of human endurance in a doomed and lonely struggle against an evil society, is both moving and charismatic. That comparison is not frivolous, by the way; Kobayashi was profoundly influenced by Western philosophy, cinema and religion, to the point of being called "anti-Japanese" by some of his countrymen. (I feel virtually certain that this movie was an influence on Clint Eastwood's "Letters From Iwo Jima.") Kobayashi's wide-screen landscapes (shot by Yoshio Miyajima), depicting the lonely human figure against a natural world that knows and cares nothing about him, combine wonder and mortal terror.

In all honesty, there were moments in the middle film, a familiar if well-played drama of the brutality of army life, when I felt impatient to move on. Kobayashi views his characters with tremendous compassion and a grand, overall sense of historical irony, but the picture isn't leavened with much lightness or humor. By the unutterably tragic conclusion of Part III, in which the story of one man's inevitable destruction seems to embody the demolition of all the 20th century's most noble dreams, I was profoundly grateful (if profoundly saddened) to have stuck with "The Human Condition" to the end. Until now, it's long been available only in an almost unwatchable VHS edition, but this theatrical run (in a pristine 35mm print with new subtitles) will surely be followed by a deluxe DVD release.

"The Human Condition: No Greater Love" (part I) is now playing at Film Forum in New York, with screenings of "Road to Eternity" (part II) beginning July 24 and "A Soldier's Prayer" (part III) beginning July 27. Other cities, and DVD release, should follow.

"Wonderful Town" This delicate, delightful and nearly note-perfect debut feature from young Thai director Aditya Assarad offers more evidence of the tremendous film renaissance underway in East Asia. Set in a southern coastal town struggling to recover from the devastation of the 2004 tsunami (although the event itself is barely discussed), "Wonderful Town" follows the tentative and then smoldering passion that develops between a visiting Bangkok architect (Supphasit Kansen) and a local woman (Anchalee Saisoontorn) who runs the modest hotel where he's staying. Assarad is both a patient and a surprising director, alive to the most intimate details of everyday life -- folding laundry, changing sheets, drinking coffee -- and also to the dreams people hold closest to their hearts, the ones they can barely admit to themselves, let alone their lovers.

While the plot in "Wonderful Town" is fairly minimal, it's got plenty of suspense. Will the hard-working hotel proprietor let down her hair? Will the architect disappear to the big city? Will the ghosts in the haunted, tsunami-destroyed hotels be appeased, and can a town that lost 8,000 people in a single day be healed? Assarad doesn't address all these questions directly, let alone answer them, but this irresistible picture, engaging from its first shot to its last, kind of sidles up and gracefully embraces them. (Now playing at Anthology Film Archives in New York, with more cities to follow.)

"A Man Named Pearl" Frankly, this odd and enjoyable voyage into Americana -- a documentary about a South Carolina man who has turned the practice of trimming his hedges into a recognized fine art -- has a title problem. If it were called "The Topiary King" or "Yard of the Month," for instance, you might have some clue what it's about. Mind you, it is about a man with an unusual first name, but whether Pearl Fryar owes any of his drive, ambition, remarkable physical prowess and peculiar artistic gift to that fact is debatable.

Motivated by a racist comment that African-Americans don't maintain their yards, Fryar set out to win "Yard of the Month" from Bishopville, S.C.'s leading garden club. He became the first black person to do so, and along the way conceived a passion for abstract topiary, a craft in which he had no formal training. In fact, Fryar is a self-taught abstract sculptor whose medium is discarded boxwoods and other hedge shrubbery, trained lovingly into microbial blobs, galactic swirls, soaring fishbone structures and other organic forms. His three-acre yard is pretty much the only reason anybody ever visits Bishopville, and much of the fascination in Scott Galloway and Brent Pierson's documentary emerges from how this still-segregated Southern town is dealing with (and endeavoring to exploit) its homegrown genius. (Now playing at the Angelika Film Center in New York. Opens July 25 in Los Angeles, with more cities to follow.)

"A Very British Gangster" Investigative journalist Donal MacIntyre's film is fairly standard British TV product, closer to a glorified "60 Minutes" segment then to cinematic art. But never mind -- its subject is, as he might say, feckin' amazing. Manchester gangland legend Dominic Noonan is a plump, bespectacled, bald fellow, appealing in an unfocused way, who wouldn't look out of place behind a bank manager's desk. But consider Noonan's newly legal last name -- Lattlay Fottfoy, which stands for "Look after those that look after you, fuck off those who fuck off you" -- and you begin to get the measure of the man.

"A Very British Gangster" will translate oddly to American viewers. Wisely, the distributors have subtitled much of the dense Mancunian dialect, and let's just say that as crime lords' lifestyles go, Noonan is several rungs below Tony Soprano. He appears to live in a dismal little English suburban slum house, half-furnished and appallingly carpeted, surrounded by a pasty-faced crew of teenage underlings. But he's believed to be one of Britain's greatest heist-men, and (along with his wisecracking and since-deceased brother Desmond) may be responsible for upwards of 20 gangland murders. And just wait -- just you wait -- for the response when MacIntyre asks him: "I detect a hint of lavender about you, Dominic. Are you gay?" (Now playing at Cinema Village in New York and the Culver Plaza in Los Angeles, with more cities to follow.)