A thousand and one knights

There have been countless versions of Batman, from brooding crusader to gadget-loving detective. How does "The Dark Knight" measure up? 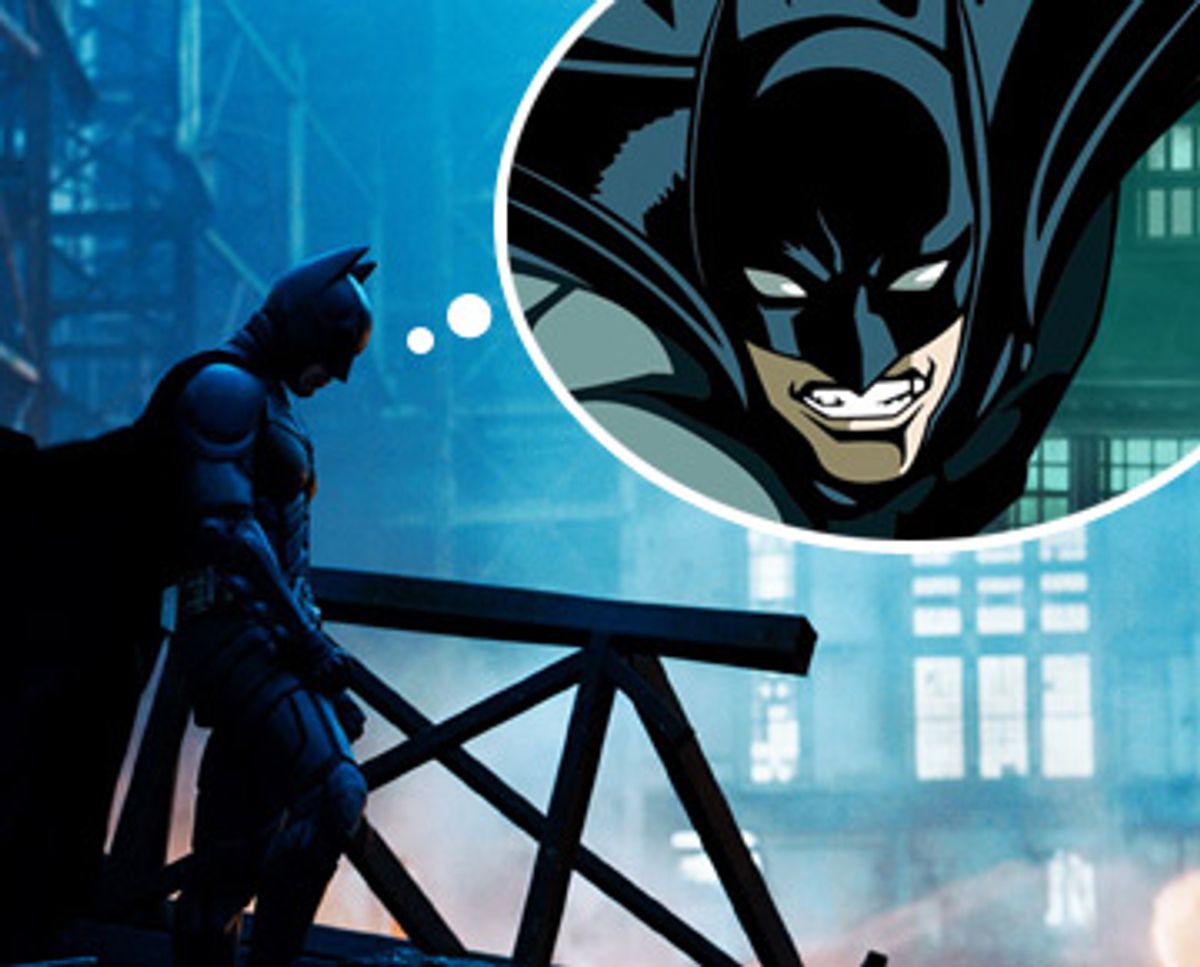 There's no such thing as a "definitive version" of Batman in comics, movies or anywhere else. He's a corporate property and a cash cow, so there are a few things that are set in stone about him: the cape, the urban setting, the millionaire-playboy alter ego. Beyond those premises, there are as many interpretations of Batman as there have been creators who've worked on his stories -- which makes the question of whether Christopher Nolan's "The Dark Knight" is "faithful" to its source beside the point. Still, Nolan has dropped the ball on one of the most compelling ideas comic books have established about Gotham City's most famous resident: that his heroism doesn't come from his batarangs and right hook, but from his magnificent, brooding mind.

In the nearly 70 years since artist Bob Kane created Batman with writer Bill Finger, there have been thousands of comics about the character, and innumerable wildly different takes on him -- all of them exactly as "valid" as they are good. Well over a hundred collections of "Batman" comics are currently in print. Pull one of them off a shelf, and you might see Batman as the cheerful, gadget-happy detective that Finger established in the early years; as the passionate Byronic hero of Denny O'Neil and Neal Adams' collaborations; as the half-demonic bruiser Jim Aparo used to draw (as Chris Sims puts it, "Every time Jim Aparo drew Batman hitting someone, it looked like -- at the very least -- they would never walk again"); as the art deco/pulp hybrid of the Steve Englehart/Marshall Rogers era; as the rippling creature of the shadows Don Newton drew in the late '70s and early '80s; as the stoic martinet who appeared in J.M. DeMatteis and Keith Giffen's "Justice League"; as the tormented father figure of recent years. (The ingenious premise of Grant Morrison and Tony Daniel's "Batman R.I.P.," currently being serialized in the comics, is that Batman's personal experience encompasses all of those stories, and that their cumulative stress is crushing him.)

For most of the past 20 years or so, the Batman seen in comics has been dominated by Frank Miller's conception of him: the self-doubting, relentlessly driven ideologue of "Batman Year One" who eventually becomes the pain-wracked one-man paramilitary force of "The Dark Knight Returns." "There are 50 different ways to do Batman and they all work," Miller said recently. "In fact, I've probably done about ten of them." The echoes of Miller's stories in "The Dark Knight" don't stop with its title (the movie also borrows a few riffs from Jeph Loeb and Tim Sale's "The Long Halloween"); the Miller idea that has stuck to the character most is that Bruce Wayne has made himself into a perfect person, physically and mentally, by sacrificing a lot of his humanity.

There's one crucial element of Batman's relationship to the Joker in "The Dark Knight" that's directly drawn from the comics -- and one that isn't, but really ought to be. The comic book Joker, once the goofy, practical-joke-obsessed villain that Cesar Romero played in the mid-'60s "Batman" TV show, has evolved into a much scarier avatar of chaos. He's a psychopath whose sole stable personality trait is his sadistic amusement at the pain and fear he inflicts, and a lunatic whose madness can curdle milk at 500 feet. That comes through magnificently in Nolan's movie: Heath Ledger's Joker lurches through every phrase he speaks, as if he's trying to extract the right words from his roiling mind and has to orient himself by the North Star of his cruelty. 1988's "The Killing Joke," a brief, savagely cruel Batman tale by Alan Moore and Brian Bolland that has recently been reprinted as a fancy hardcover, crystallized the modern conception of the character, as well as the idea that Batman and the Joker are an inseparable dyad -- that they complete each other, and that their struggle can never end, because neither one can kill the other.

The modern idea about Batman that's most glaringly missing from "The Dark Knight," though, is that he himself is mad, one way or another. Batman's enemies aren't simply criminals: They're madmen, inmates of an insane asylum rather than an ordinary jail, and he's functionally indistinguishable from them in a lot of ways. (Grant Morrison and Dave McKean's fascinating 1989 graphic novel "Arkham Asylum: A Serious House on Serious Earth" explores that premise.) A rich man whose parents were murdered in front of him who responds to his grief by putting on a bat costume to beat up criminals? Arguably, he's totally insane -- or maybe he's "super-sane," a person whose mind has adapted to bizarre and painful circumstances in radical but very useful ways.

And it's Batman's mind that's at the core of the best stories about him. He's infinitely dangerous because he's infinitely clever: There's a sequence I still remember vividly from a decade-old Justice League story in which he holds off an invading alien fleet with nothing more than a box of matches and a brilliant plan. One disappointing thing about Nolan's interpretation is that his Batman is basically just a growling James Bond -- he relies on super-expensive gadgets and can beat down anyone in a fight, but any number of action-movie badasses can do that. We never see "The Dark Knight's" Batman doing anything particularly thoughtful, which is a hallmark of the comic book Batman. Not for nothing has he starred in a series called "Detective Comics" for close to 70 years.

There are also a couple of aspects of Batman comics that are impossible to capture in a live-action film -- mostly because a movie's images always have to carry the massive burden of believability, and the fact that comics are drawn gives them a lot more latitude for visual impressionism. (For that matter, the "sound design" in the comics is considerably more effective: Batman's guttural hiss is much scarier on the page, where readers can only hear it in their own minds, than coming from Christian Bale's all-too-human larynx.) In "The Dark Knight," Gotham City is solid and looming, imposing and full like a slightly creepier version of Chicago or New York. In the best Batman comics, it's practically a character itself: an old-money beauty fallen into hopeless decay (imagine what might have happened if New York actually had dropped dead when Gerald Ford told it to), a maze of alleys and gargoyles and disintegrating, mossed-over remnants of splendor.

That version of Gotham is a bit more in evidence in the other Batman movie released this month: "Gotham Knight," a direct-to-DVD animated feature. Actually, it's not quite a feature, but half a dozen vaguely linked vignettes created by Japanese and Korean animation studios in an anime style; their scripts were written by Americans with connections to Nolan's movies and "Batman" comics. The stories involve a few more familiar supporting characters from the comics than "The Dark Knight," most notably detective Crispus Allen, one of the stars of Greg Rucka, Ed Brubaker and Michael Lark's excellent "Gotham Central" comics; detective Anna Ramirez, who appears in both the animated and the live-action movie, bears a very strong resemblance to "Gotham Central's" detective Renee Montoya.

"Gotham Knight" is, frankly, nowhere near as good as "The Dark Knight" -- there's nothing as sharp and speedy as Nolan's dazzling opening bank-heist sequence, and its pace and line readings are slapdash in a familiar low-budget-cartoon way. But it doesn't have to pretend to be "real," and the spectacle and variety of its visual approaches to Batman and his surroundings are a welcome contrast to the gray bombast of the live-action movie. Its first episode lays out the premise of the project in miniature: A group of kids describe their encounters with Batman, and their explanations of him have almost nothing in common. He's a half-imaginary shadow, dissolving into smoke; he's a transforming robot with an arsenal of mechanical weapons; he's a guy in a bat suit, frail and bleeding. The point is that they're all sort of true, and the fact that the various segments of the film all look different doesn't mean they contradict one another.

And although they don't have the boundary-pushing illustrative verve of the best-looking "Batman" comics of recent years (Darwyn Cooke's cool, minimal "Ego," Paul Pope's ferociously blobby "Batman: Year One Hundred," J.H. Williams III's multilayered compositions in "The Black Glove"), they manage to fill in some of "The Dark Knight's" conceptual gaps. The most effective segment of "Gotham Knight" portrays Batman as a creature of almost pure intellect, whose body is effectively a liability: "Working Through Pain," written by Brian Azzarello (who collaborated with artist Eduardo Risso on the Batman book "Broken City"), is explicitly about how he manages his physical pain but is entirely in the thrall of his unending psychological torment. A little more of that might have granted some depth to Bale's stiff, guarded performance.

Still, there's something missing from both "Knights" that an action movie -- of any kind -- can scarcely provide: a space for contemplation. Comics can be read at any speed you choose, and the best ones are meant to be lingered over, image by image. "The Dark Knight" is a modern bullet train of a film: It grabs its viewers by the neck and shoulders and frog-marches them from scene to pyrotechnical IMAX scene. It's not surprising, then, that it focuses so little on what's going on behind that sturdy black mask. In a story about the relationship between madness and a detective's logic, which is what most of the best Batman stories are, the reader's own mind has to be given room to work, gazing at pictures and working out what happens in the space between panels.