Reading a long novel on a tiny screen is claustrophobic, but if the book is good your brain will get the message. 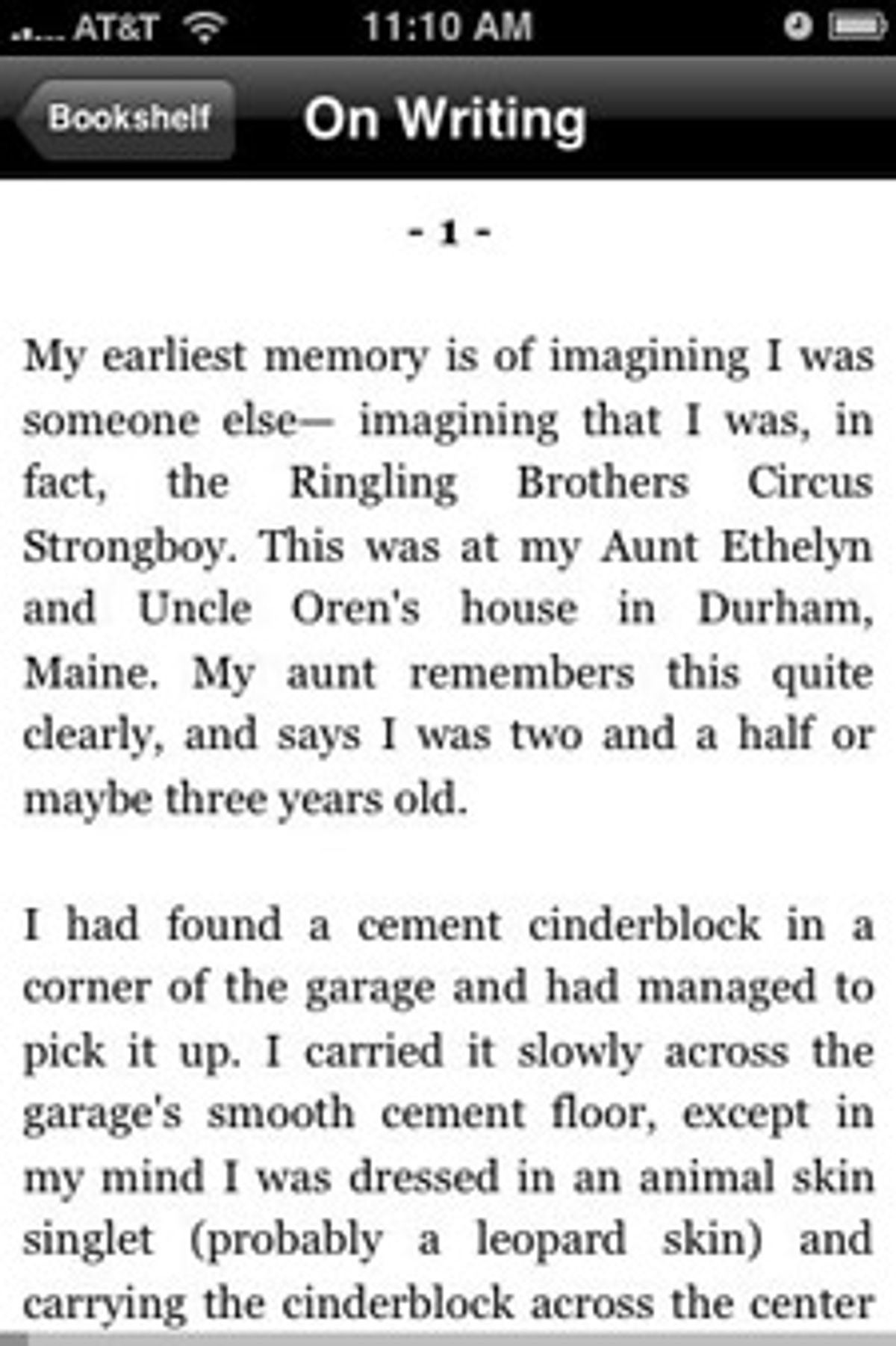 Everyone's already written plenty about the new iPhone 3G's most important feature -- third-party applications -- and I'm amazed at how so many tiny new programs were kept under wraps with nary a leak. But there's one app in particular I'd like to focus on, one that, when I discovered it, nearly knocked me off my chair. (It didn't, though a little later I knocked my original iPhone off the desk and shattered the screen to bits, but that's another story.)

Seeing the eReader program icon on the iPhone's screen literally brought tears to my eyes. Seriously. Having spent the last decade reading scores of e-books from backlit cover to cover on Palm, Windows Mobile, Nokia and BlackBerry devices, I thought the arrival of eReader to the iPhone was a dream come true ...

... and at the same time, a nightmare, turning the iPhone into the worst e-book reader in the world, which I'll get to in a minute.

(Full disclosure: My first novel was one of the first mainstream titles by a commercial publisher to be offered as an e-book, by Peanut Press, which eventually became eReader and was recently purchased by FictionWise; the e-book version of the novel, "The Deal," went out of e-print -- which I didn't know was possible -- and will likely rejoin the catalog in coming weeks.)

Yes, I've handled the Kindle and Sony reader devices and flipped through a few pages, but that's as far as I got on either device because two major bummers make the experience too unpleasant: 1) There's no backlight, and though the text is gorgeous, I'm irked by the screen blackout when turning pages (necessary to refresh the bits), and 2) the devices are clunky and I don't want to carry more than a single do-all device in the first place. What the Kindle got right (really, really right) is the ability to browse and purchase books over the air, without having to connect to a computer to sync titles the way I had to with my Treo.

To be fair, reading an entire novel on the tiny Palm Treo screen is a little claustrophobic, but if the story is worth its weight in salt you soon see past the screen size and see only what the writer evokes in that most powerful graphic processor of all, your brain. (All the same, I can't say the same for the Kindle/Sony reader blackout-blink, which made my jaw clench with every turn of the page.)

It was only a matter of time before e-books would show up on the iPhone. It took a year, but it was worth the wait. OK, in truth I was able to read freebie e-books like those by whiz-thinker Cory Doctorow on my jail-broken original iPhone before the 3G was released, but the titles were few, with no access to the wider mainstream e-book selection offered by eReader.com or FictionWise.com or Amazon.

Unlike Palm or BlackBerry or Nokia smart phones, the iPhone's screen is comparatively gargantuan. No, not as large as the Kindle's with its nice wide margins that add to the illusion of actual ink on paper, but wonderfully white and bright with beautiful contrast. (My guess is an update will offer the same margin width option available in the other versions of eReader.)

The backlight means you can read in bed without disturbing your bedmate (in my case, a side-hogging Jack Russell terrier). The backlight is also a minus because it drains the charge, so plugging in to the charger is advised if you don't want to awake to a pitch-black screen. Turning the brightness all the way down makes the text too hard to see in daylight settings the way Kindle does it, though notching up the brightness a smidge offers just the right amount of light to provide enough illumination to see things clearly.

The default text size is fine to my eyes, and I actually prefer even tinier text. (I'm talking teeny tiny, like the nearly microscopic type used in the mass-market paperback edition of Ayn Rand's "Atlas Shrugged.") Those who prefer larger print can increase the font to large or huge. The default serif font, Georgia, is as smooth as you'd expect on the printed page, and two sans serif fonts, Marker Felt and Helvetica, are also available. (I'm guessing eReader will eventually support the optional typeface collections available for the other versions of the program.)

Downloading e-books on the iPhone is as easy as downloading on the Kindle -- sort of. Type in your eReader or FictionWise user name and password and up pops a list of titles you own. Click to download, and in less than a minute you've got your nose to the pages, which flip right to left with a flick of the finger. Hold your fingertip down on a word to look up the definition in previously purchased reference books like Merriam-Webster -- and that's the second time I mentioned that the books available are ones you already own.

Unlike the Kindle, there's no way to directly browse and purchase titles with eReader alone. To do that you must visit the companies' Web sites on the iPhone or a computer. The latter is easier, since neither FictionWise nor eReader offers a slash-mobile version of its site (yet). Obviously the ability to directly browse and purchase titles with eReader is the way to go, and I'm hopeful the feature will show up in an upcoming version. Regarding updates, FictionWise boss Scott Pendergrast said in a phone conversation last week that version updates would occur frequently, with 1.1 possibly available as soon as Friday.

I may write more about e-books this week, and if so I'll be sure to relay any eReader developments I uncover.

As for that nightmare realization I mentioned at the start -- why the iPhone is at once the best and worst e-book reader ever?

With eReader being the dream-come-true application for this avid reader, that leaves an additional 499+ applications to browse through and distract me away from reading into the wee hours of the morning.

Time for that second cup of java.