Why I hate summer 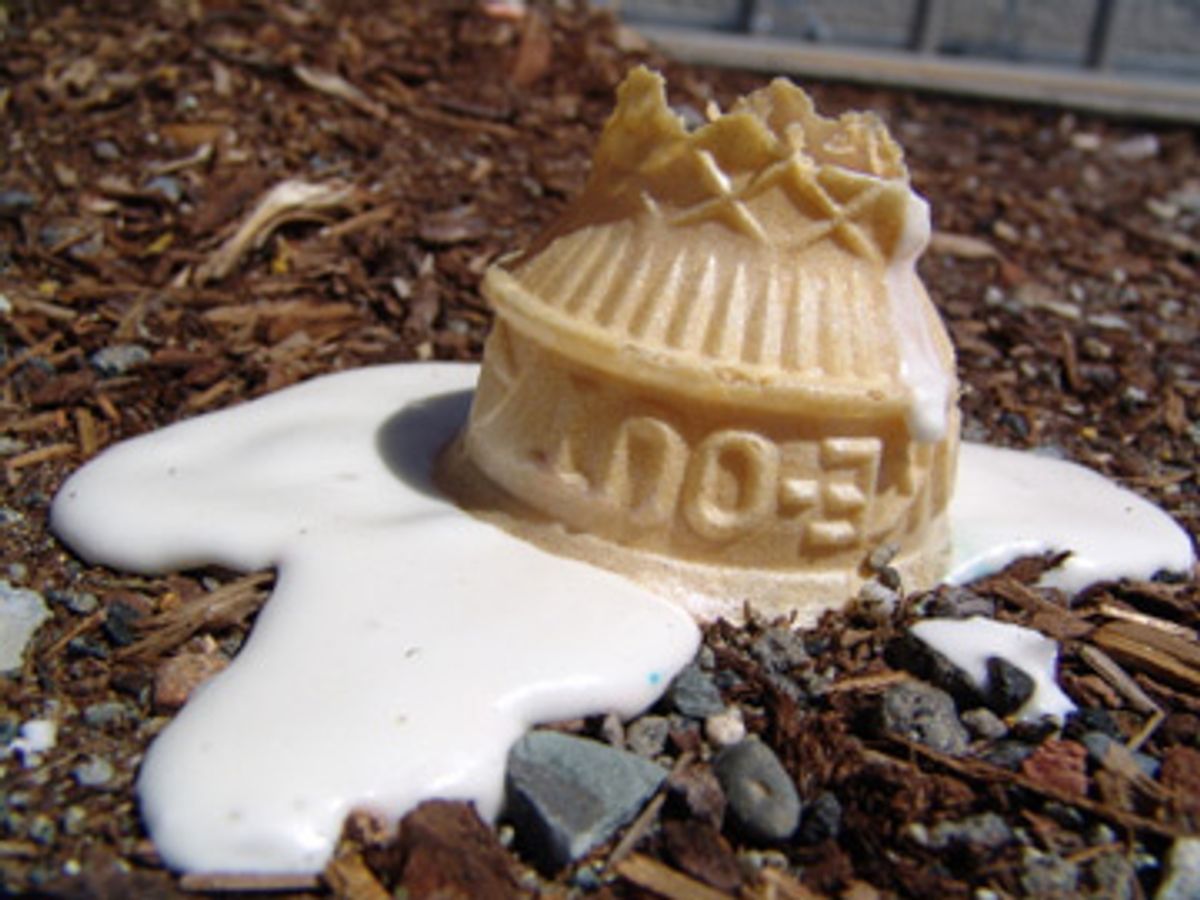 It's the last day of school, minutes before the bell rings. I'm excavating the year's detritus from my slime-green locker -- crumpled homework assignments stained with ink and ketchup; dark vials of hardened rubber cement. Around me, kids are chattering about the trips they will take and the amusement parks they will visit, tossing books and papers into trash bags and at each other's heads. A small group silently marks the seconds under the large wall clock hanging above the double doors. When the reedy bell finally shrieks, cheers reverberate through the hallway. I heave my knapsack over my shoulder and trudge out into the sticky Nebraska heat, crestfallen.

It wasn't that I liked school so much. It's that I hated summer.

Summer meant sweaty thighs sticking to plastic chairs and getting diaper rash, long after you had stopped wearing diapers. It meant waiting around at barbecues to scarf down a still-cold hot dog that tasted of freezer burn and lighter fluid. Worst of all, summer meant camp, where I would be required to live, play and shower with other children. I would be forced to sit atop an elderly horse as it plodded down a well-worn trail, stopping whenever a horse ahead paused to release a cascade of feces that hit the hard-packed dirt with a warm plop. It meant bleach burns in the arts and crafts shed, and being made to sing Zionist folk songs at dinner.

"Look at Elliot," a dreadlocked counselor reprimanded me, pointing to a pale boy who stood upon a table, wiggling his behind and bellowing the words of Theodore Herzl with a fervor sure to make a hardened Hezbollah fighter blanch. Elliot's parents had recently divorced, his younger brother was autistic and his St. Louis Cardinals cap covered the fine hair that was just beginning to grow back after his battle with childhood leukemia. "With all of the challenges he has to face, he can still show some spirit. What's the matter with you?"

I twisted my sunburned lips into a painful grimace. "My stomach hurts," I told the counselor. "I think I have food poisoning."

The infirmary was my one respite, a place where I could lie down, bathed in air conditioning, and avoid the tyranny of enforced merrymaking for at least a few hours. Through the open window, I would listen to the hum of my fellow campers shrieking and splashing with a mixture of superiority and envy. Why were they able to enjoy themselves, I wondered, as I lay on a lumpy cot, reading "Night" by Elie Wiesel.

The word on the street is that people like summer. They welcome the chance to relax, to consume alarming amounts of melon and engage in casual sex acts beneath a starry sky. I can appreciate this on an intellectual level, but the inability to enjoy these kinds of simple pleasures has persisted throughout my life, and something about the summer months throws my general malaise into painful relief. The constant burden of forced merriment -- the sense that you should be out somewhere, anywhere, taking advantage of it all, like Gidget or the Kennedys, weighs heavily on me. Like New Year's Eve, Valentine's Day, St. Patrick's Day and Halloween, the pressure to do something significant, meaningful and -- most of all -- fun paralyzes me with anxiety. I obsess about all the places I could be and the people I might have been, with just a slightly better combination of genetics and fate. I could have been a bronzed surfer girl on the beaches of Malibu, someone tanned and toned and easygoing. I could be the owner of a seaside taverna on the Adriatic or Aegean coast, one of those rocky sun-kissed shores where nobody seems to work and joy is abundant.

Or I just could have been someone with smaller breasts.

Seriously. I know this is not the wisdom espoused by Maxim, but in the summer, my breasts are the Moriarty to my Sherlock Holmes, the Lex Luthor to my Superman. In the winter I can camouflage them under carefully chosen sweaters and coats, but in the summer -- boom! There they are, out for all to see. Wearing a bra is unbearable, going without one unthinkable, and a bathing suit, well, I don't want to talk about it. Other girls might prance about in floaty little rompers and strappy sundresses, but from the time I hit puberty, even a simple tank top made me look like a deranged prostitute from a Fellini movie, the kind who will willingly smother the faces of the local boys in her tremendous mammaries for a cigarette and a pound of grapes. Even before gravity took its terrible toll, any shopping expedition for summer apparel was certain to end in tears.

"Cheer up," my mother used to say, while I struggled with a whispery little sundress in a cramped dressing room. The triangular flap of flimsy cotton meant to serve as the bust barely concealed my areolae. "Maybe one day you'll have a mastectomy."

I would have reprimanded her, if I didn't sometimes think the same thing.

Once I was old enough to drive and could come and go as I pleased, I was able to temper the tedium and self-consciousness that summer brought with liberal amounts of mind-altering substances. But just when I might have conquered my summer phobia, I moved to New York City.

The summers in New York are appalling, hot and horrible, and the smells alone are enough to make you gag -- an opaque, unholy stew of garbage, sweat and sewage, with a soupçon of spoiled milk and urine. I won't even get started on the subway, except to say if you have ever waited on a New York City subway platform on a scorching August day for a train that refuses to come, sweat dripping down your belly as some busker pounds out a furious "tribal" rhythm on the "drums," then you understand why there will never be peace in the Middle East. The heat brings a unique blend of fury and lethargy -- I feel like I could murder someone, and be totally indifferent if they killed me back.

But more than anything, my real problem with summer is the way the world grinds to a halt. Friends and acquaintances flit in and out, and promises made in the spring are suddenly postponed to the fall.

And then there is all this time -- silent, empty, dangerous time -- to think about what the hell you are doing with your life.

During the rest of the year, we plug along, cocooned in our dark clothes and home offices, e-mailing and IM'ing, sure that the guy we met the other night, the one from the big agency or publishing house, is finally going to be the one to make all our dreams come true. There's no time to wonder if there's more to life until June rolls around. We may officially recognize the last day of the year as Dec. 31, but everyone knows it's still when the school year ends. Summer represents a moment of departure from our mundane lives, both a respite and a new beginning. But like so much else in life, the reality inevitably disappoints. The days drag on. The phone stops ringing and the e-mails stop coming. We watch, helpless, as the more charmed among us disappear to vacation homes and parties, into the magical world of the "already made-its." Those of us further down on the ladder are doomed to wander the silent city alone, brooding on what we haven't done, and on how much farther there still is to go.

For me, there comes that day of reckoning at the end of August. When I was younger, all I could think about was getting back to school, back to normal life. Now that I am an adult and have realized there is no such thing as real life, all I can think about is getting out. I'm trapped in my dingy, poorly ventilated apartment, unable to move. For days I do nothing but sit on the couch and watch daytime television, nauseated by the scent of my own sweat. And at last I think, enough. I've had it. I will move to someplace nice, like San Francisco or Switzerland. I will go outside, have a yard and a dog and a group of friends who will be there for me and with whom I will not feel unhealthily competitive, as I was promised by the sitcoms of my childhood, and finally, I will be happy.

But then, suddenly, it's September. The air is warm but carries a subtle breeze of relief and possibility. The phone starts ringing again, and giddily, I make plans and appointments, full of new purpose, running around greeting people I forgot I hated.

I swing open my old locker to accumulate the refuse of another year. The summer is over. There's three whole months to enjoy -- before it's time to start complaining about winter.