The Eternal City is too vast and ancient to grasp, and the harder you try, the more it slips away. So you have to dream your way into it. 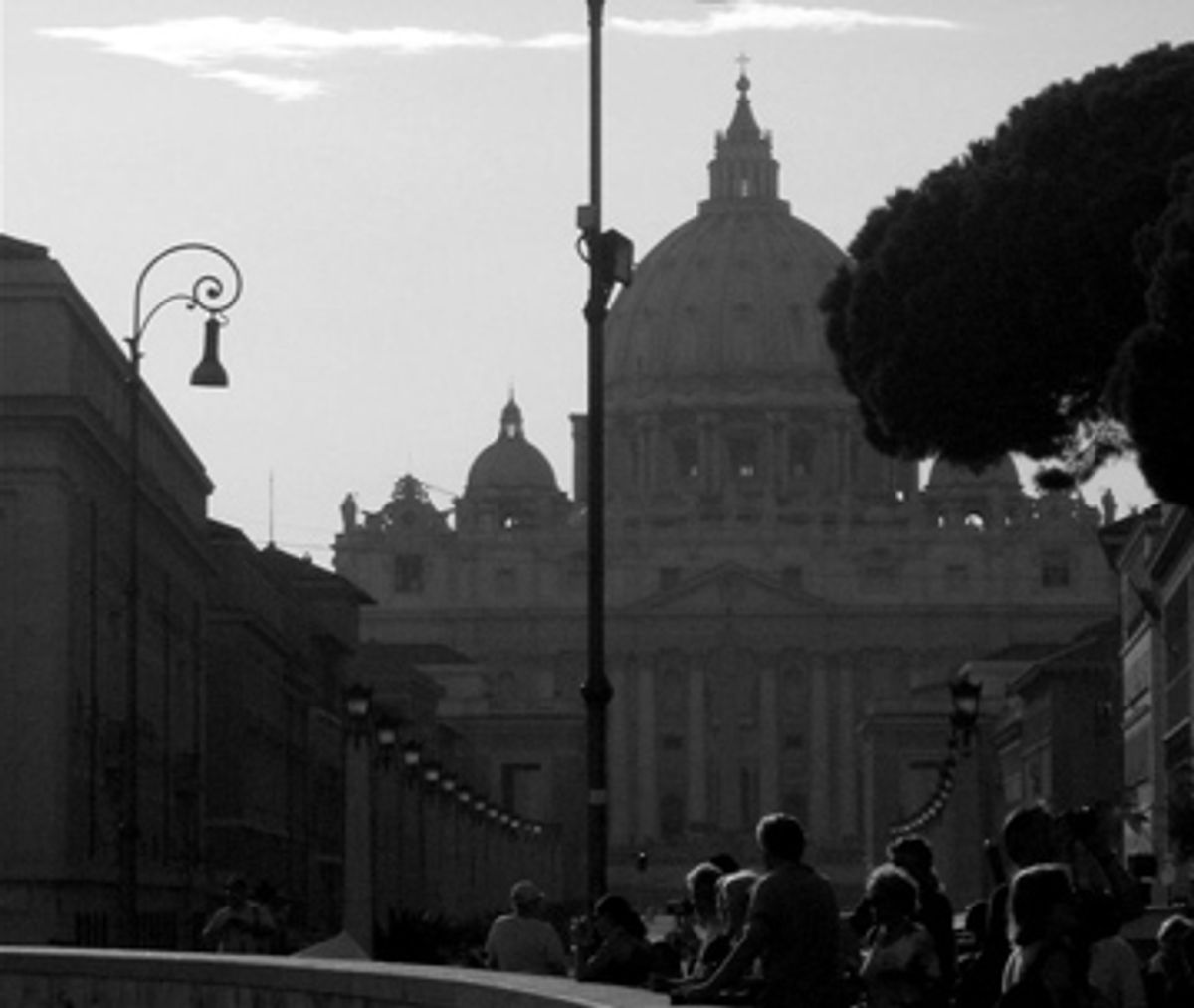 On the Fourth of July, a little group of Americans held a patriotic celebration in Rome's Piazza Farnese. We chose a spot near one of the two monumental fountains, huge basins that were originally in the Baths of Caracalla, built around A.D. 212. In typical Roman fashion, some bigwig swiped them 500 years ago to use as ornamental gardenware in his front yard. It wasn't our idea to use a 2,000-year-old bathtub as the backdrop for a celebration of America's dubious performance in the War of 1812, it was our friends', two teachers living in Rome. But our group of 10 (we were traveling with another family of four) happily went along with it. We waved the sparklers in the warm night air and sang "The Star-Spangled Banner" as a few young Romans leaning against the fountain looked on benignly. Still, just to make sure they didn't get the wrong impression, we added "and no more Bush!" after we finished. "Yes! Finally!" they said, smiling.

Any international goodwill our discreet celebration may have generated was quickly dissipated when a gang of young Americans suddenly stomped down the crowded Via Baullari, arms linked and braying "USA! USA!" as if America had just won some world-historical football game -- which may have been precisely what they believed. Fearful of being linked with these Visigoths, we moved circumspectly to the side of the street and tried to erase from our faces that unfocused, ingenuously confident expression that instantly gives you away as a Yank all over the world. It didn't work, but it didn't matter. The loutish chant (get used to it -- the Olympics are coming!) barely caused the strollers to raise an eyebrow. Romans have been dealing with invaders since A.D. 410 and are quite used to our barbaric customs.

Despite the staggering economy and the weak dollar, there are still hordes of Americans in Italy. In certain places, like the Cinqueterre (Thanks, Rick Steves! Since you began promoting it as a bucolic escape, the place is completely overrun) and Florence, there were so many Americans -- on the trails, in restaurants, in line for the museums -- that it felt like you were in a Disneyland "Italy Experience" ride. But that's Italy. There's a reason people travel from all over the world to come here. As long as you don't have to deal with anything bureaucratic, it's still the best place on the planet. And even with the euro kicking the dollar into the tank, you can still get a cappuccino for $1.50.

This was my seventh visit to Italy. I think it's my last grand tour -- by which I mean the classic summer visit with the family to the classic places. The heat and the crowds force you into a high-culture death march that rivals Bataan, and you have to bail out on half of the things you want to see. It's frustrating trying to sink into the spirit of a place while your horizons are shrunk by dealing with endless logistics and your imagination stunted by the banal soundtrack of guidebooks. When things hit bottom, the enormous words on a middle-aged tourist's T-shirt became our family mantra: Is the vacation over yet?

But that's why God invented gin and tonics, iPods with "So What" on the playlist and pool volleyball. And when you come back to life, you're still in Italy -- a country as absurdly overflowing as the Bernini fountains in Rome. There's always something marvelous to see, some relic of lost human glory lying around -- usually where you least expect it. For it isn't the officially approved aesthetic experiences that you usually remember. It's the ones that sneak up on you, that you see out of the corner of your eye.

English poet John Keats, who died in a house on the Spanish Steps in Rome, famously extolled what he called "negative capability," a state of open-mindedness characterized by not engaging in an "irritable reaching after fact & reason." This half-awake quality, which suffuses some of his great odes ("a drowsy numbness pains my sense"), is indispensable both to the creative state and to the traveler. To really see a place, you have to dream yourself into it.

One of the highlights of my trip was sitting on a little bridge in Venice, half asleep, dimly feeling the city's life going on heedless of my tiny existence. And nowhere is that erasure of the self and its endless questions more needed than in Rome -- "fleeting Rome," as Italian writer Carlo Levi eloquently called the Eternal City.

Rome is too much. Too many layers of history, too many ruins, too much impossibly great art, too much human glory. Its sublimity is impenetrable: You find yourself bouncing off it like a ball. Excessive exposure leads to overload: All your aesthetic systems shut down. Few people can do more than four or five hours of a museum a day -- what do you do when an entire city is a museum? In "A Roman Journal," Stendhal, whose passionate adoration of Italy may be unequaled by any writer, astutely commented, "The more unfamiliar a sensation is, the more quickly one tires of it. This is what we read in the bored faces of most of the foreigners who tramp the streets of Rome one month after their arrival. In the town where they live, they would see an arts object eight or ten times a year; in Rome they must see every day eight or ten things that are in no way useful in enabling them to earn money, and in no way entertaining. They are only beautiful."

And it's even harder to see the Italian capital today. Stendhal was writing in 1827, when educated Europeans knew Latin and thus felt a personal connection to the Roman Empire, of which Rome is a gigantic living cemetery. To parachute into Rome now is like being placed in a time machine with no instructions. A kind of desperation overtakes you as you stagger through the heat and buy your kids gelato: How can you catch up? You have six days to journey into the archives of human civilization and come back with something that will endure.

You go to Rome to get high on history. But history speaks only in fragments. Once you realize you can't get your arms around the Renaissance, let alone the classical and Christian eras, you give up trying to catch two thousand years of time and settle for moments.

For me, one of those moments came in the Palazzo Massimo branch of the National Museum of Rome. It's a fantastic museum, famous for the brutal masterpiece "Boxer at Rest," perhaps the most devastating portrait of a ravaged athlete ever created. But the work that spoke to me was a fresco painted in the second century. The large fresco, which once adorned a commercial building involved with river trade, depicted various mythical and fantastic creatures in a maritime setting, as well as various species of fish and crustaceans. Off to one side was a boat with several figures rowing. The tiny faces of two of those men, who were peripheral figures in this oddly whimsical, wallpaper-like scene, caught my eye. Like the mummy portraits done by Greco-Egyptian painters of the first century, they were disconcertingly, shockingly realistic. One of the men, a singularly handsome youth, was looking straight at the viewer, with a penetrating and frank expression. He bore a distinct resemblance to JFK Jr.

That tiny face, no more than a couple of inches high, created an enormous silent suction that pulled everything I'd seen in Rome out of the dead past and into the present. Why was this man there? What happened to him? Why was he still here?

Rome specializes in these surreal time tunnels, moments when the past suddenly undercuts the present. If you're lucky enough to fall down one of those tunnels, you close your eyes and keep dropping as long as you can.

And in Rome, every street can open beneath your feet.

Sometimes, walking through a city, I imagine that it is a living organism, and that its streets are neural passageways, the frozen residue of thoughts. That dead-end alley in Chinatown is not a walkway to nowhere but a complex line in a poem, one written in an exquisite unknown grammar that you suddenly are able to comprehend. At such moments the city becomes a mirror that reflects your memories and desires. Space overpowers time: As you walk through its streets, you are walking through your own life. Every unknown building and bend in the road are chapters in a story that has already been finished yet is still beginning.

Novelists have always been drawn to the idea that great cities are themselves characters, personages so powerful they take center stage. In Georges Simenon's Maigret novels, Paris is as important a character as the weary, burly detective. At the end of Balzac's "Lost Illusions," the hero looks down upon the "hive" of Paris and vows to conquer it. The fog of Dickens' London is a living force. The apotheosis of this uncanny reversal of humanity and city is found in Paul Auster's "City of Glass," when a character's erratic movements through the streets of New York are revealed to be a hieroglyph that must be deciphered. In Rome, the streets sometimes feel like animal trails in the great forest of human history -- paths that are at once unutterably weighty and completely random.

Our last night in Rome, we wandered at dusk through the Ghetto. A coolness had fallen on the city and the shadows lingered on the piazzas. Passing the Portal of Octavian, we came to the end of a dead-end street. Below, in the shadow of the Theater of Marcellus, a pianist was playing Chopin. A few listeners were sitting on a railing; a woman was painting. Ahead of us rose up the three illuminated columns of the Temple of Apollo, built in 20 B.C., when the Roman republic, the glory of the world, had just fallen. The past touched us, a brief blast of trumpets and light, then receded into the gathering darkness, leaving only a faint echo, like the sound of the sea. It was one of a thousand corners in this unknowable city. We looked around to remember this fleeting and eternal moment. And then we walked on.