"People of the world -- look at Berlin!"

Barack Obama's much-anticipated speech in Berlin wasn't a partisan affair, but a chance for him to speak of the city as an emblem for what needs to be done. 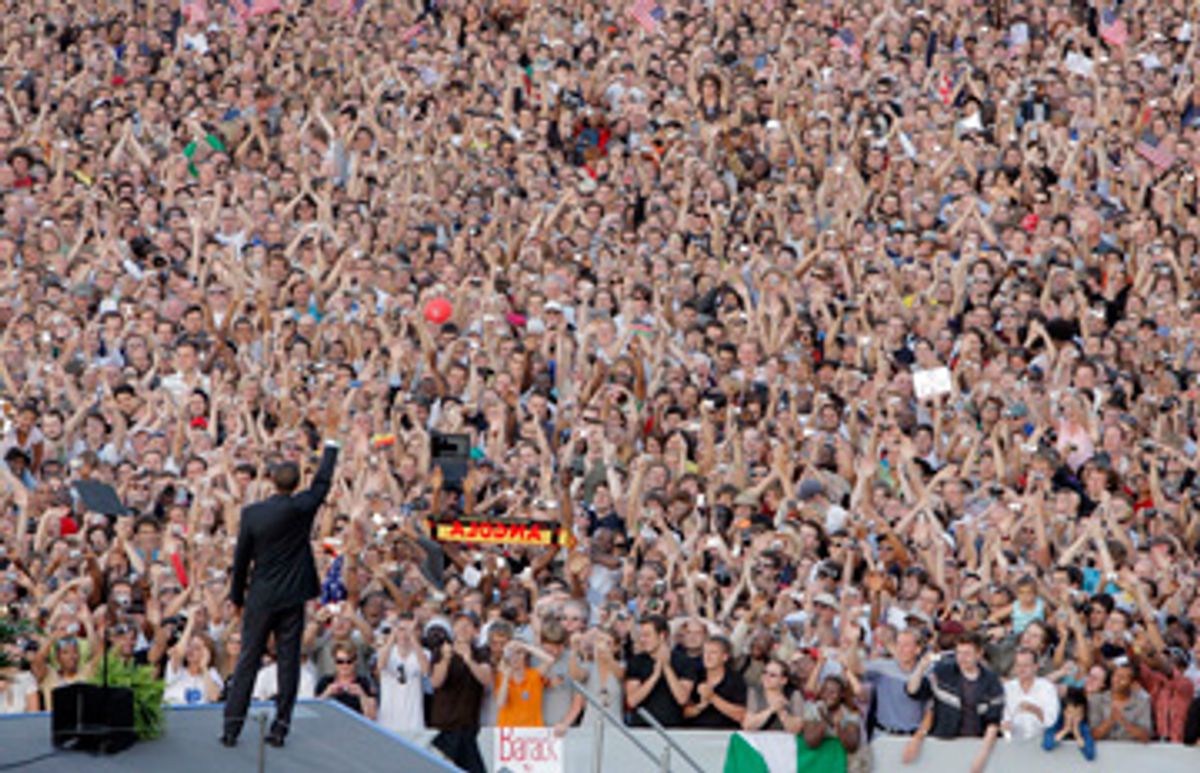 Before a cheering crowd, Barack Obama gave the speech that had been one of the most anticipated moments of his world tour on Thursday. In Berlin, Obama began his speech with a long discussion of the history of that city, using its history as a focal point of the Cold War to talk about freedom and the future.

Obama frequently repeated a theme from a speech that the former mayor of Berlin gave during the Berlin airlift -- "People of the world, look at Berlin!"

"People of the world -- look at Berlin, where a wall came down, a continent came together, and history proved that there is no challenge too great for a world that stands as one," Obama said, continuing:


Sixty years after the airlift, we are called upon again. History has led us to a new crossroad, with new promise and new peril. When you, the German people, tore down that wall -- a wall that divided East and West; freedom and tyranny; fear and hope -- walls came tumbling down around the world. From Kiev to Cape Town, prison camps were closed, and the doors of democracy were opened. Markets opened too, and the spread of information and technology reduced barriers to opportunity and prosperity. While the 20th century taught us that we share a common destiny, the 21st has revealed a world more intertwined than at any time in human history.

The speech was nonpartisan in tone, enough so that, afterward, NBC's Chuck Todd observed that there was almost nothing in it that could not have been said by John McCain. But of course, given that he was in Berlin, partisanship was not high on Obama's agenda. Instead, he talked largely in big, sweeping themes.

"History reminds us that walls can be torn down. But the task is never easy. True partnership and true progress requires constant work and sustained sacrifice," Obama said. He continued:


That is why America cannot turn inward. That is why Europe cannot turn inward. America has no better partner than Europe. Now is the time to build new bridges across the globe as strong as the one that bound us across the Atlantic ... It was this spirit that led airlift planes to appear in the sky above our heads, and people to assemble where we stand today. And this is the moment when our nations -- and all nations -- must summon that spirit anew.

This is the moment when we must defeat terror and dry up the well of extremism that supports it ... If we could create NATO to face down the Soviet Union, we can join in a new and global partnership to dismantle the networks that have struck in Madrid and Amman; in London and Bali; in Washington and New York. If we could win a battle of ideas against the communists, we can stand with the vast majority of Muslims who reject the extremism that leads to hate instead of hope ...

Sixty years ago, the planes that flew over Berlin did not drop bombs; instead they delivered food, and coal, and candy to grateful children. And in that show of solidarity, those pilots won more than a military victory. They won hearts and minds; love and loyalty and trust -- not just from the people in this city, but from all those who heard the story of what they did here.

Now the world will watch and remember what we do here -- what we do with this moment. Will we extend our hand to the people in the forgotten corners of this world who yearn for lives marked by dignity and opportunity; by security and justice? Will we lift the child in Bangladesh from poverty, shelter the refugee in Chad, and banish the scourge of AIDS in our time?

Update: Here's video of Obama's speech; you can read the address, as prepared for delivery, here.