The Obama show lands in Israel

He got a rock-star reception here, but an intriguing question lingers: Which U.S. presidential candidate is better for this country? 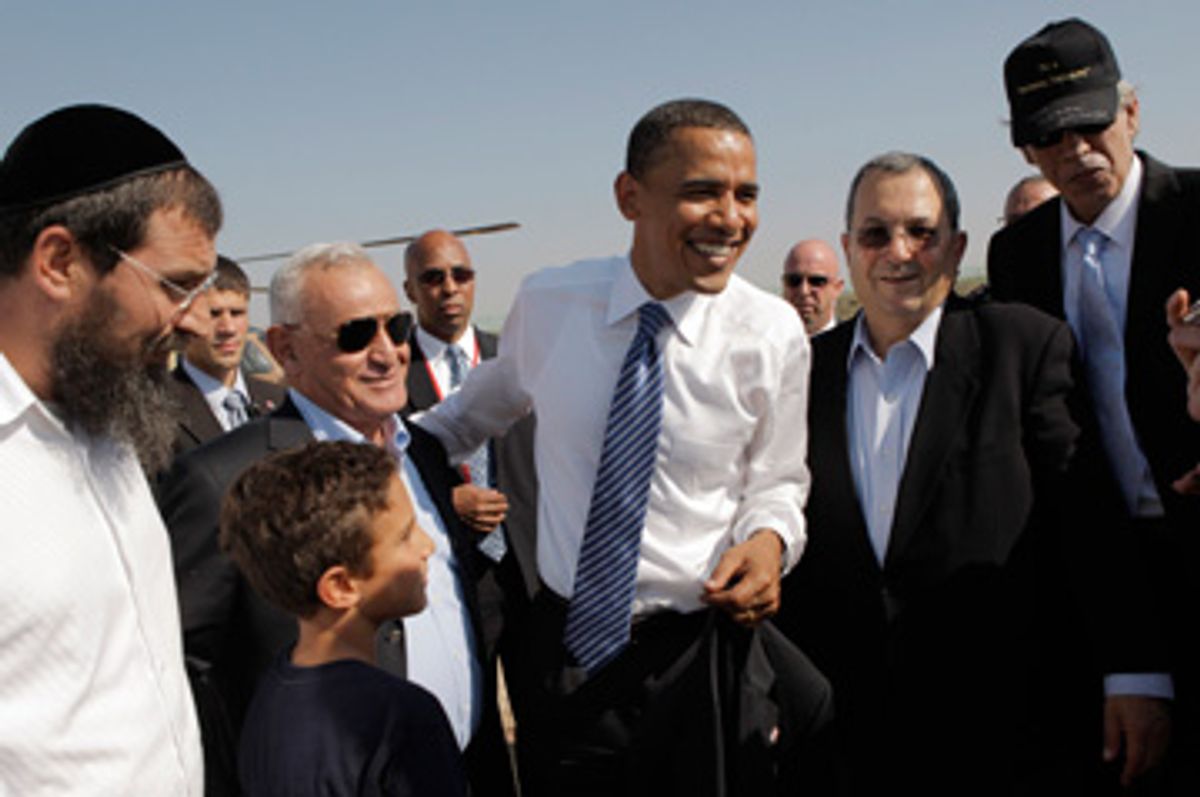 The 2008 U.S. presidential race has been marked by several historical firsts, one of which is the globalization of the campaigning. Visits to Israel and the Palestinian Authority have become part of the trail to the White House this time around; never before have the nominees from both parties visited during an election year. But this is not a typical campaign -- it's a struggle between two visions of America and its place in the world.

John McCain visited back in March but did not make much of a splash. Barack Obama by contrast, touring Israel on Wednesday, received rock-star treatment from the media. Israel's top politicians, immersed as they are in political crisis and expecting a leadership change following Prime Minister Ehud Olmert's corruption case, scrambled for a slot in Obama's 24-hour schedule.

Obama's itinerary included much of the usual for high-level foreign VIPs: visiting the Holocaust Memorial and the Western Wall in Jerusalem, calling on President Shimon Peres and Prime Minister Ehud Olmert, and making a quick visit to the Palestinian Authority's Mahmoud Abbas in Ramallah. He also took a helicopter trip to Sderot, the border town near Gaza that has been hit by thousands of Palestinian rockets in recent years. Now Sderot is quiet, thanks to a cease-fire with Hamas, but Obama had his own near encounter with local terrorism. Several hours before his arrival on Tuesday, a Palestinian bulldozer operator ran over passersby near Obama's hotel in Jerusalem. Two dozen people were wounded before the perpetrator was shot and killed.

As expected, Obama has said all the right things in terms of what the Israeli establishment wants to hear. Like any other American politician, he repeated his commitment to Israel's security and its special relationship with the United States, condemned terrorism, and pledged to prevent the Iranian nuclear threat. But while acknowledging his charm, his Israeli interlocutors seem to sense that Obama is not proficient in the nitty-gritty of Israeli-Palestinian peacemaking and does not expect any quick breakthrough toward peace. Clearly, he has more pressing issues on his foreign policy agenda; Israel's problems are way down his list, after Iraq, Afghanistan, Iran, and the economy and energy reform back home.

Nevertheless, Obama's high-profile visit here is no accident. Israel has played an arguably overblown role in the 2008 campaign, as Obama's rivals have sought to push falsehoods about his "Muslim background" (he is Christian) and his associations with known anti-Israel figures to scare away Jewish voters and other supporters. This tactic appears to have been effective. In many meetings with Jewish American visitors this year, I have heard strong doubts about voting for Obama in November. "I have never supported a Republican, but this time it's different," was a recurring theme I heard. "I have a dilemma," confided one young Jewish financier from New York. "McCain is more pro-Israel than Obama, but he will appoint conservatives to the Supreme Court, who may overturn Roe v. Wade." A tough choice for some, undoubtedly.

Mindful of the possible defection of Jewish voters to McCain, Obama's campaign has been at pains to convince the U.S. electorate that he is genuinely pro-Israel. He was pushing his message to the limits of political correctness when in June he announced his support for an "undivided Jerusalem" at the annual gathering of the American Israel Public Affairs Committee in Washington. In the charged lingo of the conflict, this term is anathema to the Palestinians, and Obama backed away from it the next day. But he kept courting Israel (as well as American supporters) by writing an Op-Ed in Israel's largest newspaper, Yediot Aharonot, for the country's 60th anniversary. He even deemed appropriate Israel's bombing last year of Syria's suspected nuclear reactor -- you can't really go much further than that as a Democrat who campaigned on his opposition to the Iraq war.

Despite all the excitement and commentary this week, an intriguing question lingers here: Which candidate would be better for Israel? Taking into account that campaigning is not synonymous with political reality, there are several possible answers to this question.

Instinctively, the Israeli establishment is warmer to McCain. His gray hair, wrinkles and combat record are key elements of the Israeli concept of leadership. Think of David Ben-Gurion, Yitzhak Rabin or Ariel Sharon. We tend to be suspicious of young, TV-savvy leaders without experience in matters of war and peace, and prefer the tribal elders. Moreover, McCain appears to be more receptive to using force, which is the usual point of contention between Israeli and Western public opinion. For these reasons, he appears like a good uncle, a follow-up to Bush's supportive eight years.

Obama offers a more exciting -- albeit more challenging -- vision to Israelis. If he can bring about a change of perception that America is once again optimistic in its strength, more accepted in the world and less dependent on oil, it would boost Israel's strategic position. But in order to get there, Obama wants -- and needs -- to be friendlier with the Europeans, Arabs and Iranians, all of whom are less friendly to Israel in various degrees. The inference, then, is that an Obama administration would pressure Israel to change its behavior and withdraw from the occupied territories and the settlements. To Israel's right wing, this amounts to an unacceptable sellout. To the left, it's fulfilling the old dream of "strong American intervention" to impose peace.

What will Obama actually do in this region, if elected? He (and perhaps even McCain) will likely try to appear more involved in Israeli-Arab peacemaking, if only to show a change from the Bush years. Dennis Ross and Daniel Kurtzer, veterans of the Israeli-Palestinian peace process, are part of Obama's entourage for this visit. Both are known supporters of active American mediation in the Middle East. But realistically, they have little room to maneuver. If they seek a potential agreement quickly under a next administration, they might try the Syrian track first. If they want to show compassion to the Palestinians, which could give America more credit across the Middle East and elsewhere abroad, they risk the usual long and frustrating path.

Ultimately, many Israelis see little difference between American presidents in terms of the U.S. relationship with Israel. Over and above personal chemistry, U.S. policy has tended to follow a basic set of rules: Whenever a key American interest is at stake -- say, when Israel is selling arms to China -- then declarations of close friendship are set aside and brutal arm-twisting is applied until Israel falls into line. If a vital Israeli interest is involved -- as in, say, the Palestinian issue, American military aid, or Israel's nuclear deterrent -- then Washington tends to follow Jerusalem's lead. When any issue falls in between, like the Iranian question, there is some give and take, but the American side essentially has the final word. Note how the Bush administration decided to talk to the Iranians recently, shattering Israeli hopes (or illusions) of an impending U.S. military attack.

This is why Israelis in general pay relatively little attention to the American campaign, and why, once the traveling Obama show moves on, the excitement will dissipate. Few here who aren't politics buffs see much difference between Democrats and Republicans, or understand the subtleties of congressional vs. presidential power. And pre-election expectations tend to be wrong: Neither Bill Clinton or George W. Bush were favorites of Israel's leaders, although both turned out to be among the friendliest presidents ever to Israel. This time, too, despite all the media attention and commentary, we will have to wait until after Election Day to really find out what lies ahead, even if the next U.S. president is the candidate who brought his historic campaign to our shores this week.