There are still risks to his big trip, but Obama has plenty of reason to be riding high on the adoring crowds greeting him abroad. 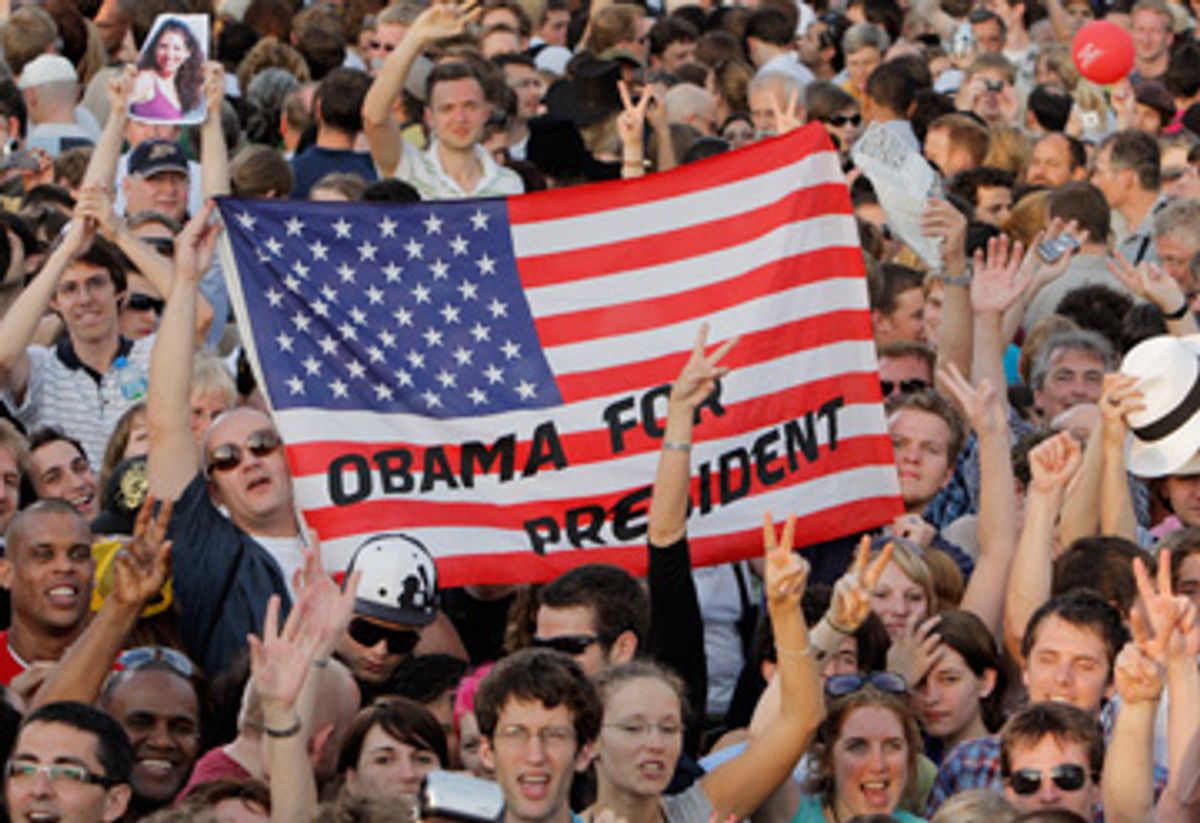 Spectators with U.S. flags cheer Sen. Barack Obama during his speech at the Victory Column in Berlin Thursday.

I know Republicans are going to try to use the cheering Berlin crowds against him, but Barack Obama made it very hard for them today. At first I was distracted by the echo in the enormous public plaza, and a little concerned about the screaming adulation of the crowd, but eventually I succumbed to the moment. To see the American flags in the crowd, and all those rapt, happy faces, was surprisingly moving to me. Even for American liberals, there must be a psychic toll to watching George W. Bush skulk around foreign capitals, where crowds, if they massed at all, would likely be heckling him.

And as someone who has occasionally felt uncomfortable with Obama's references to "our time" or to the specialness of his "movement" -- I've never liked "we are the ones we've been waiting for" -- I felt entirely different when he ran down the list of global problems to be solved, and then told the crowd: "People of Berlin -- people of the world -- this is our moment. This is our time." It is indeed all of our time, time to get the hell to work. (The full text of the speech is here.)

There are still political risks for Obama as the ripples from his trip spread in the coming days. GOP campaign ad-makers may find sound bites to clip creatively to make him look bad. (I'm a little worried about them using his meeting French First Lady Carla Bruni.) McCain and his surrogates are trying to trash Obama's parsing on an "undivided Jerusalem" and his willingness to meet with Iranian President Mahmoud Ahmadinejad, or his refusal to admit his position on the surge in Iraq was a mistake. (It's not a mistake at all, it's courageous and consistent, but too many television commentators are giving McCain points on that one, probably out of pity over his awful two weeks.)

But so far, the trip looks like political brilliance. Just as Obama's campaign hit some bumps domestically, with liberals especially criticizing him for opportunistic positions on FISA, campaign finance, gun control and the death penalty, Obama made a high-risk move, taking McCain's challenge to visit not just Iraq but Afghanistan, Israel, the West Bank and Europe. Just as we were about to see the limits of his awesome speechmaking domestically, he found a new, adoring audience for his charisma and talent. I actually don't say that to be critical (though I have criticized Obama's reliance on speechifying); it was a bold, smart move.

The only downside I can see right now is Obama being depicted as enjoying the adulation a little too much. After the speech, Newsweek's Jonathan Alter told MSNBC's Andrea Mitchell that he spoke with Obama this morning, and that "he seemed very up, very confident ... He was bragging a little bit about sinking eight out of 10 three-pointers when he was with the troops this week. He even said he felt a little sorry for John McCain this week." Alter is an Obama admirer, and presumably meant the Democratic nominee no harm, but I winced as I listened.

Still, it's hard to blame Obama if he's happy today. While he was speaking to hundreds of thousands of adoring Germans, McCain was in a Columbus, Ohio, neighborhood known as "German Village," talking about the price of groceries. His defenders are trying to make a strength out of that weakness, noting that he's home talking about the bad economy while Obama is jet-setting overseas. But the contrast of McCain's dreary visuals and out-of-touch economic proposals with Obama's grand Berlin event is likely to make people agree with Obama on one other score: It's hard not to feel a little sorry for John McCain this week.