Black and white in color

An arch, acute and haunting documentary about the segregated Mardi Gras traditions of Mobile, Ala., "The Order of Myths" might be the nonfiction film of the year. 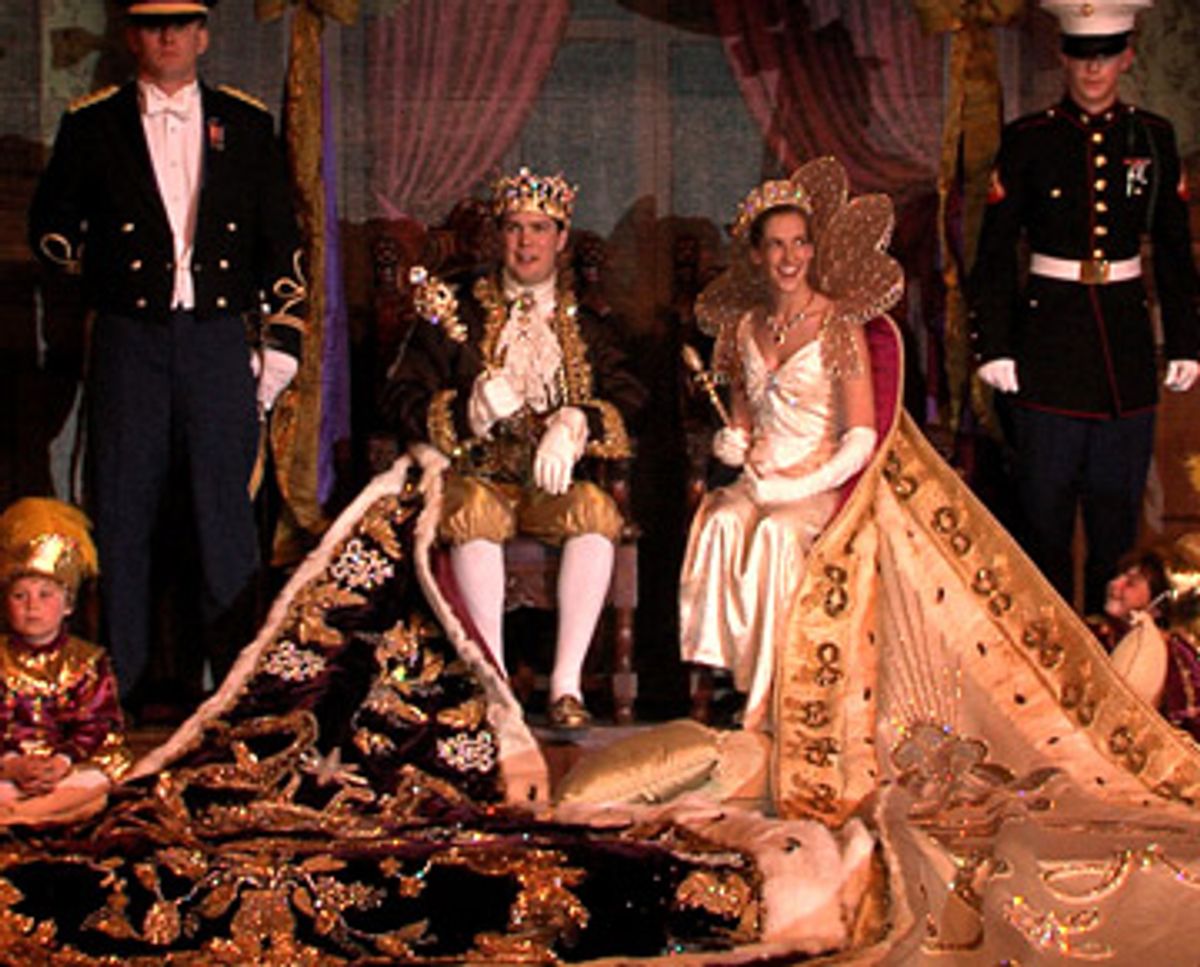 Courtesy of The Cinema Guild

The King and Queen of Mobile, Alabama's Mardi Gras, Max Bruckmann and Helen Meaher, and their court in the documentary "The Order of Myths."

Throughout Margaret Brown's moving and surprising documentary "The Order of Myths" we are assured that the Mardi Gras traditions of Mobile, Ala., remain strictly segregated because both of the city's major racial communities want it that way. Of course, it's generally white people who say that to Brown's camera, and the way they say it isn't terribly different from the way many Southern whites, in another era, talked about the Jim Crow laws.

But Brown's film is nothing if not subtle, and the fact that those sentiments spring from a racist history doesn't necessarily make them untrue. Across the breadth of Brown's compassionate portrait of Mobile's black and white Mardi Gras festivities in 2007 -- which coexist peaceably enough but rarely interact -- we come to see a city alternately puzzled, imprisoned and enraptured by its past, where people do things a certain way because they can't imagine anything else. Overt racial discrimination plays no role in Mobile today (the city has an African-American mayor, its first), but its society remains economically and geographically segregated with a rigor that rivals apartheid South Africa.

But "The Order of Myths" is not some Yankee carpetbagger's exposé on the lingering effects of Deep South white supremacy, although they are as inescapable as the Gulf Coast humidity. Brown is a white Mobile native, with a personal connection to the city's Mardi Gras history that is revealed late in the film. She views Mardi Gras in Mobile -- it's the oldest such tradition in America, because the city was founded before New Orleans -- with a combination of ruthlessness and tenderness. She moves effortlessly from upper-crust social clubs (where the only black people wear white dinner jackets and have napkins over their arms) to African-American churches and storefront photography parlors.

In Mobile, certain kinds of Faulknerian detail that might astonish outsiders just come with the territory. The white Mardi Gras queen in 2007 is a petite, drifty young woman named Helen Meaher, whose ancestors were slave owners and traders and whose family still controls most of the land in an all-black, semi-rural area called Africa Town. The district's name goes all the way back to an illegal slave ship brought into Mobile Bay by the Meahers in 1859 (after the importation of new slaves had been banned), whose human cargo scattered into the untracked woods thereabouts. During the course of the film, Stefannie Lucas, a vivacious, zaftig Mobile schoolteacher who is the 2007 black Mardi Gras queen, learns that her great-grandfather was aboard that ship.

On both sides of the Mobile Mardi Gras divide, people seem to be edging toward a desire for reconciliation, but there remain significant differences about what that might entail. Some African-Americans in the film seem almost painfully eager for the esteem and approval of whites, while one black preacher delivers an eloquent address in which he says that his black community does not seek financial reparations for the past but rather "a change of heart." It is not clear how much the cosseted, isolated, privileged world in which Helen Meaher and her consort Max Bruckmann (aka Emperor Felix III, Lord of Misrule) have been raised is likely to change.

Not that there are no rays of light amid the wry, rich historical lessons of "The Order of Myths. Lucas and the African-American Mardi Gras king, Joseph Roberson (also a teacher in the city's all-black public schools), attend Meaher and Bruckmann's coronation ceremony, and are received with pomp and courtesy. The white king and queen reciprocate by attending Lucas and Roberson's ball, where they dance the night away in the finest tradition of awkward white kids at a black party. It's a bittersweet climax to a film that gazes deeply into the racial tragedies of Mobile and Alabama and the South and America without finding any resolution -- but the sweet, for those few moments, outweighs the bitter.

"The Order of Myths" is now playing at the IFC Center in New York, and opens Aug. 8 at the Nuart Theatre in Los Angeles, Aug. 15 in Mobile, Ala., and Sept. 5 in San Francisco, with more cities to be announced.